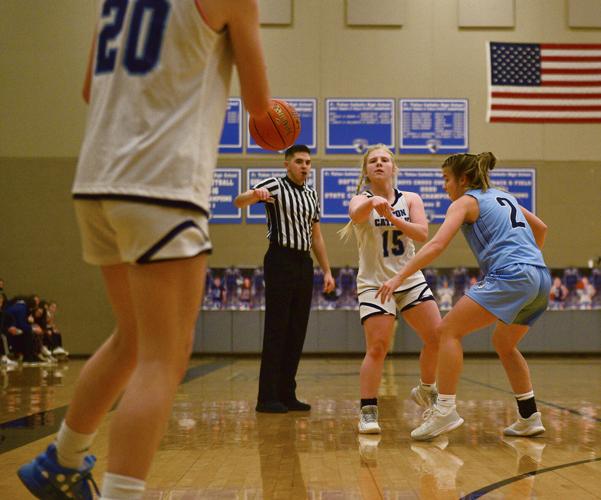 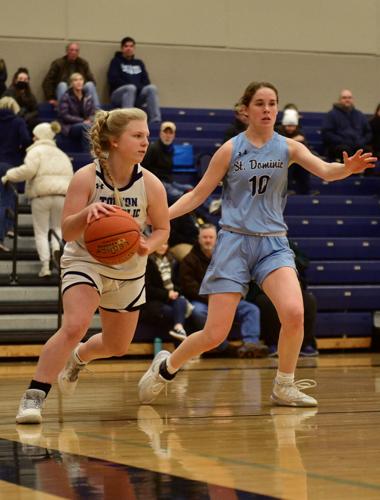 Tolton’s Sophie Angel drives to the basket on Thursday in Columbia. The Trailblazers worked up a bit of foul trouble, with Angel up to three fouls in the first half. 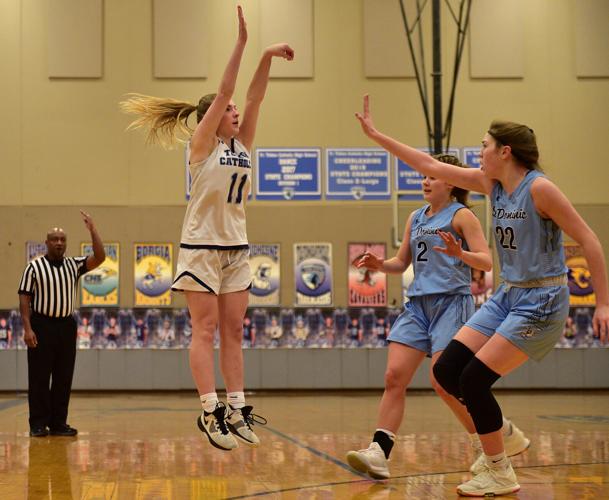 Tolton’s Jillian Aholt shoots Thursday in Columbia. Tolton will next compete in the Harrisburg Tournament. 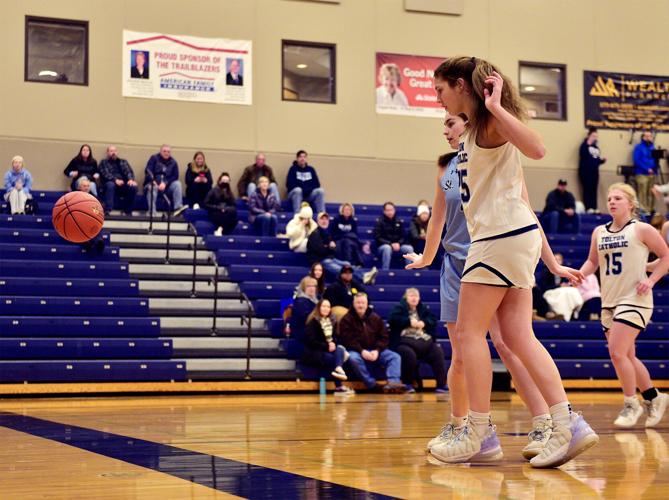 Tolton forward Sadie Sexauer watches the ball bounce out of bounds on Thursday in Columbia. The Trailblazers played a competitive game, leading 15-14 at half time, but the St. Dominic Crusaders eventually closed the gap.

Tolton’s Sophie Angel drives to the basket on Thursday in Columbia. The Trailblazers worked up a bit of foul trouble, with Angel up to three fouls in the first half.

Tolton’s Jillian Aholt shoots Thursday in Columbia. Tolton will next compete in the Harrisburg Tournament.

Tolton forward Sadie Sexauer watches the ball bounce out of bounds on Thursday in Columbia. The Trailblazers played a competitive game, leading 15-14 at half time, but the St. Dominic Crusaders eventually closed the gap.

Tolton girls basketball had a celebratory mood prior to tipoff and for the first three quarters. But the concoction for a perfect senior night celebration was spoiled by foul trouble and a fourth-quarter comeback to fall 43-36 against St. Dominic on Thursday night.

Prior to tipoff, as four Trailblazer seniors — Sophie Angel, Lexi Ash, Brooklyn Coolley and Ellie Reynolds — partook in senior night festivities, which coach Sam Sexauer concluded with a speech to commemorate the class of 2022.

“I asked them at the beginning of this year when I took over to make this their team, to make this theirs, not anybody else’s because this is your last chance to go out with a bank, whatever that looks like,” Sexauer said. “It doesn’t have to be with wins and losses. It could be with just them going out there and enjoying themselves and having a great time playing the game of basketball.”

The players and fans were enjoying themselves early, as Tolton looked poised to make its biggest statement win of the season with a strong start to the contest.

Both teams opened the contest with an effective 2-3 zone, and baskets came few and far between through the opening quarter. Most possessions ended in a turnover, held ball or a blocked shots, as Ash’s 3-pointer and Sadie Sexauer’s jumper served as the only two made field goals from either side in the first eight minutes.

The defensive slugfest favored the Trailblazers in the early going, as Tolton held St. Dominic scoreless for the first 11 minutes of action, opening on an 11-0 run.

But once the fouls started to add up for Tolton, the game flipped course.

Despite forcing a lot of turnovers in the zone defense, St. Dominic found its center Maren Hunt in the low post, where the aggressive defense came back to bite the Trailblazers. Hunt alone racked up eight of her team’s 14 free throw attempts in the second quarter.

The Crusaders only made five of those shots, but as more fouls piled up for Tolton, St. Dominic took advantage.

By the end of the half, Angel and Reynolds accumulated three fouls apiece while Sexauer and Eva Viox each picked up two. The early fouls proved detrimental toward the end of the game, as Reynolds and Sexauer both sat midway through the fourth quarter with four fouls.

At game’s end, both players fouled out as St. Dominic closed out on an 8-0 run.

The Crusaders needed a half to get settled at the free throw line, but the final 16 minutes were an inverse of the early shooting struggles. St. Dominic shot 12-14 from the stripe in the second half, as free throws totaled 11 of the Crusaders’ 18 fourth-quarter points.

After playing a near spotless third quarter with just one foul, Tolton slowly started to pick up more fouls until St. Dominic reached the bonus with just under three minutes remaining.

“I didn’t agree with many of the foul calls, but we talked about sagging off the perimeter because they were getting most of their points in the paint,” Angel said.

The adversity like Thursday’s game is nothing new for this group of seniors. Seniors such as Reynolds and Angel have grown as leaders in the midst of a constantly changing landscape within the girls basketball program at Tolton.

“(The biggest thing is) definitely the family aspect because we’ve had four different changes of coaches in the past four years, so just sticking with your teammates has been a big thing over these last four years,” Reynolds said.

With the Harrisburg Tournament next week, Sexauer said he looks for those games to be an opportunity to regain momentum heading into the home stretch of the regular season.

Tiger Woods says he's all about majors, a Mickelson rebuke

Spoelstra, Udoka have Heat and Celtics ready for East finals