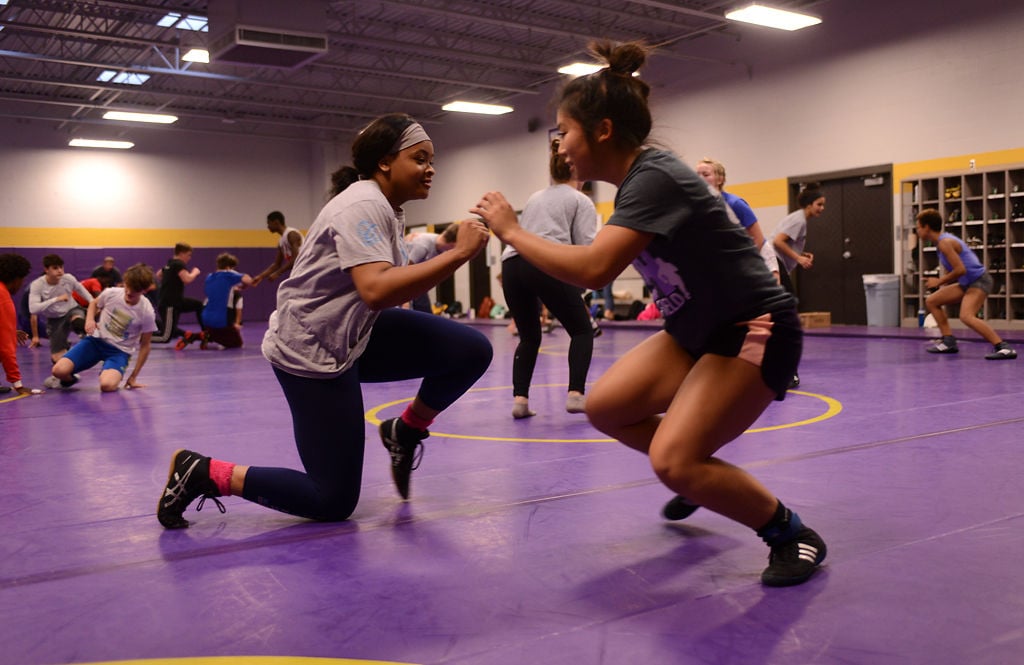 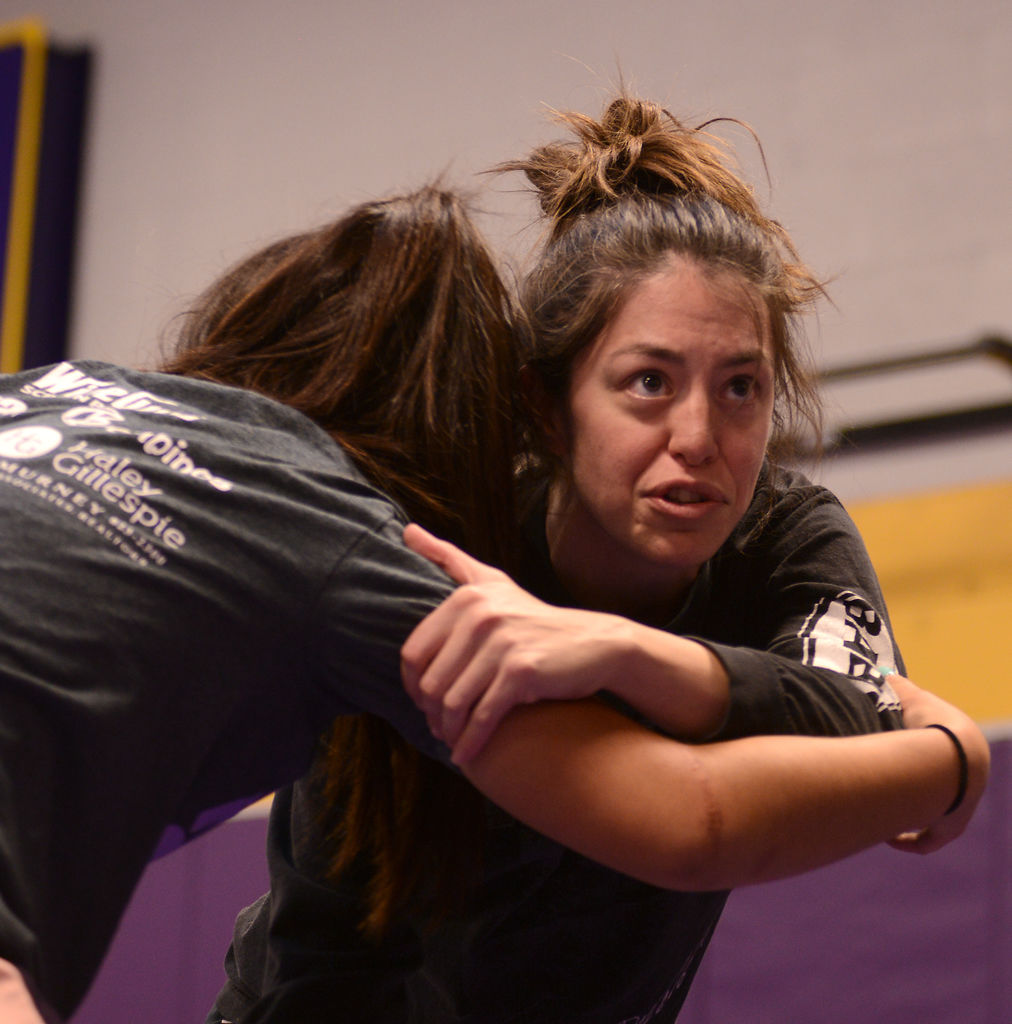 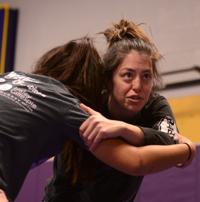 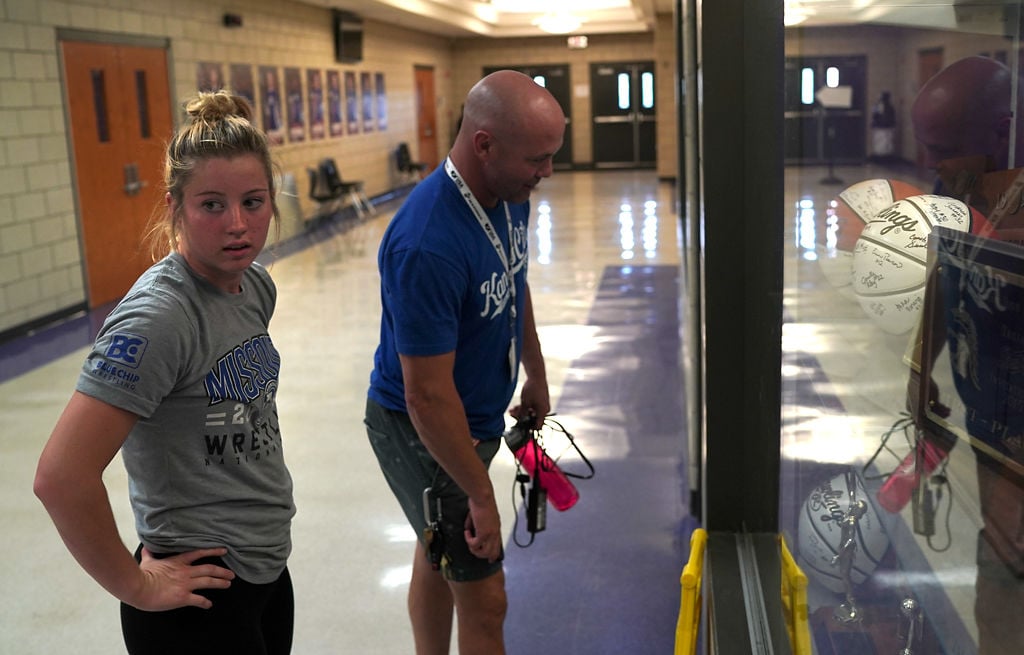 Hickman High School assistant wrestling coach Steve DeVenney and wrestler Belle Harrell look at past championship trophies at Hickman. Harrell is the most experienced member of the girls wrestling team. 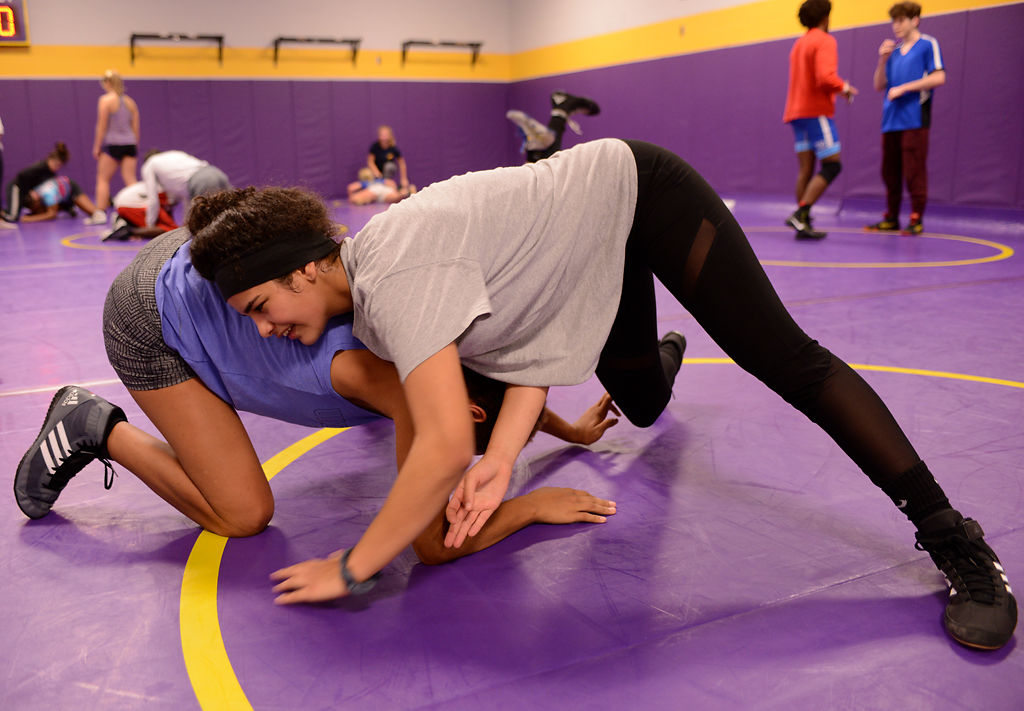 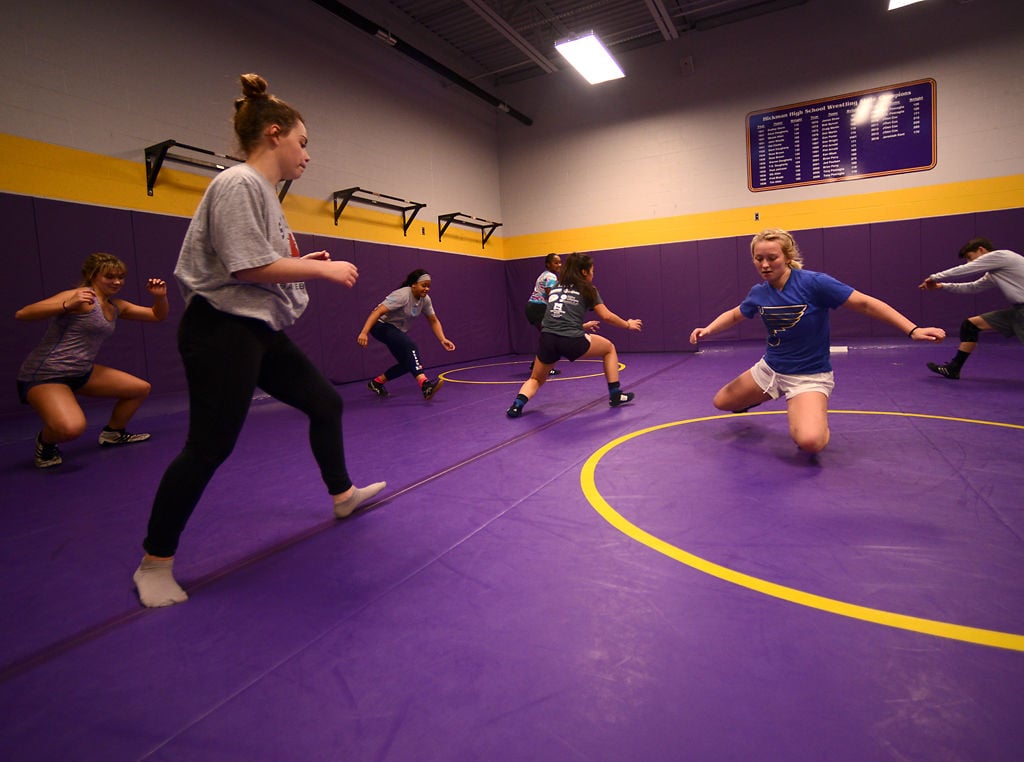 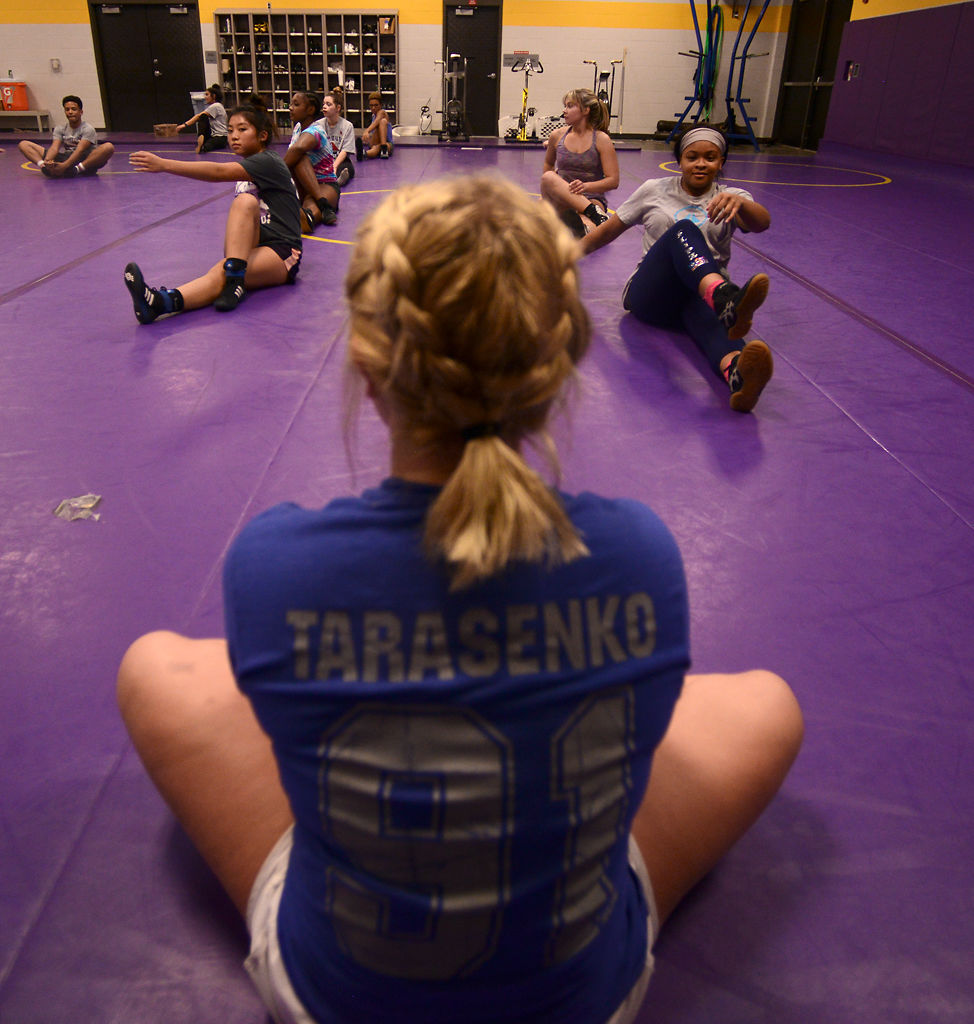 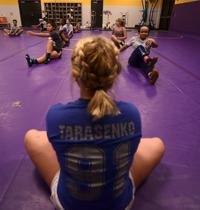 Hickman High School assistant wrestling coach Steve DeVenney and wrestler Belle Harrell look at past championship trophies at Hickman. Harrell is the most experienced member of the girls wrestling team.

Harrell, who transferred to Hickman this year, will be a member of the Kewpies’ first girls wrestling team. As of the 2018-19 season, girls wrestling is now a Missouri State High School Activities Association sponsored sport, which means there will be separate district and state tournaments for boys and girls.

If she qualifies for state this season, Harrell will not wrestle a male opponent.

At last season’s state tournament, the first of her three matches was against a previous state champion; Harrell lost but had him on his back for a minute and a half, almost the entire first period.

“The ref wouldn’t give me the pin,” Harrell said. “He was the returning champ, and (maybe the referee) didn’t think he deserved to get beat by a girl — I have no clue. It makes me very angry. ... Even the kid’s coach goes up to you and was, like, ‘He was pinned.’”

But Harrell won her second match, a close one in the first round of wrestlebacks. She and her opponent from Lutheran St. Charles were nearly even going into the third and final period.

Harrell wasted no time, immediately going on the offensive to start the period.

“I got him on his back and pinned him, and everyone just went crazy,” Harrell said.

Harrell, a junior who describes her wrestling style as “funky” and “spontaneous,” is not finished wrestling boys. For a two-year transition period, girls can still wrestle male opponents during the regular season.

This goes out the window when the postseason arrives. According to MSHSAA’s girls wrestling implementation plan, girls are required to wrestle in the girls district and state tournaments even during the transition period.

Harrell has been wrestling since seventh grade, making her the most experienced wrestler on Hickman’s inaugural girls team, which is one of many in Missouri being formed this year. Battle and Rock Bridge will also have girls wrestling teams this year, while Tolton will not.

“It’s pretty hard for me to contain my excitement for it, to be honest with you,” Stahl said.

The addition of a separate team will be “a complete different shift in how the program will actually go forward,” said Dan Pieper, Hickman’s head boys and girls wrestling coach.

“To me, it’s a testament to the females in this state, how well they’ve grown and how much work they’ve put into the sport to show MSHSAA and to show others that this is needed,” Pieper said.

Harrell will be the team’s starting wrestler in the 120-pound weight class. Even though Hickman has had girls wrestle in the past, including three last year, Harrell will be the first girl in Hickman wrestling history to compete for the varsity boys lineup.

“I’ve never even thought about it,” Harrell said. “I mean, I was Macon’s first girl (to wrestle for the school). I think it’s actually really cool because (Hickman) is a huge school, so you’d think, ‘Oh, they must have had a really good girl wrestler somewhere.’ But I guess not.”

Jake Waldron, a sophomore varsity wrestler at Hickman who also competed at the state tournament last season, can vouch for Harrell’s talent. He’s experienced it firsthand in a number of practices.

“She said she could beat me if I was lighter,” Waldron, who plans to compete at 138 pounds this season, said. “Probably. She’s just got really crazy moves that I don’t know about. So she can teach me a couple things, too.”

Waldron said wrestling a girl from another school can be awkward, but a girl on Hickman’s team will be like “one of the guys, basically.” There were 12 girls at a recent Hickman practice, which is what Pieper originally expected.

The Hickman boys and girls teams will train together all season. Similar to how Pieper has coached his boys teams in the past, the students with less experience will train with each other as they get used to wrestling.

Hickman began its season’s practices on Oct. 29. At one recent workout, assistant coach Steve DeVenney pulled the team together before warmups started.

The team — 12 girls and about 25 boys, all wearing shorts and T-shirts — sat together on the wrestling mats and faced DeVenney. Harrell braided a teammate’s hair while the rest gave DeVenney their attention.

“There’s no girls or guys team,” he told them. “There is a team. We’re all the same. We’re all wrestlers.”

At the end of his pre-warmup meeting, DeVenney told the team they likely would get out of practice on time.

“That is, if you don’t give a three-hour speech,” Harrell joked.

The whole team erupted. Shouts of “Ohhh!” echoed across the room.

“Six lines,” was DeVenney’s response; the wind sprints spoke for themselves. Including coaches, the whole team ran as a result of Harrell’s joke.

Harrell said afterward that DeVenney is like a father to her and that she likes to give him trouble.

Harrell’s teammates come from all backgrounds. Hickman freshman Danya Kassem is coming to wrestle after competing against boys and girls in jiu-jitsu for seven years.

“I asked the other girls, ‘Are you comfortable with wrestling with guys?’” Kassem said. “And they’re like, ‘No, I’m not really interested.’ Coming from jiu-jitsu, I do jiu-jitsu with guys, and I compete with guys all the time.”

There are aspects of this new two-team structure that required attention. One was the locker room. Another was the need for a role model for the girls, someone who had been in their shoes.

Hickman’s answer to both concerns is Andrea Whitney. Whitney wrestled in high school and college before fighting in 18 mixed martial arts bouts. She acknowledged that some of the girls new to wrestling are timid at first, but their drive to learn eventually outweighs their worries.

“Having an older female voice that has been through wrestling, been through competitions, and (someone) for them to look to and look up to ... hopefully, I can be that person to give them inspiration to keep going with it,” said Whitney, who was a volunteer assistant coach last season for the three girls who wrestled for Hickman.

Whitney will be the main coaching presence in the girls locker room.

The girls will wrestle folk-style under the same rules as the boys, as determined by the National Federation of State High School Associations. Folk-style wrestling is common in the U.S. and is similar to freestyle wrestling.

The new set-up will make wrestling more competitive for girls, Hickman athletic director J.D. Coffman said. Coffman was an assistant wrestling coach for the Kewpies for three years before he took over as head coach from 2004 to 2013.

He coached five or six girls over the span of his time with Hickman wrestling, but only two or three made it through the whole season.

“The physical development of (freshman girls) may be a little ahead of some of our (freshman boys), particularly at the lighter weights,” Coffman said. “And that’s where we’ve seen a lot of the girls competing.”

MSHSAA will determine the breakdown of weight classes for girls wrestling and is expected to release them this week. Each girl will go through a weight assessment, which male wrestlers also do every year.

Weight classes for girls wrestling will be revisited in the sport’s second year, the 2019-20 season, and MSHSAA will move toward more permanent classes in the third season. There are expected to be 10 weight classes this season.

Pieper said he plans to take the girls team to as many tournaments as he can. As of this week, 33 girls wrestling tournaments or girls divisions at already-existing tournaments are scheduled for this season, Stahl said.

If we build it, they will come

“We can’t see how it’s going to go unless we step off the plank a little bit and throw it out there for them to give it a shot,” Stahl said.

Eric DeVenney, president of the Missouri Wrestling Coaches Association and brother of Hickman assistant coach Steve DeVenney, said he’s aware of girls who are interested in wrestling but don’t want to wrestle boys. Many parents have been opposed to their daughters wrestling the opposite sex, too.

Eric DeVenney acknowledged some pushback, mostly from coaches and officials. He said the pushback is “nothing really negative” — most of it stems from skepticism about whether girls will want to participate.

The number of girls in high school wrestling has increased from 804 in 1994 to 16,562 in 2018, according to the National Wrestling Coaches Association.

The NWCA lists 13 states, including Missouri, as sponsors of girls wrestling at the high school level.

But before they metaphorically built it, Harrell had already come to wrestling. She has been wrestling since middle school and placed seventh among 68 at the Halloween-themed Freakshow national competition in Las Vegas this October.

Knowing this — and speaking from the personal experience of wrestling her in practice — Whitney speculated there could be a college wrestling future for Harrell.

“She counters very well, and she’s very, very good technically,” Whitney said. “She doesn’t try to muscle everything. She uses her technique and moves very well, kind of uses your strengths against you and counters against your mistakes.”

Hickman knows it has something special in Harrell and a strong future in girls wrestling, especially now that it’s MSHSAA sponsored.

“She will be a great role model for other girls that come out and compete to see what they can achieve and where the potential might be,” Coffman said.

After MAC surrenders to pandemic, will other leagues follow?

A look at NFL training camps in a most unusual preseason

Blues get 2 p.m. start against Dallas, will face Calgary or Vancouver in Round of 16