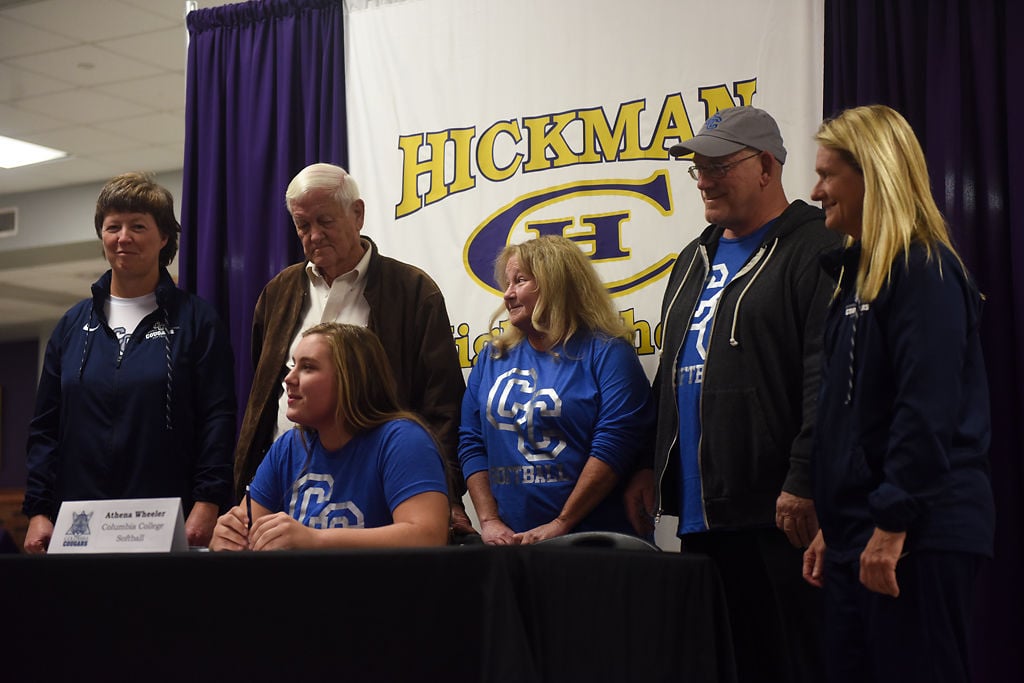 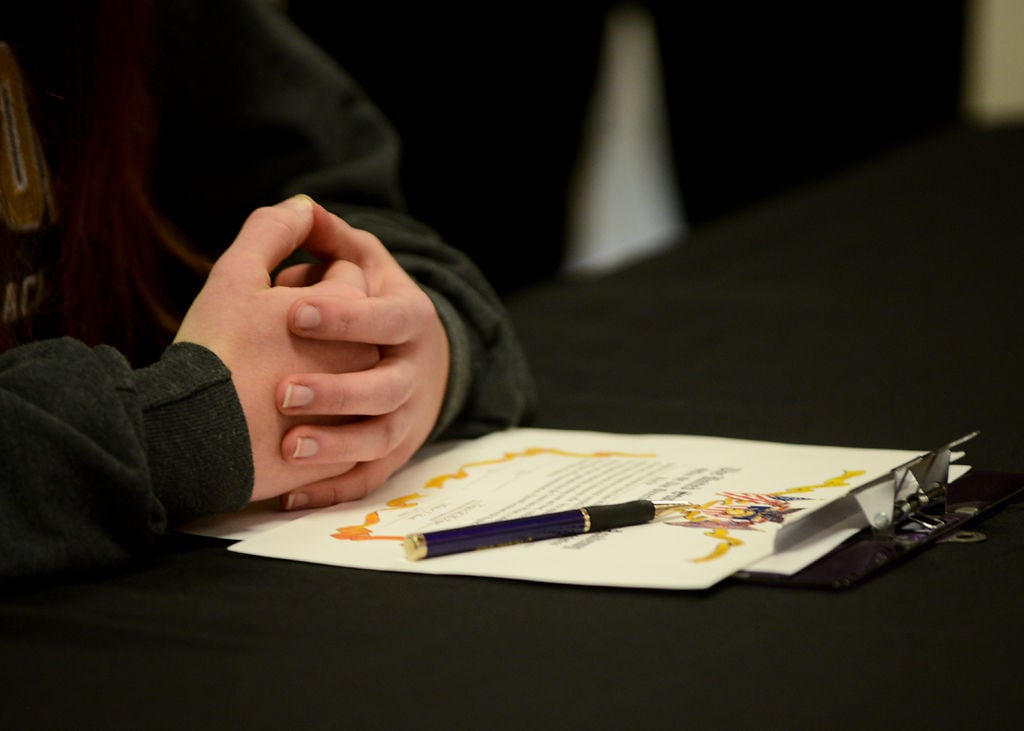 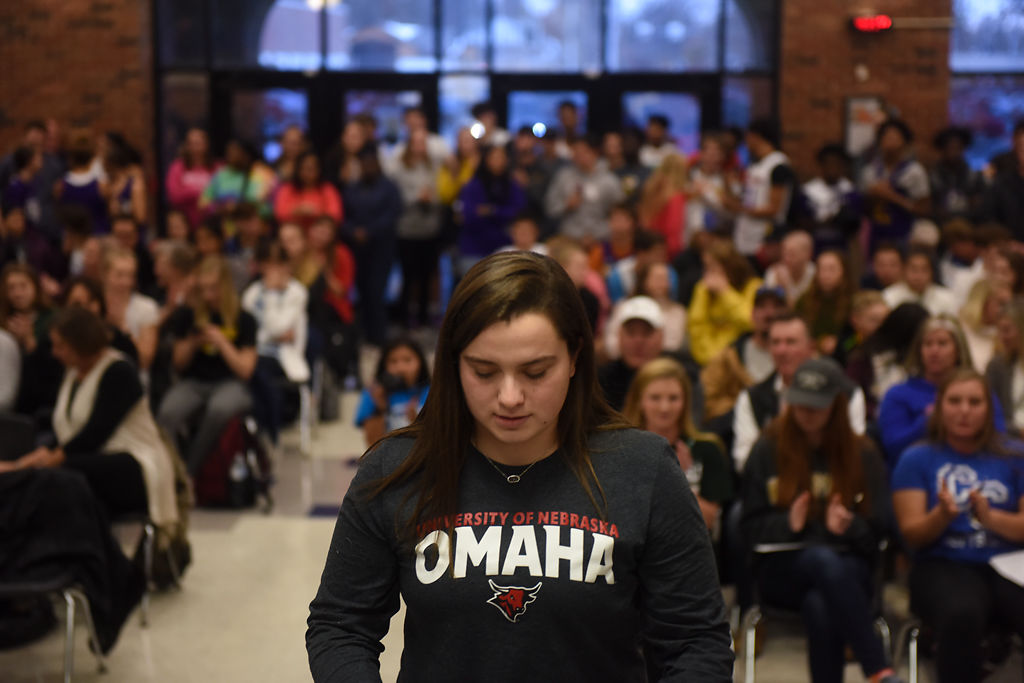 Hickman senior Camille Lease walks up to the table to sign her national letter of intent Wednesday at Hickman High School.Lease signed for the swim team at the University of Nebraska Omaha. 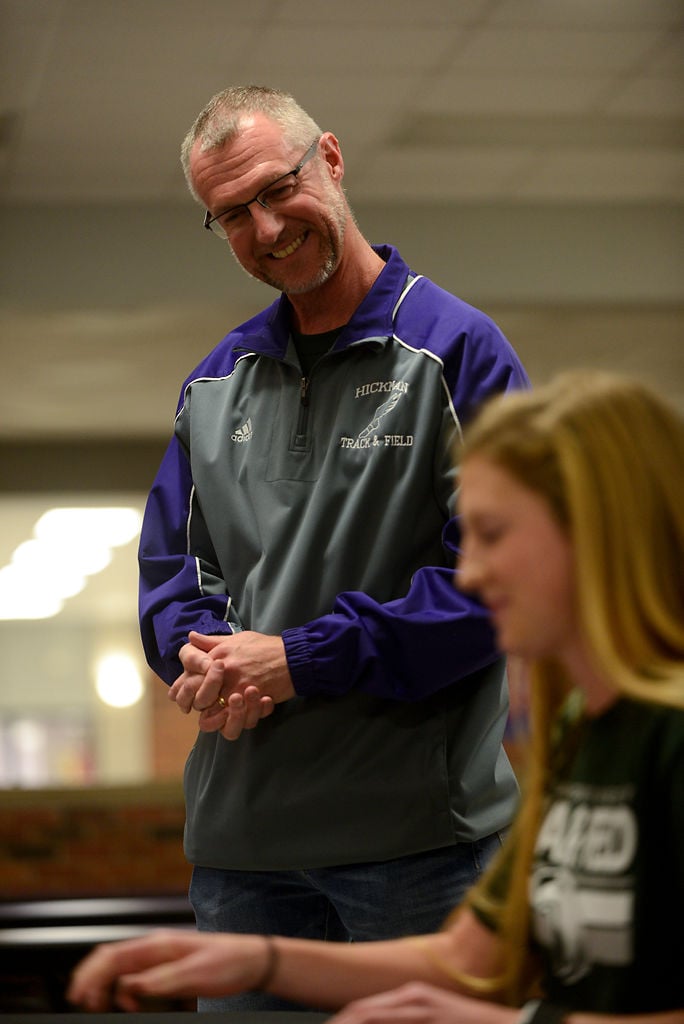 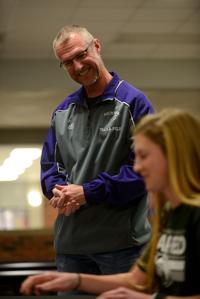 Hickman senior Camille Lease walks up to the table to sign her national letter of intent Wednesday at Hickman High School.Lease signed for the swim team at the University of Nebraska Omaha.

It’s the most wonderful time of the year for seven Hickman student-athletes.

Family, friends and coaches all crowded the commons area at Hickman High School to see the students sign their national letters of intent on Wednesday.

Tears were held back, laughs were shared and memories were made as the seven girls from softball, swimming and track and field all made their collegiate commitments official by putting pen to paper.

The four softball players announcing their next destinations are all headed to different places. First baseman Brooke Green will continue her career at William Jewell. Hickman softball coach Courtney Haskell said that Green left her mark on the school and worked extremely hard to become the player that she is today.

“Every year was just a little bit different, but I could see her mature and how she handled situations,” Green’s mom, Francie, said. “I was able to watch her grow into this really strong athlete and a really strong woman as well.”

“Courtney and Nick (Haskell) are by far my favorite coaches I’ve ever played for. They are the most dedicated and hard working and caring people I’ve ever met,” Brooke Green said. “There’s not one time that they’ve never been there to help coach me, not only through life, but through the sport. It was a really, really fun four years to play for them.”

Brooke knew William Jewell was the place for her as soon as she stepped foot on its campus and is looking forward to making new friends, meeting the other freshman softball players and playing for a new team.

She also thanked her parents for taking her all across the country to compete in tournaments.

Emily King was next and signed her NLI to McKendree University in Lebanon, Ill. She finished her career at Hickman batting .369 and is regarded for her versatility. She played shortstop for three years before finishing her career as a catcher.

Avery Throckmorton committed to Jefferson College, located in Hillsboro. Haskell noted that Throckmorton isn’t afraid to run into fences and will lay out for any ball, whether it’s close to her or not.

Closing out the softball commits was Athena Wheeler, who is staying close to home, announcing her intentions to play at Columbia College.

Wheeler has only played competitive softball since she was 13 and with plans to become a teacher, Haskell said she has all the tools to become a great one.

“It’s one of the most exciting days of all our lives. She’s worked so hard and so long for this day,” her mom, Lisa Phillips, said. “It truly did take a team to get her to this point, but nobody could replace the hard work that she put in.”

Phillips said the only input she had in her daughter’s decision was doing laundry, feeding her healthy meals and providing transportation until she turned 16. She noted that keeping the white uniform clean was a challenge and that she learned about oxygen bleach early.

“I’m really happy for them. I’m proud of them and proud to be able to say they’ve been a part of my life for four years. I’m excited to see what great things they’re going to accomplish,” Haskell said. “I love all of them.”

Two athletes for track and field followed by announcing their college choices.

The first word Hickman track and field coach Stewart Johnson said that came to mind about Karly Parcell was service and there’s no better word that fits her, as she signed her NLI with the United States Military Academy at West Point.

Parcell has qualified for state in all three years so far and is a two-time medalist. She also holds the all-time discus throwing record, tossing it 143 feet and 2 inches.

Johnson said he tells his parents that he treats all of his athletes like they’re his children, but the next person to sign is actually his child. Kailey Johnson announced her intentions to continue at Central Methodist.

She’s earned varsity letters in four different sports during her time at Hickman. Stewart referred to her as a Swiss Army knife because she did anything and everything that was asked of her.

“It’s awesome getting to see her get her dream fulfilled. She’s put a lot of hard work in and to see it pay off is just cool stuff,” Stewart said. “Icing on top of the cake.”

Rounding out Wednesday’s commits is Camille Lease. The swimmer signed to the University of Nebraska-Omaha, and while coach Taylor Birsa wasn’t able to make it, she said in a letter that the Durangos are gaining a great student, swimmer and dancer.

“It was really moving (seeing Camille sign),” her dad, Kevin, said. “I was trying not to cry.”

He said that she wanted to swim at a Division-I school and wants to be a teacher. The university she chose fits both of those criteria. He also said that while he’s going to miss her, he’s looking forward to hearing about her new friends and experiences.

Athletic director J.D. Coffman said that any athlete at Hickman who continues an athletic career in college has excelled, and he expects nothing less from this group.

The Miracle on ... Hardcourt