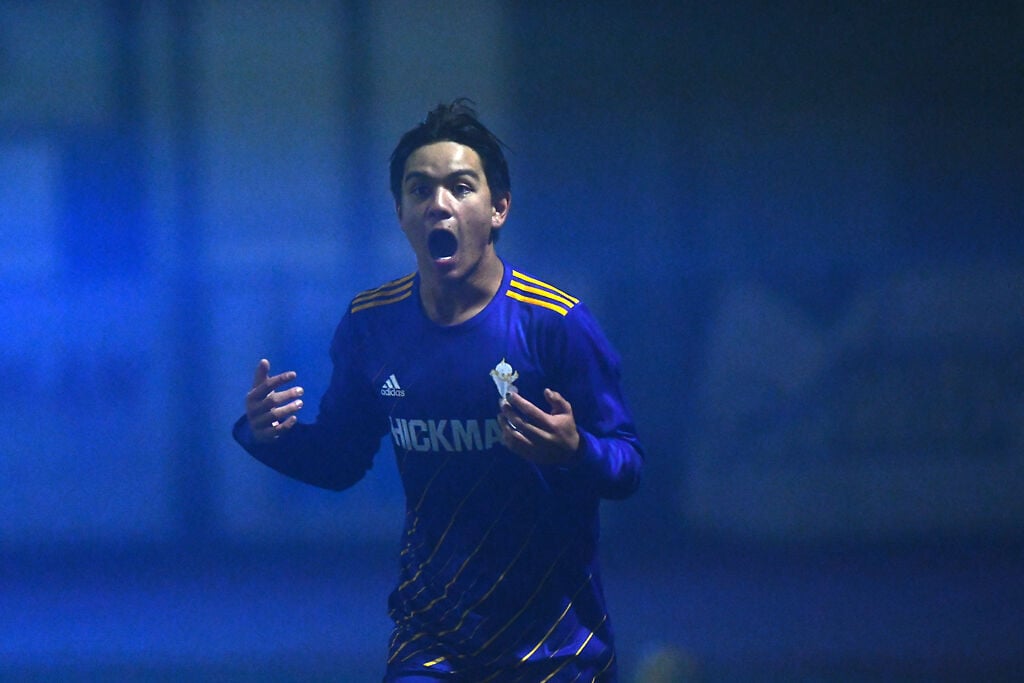 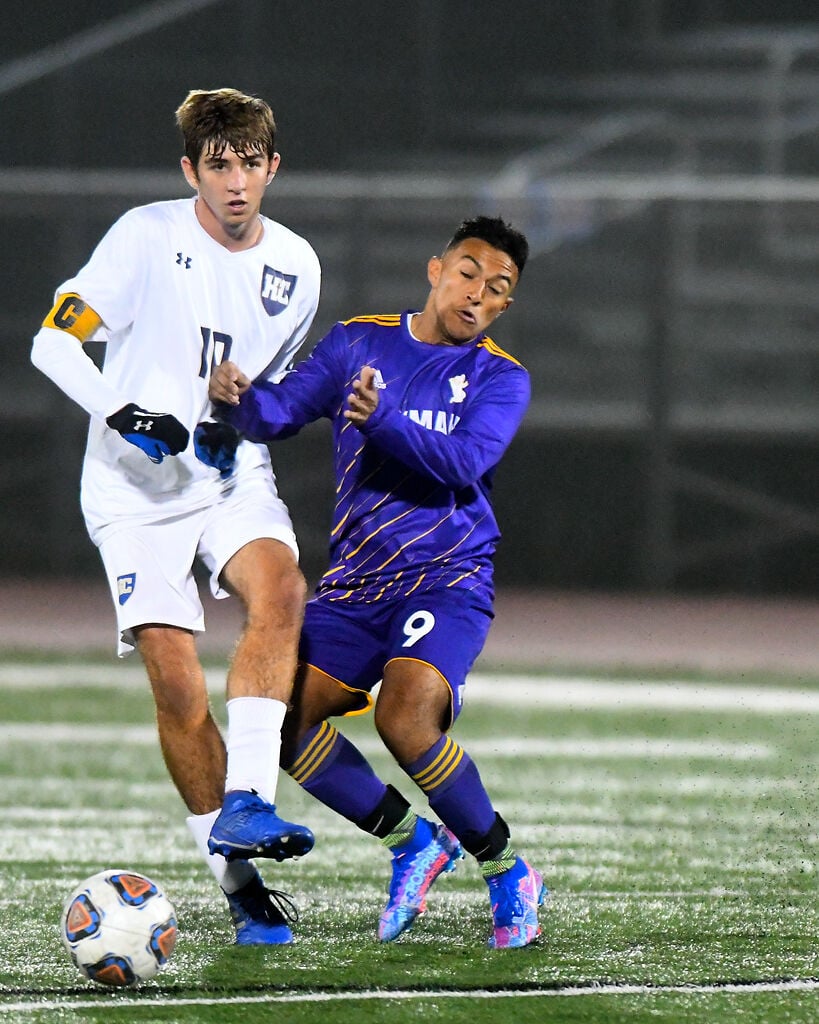 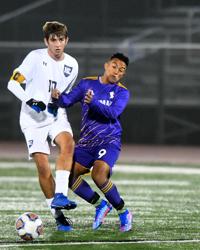 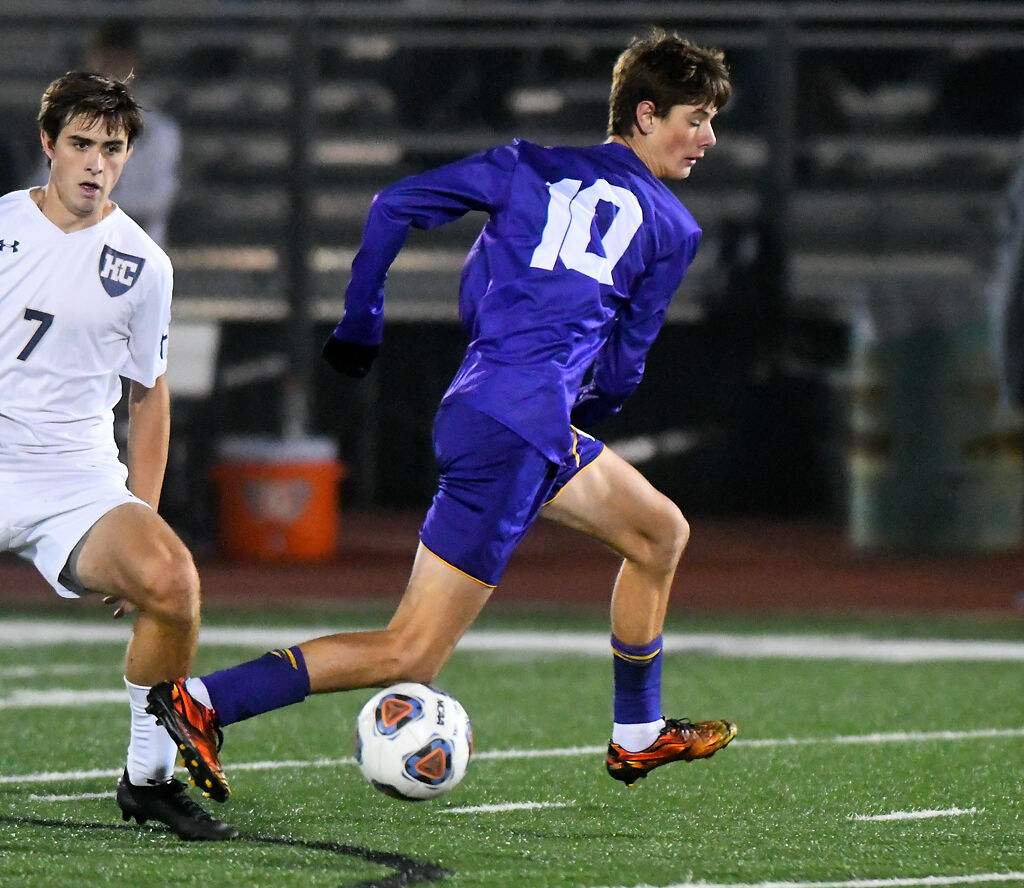 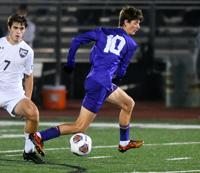 From left, Helias forward Luke Hynes and Hickman midfielder Ilhan Dervisevic scramble to get the ball on Wednesday in Columbia. Hickman beat Helias 1-0. 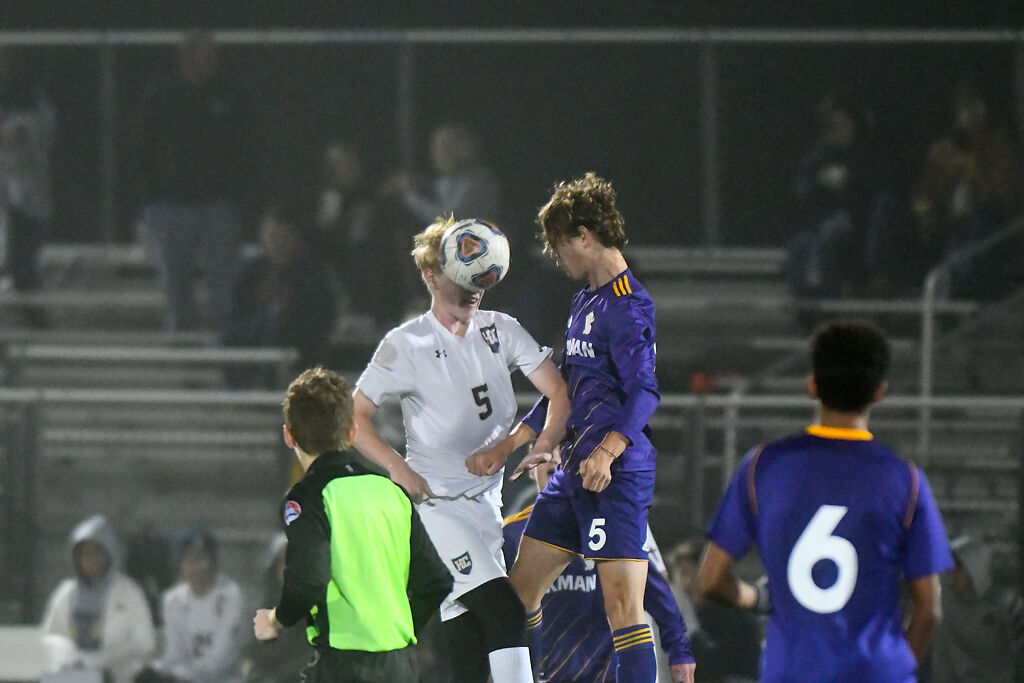 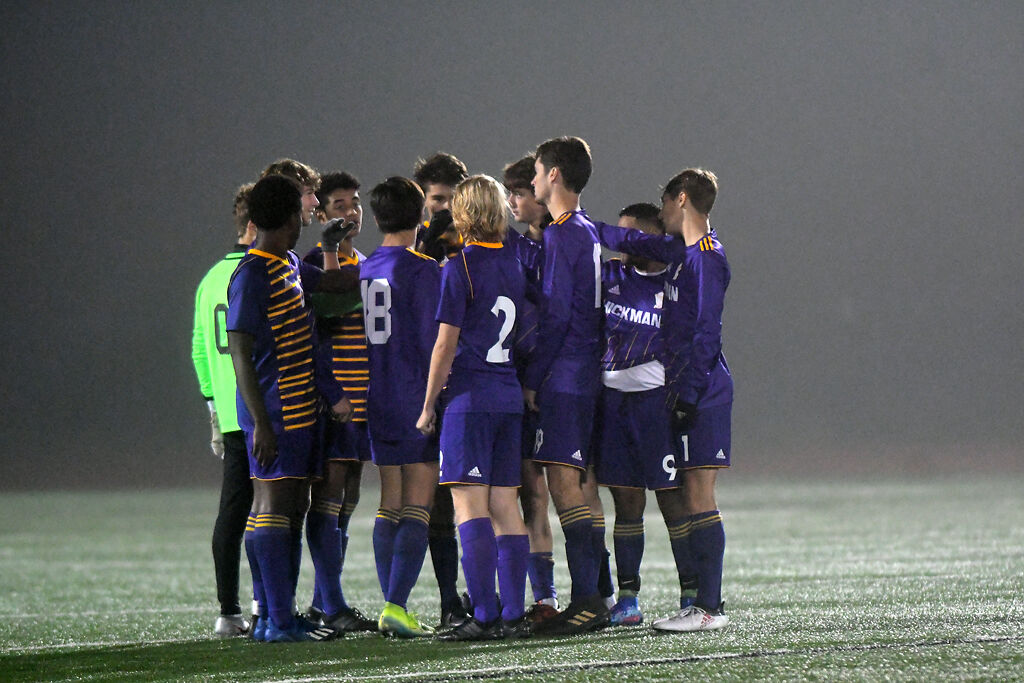 The Hickman Kewpies huddle before the start of their game against the Helias Crusaders on Wednesday in Columbia. The only goal of the game was by Hickman's Skip Smale-Murillo. 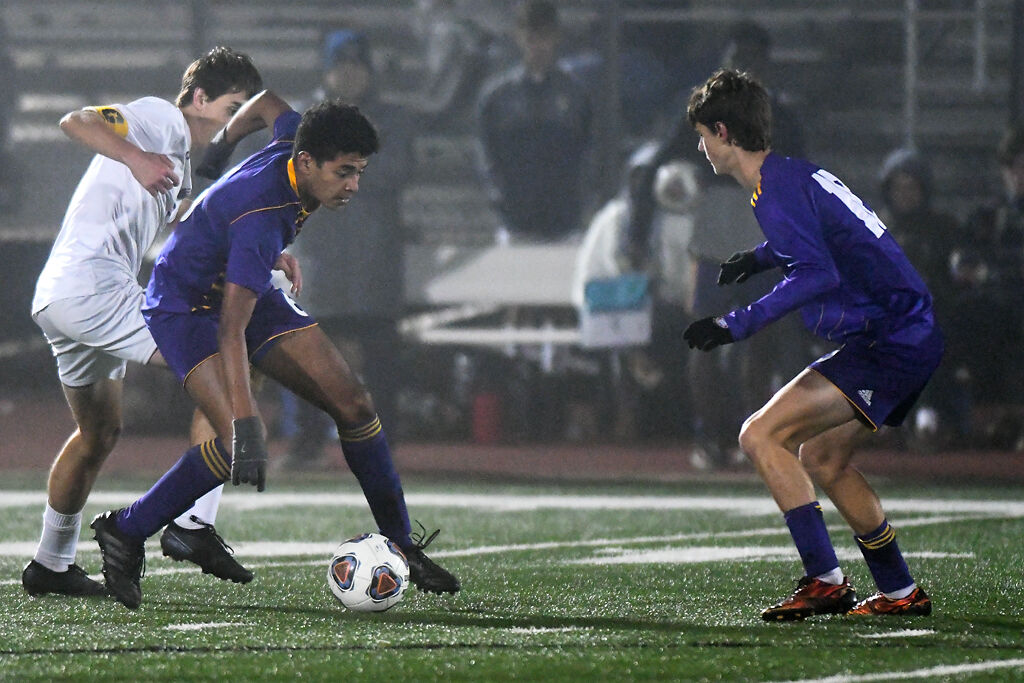 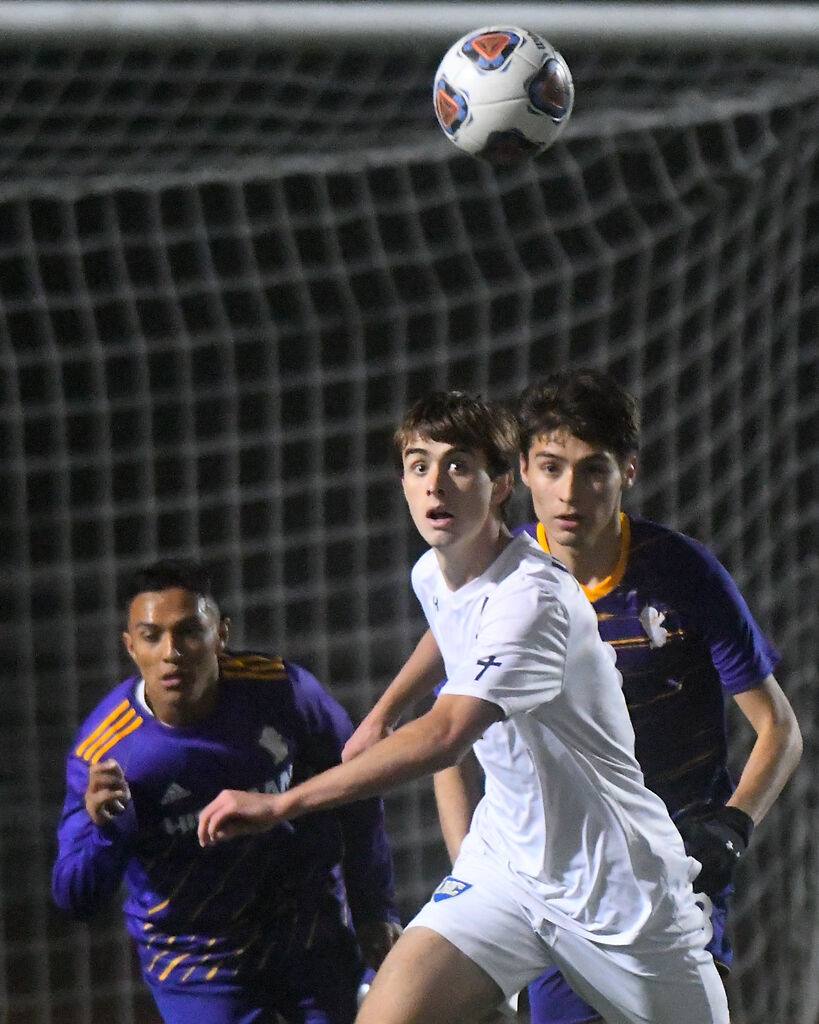 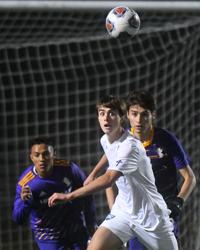 From left, Helias forward Luke Hynes and Hickman midfielder Ilhan Dervisevic scramble to get the ball on Wednesday in Columbia. Hickman beat Helias 1-0.

The Hickman Kewpies huddle before the start of their game against the Helias Crusaders on Wednesday in Columbia. The only goal of the game was by Hickman's Skip Smale-Murillo.

With the district tournament looming, Hickman is still trying to click in the biggest piece of its team puzzle: finishing.

The Kewpies have the right ideas arena making the runs, but when it comes to finding the back of the net, they’re still struggling. They only managed to score once in their 1-0 win over Helias Catholic on Wednesday night.

“It is a big final piece,” coach Wil Ross said. “the biggest part of the puzzle. But if we’re taking care of everything else and that work ethic is there, then I think we’ll get there.”

Hickman (7-4-2, 2-3 Central Missouri Activities Conference) got its second win over a conference opponent with the win over Helias. (6-6, 2-4)

“We came out playing kind of slow, but, I mean, we finished the game and we held them,” junior forward Jaiden Taing said. “That’s all we can really ask for.”

The Kewpies have made a habit of scoring early then not scoring again, something Taing said can be attributed to a lack of energy late in the game.

“I mean, normally we’ve been coming out just pumped,” he said. “We’ve been ready to go, and we just get a couple at the very beginning, and then it kind of just falls short. We run out of energy towards the end.”

Wednesday night’s game was no different. Senior defender Skip Smale-Murillo scored on a penalty kick in the 16th minute on a low shot to the right side of the net. Apart from some close calls on set plays — a handful of free kicks on Helias’ half and some corners — the Kewpies didn’t get close to the net again.

Almost all of Hickman’s free kicks went directly to Helias keeper Eli Brinegar, a problem Ross said he’s not really sure what to make of. He said the team will revisit those types of plays in practice this week, although they’ve spent a decent chunk of time running them already.

Another problem the Kewpies faced, though one that concerned Ross less, was sending balls too far downfield on offensive transitions, effectively ending potential scoring moments before they started. Ross said he’d rather have his team sending those balls too forcefully than not sending them at all.

“We can practice that all day long,” he said. “It’s a little harder to get them to make the runs or to see the ball, but if it’s just a waiting issue, we can hopefully take care of that in practice.”

While Hickman’s defense and goalie Eli Larsen managed the shutout, the Kewpies’ offensive problems affect their defensive play. Ross can regularly be heard from the sidelines shouting for his team to get back to its own half as the ball transitions down the field.

Hickman has just three more regular-season games — one against crosstown rival Battle — before the Class 4 District 9 tournament. The Kewpies’ finishing problems will be their biggest focus.

“We can’t rely on getting a PK or one goal to carry us when we get to the playoffs,” Ross said, “so it has to be better with that final piece.”