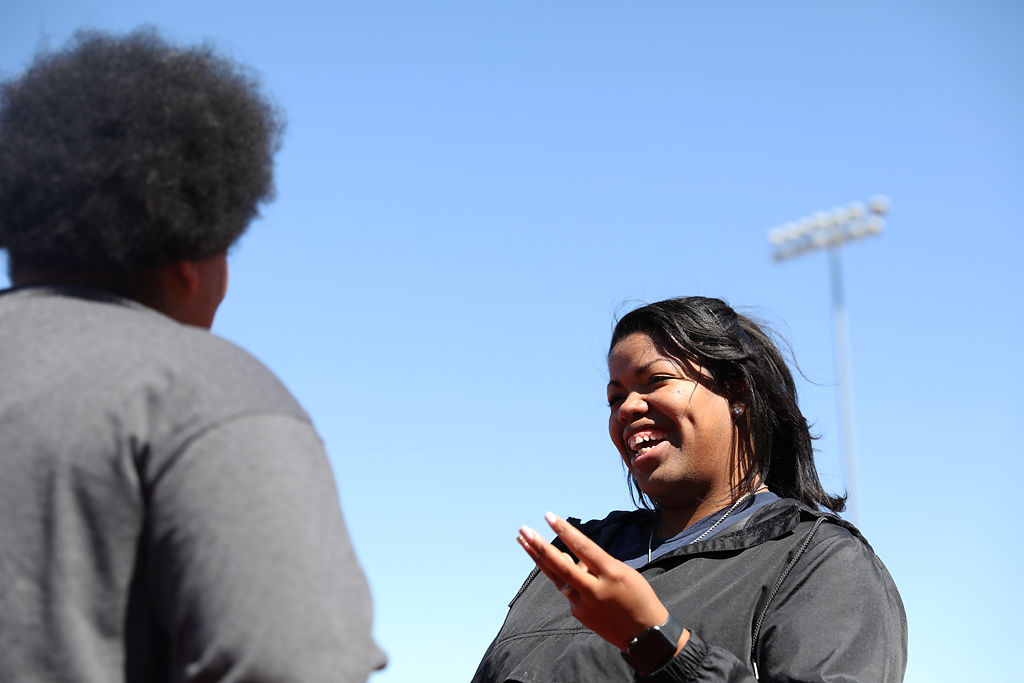 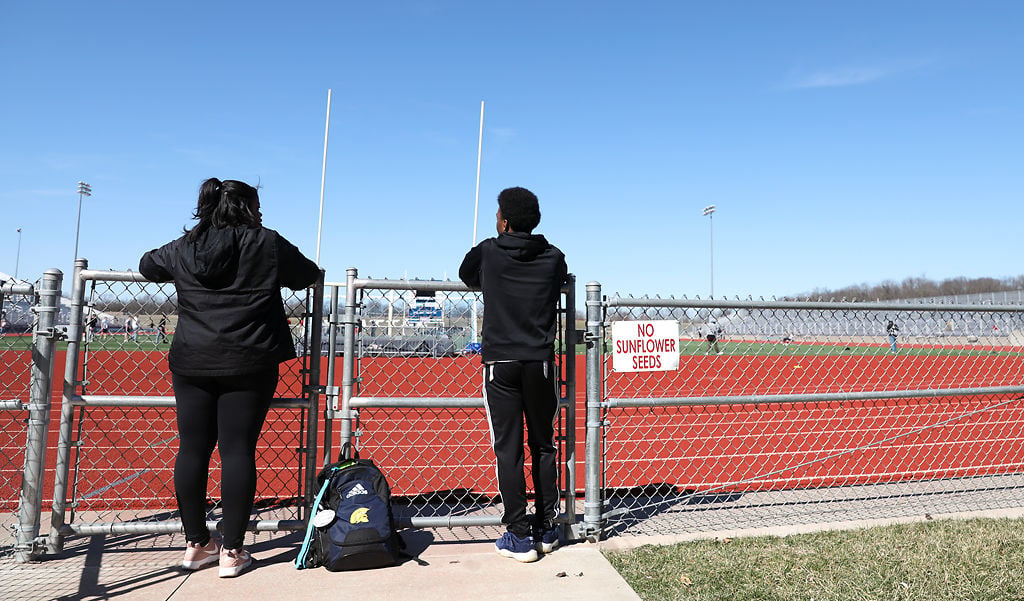 Ashanti Williams, left, has a conversation with Oshay Huston on March 22 at Battle High School. "I always wanted to be a teacher," Williams said. 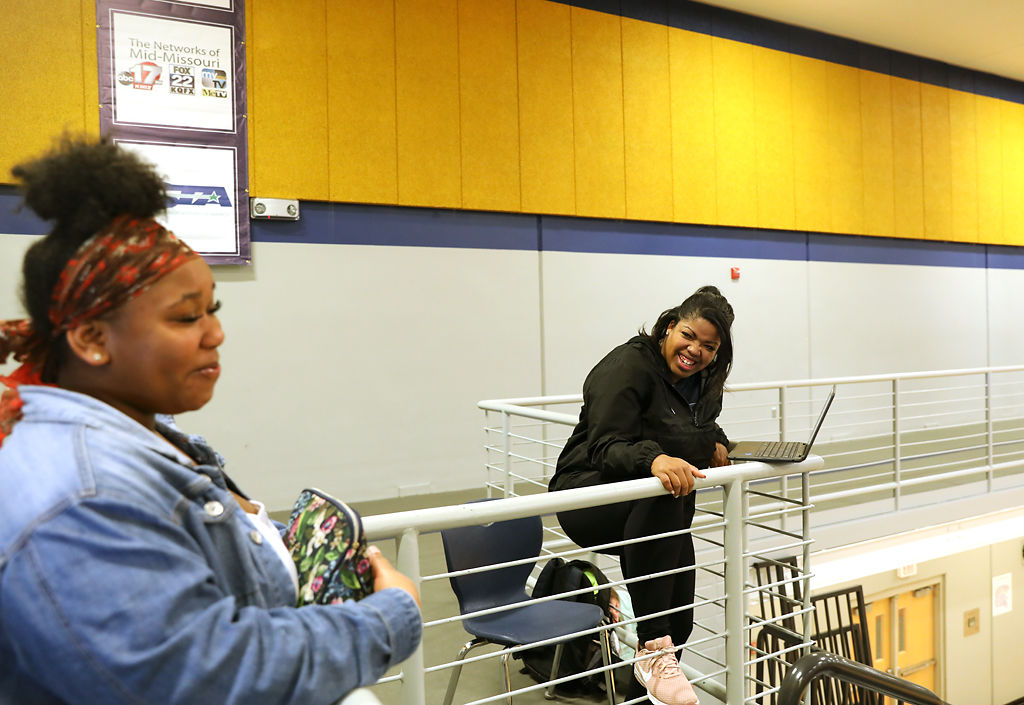 Ashanti Williams, left, has a conversation with Oshay Huston on March 22 at Battle High School. "I always wanted to be a teacher," Williams said.

When Battle High School volleyball coach and physical education teacher Ashanti Williams was student teaching at Oakland Middle School, her first “holy cow” moment as a teacher came in the form of a cupcake.

When Williams’ student teaching supervisor came to observe her in class later in the term, the dynamic had changed. The student who had once been reluctant came to school with a gift for Williams — a cupcake.

Williams is now coaching volleyball and teaching PE at Battle — two things she never thought she’d do. But she loves teaching high school kids, and she’s the first head volleyball coach at Battle to come back for a second season.

Williams initially felt she could make a bigger impact on kids at the middle-school level. When she was observing at Oakland, Williams met Jennifer Caine, who became a mentor to her. Later, when Williams was teaching in Boonville, Caine encouraged Williams to apply for the head volleyball coaching position at Battle when it came available.

Caine said she was impressed with the way Williams built relationships with students and believed she would be successful in the new position.

“Coaching is very much a man’s world,” Caine said. “It’s evolving a little bit, but when you find a female who can carry her own and come in with authority and dignity and grace and do those things, you want her to be a part of your district.”

After Williams had moved on to Battle, her mentor-mentee relationship with Caine grew to be more. The two got married in March after dating for about a year. Caine said she still sees Williams building those connections with students as both a coach and an educator.

“Being a strong, intelligent, African American female, so many of our students need that sort of role model,” Caine said. “I think she certainly gives them someone that they can look up to, and they see somebody like that be successful.”

Students are drawn to Williams now. Kids will come to her office just to shoot the breeze and raid her desk for snacks. She receives graduation announcements and invitations to graduation parties. Her favorite part of the school day, besides lunch, is greeting kids in the hallway in the morning.

Williams believes her connection with students comes from the rapport she builds with them. She said she’s always felt that if she wants to make an impact on a student, she has to get to know them.

For Williams, there isn’t much of a difference between teaching and coaching. She said she teaches her players and coaches her students. Coaching volleyball was new for Williams, as she didn’t play the sport in school. She had to learn the game on her own and step in as a volleyball coach at Boonville High School. Now, she said she can’t imagine coaching anything else.

The fast pace of volleyball makes it an even more mental game, Williams said. She has to encourage her players to move past mistakes because they can be “like poison.” There’s no time to dwell on errors.

“She’s kind of like our hype man,” sophomore middle blocker Anna Sisson said. “But also, if any of us had a problem or were struggling with something, I feel like we could always go to her.”

Sisson said she faced some mental struggles during her freshman year, and she and Williams developed a saying to help her overcome the adversity. Sisson scrawled “I’m over it” on her shoes. Whenever she made a mistake or got down during a game, she’d slap her shoes and move on.

Junior middle blocker CJ Marshall said she feels that Williams “genuinely cares” about her players. Marshall was injured and in a boot last season and said Williams was always making sure Marshall was on track to recover. At practice, the two would talk on the bench about pretty much everything.

Williams said she tries to be the teacher and coach that she always wished she’d had while growing up in Fayette. In her hometown, Williams developed a “happy-go-lucky” attitude and love for sports. She said she had “the best childhood ever” growing up with two older brothers, running relays and playing kickball in their neighborhood.

“Anything with a ball and a bat, we were playing it,” she said. “The summers were amazing. My mom would cook for us, she’d cook beans and weenies. And we would have a neighborhood full of kids all the time.”

Williams and her brothers all grew up to be athletes. She said they were always competitive with each other, something that was formative in her own life as an athlete. She went on to play basketball and softball at Central Methodist University while initially studying to be an athletic trainer. But as soon as she saw her first semester schedule, she decided to switch to teaching.

Williams struggled in some of her college courses. She ended up having to retake some classes and stay in school a fifth year.

“It didn’t become reality until someone was like: ‘Look, you can’t become a teacher,’” she said. “It took someone to tell me that I couldn’t for me to be like, ‘I can do it.’ I’ve had to work really hard to get to where I’m at. It’s been rewarding.”

Williams’ mom, who still lives in Fayette, was a role model for her. They’re still close, and Williams said that as she’s gotten older, they’ve become more like best friends. They talk at least five times a day, each asking the other for advice. Williams loves working in Columbia, in part because it’s so close to home.

She said that for her, “family is everything.” Williams’ uncle imparted some wisdom on her that she’s kept in mind.

“‘When you leave this place, make sure you leave your name behind and your legacy with it.’ He’s like, ‘Your story’s not going to be read until you’re gone, so keep making your story.’”

Columbia College interim athletic director Cindy Potter has worked her way up at the school over the last 17 years.

Woods in a better place heading into this PGA Championship