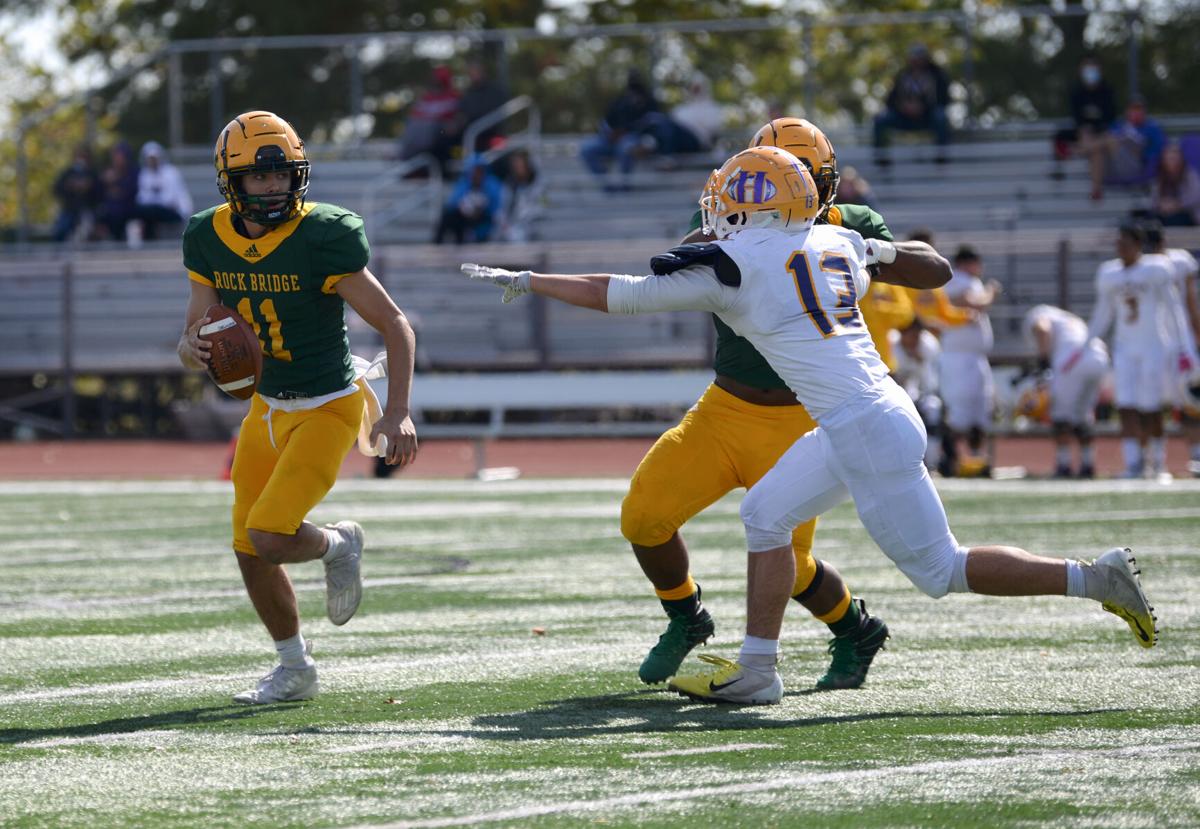 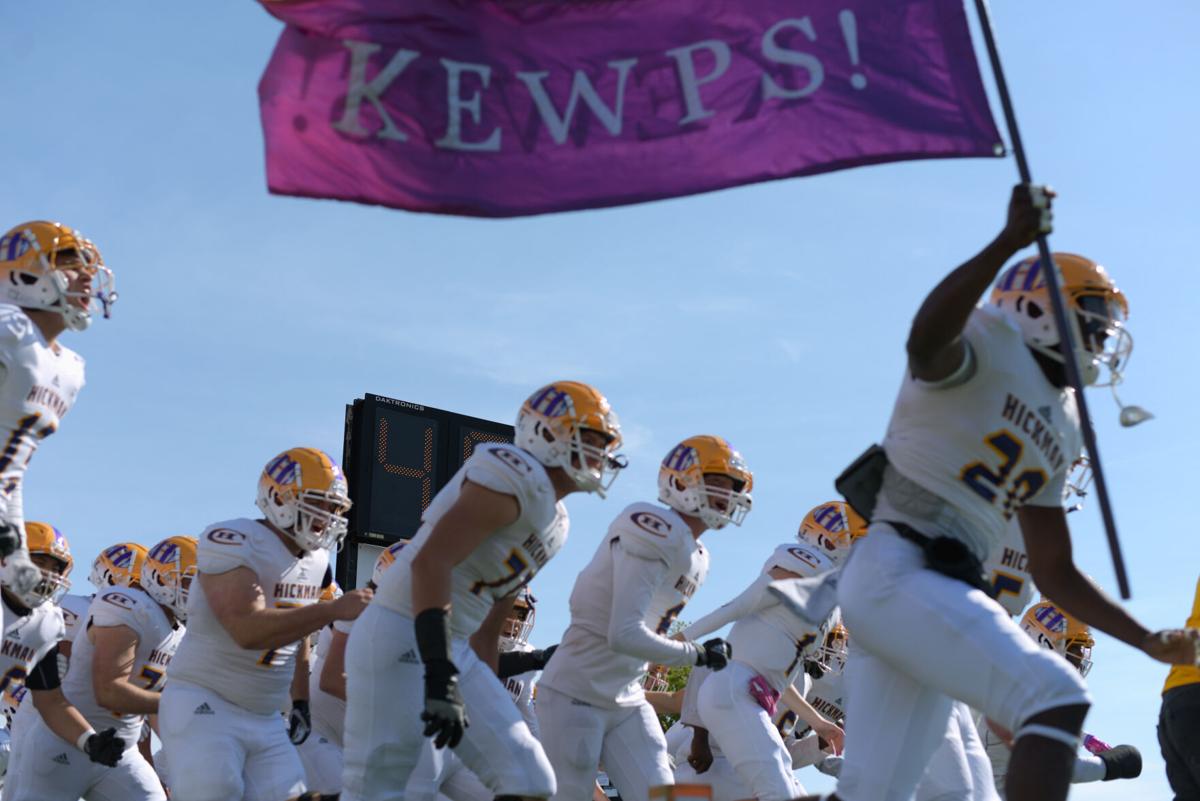 The Hickman Kewpies take to the field against the Rock Bridge Bruins for the Providence Bowl on Saturday at Rock Bridge. After their 41-32 loss to the Bruins, the Kewpies' record this season is 2-5. 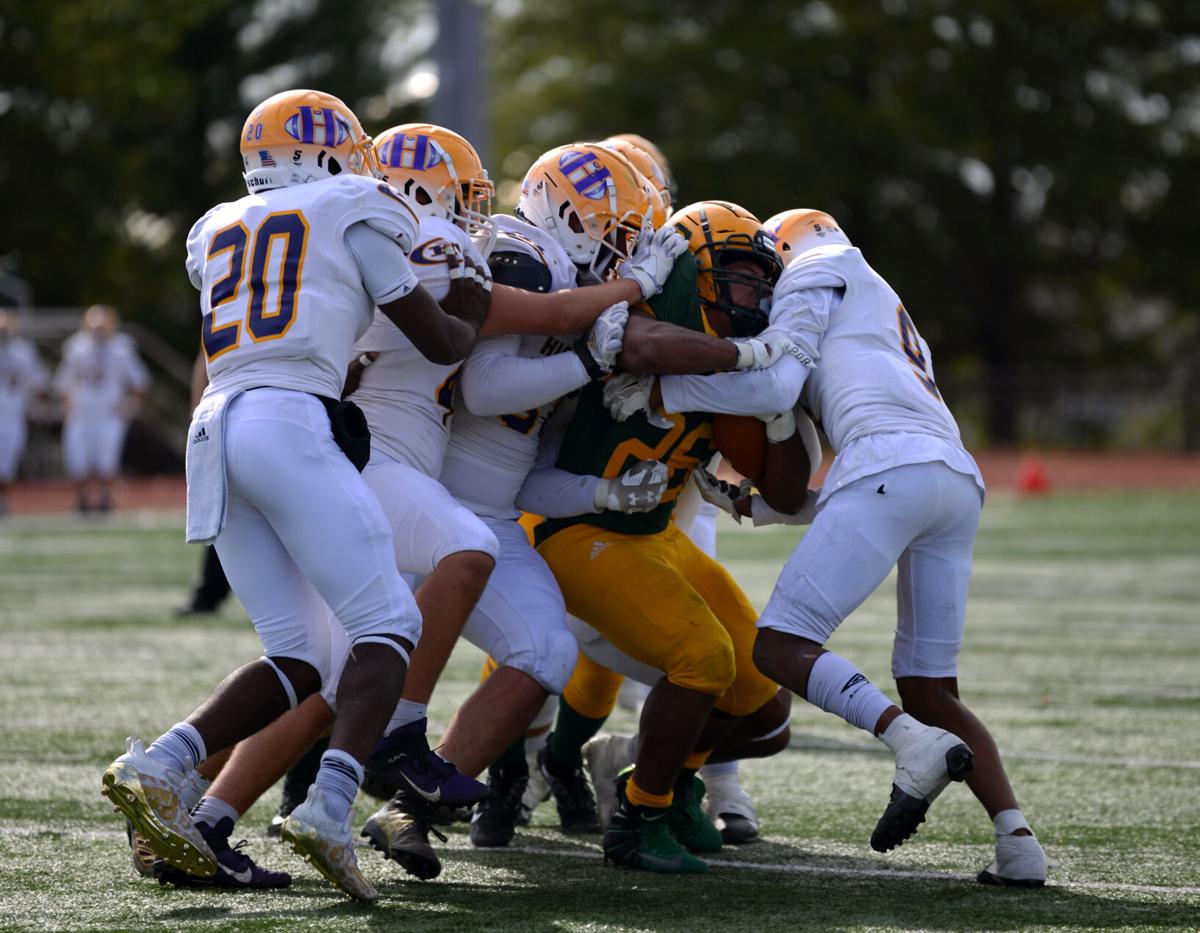 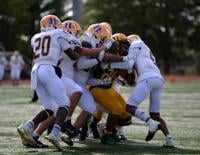 The Hickman Kewpies take to the field against the Rock Bridge Bruins for the Providence Bowl on Saturday at Rock Bridge. After their 41-32 loss to the Bruins, the Kewpies' record this season is 2-5.

Instead of being surrounded by the usual Friday night lights and a packed crowd, this year’s Providence Bowl took place on a cold and windy Saturday morning with limited attendance.

Regardless of the circumstances, one thing stayed consistent: a Rock Bridge win in the Providence Bowl.

The Bruins continued their dominance over Hickman with their eighth straight win over the Kewpies, a 41-32 victory, on Saturday.

After not practicing or playing for nearly two weeks because of a positive COVID-19 case in the program, head coach Van Vanatta was worried that the team might come out flat to start.

“We were sluggish,” Vanatta said. “You could tell we were getting tired.”

It didn’t help that Hickman played its best offensive game of the season.

Coming into Saturday’s matchup, the Kewpies only averaged 21.8 points per game. A common theme for them this year has been their lack of points, but against the Bruins (5-2, 4-2 Central Missouri Activities Conference) they had their best offensive showing yet, putting up a season-high 32 points.

“We were physical,” Hickman coach Cedric Alvis said. “We had a great first half, but we let the physicality get the best of us in the second half.”

Quarterback TJ Turner had a big day for Hickman (2-5, 2-3). Entering Saturday’s matchup, Turner had thrown for only 551 yards and eight touchdowns on the season. However, Turner was able to take advantage of the Bruins’ smaller secondary, drawing multiple defensive pass interference calls on Rock Bridge.

Turner’s biggest play came on a 69-yard passing touchdown to LJ Williams, which left them down by two in the second quarter.

However, this would be the closest the Kewpies would get to victory. Similar to most of its season, Hickman struggled to hold on to the ball, turning it over three times.

“It’s the same thing as Week 1, we got to hold on to the football,” Alvis said. “We were able to move the ball when we held on to it and didn’t turn the ball over.”

Quarterback Nathan Dent had one of his most efficient games of the season. Dent looked sharp and accurate, something he struggled with earlier this season. A dual threat athlete, he rushed for two touchdowns. However, Dent took a nasty hit in the third quarter causing him to come out of the game for a series.

With his quarterback out and the Bruins still in a one-possession game, running back Bryce Jackson took matters into his own hands. As backup quarterback Gavin Samuel was in the game, Jackson took a heavy workload and dished punishment on the Kewpies’ defense.

“You always take it personally when your quarterback gets hit,” Jackson said. “I knew we had to pick it. Someone had to step up and I decided that it was it going to be me.”

Jackson’s most consistent drive finished with an 8-yard touchdown run and a 2-point conversion. Jackson would add another touchdown late in the third quarter.

“I’ve got to give credit to the O-line,” Jackson said. “We only had two days of practice, and through those two days they were really focused. All of my success came from them. They created some holes, and I just ran through them.”

Eventually, Dent made his return, sealing the win for the Bruins. For Dent, there was never any doubt whether or not he would come back into the game. He was focused on getting a win and sending the seniors out with a win in their final home game.

“I wanted to finish this game,” Dent said, “finish this one out for the seniors, especially.”

Dent wasn’t the only Bruin to get roughed up Saturday. Linebacker Nate Norris and cornerback/running back Daleshaun Coleman were a couple of the notable players who left the game briefly with injuries.

“We had some bumps and bruises,” Vanatta said. “We literally had to replace four guys on kickoff throughout the game.”

“We were banged up earlier, so we got a little healthier, but we came out and got banged up today,” Dent said.

Interestingly enough, Coleman’s injury was sustained on offense, rather than defense. Coleman has primarily been used as the starting corner for the Bruins, but he got an ample amount of playing time at running back Saturday, even scoring a 24-yard rushing touchdown.

This was all according to plan for Vanatta.

“We’re trying to keep Bryce healthy, too” Vanatta said. “With everything going on, we worried about conditioning, but we know Daleshaun can run the football.”

After struggling in their last game against Liberty, the Bruins’ special teams looked much better against Hickman.

On a windy and difficult day for kickers, Jack Bower started and ended the scoring for Rock Bridge with his only two field goals of the day. The bigger of the two came in the fourth quarter, when he knocked in a 41-yard field goal to put the Bruins up by three possessions.

“He’s a clutch, confident kid.” Vanatta said. “He believes in himself. We knew when we were huddled up in the end and we said, ‘We believe in you, No. 16,’ and he put it through.”

For Alvis, his biggest takeaway from the loss was ball security.

“We had three turnovers, and one of those killed us,” Alvis said. “If we were able to hold on to it and finish the drive, it’s a different ballgame.”

For Rock Bridge, the win over its crosstown rival means much more than just a W in the win column.

“It means everything for all the alumni and past players,” Dent said. “It’s a big game, probably Columbia’s biggest, I’d say.”

“It’s huge for the program,” Vanatta said. “I’ve only been here four years, so I wasn’t a part of those first four years, but it’s huge. They’re doing a good job over there. They’re going to turn some things around, and I can see that coming.”

With the Bruins getting their first win in nearly a month, Jackson believes they are taking the necessary steps heading into the playoffs.

“I think we’re going in the right direction,” Jackson said. “I’m excited to come back next week and get back to work.”

The Hickman Kewpies football team fell to the Rock Bridge Bruins for the eighth consecutive year in Saturday's Providence Bowl.