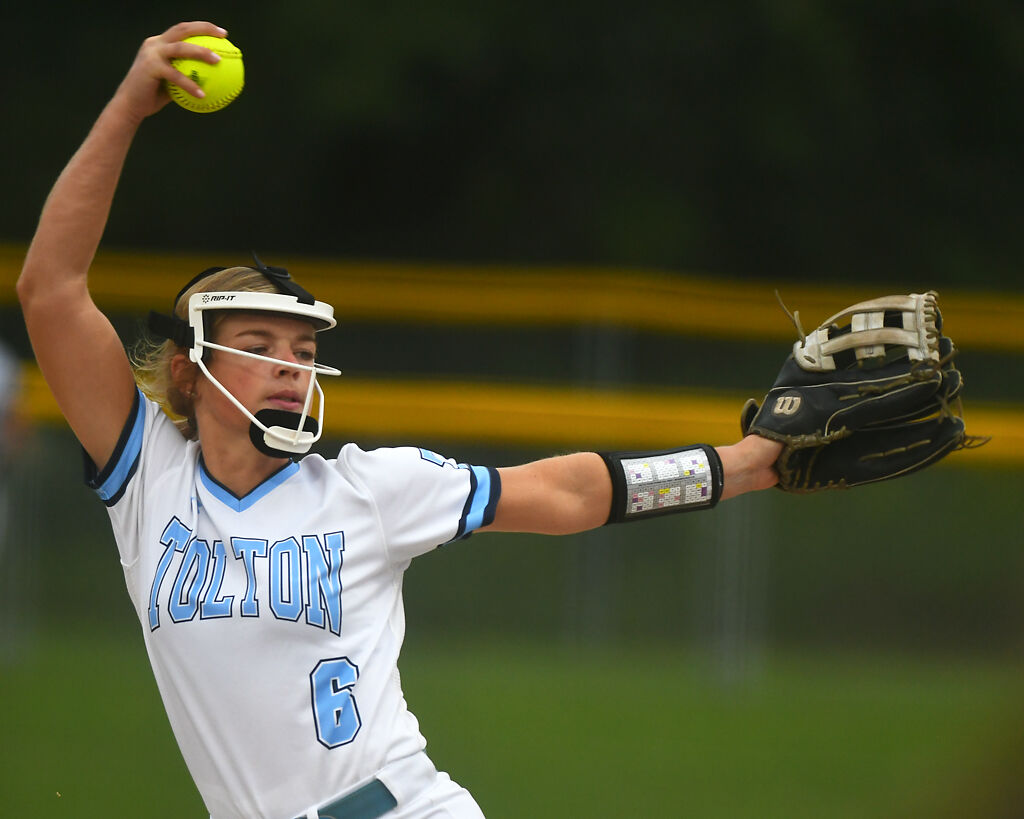 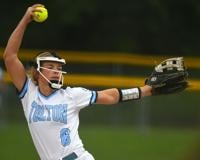 Tolton senior pitcher Paige Bedsworth will leave behind a legacy of success after earning her place among Missouri’s 1,000-strikeout club in September. Bedsworth, along with catcher Ali Widmer, led a formidable 2020 regular season for Tolton, which is one of the favorites in the postseason. 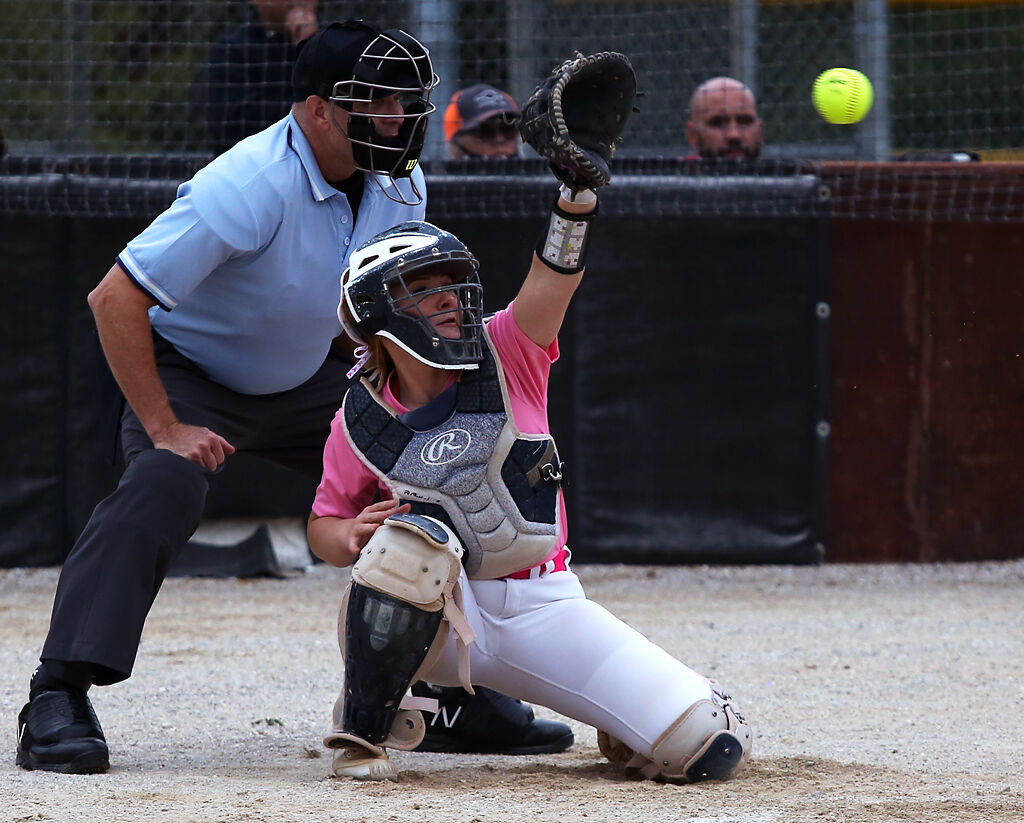 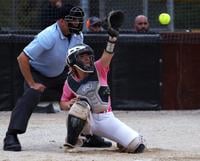 Tolton senior catcher Ali Widmer was regarded as the team's vocal leader during her last high school season. After graduation, Widmer plans to study business at the University of Missouri.

Tolton senior pitcher Paige Bedsworth will leave behind a legacy of success after earning her place among Missouri’s 1,000-strikeout club in September. Bedsworth, along with catcher Ali Widmer, led a formidable 2020 regular season for Tolton, which is one of the favorites in the postseason.

Tolton senior catcher Ali Widmer was regarded as the team's vocal leader during her last high school season. After graduation, Widmer plans to study business at the University of Missouri.

In sports, you want the best players to have the ball. And in softball, only two players get the ball every play: the pitcher and the catcher.

Thankfully for Tolton Catholic, the team’s only two seniors happen to play those positions.

The Trailblazers are currently in the middle of a historic season, enjoying an 18-3 record entering the state playoffs. Tolton is also the No. 1 team in Class 2 for the first time in school history, according to the Missouri High School Fastpitch Coaches Association’s rankings last week.

In his second season as head coach for Tolton, Taylor Bartlett can thank his pair of seniors for the success.

Pitcher Paige Bedsworth has been breaking records all season long. Bedworth was able to join the 1,000-strikeout club in late September, a feat that only 10 other players in Missouri history have achieved . The future Drake Bulldog has also thrown five no-hitters this season alone.

“Paige is a once-in-a-generation kind of player,” Bartlett said.

Throughout Bedsworth’s historic career at Tolton, catcher Ali Widmer has been there. Known as the team’s vocal leader, Widmer has become the engine that not only keeps the team going, but also keeps Bedsworth focused.

“Ali is the team leader; she has good relationships with everybody on the team,” Bedsworth said. “If anybody needs to laugh, they go to her.”

Even though the chemistry is clearly evident between the two during a game, it is their relationship off the field that keeps them successful.

Despite always being opponents in travel softball growing up, the pair became inseparable once they got to Tolton as freshmen.

In addition to being with each other throughout the school day, mainly due to their similar class schedules, they also work together at Beet Box, a Columbia restaurant.

“There always seems to be this chemistry between each of them,” Ali’s father, Chris Widmer, said.

That chemistry off the field powers their chemistry and trust on the field. In the rare occasion that Bedsworth makes a mistake during a game, it is always Widmer who isn’t afraid to let her know.

However, this season brought the duo an extra responsibility that they never had in their first three seasons — being the senior leaders.

“It can be very challenging at times,” Widmer said.

The duo has learned to take different approaches to its style of leadership. Bedsworth leads by example, either at practice or in the classroom, while Widmer is the vocal leader who makes sure the team’s mindset is always where it needs to be.

“We feel like the girls look up to us,” Bedsworth said. “It’s fun to know you give off that positive energy to them.”

The Trailblazers couldn’t ask for a better start, as they were undefeated in the first 13 games of the season. However, adversity hit quickly during a September stretch when they lost three out of four games.

After taking Class 5’s top-ranked team, Rock Bridge, to 11 innings before losing by one run, the Trailblazers dropped games to Mexico and St. Dominic on either side of a win over New Bloomfield. The string of losses allowed doubt to creep into the young Tolton dugout.

When the duo was needed most, both showcased their leadership skills by talking with the team and reminding them of the talent they have.

“We played our best ball all year against Troy-Buchanan because Ali and Paige took the bigger role with the girls,” Bartlett said.

The Trailblazers finished the regular season by winning their last four games by a combined 20 runs.

“Sometimes you learn more about life with adversity more than anything else,” Chris Widmer said.

After losing in the Class 2 quarterfinals last season to Palmyra, the Trailblazers are looking to get further into the tournament and win the state championship this year. That goal looks achievable for the Trailblazers given their No. 1 ranking from the Coaches Association.

“We have the potential to win a state championship, but we can’t get too ahead of ourselves. We have to take it game by game,” Bartlett said.

No matter what happens, this season will be bittersweet for the Widmer family.

After spending eight consecutive seasons in the stands for Tolton softball, Chris and Julie (Ali’s mother) Widmer will finally see their time as team parents come to a close. Ali’s two older sisters, both played softball for Tolton, including her oldest sister, who was on the first softball team in school history.

After graduation, Bedsworth will head to Drake to play under coach Rich Calvert, the Bulldogs’ all-time wins leader. Widmer plans to study business at MU next fall.

As the duo nears the end of its four years at Tolton, it will leave a legacy of excellence, victory and great character.

“It’s been a fun four years; it’s been the best memories with these girls,” Bedsworth said.

After glancing at her longtime partner, Widmer said, “I wouldn’t want to go through this with anybody else.”

After defeating Linn by forfeit in the first round, Tolton will continue its Class 2 District 3 Tournament run in the semifinals against Eugene or Fayette. The semifinal is set for 4 p.m. Thursday at South Callaway High School in Mokane.