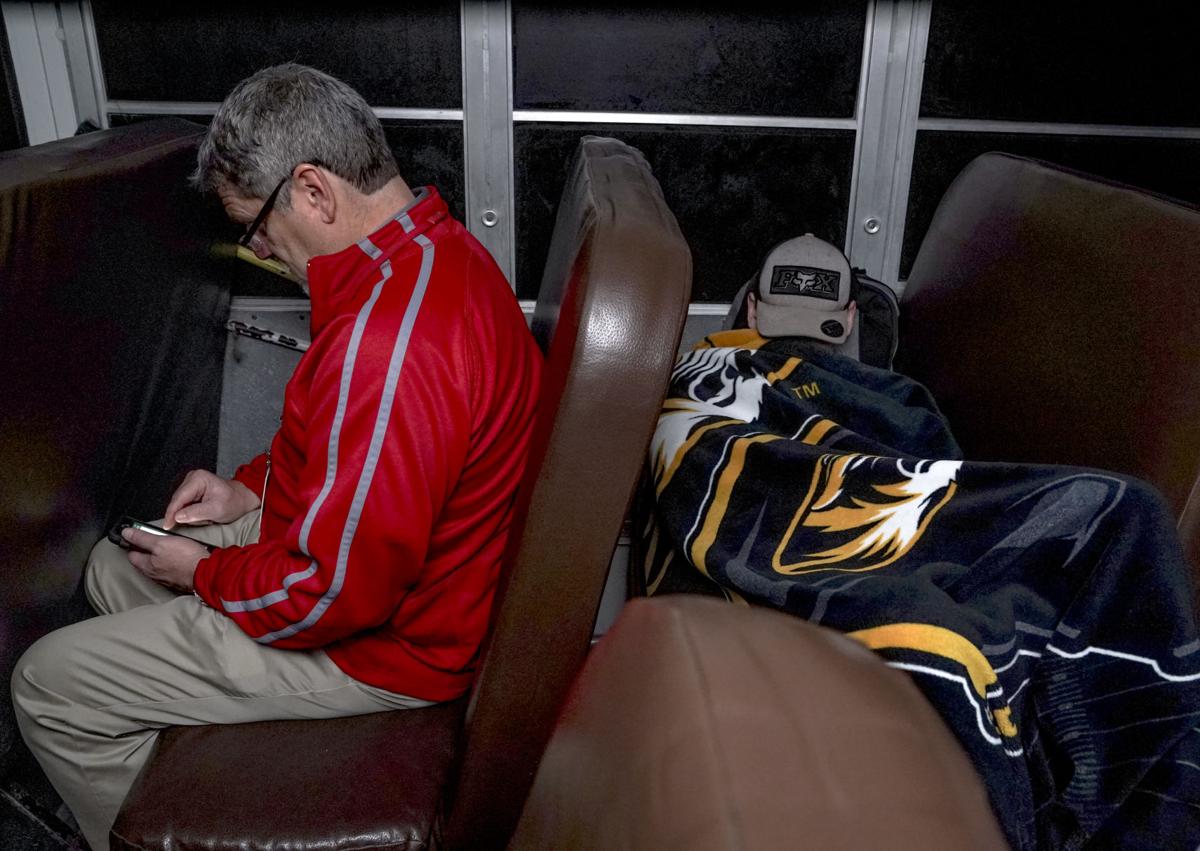 Dan Bachmeier, left, plays Garden Scape on his phone while Kevin Raines sleeps on the bus as the Harrisburg Bulldogs make their way to Mizzou Arena on Saturday at 1:11 a.m. Bachmeier is the assistant coach for the basketball team and he said Garden Scape helps him to relax before a game. 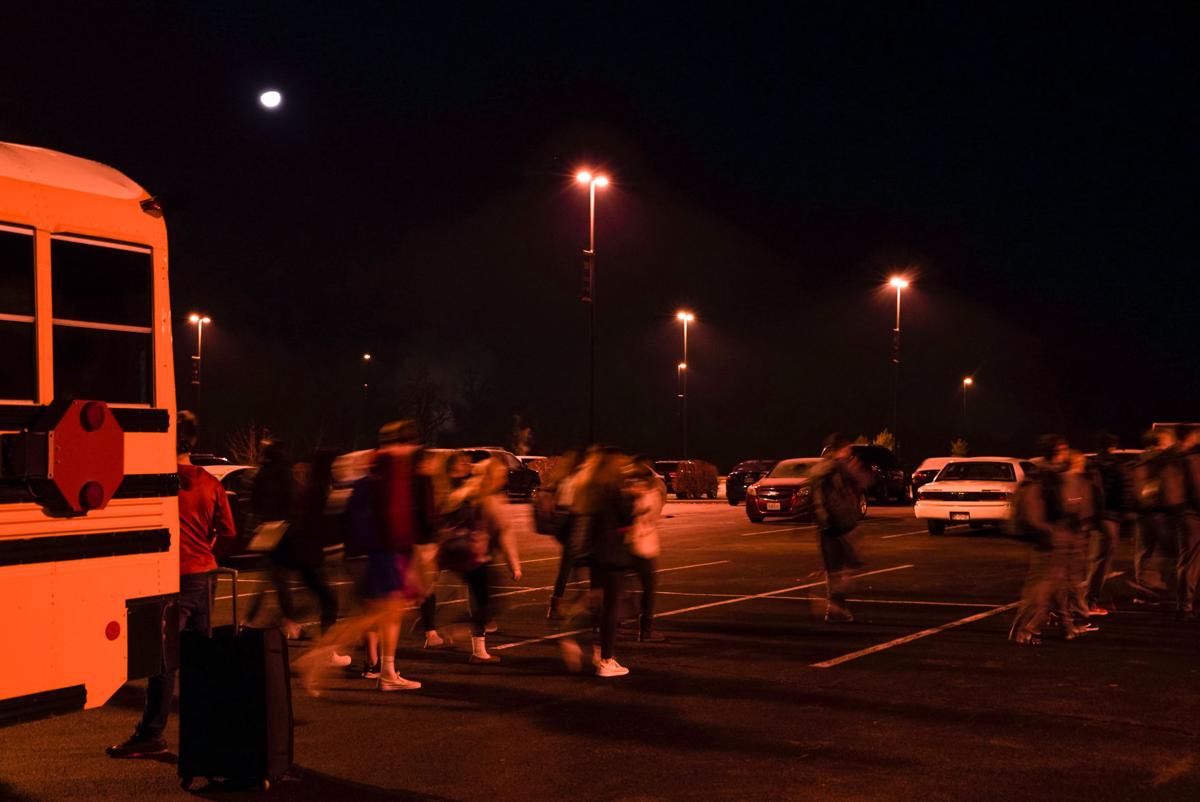 The Harrisburg basketball team, along with student fans and cheerleaders, make their way inside Mizzou Arena at 1:23 a.m. on Saturday for the Norm Stewart Classic. According to the National Weather Service, the recorded low for this time was 26 degrees. 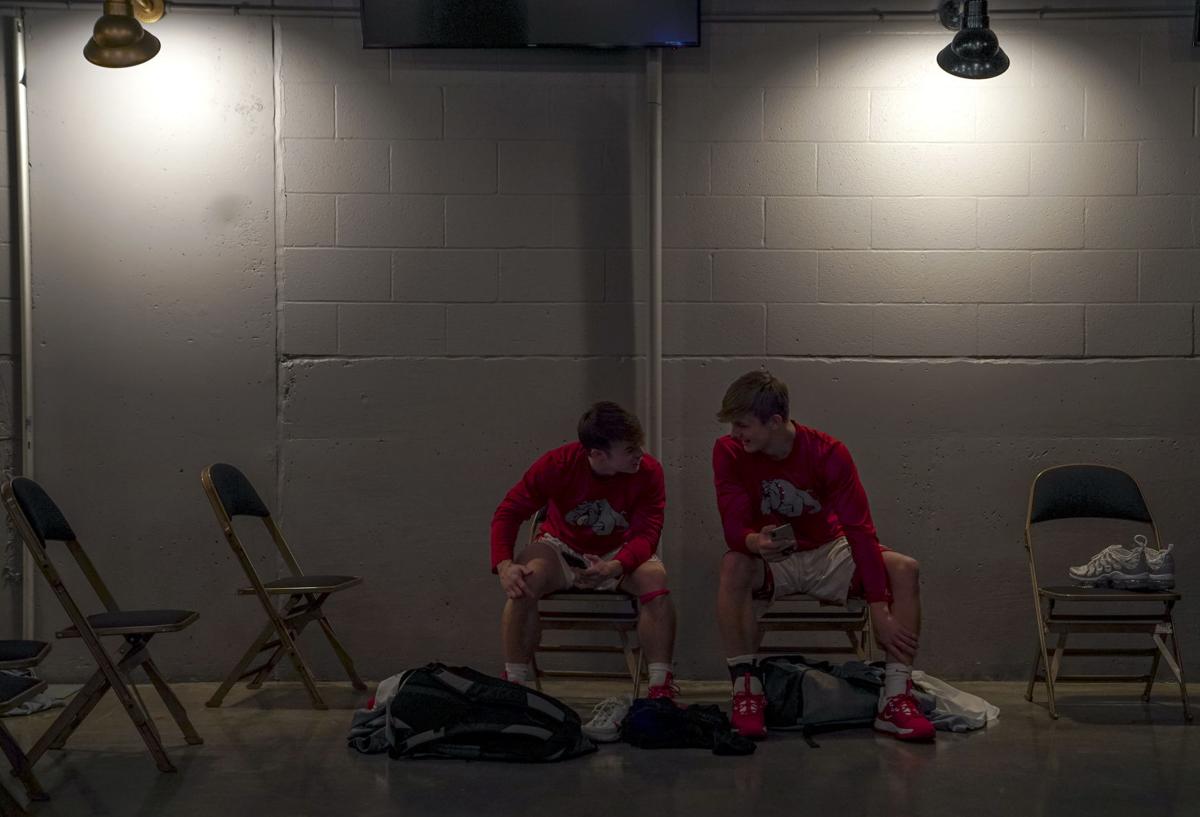 Brayden Hudson and Wyatt Robinson prepare for their match against Calvary Lutheran on their phones on Saturday for the Norm Stewart Classic at 2:12 a.m. Robinson said they are best friends. 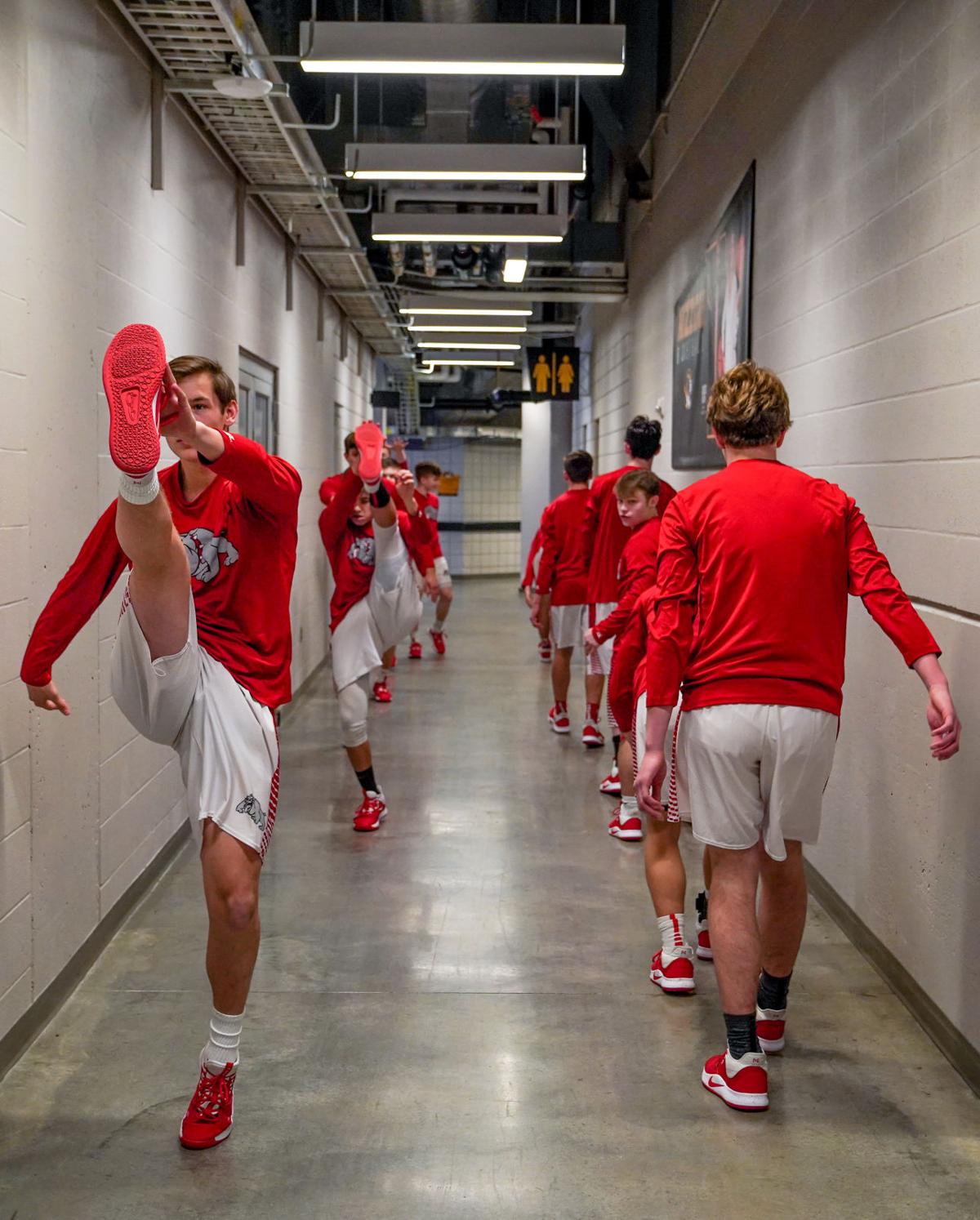 Players from Harrisburg Bulldogs stretch their legs with a high kick warm up along a corridor within Mizzou Arena on Saturday at 2:16 a.m. Coach Kyle Fisher later spoke to the players and reviewed the game plays with them. 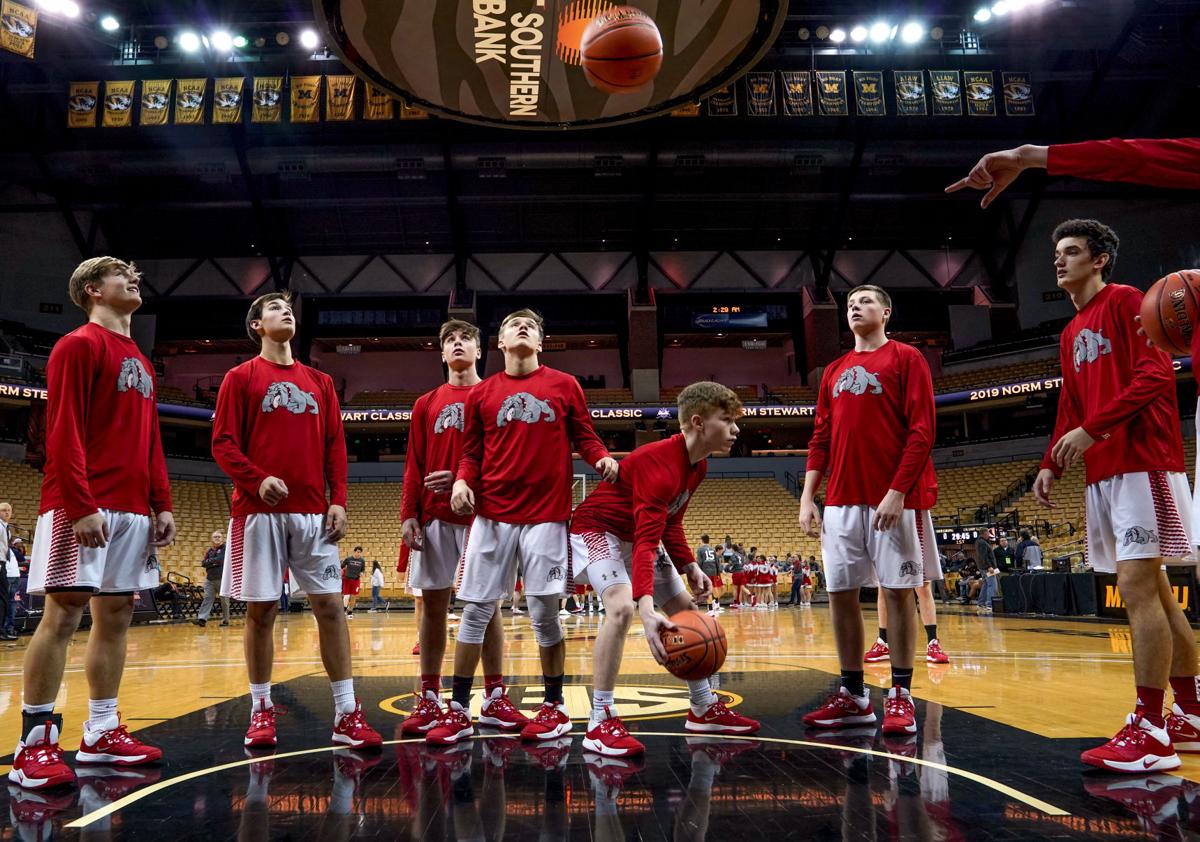 Harrisburg Bulldog players warm up on Saturday for the Norm Stewart Classic at Mizzou Arena while the clock reads 2:30 a.m. Coach Kyle Fisher said the Mizzou Arena would be one of the largest gyms many of his players had played in. They warmed up for more than half an hour for the 3 a.m. start time. 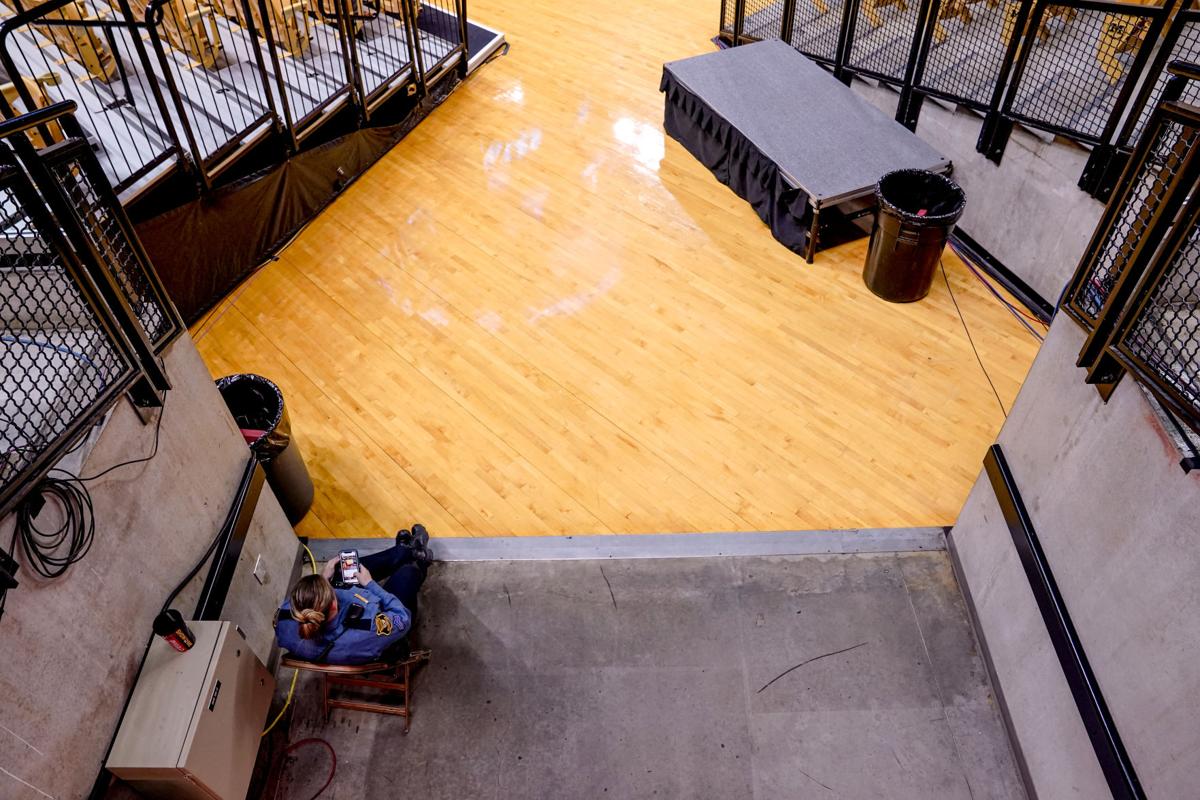 A police officer uses her phone to view her Instagram feed as the Norm Steward Classic takes place on Saturday at the Mizzou Arena. The officer was there during the entire event. 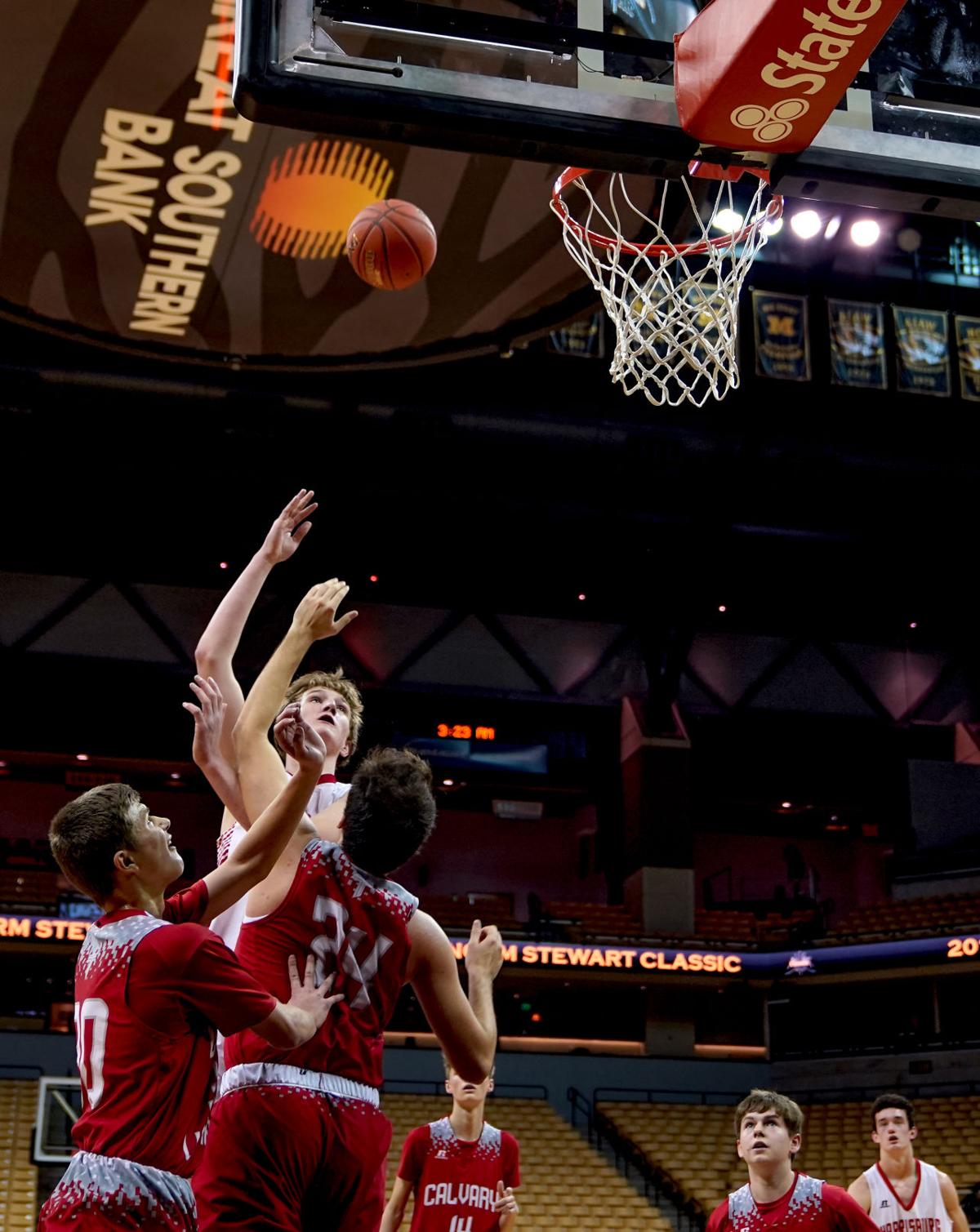 Harrisburg's Trevor Wheeler does a layup in the first quarter of the game against Calvary Lutheran High School on Saturday for the Norm Stewart Classic at 3:23 a.m. Wheeler plays the position of center for the Bulldogs. 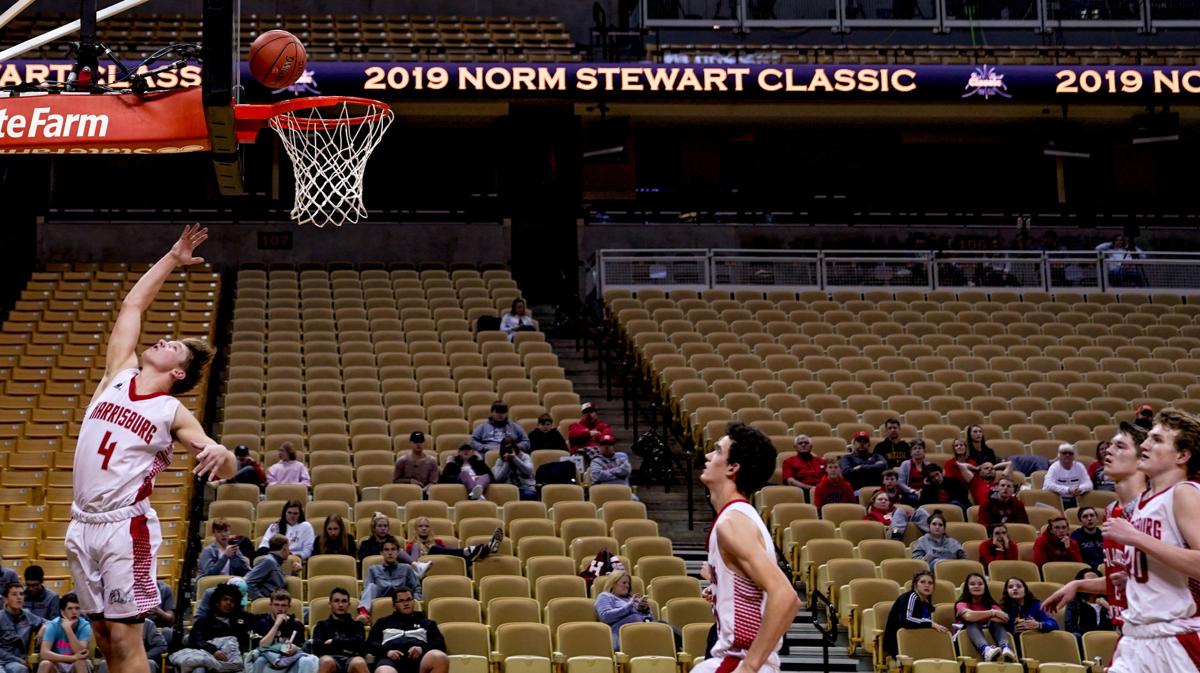 Wyatt Robinson scores a point after completing a high-speed layup on Saturday for the Norm Stewart Classic. Other than his offensive contributions, Robinson's strong defensive play was key in leading Harrisburg to their 62-58 victory. 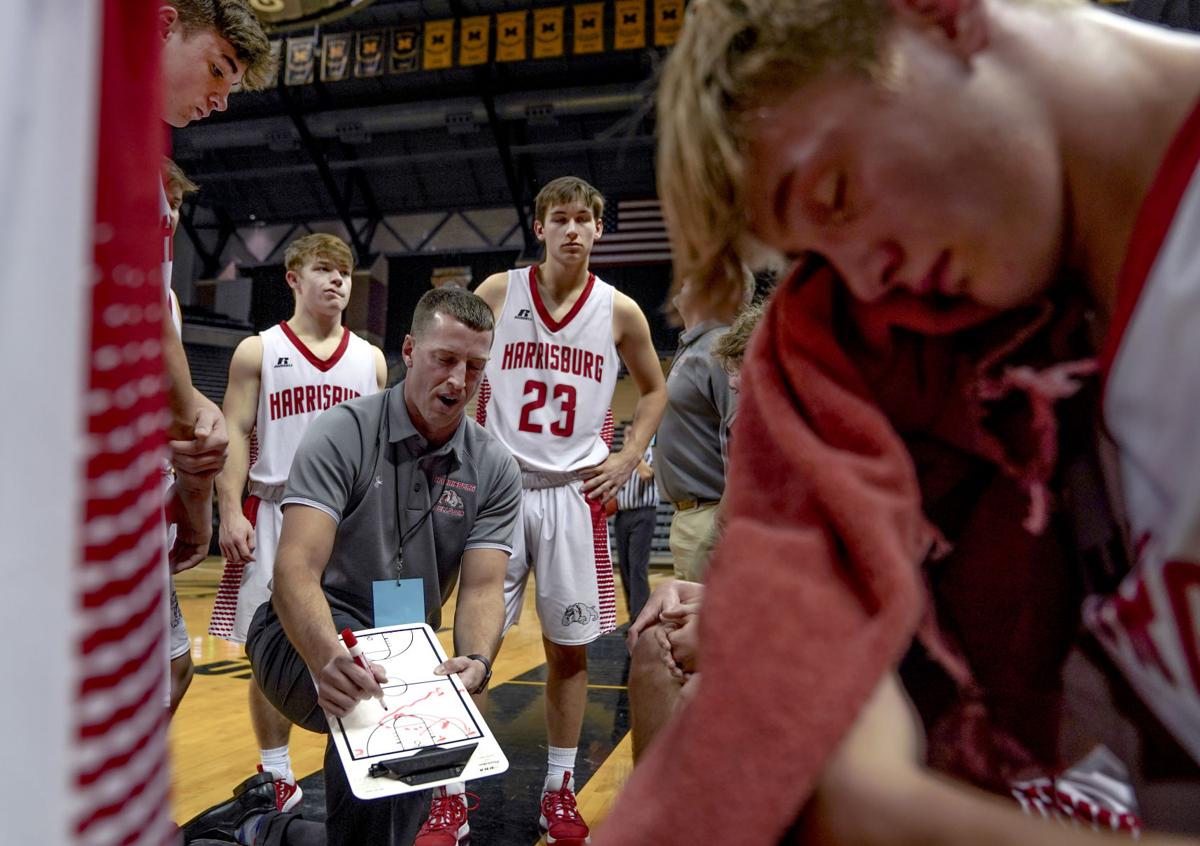 For 10 a.m. Saturday, Head Coach Kyle Fisher draws out a play at the Norm Stewart Classic. After scoring the first basket, Harrisburg lagged, giving up an 11-0 Lions run. 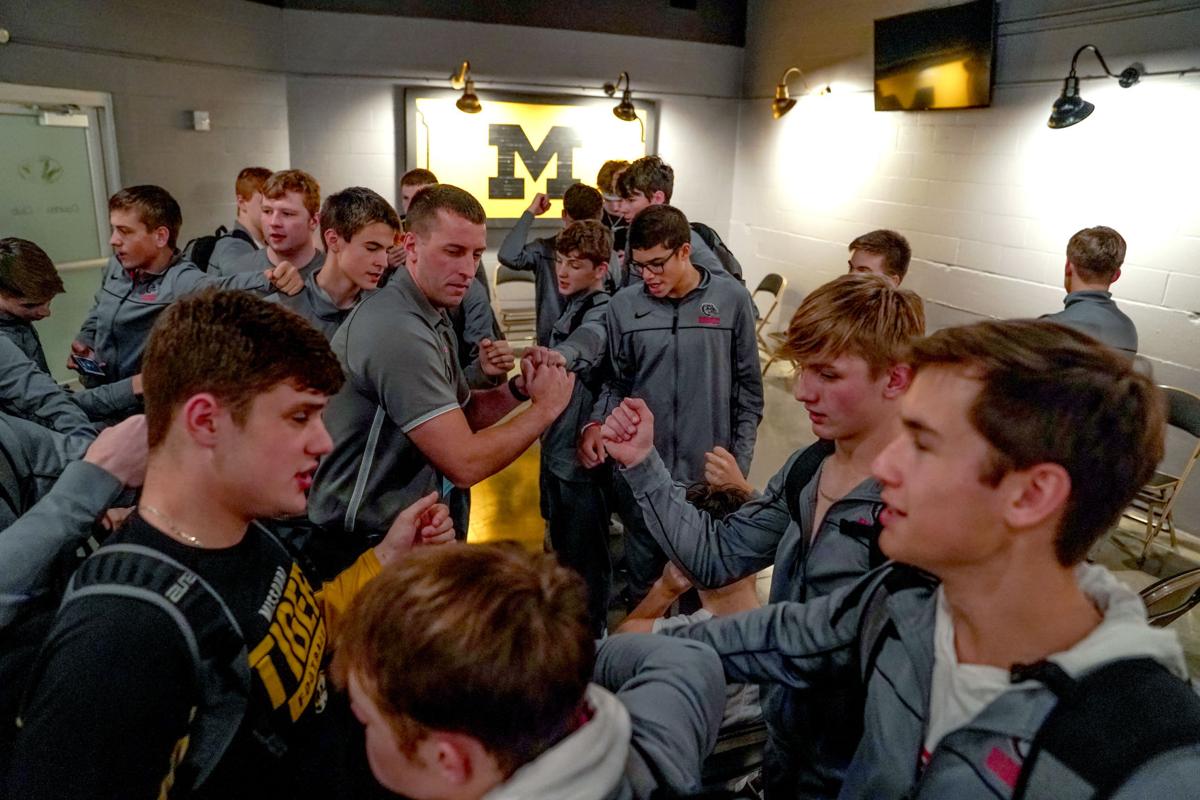 Coach Kyle Fisher congratulates his team after its narrow win over Calvary Lutheran on Saturday at 4:42 a.m. Fisher said the Harrisburg Bulldogs will appear in the Classics next year as long as they are invited back. The final score was 62-58 and the team traveled back to the Harrisburg High School. 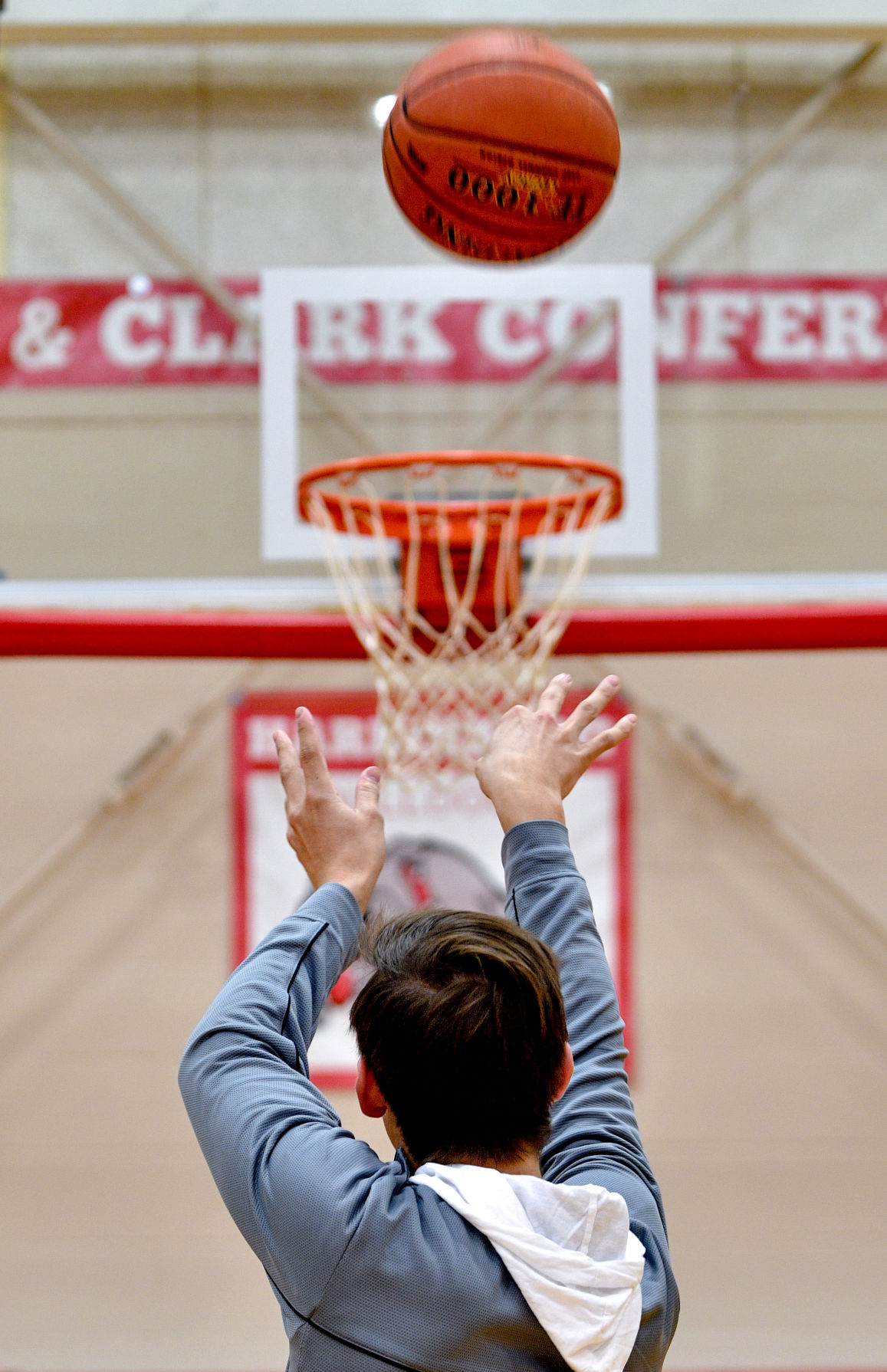 A Harrisburg Bulldog player practices free throws at Harrisburg High School on Saturday at 12.34 a.m. before traveling to Mizzou Arena. The Bulldog players were preparing for the game against Calvary Lutheran at 3am for the Norm Stewart Classic. 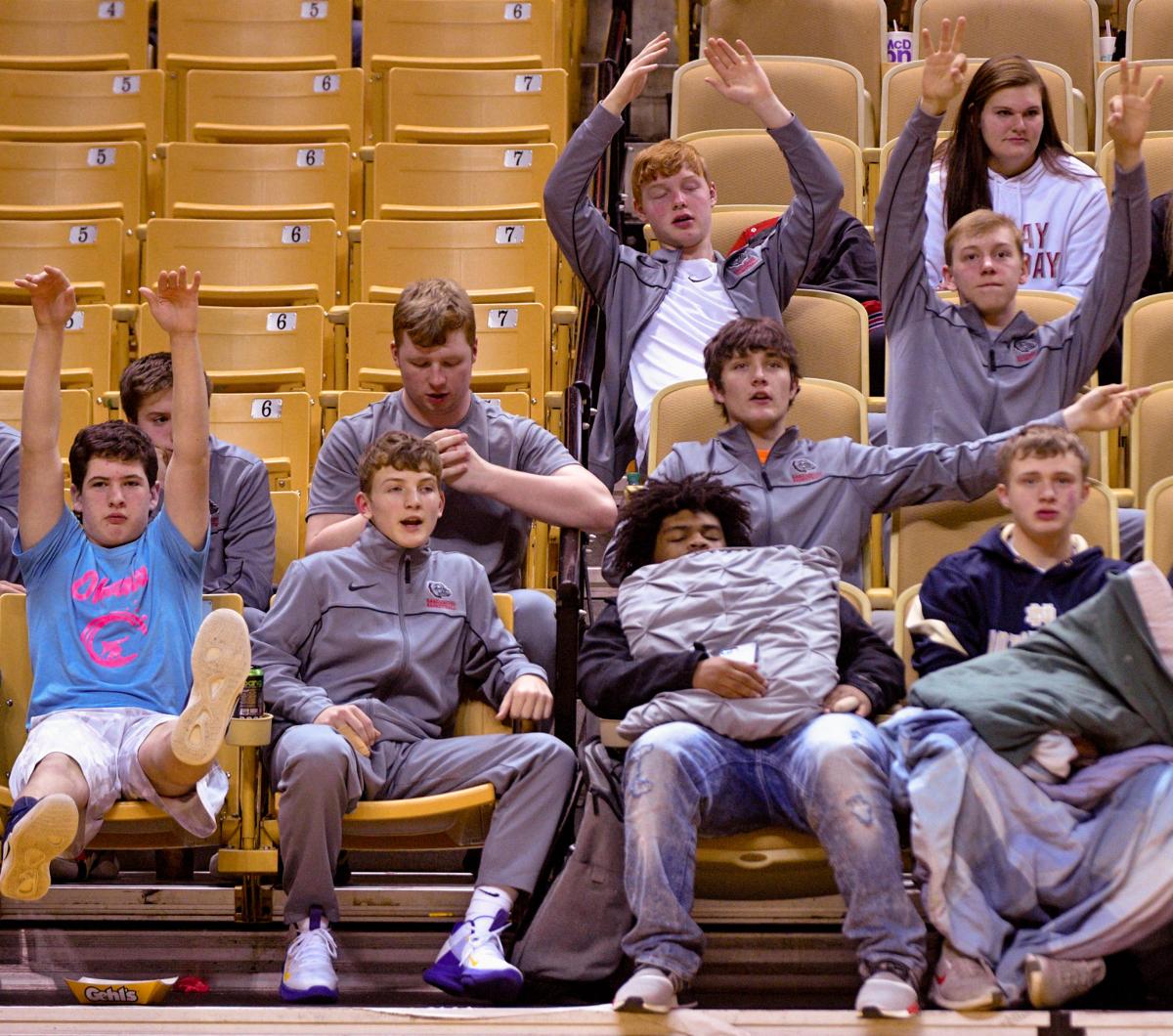 Delbert Harris, center, sleeps while students from Harrisburg High School cheer on the Bulldogs on Saturday for the Norm Stewart Classic at 4:18 a.m. The students traveled nearly half an hour via bus or personal car to support the team. 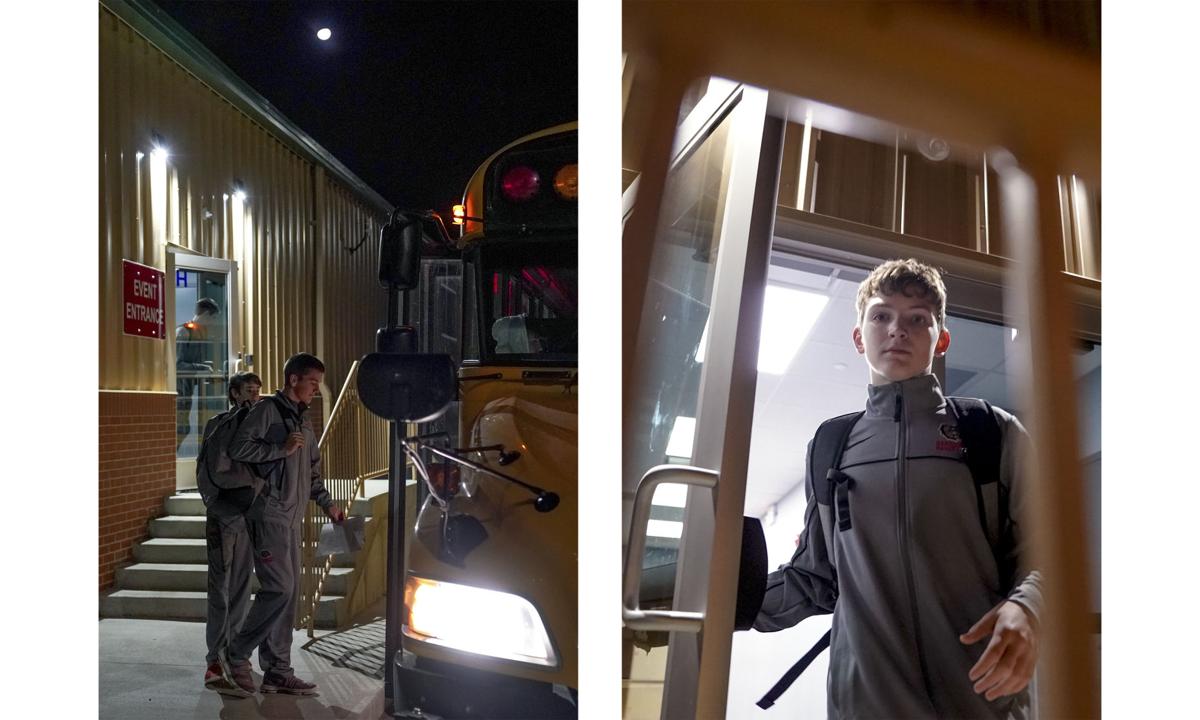 Harrisburg Bulldogs leave Harrisburg High School's gym and enter a school bus on Saturday for the Norm Stewart Class at Mizzou Arena. They entered the bus at 12:46 a.m.

When is the absolute worst time of day to play a basketball game? This question is posed every December at the Norm Stewart Classic. This year, the Harrisburg boys team learned the correct answer is 3 a.m.

Starting at 5 p.m. Friday and ending at 6 p.m. Sunday, the 2019 Classic pit 47 high school hoops teams against each other in one marathon of a weekend: 48 hours, 24 games, back-to-back-to-back. Consequently, some teams play at more desirable times than others; this year Harrisburg pulled the shortest straw and played Calvary Lutheran at 3 a.m. Saturday morning.

Most of the Bulldogs’ regular-season games are scheduled to tip at 7:30 p.m. How does the team prepare to start a seven and a half hours later?

Preparation starts far in advance of the ungodly tip-off time. Harrisburg coach Kyle Fisher says that being well-rested is essential for any game, but this one especially.

“We actually talked about two nights in advance is the biggest night (to get rested),” Fisher said. “Anytime we play at 3 a.m., it’s even more important (than the night preceding).”

Before every game, Fisher gathers as much scouting information as he can and the one at Mizzou Arena is no different. The coach talks to other coaches who have played his opposition for any helpful intel and does his best to watch a game himself. Sometimes he’ll gather film, but for Calvary Lutheran, Fisher typed up a two-page stapled packet for every member of his team.

The Bulldogs played at a similar time in last year’s classic, so Fisher says the team has developed a bit of a strategy for the day of the game, starting with a low-intensity workout the night of the contest.

At Friday’s midnight walk-through his squad lined up along the baseline while Fisher talked through the information in his scouting packet.

“It tells us a lot about the other team and gets us ready for the game later,” sophomore Jace Carr said.

Fisher says the team uses the walk-though to get focused on basketball and the game ahead. Harrisburg practices a run-through before every game, but more importance is placed on the shootaround on the night of the Classic.

The team goes over its own offensive plays and defensive sets, using the scout squad to mimic opposing teams’ movements. This way the varsity players have an idea of how to guard the other team at full speed.

The half-hour bus ride to Columbia rang with chatter from the athletes. The players had slept all they could before the walkthrough, and instead of resting, the athletes discussed playing at Mizzou Arena, one of the largest gyms where any of them had played. The upcoming matchup was also a topic of discussion.

When it arrived in Columbia the squad lounged in the near-empty seats of Mizzou Arena, watching the Tolton girls team finish its own awfully-scheduled game, losing handly to St. Joseph’s Academy.

The warmups were the same as any game. Layup lines led to a pregame talk where Fisher spoke again about the game plan.

After scoring the first basket, Harrisburg looked lethargic, giving up an 11-0 Lions run. The players were noticeably sluggish, but energy came from some key substitutions and the Bulldogs closed the first quarter trailing only by three. Harrisburg took the lead before halftime and held it for the rest of the game. Calvary Lutheran kept the game close, but Harrisburg’s preparation showed and the Bulldogs eventually won 62-58.

“We were ready to play but they were just more ready to start,” said the Gary Filbert player of the game Tanner Lanes. “The bench came up clutch.”

Lanes credits lockdown defenders Wyatt Robinson and Trevor Wheeler with the success as well as sharpshooting from the Brayden Ott.

Fisher says the team will “absolutely” appear in the Classic next year.

“As long as they invite us back, we’ll be here,” he said.

As for the time of day?

“We’ve gone 2 a.m. last year, 3 a.m. this year, but I don’t want to get used to this time slot,” Fisher said. “I like a noontime slot or something where we can get a little sleep. But we’ll play wherever they put us.”