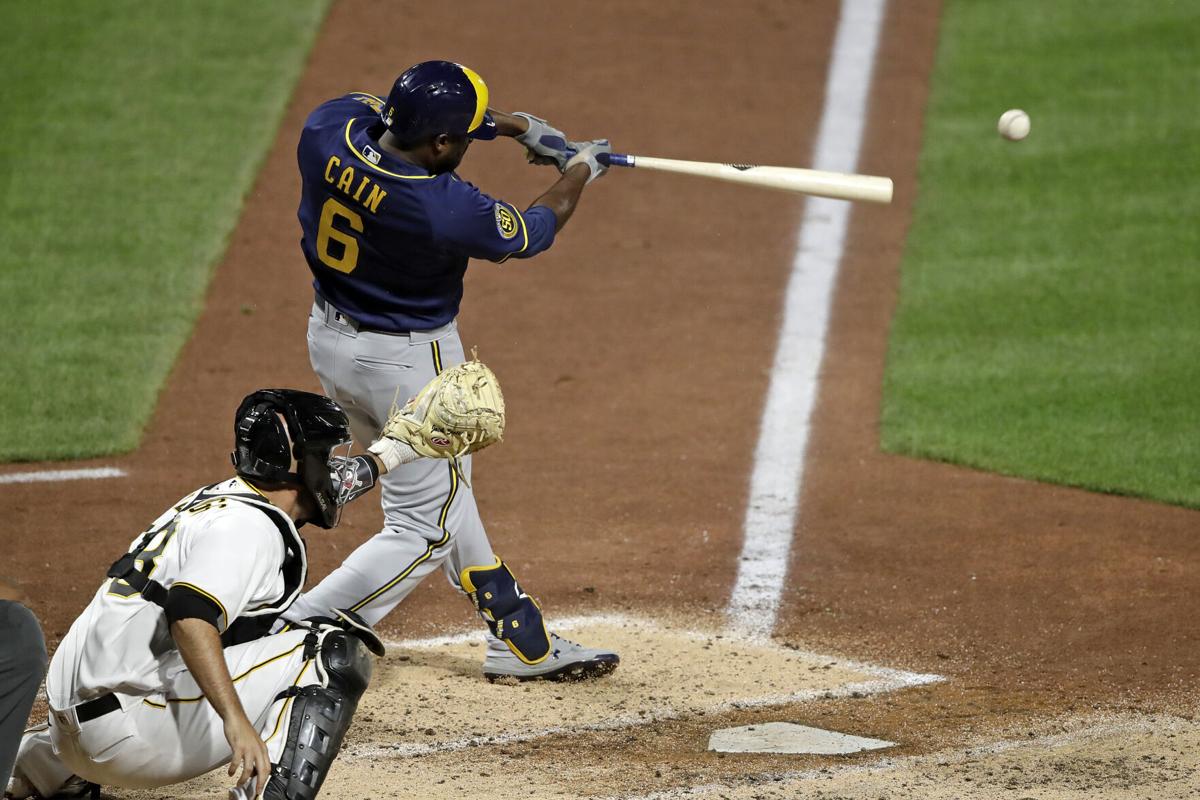 Lorenzo Cain drives in a run with a single during the seventh inning of a game Monday in Pittsburgh. The Milwaukee Brewers outfielder opted out of the remainder of the league’s season Saturday. 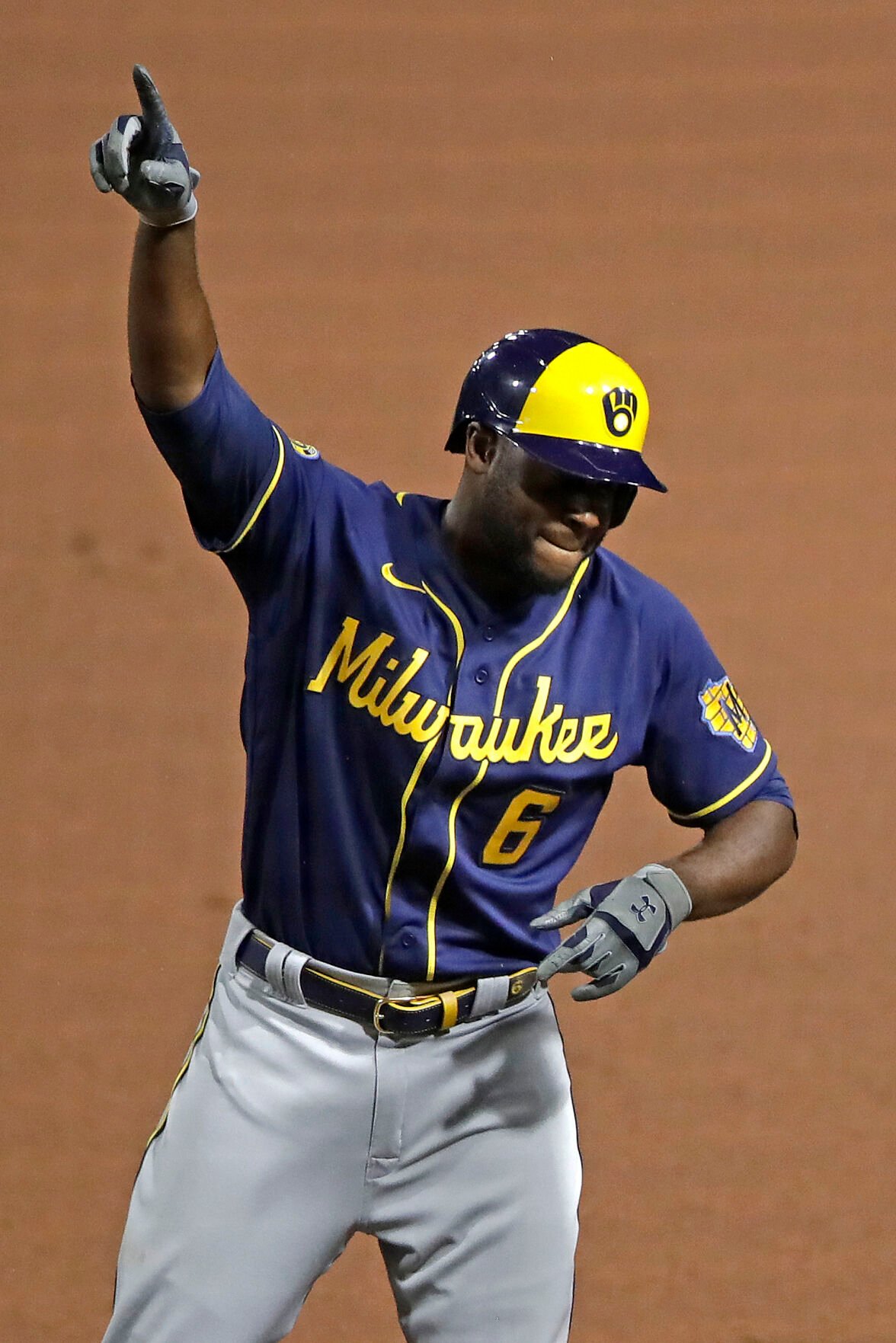 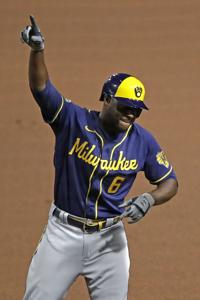 Milwaukee Brewers center fielder Lorenzo Cain celebrates at first base after driving in a run with a single off Pittsburgh Pirates relief pitcher Nik Turley during the seventh inning of a game Monday in Pittsburgh.

Lorenzo Cain drives in a run with a single during the seventh inning of a game Monday in Pittsburgh. The Milwaukee Brewers outfielder opted out of the remainder of the league’s season Saturday.

Milwaukee Brewers center fielder Lorenzo Cain celebrates at first base after driving in a run with a single off Pittsburgh Pirates relief pitcher Nik Turley during the seventh inning of a game Monday in Pittsburgh.

Milwaukee Brewers outfielder Lorenzo Cain has decided not to play the remainder of the 2020 season.

Cain, a married father of three young sons, said he made the decision “after careful consideration and discussion with my family.”

“With all of the uncertainty and unknowns surrounding our game at this time, I feel that this is the best decision for me, my wife, and our three kids,” Cain said Saturday in a statement released by the Brewers.

“The Brewers organization was very understanding and supportive of my decision, and I thank them for that. I wish all of my great teammates the best of luck this season and look forward to getting back on the field in 2021. Please stay safe,” he said.

The two-time All-Star’s decision was announced as the Brewers’ scheduled home opener against St. Louis was postponed for a second straight day because multiple members of the Cardinals tested positive for the novel coronavirus.

Cain announced his decision on the same day Miami Marlins second baseman Isan Díaz said he had opted out. At least 21 members of the Marlins’ traveling party have tested positive for COVID-19.

“I think it’s fair that the events of the past week I’m sure played a part (in Cain’s decision),” Stearns said. “He did not specifically mention the Cardinals or the Marlins, for that matter. I think this was just something that he had been considering, thinking about, discussing with his family and ultimately it just got to the point yesterday where he was ready to make his decision.”

The exit of the 34-year-old Cain leaves the Brewers without one of their biggest leaders as they attempt to make a third straight playoff appearance, something they’ve never accomplished in franchise history.

Cain finished seventh in the NL MVP balloting in 2018 when teammate Christian Yelich won the award and the Brewers ended up one win away from the World Series, losing to the Los Angeles Dodgers in a seven-game NL Championship Series. Cain ranked fourth in the NL in on-base percentage (.395) and steals (30) and fifth in batting average (.308) that season.

“It’s going to hurt,” Stearns said. “Lo is a big part of this team. He, from a physical standpoint, was in a great spot this year. His body felt really good. I think we saw that through summer camp and the first week of the season. He’s in great shape and playing at a really high level right now, and we were going to get a really good season out of him, and so we will miss that and the energy he provides.”

This may result in more opportunities for Ben Gamel, a versatile outfielder who made 36 starts in left field, 15 in right and 14 in center last season. Gamel was one of Milwaukee’s hottest hitters throughout its summer camp and has followed that up by going 3 of 12 with a homer and a triple in four regular-season games.

“Obviously Lorenzo Cain is a big part of of the MLB fraternity,” Chicago Cubs pitcher Jon Lester said. “A great player, you know, a face for a franchise,” Chicago Cubs pitcher Jon Lester said. “So, you know, him opting out is a huge blow for not only the Milwaukee Brewers but, you know, fans of Lorenzo Cain. But we all have to sit back and allow guys to make decisions that best suit them and best suit their families.”“And I will never question a guy, you know, like Lorenzo, I’ll never question his thought process to that. And that’s a decision that him and his family probably sat down and thought long and hard about, and I’m sure he talked to his teammates about it.

“And, you know, I support anything that any of these guys do, whether they show up and play or they opt to be at home. It’s a crazy time that we’re in. And, you know, you can’t second-guess anybody that wants to make a decision like that,” he said.

With 'no idea' what the future holds, Drinkwitz excited for 2020 season

College football in the spring: When? How much? Who plays?