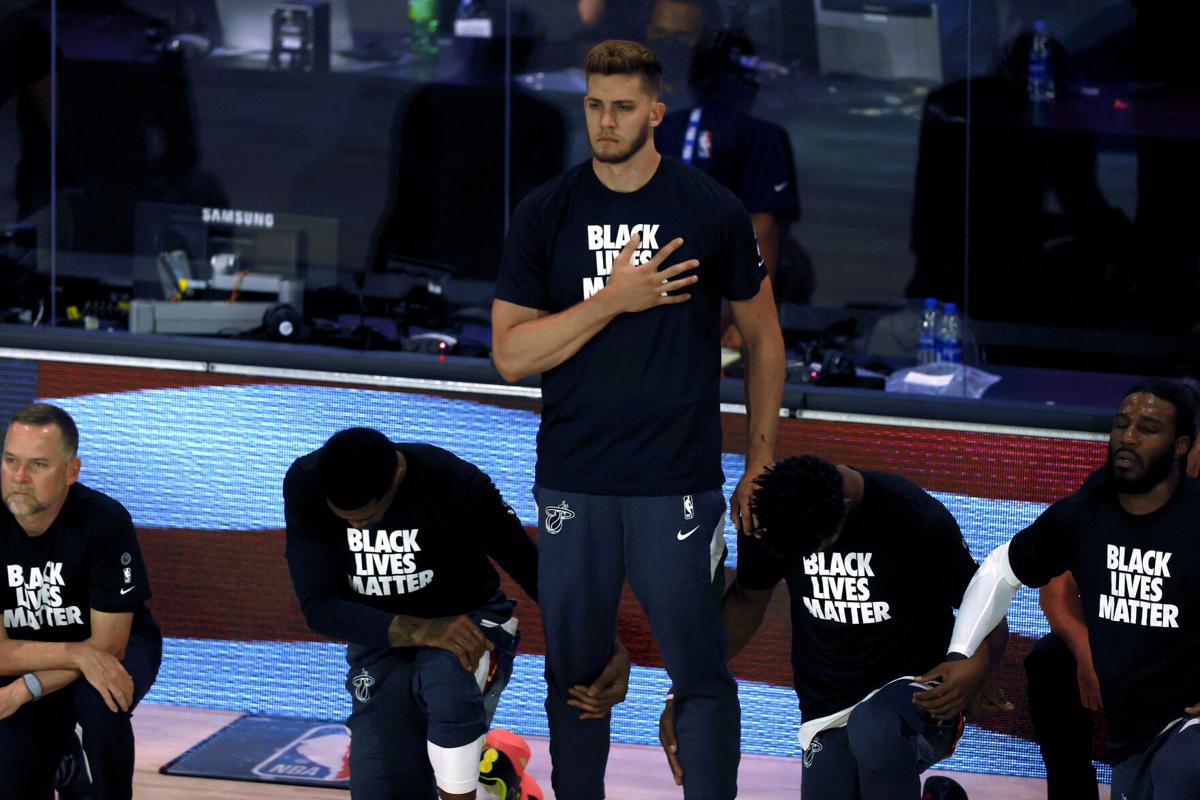 Miami Heat's Meyers Leonard stands during the national anthem before an NBA game against the Denver Nuggets Saturday in Lake Buena Vista, Fla. 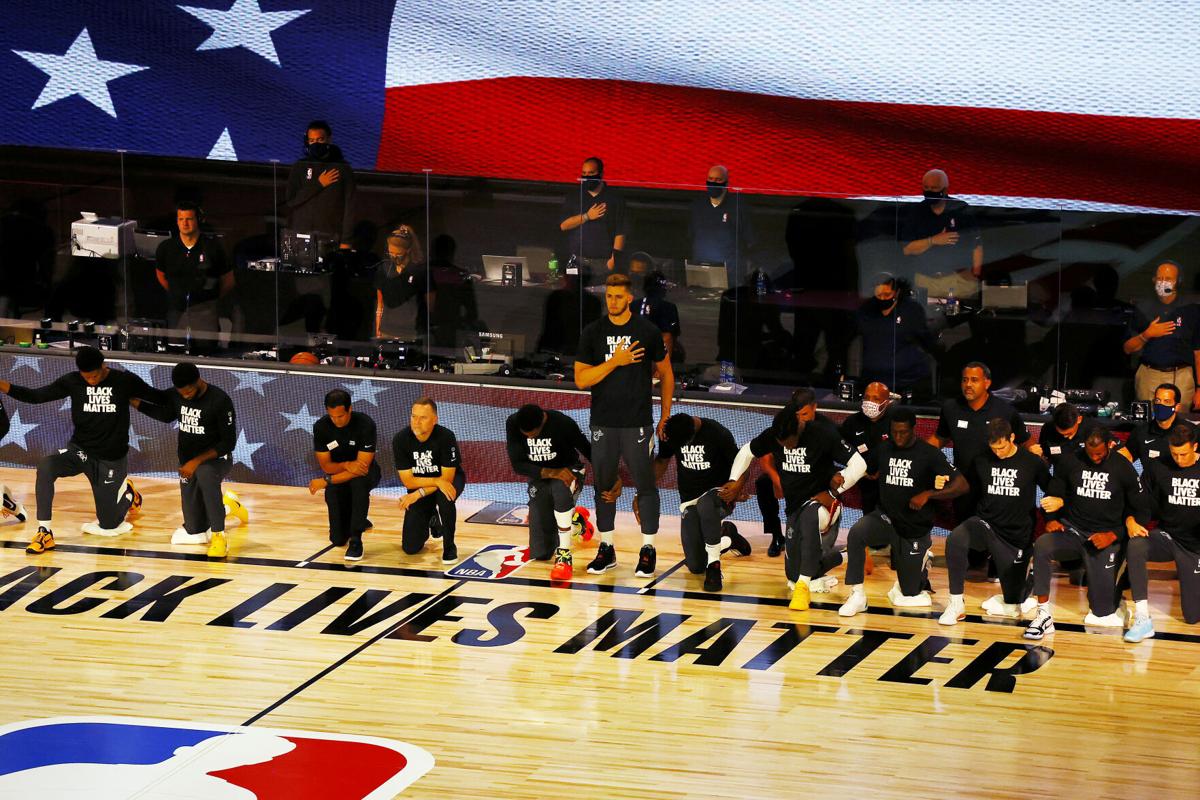 Miami Heat player Meyers Leonard stands during the national anthem before an NBA game against Denver on Saturday in Lake Buena Vista, Fla.

Miami Heat's Meyers Leonard stands during the national anthem before an NBA game against the Denver Nuggets Saturday in Lake Buena Vista, Fla.

Miami Heat player Meyers Leonard stands during the national anthem before an NBA game against Denver on Saturday in Lake Buena Vista, Fla.

LAKE BUENA VISTA, Fla. — Meyers Leonard has a brother who served two tours in Afghanistan with the U.S. Marines. He carries a military-themed backpack, wears combat boots and has a phone loaded with Navy SEALs who are his friends.

He also makes this clear: “I absolutely believe Black Lives Matter,” he said.

Still, Leonard simply could not bring himself to kneel for the national anthem.

Wearing a Black Lives Matter T-shirt over a jersey that he ordered to say “Equality,” and as all other coaches and players around him knelt, Leonard stood for the playing of “The Star-Spangled Banner” on Saturday before the Heat re-opened their season by facing the Denver Nuggets at Walt Disney World.

“Some of the conversations I’ve had over the past three days, quite literally, have been the most difficult,” Leonard said prior to the game. “I am with the Black Lives Matter movement and I love and support the military and my brother and the people who have fought to defend our rights in this country.”

Leonard dealt with anxiety and sleeplessness for several days as he agonized over the decision. He explained his reasoning before Saturday to current teammates and several former ones, almost all of them Black — then stood near midcourt, hand over his heart, as the song blared.

“I am a compassionate human being and I truly love all people,” Leonard said. “I can’t fully comprehend how our world, literally and figuratively, has turned into Black and white. There’s a line in the sand, so to speak: ‘If you’re not kneeling, you’re not with us.’ And that’s not true.

“I will continue to use my platform, my voice and my actions to show how much I care about the African American culture and for everyone,” he added. “I live my life to serve and impact others in a positive way.”

The focus of this restarted NBA season, interrupted for more than 4½ months by the coronavirus pandemic, has been to continue shining light on the need for racial justice and an end to police brutality. NBA teams are kneeling, often linking arms, for the pre-recorded national anthem along a sideline where “Black Lives Matter” is painted.

Orlando Magic forward Jonathan Isaac, who is Black, stood for the anthem before his team’s game Friday and opted not to wear the ‘Black Lives Matter’ shirt that players and coaches have donned at Disney for the pregame ceremony.

Former Missouri standout Michael Porter Jr., who made some controversial comments about the seriousness of the coronavirus earlier this week, initially posted to Instagram in support of Isaac, although he later deleted the post. Porter also retweeted contentious sports pundit Clay Travis, who tweeted out an article on Isaac’s decision from the website to which he contributes, Outkick.

Later Friday, San Antonio coach Gregg Popovich and Spurs assistant Becky Hammon both stood for the anthem. Popovich, a graduate of the United States Air Force Academy, stood with arms at his side. Hammon draped her arms over the shoulders of fellow assistant Will Hardy and Spurs guard Patty Mills.

“I did feel a little bit of a load lifted off my shoulders when they did that,” Leonard said. “Each of those individuals had their own personal reasons, just as I do.”

Heat captain Udonis Haslem had multiple conversations with Leonard in recent days about his decision. Haslem has made several things clear; he originally wished to see Leonard kneel, but after those talks he came away with understanding — and vowed the Heat would support their teammate.

As the song ended, Haslem was the first to tap fists with Leonard.

Haslem has seen Leonard’s commitment to helping others. Leonard raised $180,000 in April by streaming himself playing video games online; that money went to causes such as Feeding South Florida, a group with which Haslem and the Heat worked closely.

And Saturday, Leonard said he and his wife will donate $100,000 to a fund that helps pay the fees Floridians leaving jails or prisons must settle before they can have their voting rights restored.

“Because I’ve listened to Udonis and am constantly inspired by him, every single one of those dollars will go to Overtown and Liberty City, where he grew up,” Leonard said, referring to two of Miami’s historic Black neighborhoods. “Those two parts of Miami were most heavily impacted by COVID-19 and voter suppression.”

Heat forward Jimmy Butler also tried to make a statement Saturday, walking onto the court with a jersey without any name on the back. He unsuccessfully lobbied the NBA to play in a jersey with just a number, and had to switch into a jersey with his name before the game could begin.

Former teammates have warned Leonard that he may deal with criticism, possibly from fellow NBA players. His eyes welled with tears many times in recent days as he worked through the decision, his reaction so strong that he was shaking when he explained his choice to Heat teammates.

It was not an easy decision. It may not be popular.

But Saturday morning, a few hours before the anthem, Bailey Leonard, the former Marine, texted his brother and said, “Stay true to you. Stay the course. I love you. Your family loves you. Your community loves you.”

If Leonard had any doubt, it evaporated there.