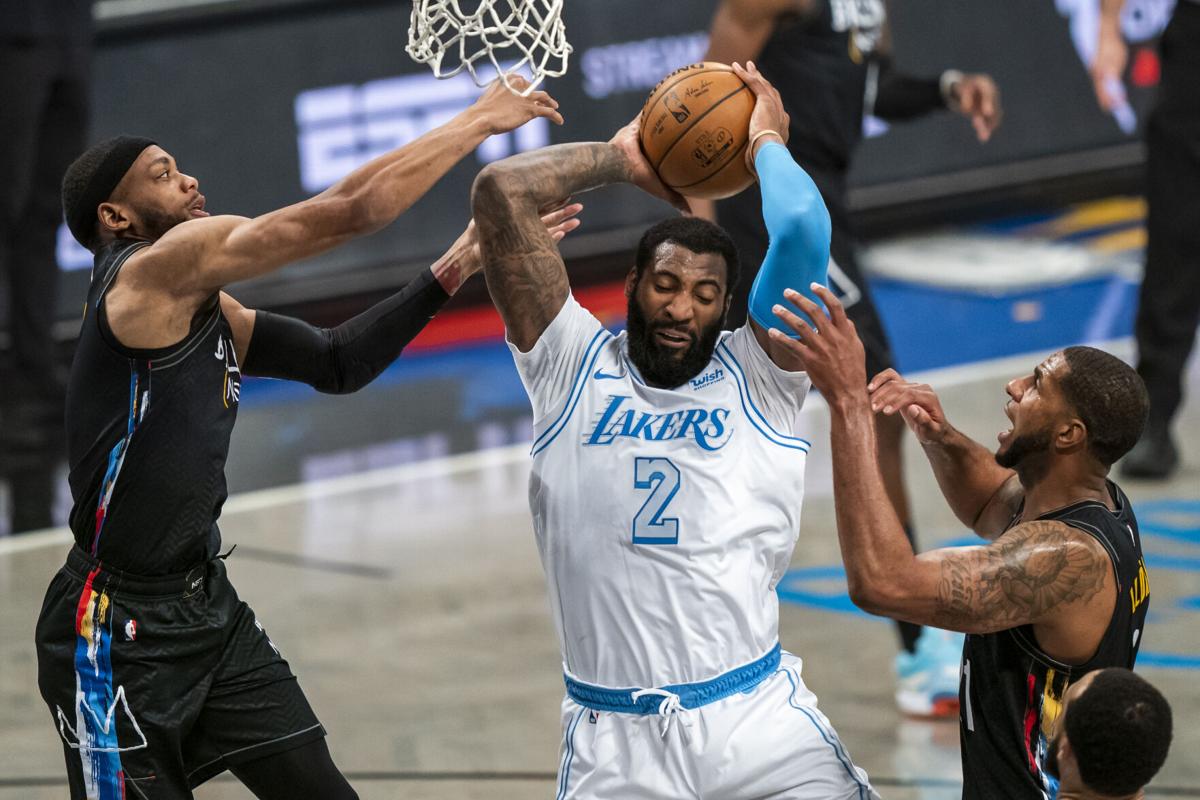 Los Angeles Lakers center Andre Drummond (2) grabs a rebound between Brooklyn Nets forward Bruce Brown, left, and center LaMarcus Aldridge during the first half of their game Saturday in New York. Drummond scored 20 points as one of eight Lakers in double figures as they won 126-101. 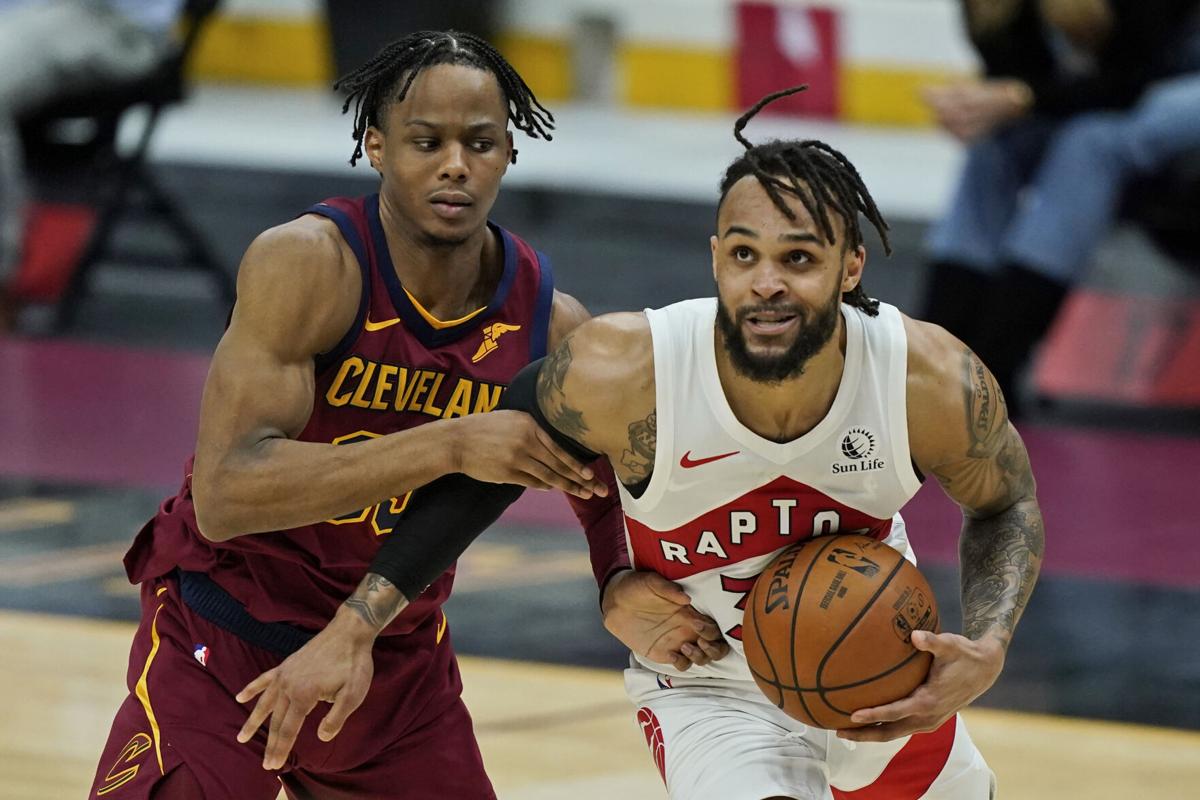 Toronto Raptors guard Gary Trent Jr., right, drives to the basket against the Cleveland Cavaliers forward Isaac Okoro in the second half of their game Saturday in Cleveland. Trent popped off for a career-best 44 points in the Raptors’ 135-115 win.

Los Angeles Lakers center Andre Drummond (2) grabs a rebound between Brooklyn Nets forward Bruce Brown, left, and center LaMarcus Aldridge during the first half of their game Saturday in New York. Drummond scored 20 points as one of eight Lakers in double figures as they won 126-101.

Toronto Raptors guard Gary Trent Jr., right, drives to the basket against the Cleveland Cavaliers forward Isaac Okoro in the second half of their game Saturday in Cleveland. Trent popped off for a career-best 44 points in the Raptors’ 135-115 win.

In New York, Andre Drummond had 20 points and 11 rebounds, Dennis Schroder scored 19 points before he and Kyrie Irving were ejected in the third quarter and the Los Angeles Lakers beat the Brooklyn Nets 126-101 on Saturday night.

A nationally televised matchup already missing plenty of star power lost even more when Irving started jawing with Schroder and neither player stopped quickly enough for the officials.

The Lakers had led most of the way and were ahead 66-62 when Irving fouled Schroder with 9:41 left in the third. Los Angeles blew it open soon after the ejections with a 15-2 burst to open an 88-71 lead.

A potential NBA Finals preview had a preseason feel with so many top names unavailable. LeBron James (right ankle sprain) and Anthony Davis (right calf strain) remain out for the Lakers, while James Harden is sidelined with a strained right hamstring for the Nets.

The Lakers handled being short-handed much better, putting eight players in double figures. Ben McLemore, in his second game with Los Angeles, scored 17.

Kevin Durant scored 22 points in his second game back following a 23-game absence with his own hamstring injury. Irving added 18, but the Nets had their nine-game home winning streak snapped.

Besides James and Davis, who were sitting on the bench, the Lakers were also without Kyle Kuzma (left calf strain), Marc Gasol (left hamstring tightness) and Wesley Matthews (right Achilles tendon tightness).

The Lakers have fallen to fifth in the Western Conference during James’ 11-game absence, while the Nets entered play leading the East. Both teams have upgraded from the buyout market in hopes of deep playoff runs, with the Lakers adding Drummond and Brooklyn signing LaMarcus Aldridge and Blake Griffin.

The defending champions’ defense sure looked playoff-ready, holding the NBA’s highest-scoring team 18 points below its season average. And they showed off some postseason physicality, with Markieff Morris getting a flagrant foul in the first half for elbowing Irving.

The Lakers also had their offense rolling early, starting 7 for 8 to build an 18-7 lead. Schroder made his first six shots for 16 points.

The Nets bounced back by shooting 63% in the second quarter, cutting it to 61-58 at halftime.

Trent made 17 of 19 field goals, including shooting 7 of 9 from 3-point range, and went 3 of 3 from the foul line in 33 dynamic minutes. The third-year pro was acquired from Portland with Rodney Hood on March 25 for Norman Powell.

The Raptors, who built an 84-46 lead late in the second quarter, were without their top three scorers in Pascal Siakam (rest), Fred VanVleet (left hip flexor strain) and Kyle Lowry (right foot infection), who are averaging a combined 57.5 points.

Collin Sexton scored 29 points and Darius Garland had 19 points and eight assists for Cleveland, whose starters didn’t grab a rebound until 5:16 remained in the second quarter. Isaiah Hartenstein had 12 points, eight boards and six assists.

Trent scored 25 points and Anunoby had all 15 of his points in the opening half — combining to make 14 of 16 field goals and 8 of 9 3-pointers — as Toronto went into the break up 87-54. The Raptors set the record for a Cavaliers opponent for points in a half.

Toronto notched its season high in a quarter in leading 47-26 after the first, capped by Watanabe’s 3-pointer at the buzzer. All nine Raptors who played in the period had at least one basket.

Toronto wraps up a stretch of nine games in 15 days Sunday at New York. Coach Nick Nurse said Siakam will play and Lowry could return against the Knicks.

Jazz 128, Kings 112: Donovan Mitchell scored 14 of his season-high 42 points in the fourth quarter and the Utah Jazz beat the Sacramento Kings in Salt Lake City, extending their franchise-record home winning streak to 24 games.

Mitchell tallied his 18th 30-point game this season, but it took him a while to heat up after a slow start. But his ability to penetrate the lane on almost every possession powered a 19-4 run in the fourth quarter. Mitchell has scored 41, 37 and 42 points in his last three games.

Mike Conley had 26 points, and Joe Ingles added 20 as the Jazz scored 69 points in the second half to power past Sacramento.

De’Aaron Fox scored 30 points and Richaun Holmes 25 to lead the Kings, who have lost six in a row.

The final score belied the topsy-turvy nature of the game as the lead changed 17 times and the Kings often made the vaunted Jazz defense look porous and slow, especially the lightning-quick Fox and active Holmes

Moe Harkless, who reached double figures (11 points) for just the second time this season and had a season-high seven rebounds, drove for a layup to put the Kings up 84-74 midway through the third quarter.

Ingles, who had a running conversation with several Kings, emphatically shouted after each of his three 3s powered Utah’s 24-5 run that gave the Jazz a 98-89 lead early in the fourth period.

Once looking like playoff hopefuls, the Kings’ skid includes losses to Detroit, which has the worst record in the Eastern Conference and Minnesota with the worst mark in the Western Conference.

Harrison Barnes said earlier in the week that there was “no tomorrow” for the Kings and they played like it until they couldn’t match the explosive Jazz at the end.

Harkless hit two 3s to spark the Kings to a quick 12-1 lead as the Jazz missed their first eight field goal attempts. But the Jazz hit four straight 3s — Conley and Niang each made a pair — and the Jazz had the lead by the end of the first quarter, 34-31.

Holmes had 21 points, a career high for a half, and Fox added 18 as the hot-shooting Kings took a 65-59 lead into halftime.

Mitchell was 5 of 28 from 3-point range coming into this game and missed all five 3s in the first half, but hit back-to-back 3-pointers just after halftime. Down the stretch, he concentrated on going to the basket with success and matched his career high with 15 free throws.

76ers 117, Thunder 93: Joel Embiid had 27 points and nine rebounds and the Philadelphia 76ers beat the Oklahoma City Thunder in Oklahoma City to pull even with Brooklyn for the Eastern Conference lead.

On Friday night in a loss at New Orleans, Embiid went just 5 for 16 from the floor and scored 14 points. He was 10 for 17 in three quarters of work against the Thunder.

Furkan Korkmaz added a season-high 20 points for the 76ers.

Darius Bazley had 17 points and nine rebounds, and Tony Bradley added 16 points and 14 rebounds for Oklahoma City. The Thunder have lost six straight.

The 76ers led 66-53 at halftime. Embiid made just one of his first four shots, but he went 6-for-6 the rest of the first half and finished it with 21 points. The 76ers led despite making just 5 of 21 3-pointers before the break. The 76ers led 90-76 heading into the fourth quarter.

Deandre Ayton had 14 points and 10 rebounds, Chris Paul added 13 points and 10 assists and Phoenix had only three turnovers to tie the franchise record. The Suns have won 17 of their last 21 games and are 37-15 overall.

Raul Neto had a career-high 24 points for the Wizards, and Russell Westbrook added his NBA-leading 22nd triple-double with 17 points, 14 assists and 11 rebounds. They played without NBA scoring leader Bradley Beal.

There were 13 ties and 10 lead changes in the first half. Jae Crowder hit a 3-pointer with a second left in the second quarter to give the Suns a 57-55 halftime advantage.

The Suns opened the third quarter with a 21-4 run. Booker had 10 points in that stretch.

Beal sat out the game because of back tightness.

Warriors 125, Rockets 109: Stephen Curry scored 23 of his 38 points in the third quarter and the Golden State Warriors withstood another injury to rookie James Wiseman to beat the Houston Rockets in San Fransisco.

Curry has his sixth straight 30-point game, the longest streak of his career. The two-time MVP made eight 3-pointers and had five assists and eight rebounds.

John Wall had 30 points and seven assists for Houston. Kelly Olynyk added 18 points and 11 rebounds. The Rockets have lost nine of 11.

Curry had five 3s and scored Golden State’s final 20 points in the third quarter. He also made a brilliant three-point play that left Wall stunned.

Curry dribbled around Wall near the arc, bounced the ball behind his back to his right hand then banked in the lay-up and was fouled. The two-time MVP, who playfully flexed during pre-game introductions, ran up the nearby stands then returned to the court and made the free throw to make it 80-65.

Wiseman, the second overall pick in the draft who missed 11 games earlier this season with a wrist injury, was shaken up in the second quarter when his dunk attempt was blocked hard by KJ Martin. Wiseman fell awkwardly on his right side and got up limping before being taken to the locker room for further examination on his right knee

Houston trailed by 20 and got to 105-93 on D.J. Augustin’s 3-pointer. Wiggins, who had 19 in the first half, made two free throws, Mychal Mulder followed with a layup and the Warriors pulled away.

Trail Blazers 118, Pistons 103: Enes Kanter had 24 points and a franchise-record 30 rebounds, and the Portland Trail Blazers routed the Detroit Pistons in Portland, Oregon.

Kanter bested Sidney Wicks' Portland record of 27 rebounds set in 1975. Kanter also surpassed his own career high of 26 set while with the Knicks in 2018. Each time he added to the record the Blazers' bench stood and cheered.

Damian Lillard had 27 points and 10 assists and CJ McCollum added 26 points for the Blazers, who snapped a two-game losing streak.

Josh Jackson had 21 points for the Pistons, who trailed by as many as 24 points. Frank Jackson finished with 17 points

Center Jusuf Nurkic was not available for the Blazers because it was the first of a back-to-back. The starting center had knee swelling that kept him out of a game earlier this week against the Clippers. Blazers coach Terry Stotts said before the game that Nurkic would be available for Sunday night's game at home against Miami. Kanter started in Nurkic's place.

The Pistons, also playing the first of a back-to-back, rested Wayne Ellington. Mason Plumlee returned after missing Thursday night's victory at Sacramento because of concussion protocol.

Portland led 59-50 at the break. Kanter had 11 points and 16 rebounds, while Lillard led all scorers with 14 points.

CJ McCollum's floater put the Blazers up 74-59 in the third quarter and they stretched the lead to 97-76 early in the final period on Derick Jones Jr.'s tip shot.

AP source: No cutting players because they are unvaccinated