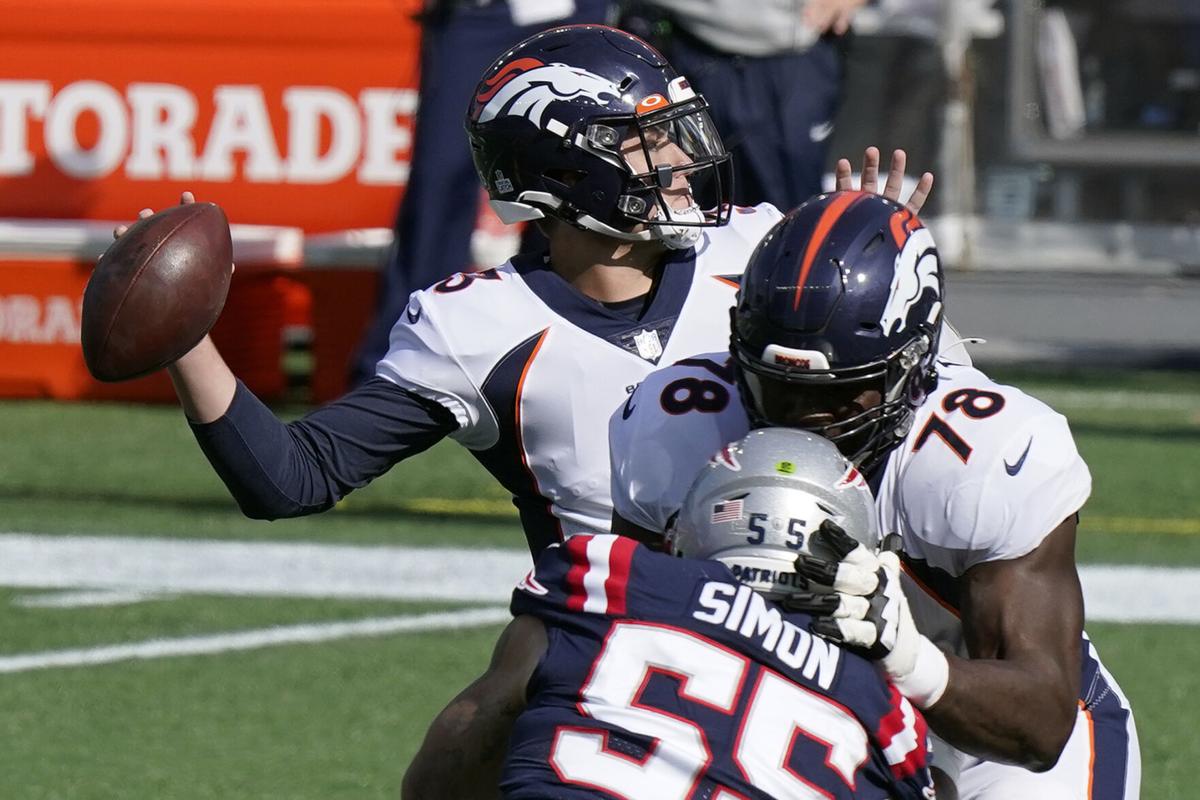 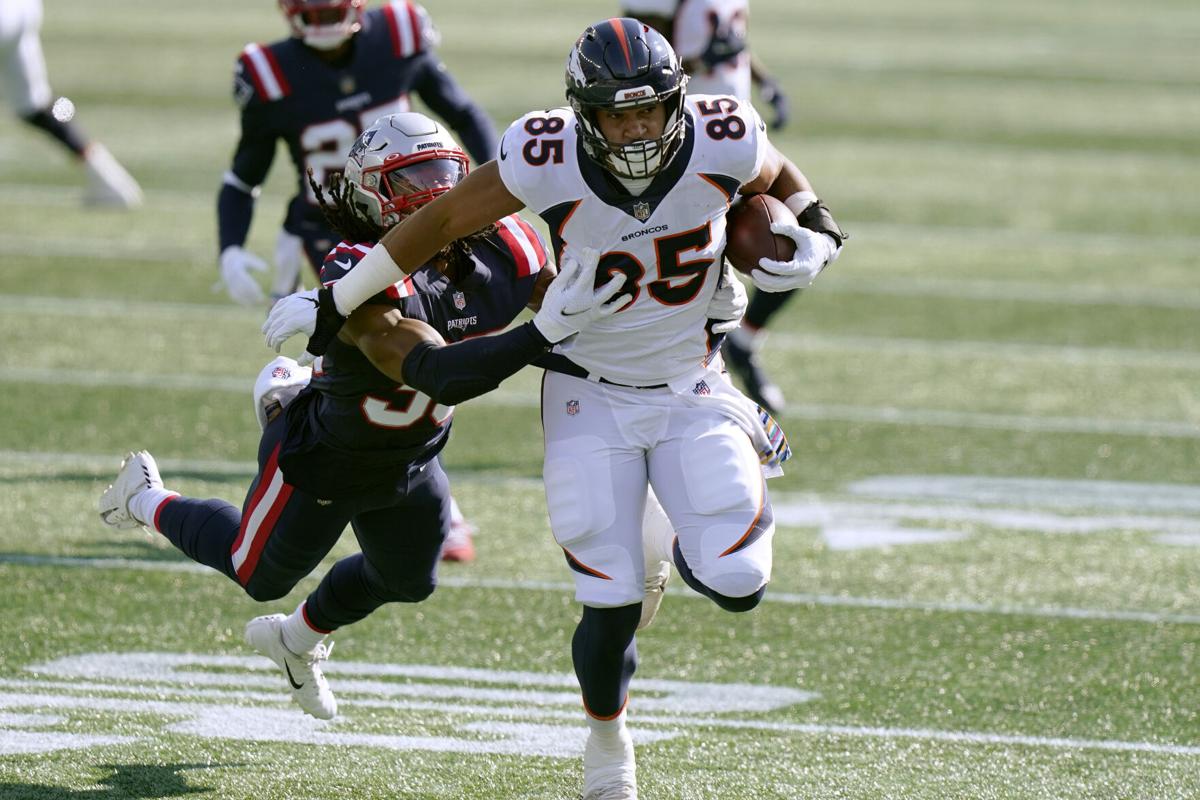 Former Tiger and current Denver Broncos tight end Albert Okwuegbunam tries to run away from New England Patriots defensive back Kyle Dugger, left, after catching a pass in the first half of an NFL game in Foxborough, Mass. 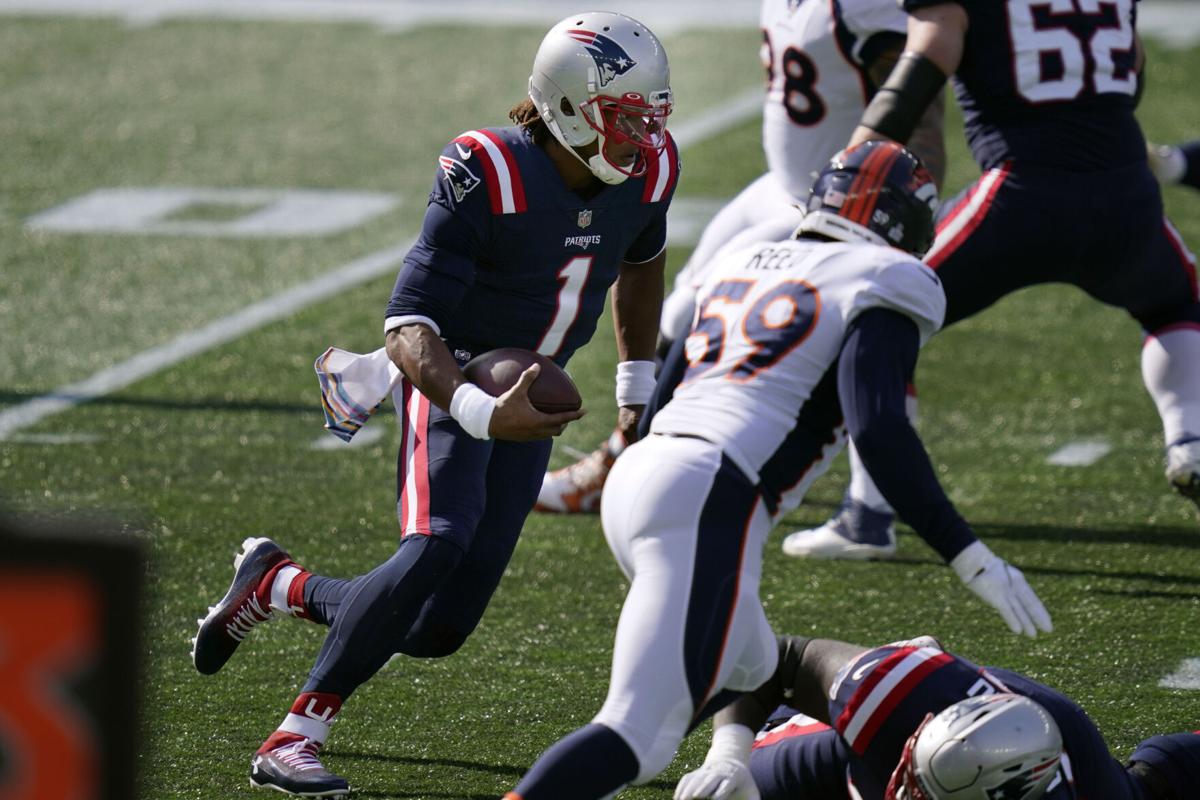 New England Patriots quarterback Cam Newton runs for yardage against the Denver Broncos in the first half of an NFL game Sunday in Foxborough, Mass.

Former Tiger and current Denver Broncos tight end Albert Okwuegbunam tries to run away from New England Patriots defensive back Kyle Dugger, left, after catching a pass in the first half of an NFL game in Foxborough, Mass.

New England Patriots quarterback Cam Newton runs for yardage against the Denver Broncos in the first half of an NFL game Sunday in Foxborough, Mass.

FOXBOROUGH, Mass. — The Denver Broncos waited two weeks to finally play again and they were rewarded with their biggest win of the season.

Brandon McManus had six field goals and linebacker Malik Reed came up with a big sack late to help the Broncos hold on for an 18-12 win over the New England Patriots on Sunday in a game twice delayed following positive coronavirus tests for both teams.

“This was definitely a special moment,” McManus said.

Sunday’s game was originally scheduled for last week but got postponed twice. The delay was caused after multiple Patriots players tested positive for COVID-19, including quarterback Cam Newton and reigning Defensive Player of the Year Stephon Gilmore.

New England (2-3) rallied from an 18-3 deficit and nearly pulled off the comeback, but committed three turnovers. This is the first time the Patriots have had a first losing record after five games since the 2001 season.

Former Missouri quarterback Drew Lock finished 10-of-24 for 189 yards in his first start since injuring his shoulder in Denver’s Week 2 loss to Pittsburgh. He was steady early, but had back-to-back interceptions in the fourth quarter to let the Patriots back into the game.

“We knew that we could be a really good team,” Lock said. “It’s hard to come up to Gillette and win, better yet win without scoring a touchdown.”

Denver’s defense entered the game with two takeaways on the season. It forced three on Sunday, coming up with two interceptions and a fumble recovery.

“They are a tough-minded group of people. I think that was on display today,” Broncos coach Vic Fangio said.

Denver’s defensive effort underscored a rough day for New England, which was held to 288 yards.

It was the first game back for Newton, who returned after missing New England’s Week 4 loss at Kansas City. He finished 17 of 25 for 157 yards. He also rushed 10 times for 76 yards and a touchdown. Though both of his interceptions came off tipped balls, he said neither that nor his bout with COVID absolved him of his mistakes.

“The time off showed, but I have to be better. And I will be better,” he said.

Denver (2-3) won despite a 17-day layoff between games and being without leading rusher Melvin Gordon and top pass catcher Noah Fant, who was out with an ankle injury. Phillip Lindsay started in Gordon’s place and rushed 23 times for 101 yards. Tim Patrick had four catches for 101 yards.

McManus, who connected on field goals of 52 and 54 yards, now has six games with multiple 50-yard field goals. That is tied with Baltimore’s Justin Tucker for the most in NFL history.

The Patriots’ layoff was 13 days and because of the COVID cases, they had only one true practice after shutting down their facility multiple times.

The Patriots closed the gap to 18-9 on a 1-yard touchdown run by Newton with 8:31 left in the fourth. But he was stopped short on the ensuing 2-point conversion.

New England got another chance when Lock’s pass intended for Patrick was picked off by J.C. Jackson and returned 30 yards to the Denver 25. Nick Folk connected on a 38-yard field goal four plays later to make it 18-12 with 3:23 remaining.

Denver’s ensuing drive lasted just one play when another long pass attempt from Lock to Patrick was intercepted by Jonathan Jones.

Newton went to work, connecting with Julian Edelman for a 22-yard gain to get to the 50.

After a trio of short passes, Newton then plowed forward for 4 yards on fourth-and-1 at the Denver 41 to keep the drive going.

Newton was then involved in a trick play when Edelman found him on a 16-yard gain to get inside the Denver 25.

But that momentum was slowed when Reed sacked Newton for a 6-yard loss. Newton got it back with a 6-yard pass to James White setting up a fourth-and-10 on the Denver 24.

Receiver N’Keal Harry got separation, but Newton’s pass was well wide, turning the ball over on downs.

“Just have to be better. Simple,” Newton said.Scoring points

Patriots: Right tackle Jermaine Eluemunor needed assistance getting off the field after an ankle injury late in the first quarter and didn’t return. … Defensive lineman Adam Butler left in the second quarter with an elbow injury.

Denver returns home to host the Chiefs next Sunday.

The Patriots host the 49ers next Sunday.