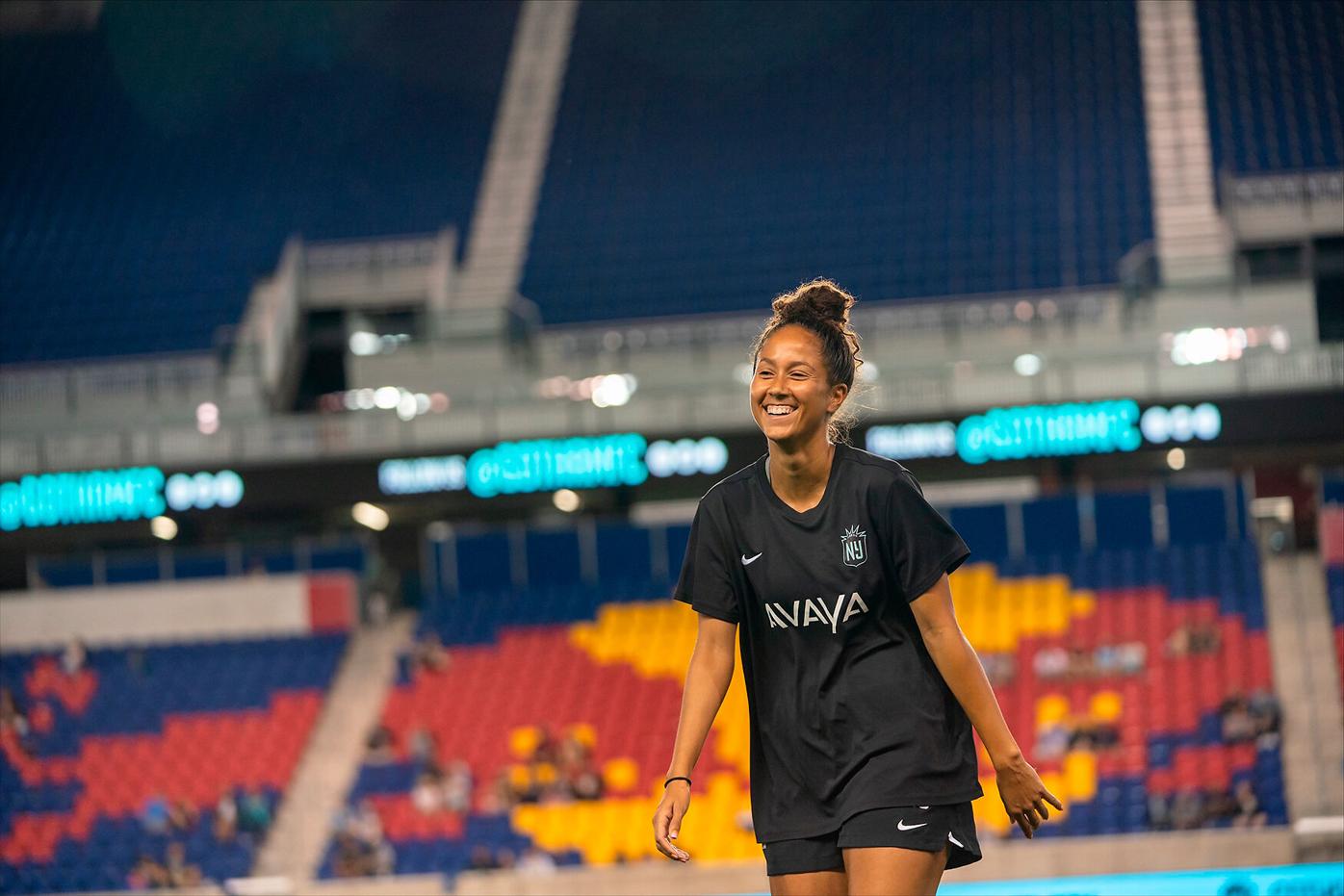 New Jersey-New York Gotham FC midfielder Domi Richardson walks on to the field. Richardson and her teammates gathered Oct. 6 to show support for two NWSL players who alleged sexual coercion and abuse from their former coach. Richardson played at Missouri from 2010-13. 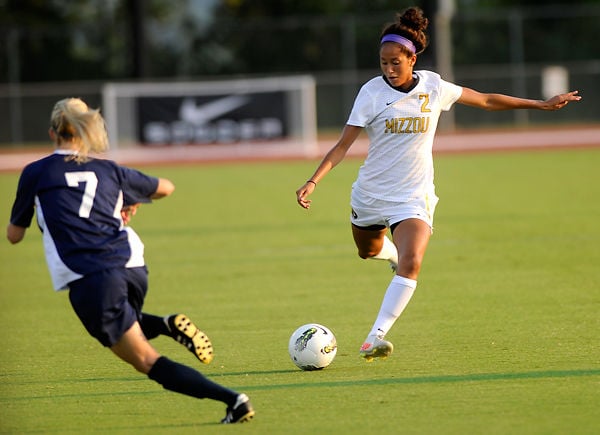 New Jersey-New York Gotham FC midfielder Domi Richardson walks on to the field. Richardson and her teammates gathered Oct. 6 to show support for two NWSL players who alleged sexual coercion and abuse from their former coach. Richardson played at Missouri from 2010-13.

Domi Richardson didn’t start the match, nor did she play throughout the 90 minutes.

Still, she found herself on the pitch for the most important moment of New Jersey-New York Gotham FC’s match against the Washington Spirit on Oct. 6 in Chester, Pennsylvania. In front of Carli Lloyd’s hometown fans as part of her pre-retirement farewell tour about 30 miles from her native Delran, New Jersey, all that was an afterthought in the sixth minute at Subaru Park.

That moment on the field was more than a game for Richardson, who played at Missouri from 2010-13.

She and the rest of the players — both on the field and on the bench, from both teams — gathered, arms around each other, in the center circle to applause from the fans.

Players around the NWSL picked the the six-minute mark to congregate and show support for Sinead Farrelly and Mana Shim after the pair endured six years of silence after suffering alleged sexual coercion and abuse from former Portland Thorns and North Carolina Courage coach Paul Riley.

“It was a really, really powerful moment,” Richardson said in an interview with the Missourian. “I think that just looking around the circle, you (could) see that both teams have been through it this year a little bit, but just being able to come together and represent our league and start a trend around the league, it was really impactful.”

Players in the other two matches that evening followed suit and gathered at midfield, and similar displays of solidarity were seen across the globe.

Riley was fired by the Courage after the allegations were published by The Athletic, and his coaching license was revoked by U.S. Soccer in the aftermath of the report. He has denied any wrongdoing.

Gotham and the Spirit played in the first NWSL match after the accusations were made public. At the request of the NWSL Players Association, play was suspended the weekend following the publication of The Athletic’s report.

The ramifications of the report have been far-reaching. The NWSL, U.S. Soccer and FIFA have opened investigations into the allegations. The Thorns, who employed Riley and investigated the allegations levied against him before opting not to renew his contract and thanking him for his work with the club, placed general manager Gavin Wilkinson on administrative leave while investigating his role.

League commissioner Lisa Baird resigned following the publication of the allegations. Baird later said in a statement that she was “proud” of her work to “make the league better.” She was told of the accusations in April.

Players who could potentially play in the NWSL have an uneasiness about the situation in the league.

“I was very grossed out,” current Missouri forward Julissa Cisneros said. ... “I just couldn’t believe it, but it’s someone’s reality.”

Cisneros emphasized the importance of being quick to listen in these situations, and listening has been at the forefront of attention.

Several teams have worn “No More Silence” shirts in warmups, with signs in the stands reading the same message and the campaign going viral on social media.

Similar accusations to those made by Shim and Farrelly have been made by players in Australia and Venezuela since the report was published.

“I think the fact that Mana and Sinead were able to come forward gave all those other girls around the world a voice,” Richardson said. “The whole point is that you can take your power situation, and you can move forward. … It takes really brave people to speak up to push the change forward.”

Richardson and the rest of her team found out about the news on a bus to Louisville, Kentucky. The team read the article en route to a match that was postponed, all becoming aware of the allegations around the same time.

Richardson said her team was “shocked” about the allegations, and that the team talked and made sure they could all come to each other so they didn’t need to “keep silent.”

“It was really heavy,” Richardson said. “We were able to talk about it and make sure we did the right thing moving forward to honor (Shim and Farrelly) and to honor the people that felt like they haven’t got a chance to speak up.

… “I think that’s the point of being on a team, right? It’s to have people that can come alongside you and lift you up when you feel like you’re down.”

Richardson and Gotham were already in Louisville by the time the weekend matches were postponed. Gotham manager Scott Parkinson recognized the gravity of the situation. Since the match was postponed, he gave the players the option to train or take some time to rest and process the situation and the emotions players were experiencing in light of the news.

“(Parkinson) is so player-focused and making sure that we’re taken care of and getting the things that we need,” Richardson said. ... “Our coaching staff has just been amazing throughout this whole process.”

Improvements for the players in the league go beyond the recent controversies.

The hope among players is that the NWSL becomes a more player-first and player-focused organization. For Richardson, that includes the next commissioner, whoever they may be.

Richardson said that the players haven’t always been at the forefront of the priorities. She noted the minimum salary being around $6,000 when she first entered the league in 2014.

“Without the players, you have no product,” Richardson said. ... “The commissioner that we want needs to make sure that the players’ livelihood is at the front of the list for things that they need to take care of.”

The future of the league was cast into uncertainty following the publication of the allegations against Riley, and that uncertainty was accelerated after Baird’s resignation. In the midst of the postseason push, play was stopped and questions filled the void left by the empty stadiums, fixtureless matchdays and occupied the newly vacant commissioner’s desk.

Questions about the future of the NWSL and the culture and foundations of the league were pushed to the forefront of national attention.

“I think a lot of people just want to make sure that the league is sustained and kept going forward so that we can have it for a long time,” Richardson said. “I think that’s what made it harder for some people to speak out. I think now the culture moving forward is that we won’t be like that. People won’t be afraid to speak up.”

Much of the NWSLPA’s and the league’s focus has shifted to the future. The NWSLPA released a list of demands including investigations of abuse at each of the 12 clubs, potential neglect in previous investigations and a PA check into potential abuse from coaches, general managers and front office staff.

It’s no secret that the NWSL has been unstable at times, with questions as to whether it would survive or join its two predecessors — WUSA and WPS — in the professional soccer graveyard, and criticism of the league has hit an all-time high since the allegations against Riley came out.

As that change comes, Richardson hopes the league comes out stronger than before.

“Everybody is just super resilient and able to move forward and make sure we have the right pieces in the right spot,” she said. “I don’t see the league stopping any time soon. If anything, I see it picking up speed.”

USWNT manager Vlatko Andonovski said the day before Richardson and the rest of the Gotham and Spirit players demonstrated at midfield in Chester that the league “failed at the most important thing.” Gotham midfielder McCall Zerboni told the ‘Today Show,’ “How can we have faith and trust in our employer when they have allowed this to happen?”

Above all, Richardson said there needs to be accountability. Outside of Farrelly and Shim’s story, there have been other controversies surrounding the NWSL this season. In Washington, former coach Richie Burke was fired for harassment and creating a “toxic work culture” for the players according to The Washington Post.

Spirit owner Steve Baldwin said he plans to sell the team after supporters and his own players alike called for him to do so. These calls came in light of Baldwin hiring Burke despite him appearing underqualified and after complaints of a former player who said he verbally abused his players, including the use of homophobic slurs.

The allegations against Riley, paired with the reports and investigations into their own clubs, made the match between Gotham and the Spirit in Chester all the more emotional for Richardson and the rest of the players.

“This sport, as much as it is our business, we spend a lot of time together,” Richardson said. “You can’t have people interrupting that cohesion during the year, and I think just moving forward we need people that will do a good job of stewarding that.”

Defense lifts Dallas to a 27-17 victory over sinking Saints

LeBron James out of COVID-19 protocols, cleared to return

No. 1 Georgia looks to become top dog over Alabama in SEC