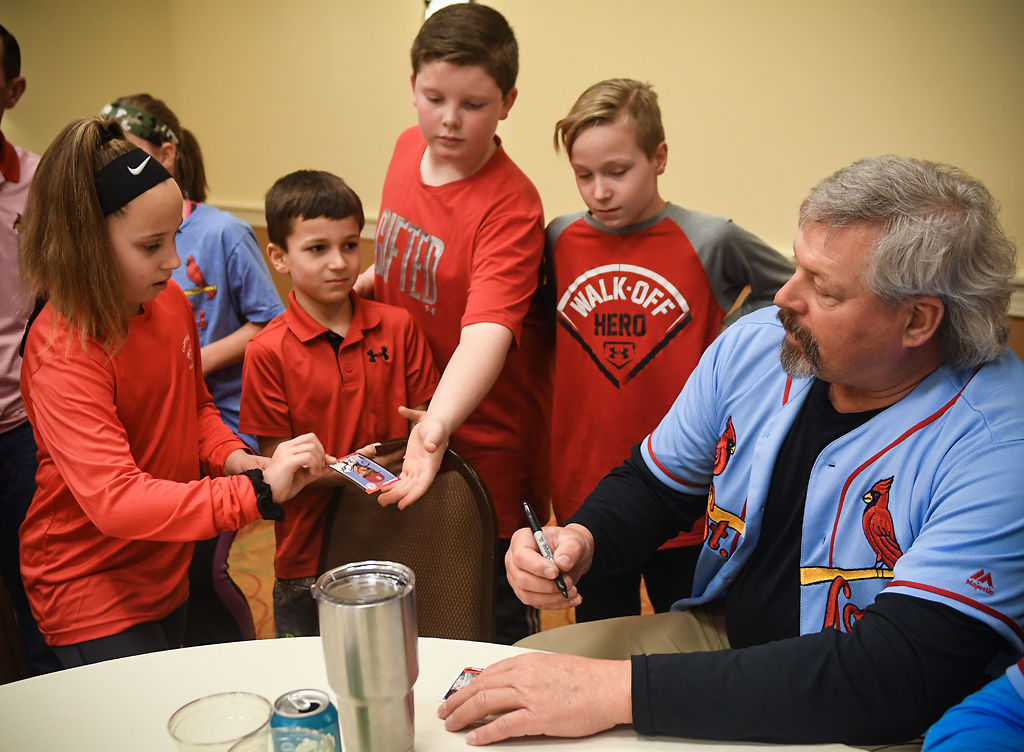 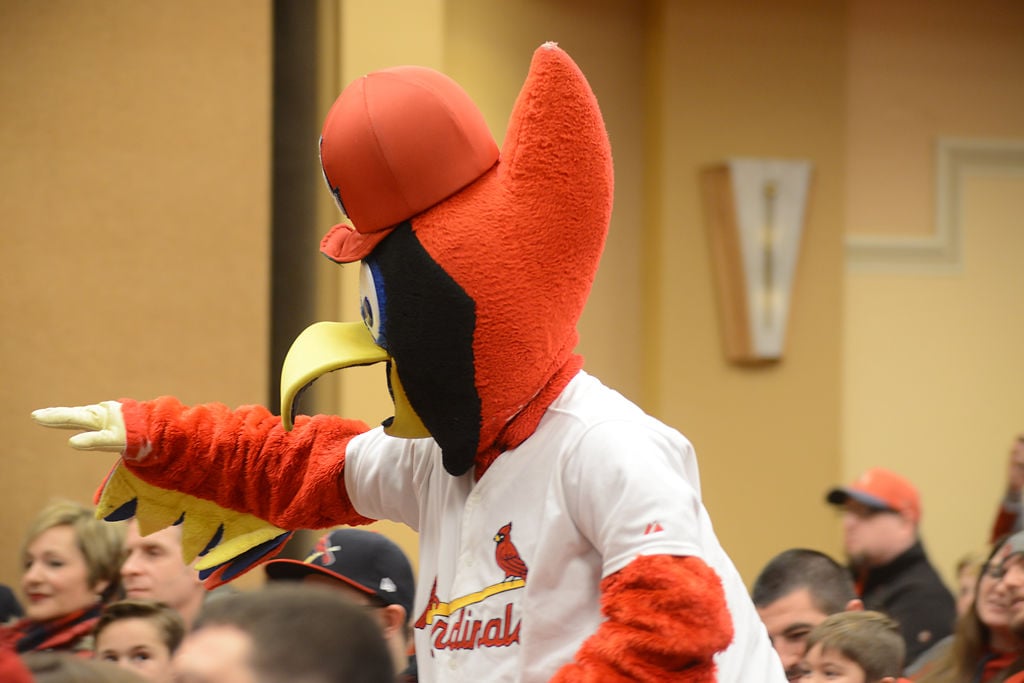 Fredbird made an appearance during the Cardinals Caravan on Saturday in Columbia. Five current Cardinals and two former Cardinal greats visited with fans during the Caravan. 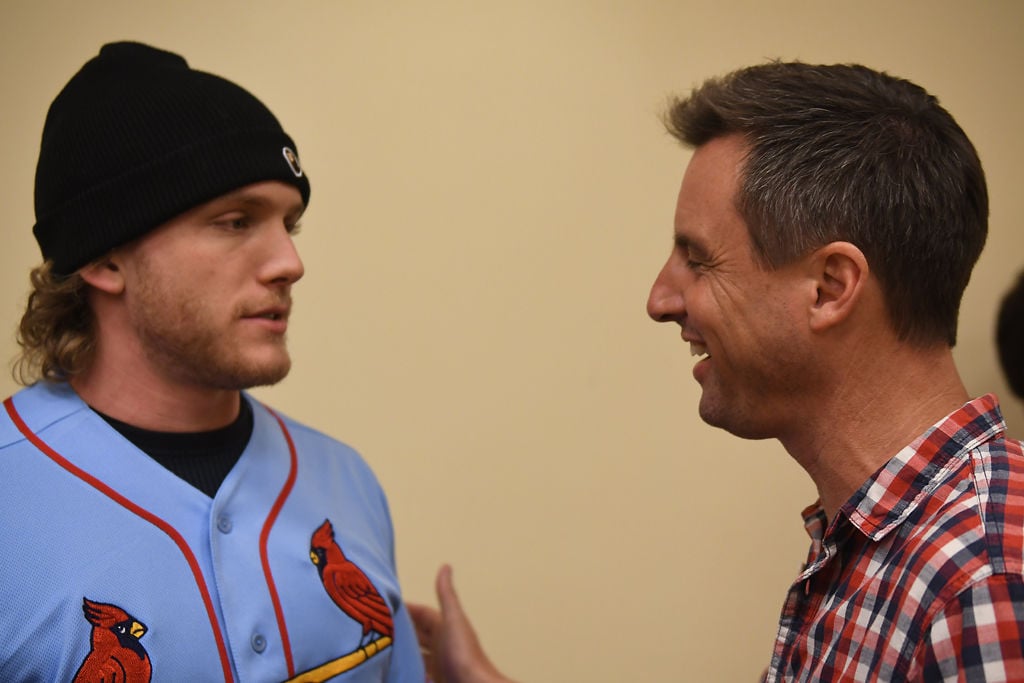 Bill Costello talks to St. Louis Cardinal's Harrison Bader during the Cardinals Caravan on Saturday in Columbia. "I've been a Cardinal fan my entire life and it's great having these guys here," Costello said. "There is lots of energy around the team and this is going to be a great year."

Fredbird made an appearance during the Cardinals Caravan on Saturday in Columbia. Five current Cardinals and two former Cardinal greats visited with fans during the Caravan.

Bill Costello talks to St. Louis Cardinal's Harrison Bader during the Cardinals Caravan on Saturday in Columbia. "I've been a Cardinal fan my entire life and it's great having these guys here," Costello said. "There is lots of energy around the team and this is going to be a great year."

We all miss baseball. The snowstorm that’s ripping through the Midwest and now the east coast makes it hard to get into the baseball mindset.

Plus, a conference championship weekend headlined by Tom Brady’s Patriots and Patrick Mahomes’ Chiefs makes it even harder to focus on baseball in January.

Look at it this way: by Sunday, there will be 67 days until opening day. But who’s counting?

Despite all the tough winter distractions, Spring is right around the corner. Why not preview baseball?

The St. Louis Cardinals Fan Caravan rolled through Columbia Saturday evening, providing a perfect opportunity to bring baseball back into the loop. The caravan also gave fans the opportunity to speak to Cardinals’ players, prospects and legends.

Current players Harrison Bader, Chasen Shreve, Dakota Hudson, Mike Mayers and Andrew Knizner were joined by former Cardinals Danny Cox and Joe Magrane spoke about everything from how they’re preparing for next season to how Bader prepares his hair.

With many teams’ pitchers and catchers set to report on Feb. 13, our pastime will be back shortly. It is already time to take a look at how 2019 may go for The National League Central division, possibly the most competitive division in baseball, is expected to have another neck-and-neck season in 2019.

It took until the final day of September and the penultimate game of the 2018 season for the Cardinals’ playoff hopes to fizzle out. Though, it wasn’t an immediate dousing of hope.

Despite being the hottest team in the National League during the month of August, it was the Cards’ division rival Cubs and the NL West’s Los Angeles Dodgers that raked in the two NL Wild Card spots after hot Septembers.

The Cardinals didn’t necessarily have the rug pulled out from underneath them, though. During September, the Cardinals’ pitching went stale, the bats went away and the defense ended the season with 132 errors.

Key September series’ losses included a 3-1 series loss at Busch Stadium to the eventual World Series runner-up Dodgers, a 3-0 sweep to the Brewers and a dismal 2-0 series defeat to the lowly Cincinnati Reds. Those losses left the Cardinals’ season in the hands of the San Francisco Giants, which isn’t the best organization to leave your playoff hopes up to.

There is hope for 2019, though. All it took was one bad month to upend the Cardinals’ season but from April on, the Cardinals led the Central division with 725 RBI and trailed the Cubs by just two total runs with 759. The birds had a decent OPS of .730 and a .409 slugging percentage.

“I know we have a great clubhouse and a number of guys ready to go to work to get back to the playoffs where we belong,” Bader said. “We showed signs of being a playoff team last year and we think we’ve created a solid foundation for 2019.”

Despite the Cardinals young guns like Bader, who’s set to make his first full-season role in center field, they still return a solid group of veterans at the plate.

A big signing of six-time All-Star and four-time Silver Slugger Paul Goldschmidt brings a career .930 OPS and a 30+ home run hitter over the last two seasons to the Cards’ lineup. Goldschmidt, alongside vets Matt Carpenter, Yadier Molina and Marcell Ozuna, will assist in the Cardinals’ efforts to batten down the Central throne. As long as the bats stay consistent through September.

“There’s a good blend of veteran leadership and younger talent that’s ready to learn and the learning curve has been pretty quick for us young guys,” Bader said. “Our job is to get back into the playoffs. Yadi is our leader and he’s been vocal and has done a great job with everybody to get us ready.”

The Cardinals’ pitching, highlighted by the mustachioed Miles Mikolas with his 18 wins and 2.83 ERA, had a team 3.85 ERA and an opponent average of .246. After fortifying the bullpen with veteran LHP Andrew Miller, the pitching will once again be a strength for St. Louis. As long as it stays consistent through September.

Only two runs in 22 innings at Wrigley Field in early October defined the season for the Cubs. After a 3-1 loss in Game 163 on Oct. 1 against the Brewers forced the Cubs to lose the Central Division lead, Chicago’s season ended after a 2-1, 13-inning nightmare loss to the Colorado Rockies in the NL Wild Card game on Oct. 3.

Other than those October nights, the Cubs led the Central Division in hits, batting average and on-base percentage. With great team defense highlighted by SS Javier Baez and RF Jason Heyward, the Cubs look to continue their solid fielding trend into next season.

Chicago trailed only the Dodgers in NL pitching with a team 3.65 ERA and an opponent .240 average last season. Jon Lester hurled like only Jon Lester could but Jose Quintana had an underwhelming season on the mound with a 4.03 ERA while giving up a career-worst 25 home runs.

All-Star RHP Yu Darvish had an injury-riddled 2018 that left him starting only eight games and finishing the season with a 4.95 ERA and a 1-3 record. Following elbow surgery in September, Darvish is expected to be ready by the season’s start. If he can remain healthy and effective, the Cubs rotation of Darvish, Lester, Quintana, Cole Hamels and Kyle Hendricks could be the league’s best in 2019.

If the Cubs’ bats don’t go away like they did in early October, their lineup remains a threat to the division and the league. Ben Zobrist, Anthony Rizzo, Kyle Schwarber and Baez will most likely be Chicago’s standouts again.

What they can only hope for is the return of Kris Bryant to being healthy and effective again. If Bryant is healthy, he’ll return to being a threat for the Cubs.

Bryant seemed healthy enough to reignite the Cards-Cubs rivalry even in the off-season. During the Cubs Convention Friday, Bryant referred to St. Louis as “so boring.”

“I haven’t even seen the video yet,” Shreve said, “We talked about it and it definitely grabbed our attention.”

“I couldn’t have said it any better than Yadi,” Bader said.

Make sure you circle May 3 on the calendar. The Cubs will host the Cardinals for the first meeting of the rivalry in 2019.

The FanGraphs projection of a below-.500 2019 season for the Brewers is pretty surprising. After falling one game short of a trip to play the Red Sox in the World Series, the Brewers will remain a threat this season.

Milwaukee was strong across the board last season leading the division in home runs and slugging percentage while only trailing the Cubs in pitching.

Milwaukee’s pitching— headed by Josh Hader, Corey Knebel and an underrated bullpen behind them— finished fourth in the NL with 3.73 ERA and a .233 opponent BA.

Don’t be shocked if FanGraphs’ projection is wrong about Milwaukee.

Beginning the 2018 campaign without Andrew McCutchen for the first time since 2008, the Pirates dwindled at the NL’s tenth spot in batting with just a .254 BA and .725 OPS while Corey Dickerson led the team with just a .300 average.

It’s the same story with Pittsburgh’s pitching. The Pirates finished eighth in the NL with a team 4.00 ERA and .251 opponent BA. After obtaining RHP Chris Archer in a late trade in 2018, the Pirates’ pitching may slightly improve.

Regardless of Archer, they’re a safe bet to finish near .500 again.

The Reds are doing well so far in their offseason and could become a nuisance for the rest of the Central Division.

Cincinnati added two former Dodgers with the power-hitting Yasiel Puig as well as a solid arm of Alex Wood who immediately make the Reds a better team.

Puig will join a lineup that finished eighth in the NL with 1,404 hits on a .254 BA. Fresh off his first All-Star appearance, second baseman Scooter Gennett will most likely bring consistent batting once again.

The Red are involved in consistent rumors to acquire Cleveland ace and two-time Cy Young winner Corey Kluber in a trade. Kluber would certainly improve the Reds’ poor pitching that finished 14th in the NL with team-ERA of 4.63.

The Reds could very well be fun team to watch in 2019 and in the near future.

No shortage of points scored inside the NBA's bubble