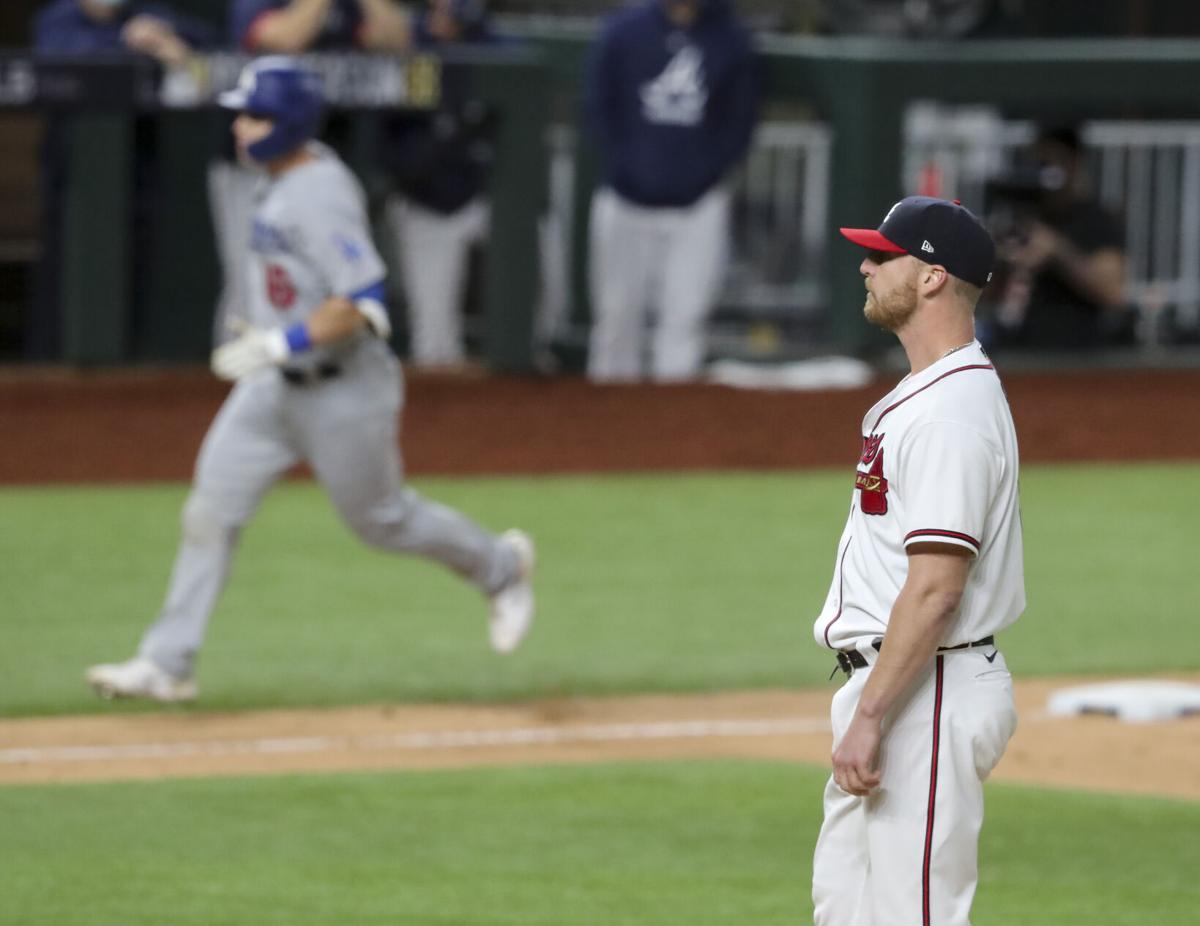 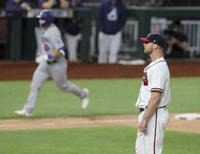 Atlanta Braves relief pitcher Will Smith, right, reacts after giving up a three-run home run to Los Angeles Dodgers catcher Will Smith, back left, in the sixth inning in Game 5 of the National League Championship Series on Friday in Arlington, Texas. 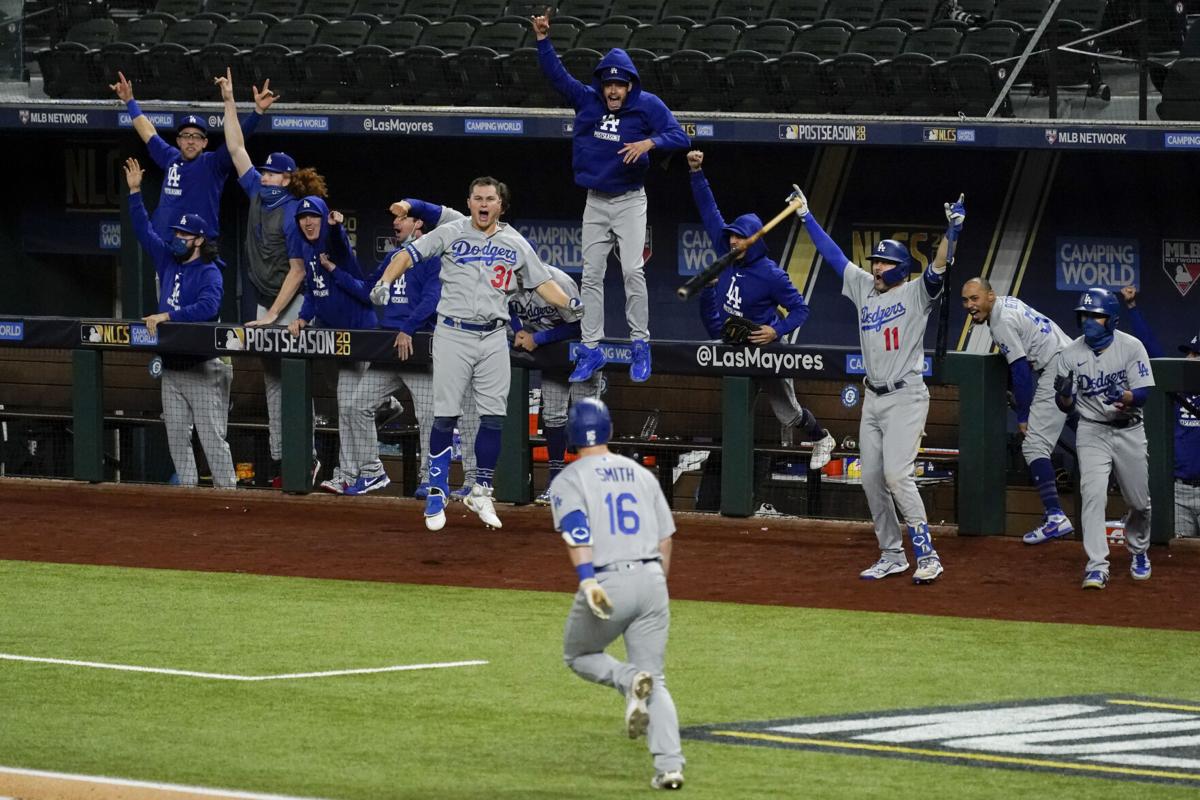 The Los Angeles Dodgers celebrate a three-run home run by Will Smith against the Atlanta Braves during the sixth inning in Game 5 of the National League Championship Series on Friday in Arlington, Texas.

Atlanta Braves relief pitcher Will Smith, right, reacts after giving up a three-run home run to Los Angeles Dodgers catcher Will Smith, back left, in the sixth inning in Game 5 of the National League Championship Series on Friday in Arlington, Texas.

The Los Angeles Dodgers celebrate a three-run home run by Will Smith against the Atlanta Braves during the sixth inning in Game 5 of the National League Championship Series on Friday in Arlington, Texas.

ARLINGTON, Texas — Dodgers catcher Will Smith hit a go-ahead, three-run homer off the Atlanta reliever with the same name, Corey Seager homered twice and Los Angeles avoided elimination with a 7-3 win over the Braves in Game 5 of the NL Championship Series on Friday night.

Smith connected in the sixth against — of all people — Will Smith, the fourth of six Braves pitchers in their bullpen night that started with a couple of postseason firsts by A.J. Minter. Atlanta is looking to get into the World Series for the first time since 1999.

Mookie Betts got that decisive sixth started with an infield single, and the first-year Dodger and former AL MVP had a running, shoestring catch in right field that turned into an inning-ending double play. His catch-and-throw took an Atlanta run off the board after a replay challenge right before Seager's first homer.

Game 6 is Saturday afternoon, with a pitching rematch from the series opener: lefty Max Fried for the Braves and right-hander Walker Buehler for the Dodgers. Both gave up one run in Game 1, which Atlanta won 5-1 after a four-run ninth.

Blake Treinen, the third of seven Dodgers pitchers and the Game 1 loser in relief, pitched two perfect innings for the win. Inconsistent closer Kenley Jansen struck out the side in a non-save situation to end it.

Betts had a stolen base after his sixth-starting single before Justin Turner's one-out hard grounder that got Betts caught in a rundown. The Braves then brought in their lefty named Will Smith to face left-handed batter Max Muncy, who drew a walk before the Dodgers' catcher named Will Smith hit a full-count pitch 404 feet to left-center for a 4-2 lead.

It was the first time since at least 1961 that a batter homered off a pitcher with the same name in the regular season or postseason, according to the Elias Sports Bureau.

The Dodgers extended their lead in the seventh when Chris Taylor hit a two-out double, and scored on a single by Betts before Seager hit a ball into LA's bullpen in right-center.

Seager's four homers and 10 RBI have already tied NLCS records, with at least one more game for the Dodgers to play — two if they want a chance to get to the World Series for the third time in four years.

Taylor later appeared to turn an ankle in left field during the eighth inning but remained in the game.

Minter struck out seven of the 10 batters he faced as the first pitcher in MLB history whose first start came in a postseason game. The fourth-year big leaguer became the first pitcher — starter or reliever — with seven strikeouts in three innings or fewer in a postseason game. He had already matched his career high before striking out the side — all on called third strikes — in the third before leaving with a 2-0 lead.

After Marcell Ozuna and Travis d'Arnaud had consecutive singles to start the third for Atlanta, there was one out when Dansby Swanson hit a sinking liner to right. Betts made a running catch, with his glove skimming the ground before his throw home was late. But the Dodgers challenged that Ozuna that left third base early — and it became the Braves third out instead of their third run.

Umpires and the off-site replay crew needed nearly two minutes to make their ruling, but Dodgers fielders — and even Braves runners — had already left the field after watching the play on the big video board.

Right after that, Seager's leadoff homer to straightaway center in the fourth cut the Dodgers deficit to 2-1.

Rookie center fielder Cristian Pache made a leaping try at the wall, but the ball went just behind his extended glove. But Pache did time things up in the eighth, robbing Muncy of a homer with a nearly identical play.

The Braves scored in both innings off LA starter Dustin May. Freddie Freeman doubled, went to third and scored on d'Arnaud's sacrifice fly in the first, and Pache had an RBI single in the second. D'Arnaud added an RBI groundout in the eighth.

The 21-year-old Pache, who has played in only two regular season games in the big leagues, has an RBI in each of his four NLCS starts. He became a starter after outfielder Adam Duvall's left oblique injury in the series opener.

Minter hadn’t started a game since his junior season at Texas A&M in 2015, the same year Atlanta drafted him in the second round. He had made 144 relief appearances (139 regular season, five playoff games) the past four seasons for the Braves, along with 77 minor league games, before his first professional start.