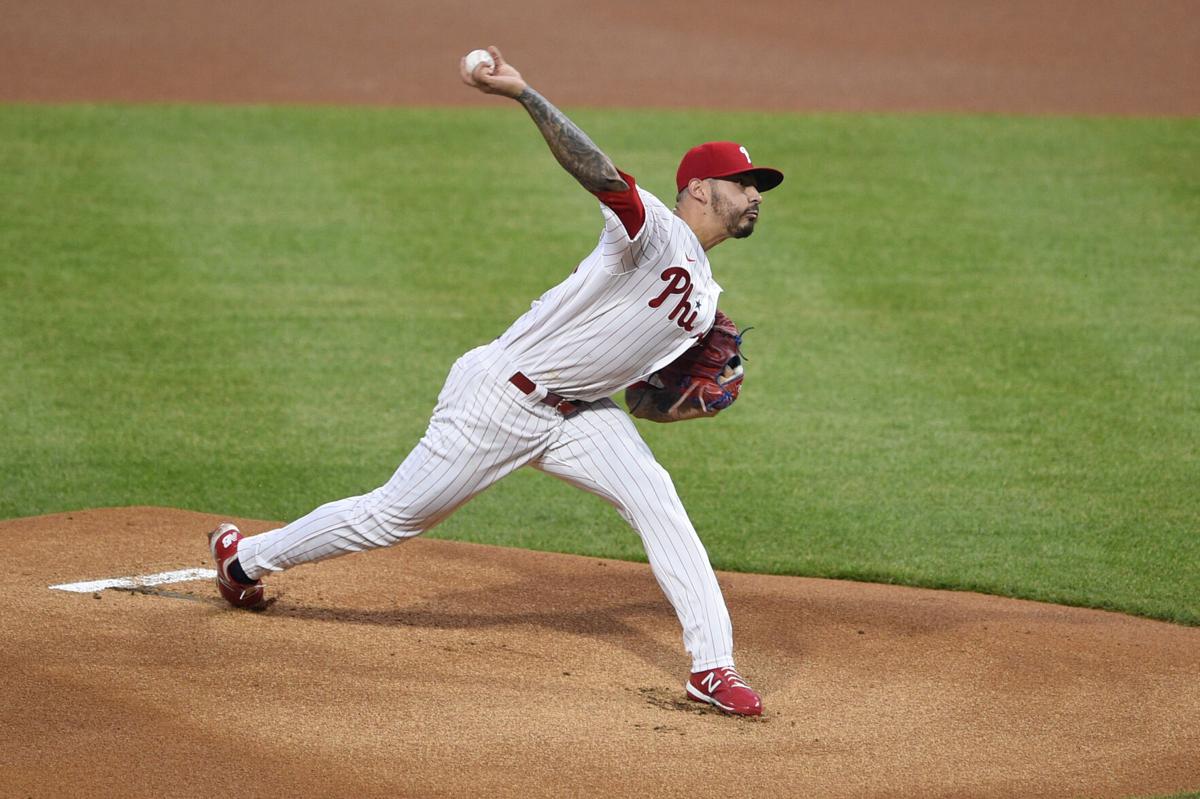 Philadelphia Phillies starting pitcher Vince Velasquez throws the ball during a game against the Milwaukee Brewers on Monday in Philadelphia. 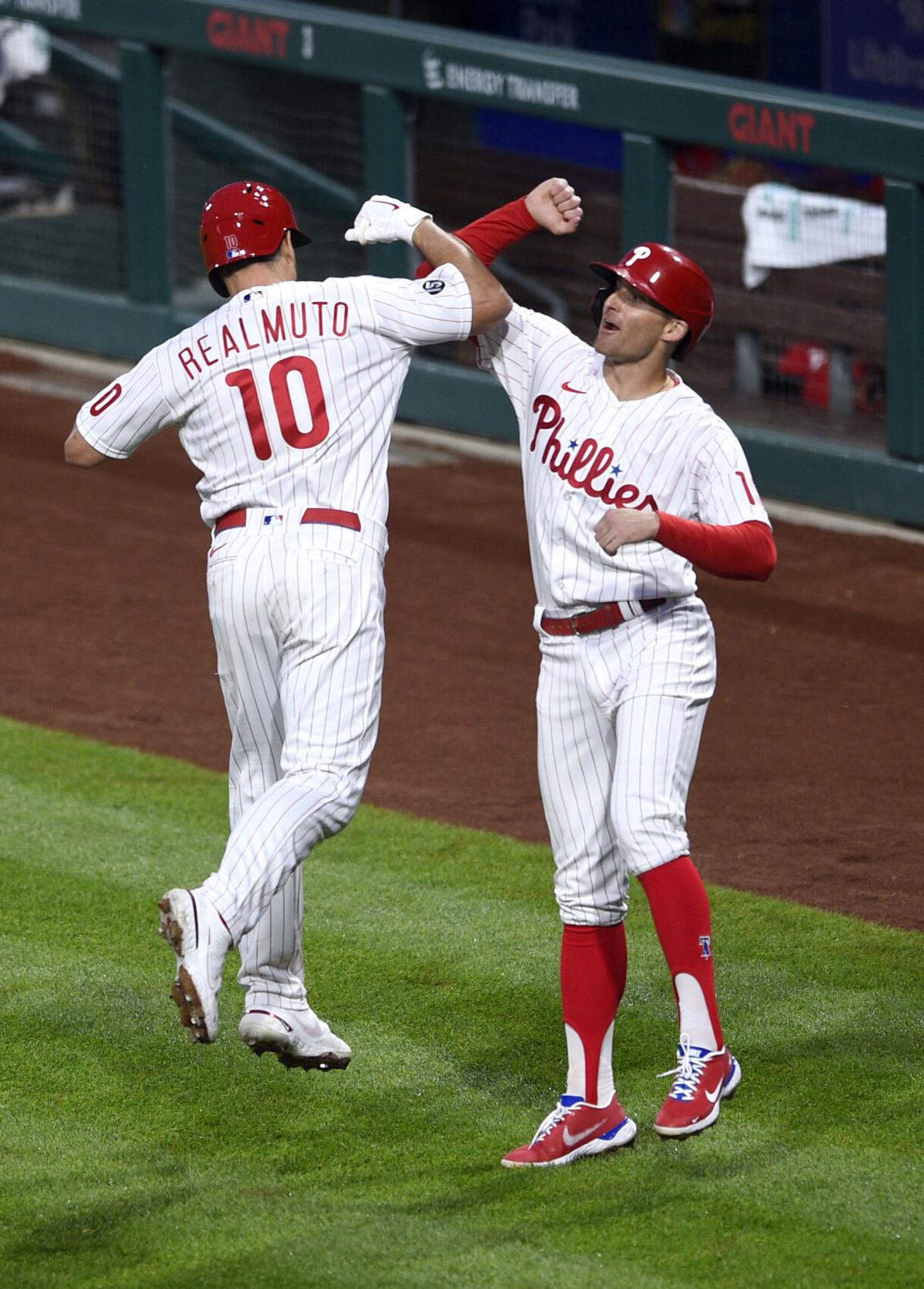 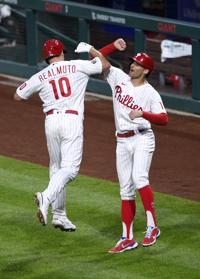 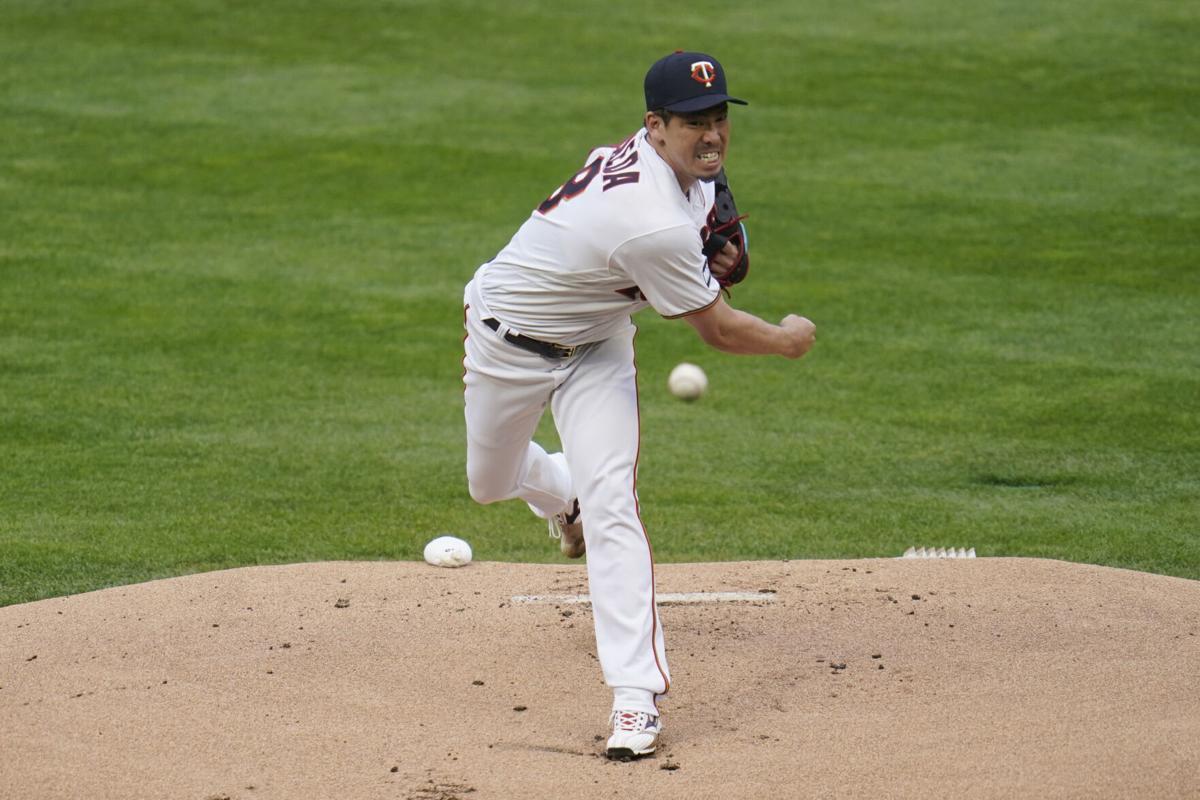 Minnesota Twins starting pitcher Kenta Maeda of Japan throws against the Texas Rangers in the first inning of a game Monday in Minneapolis.

Philadelphia Phillies starting pitcher Vince Velasquez throws the ball during a game against the Milwaukee Brewers on Monday in Philadelphia.

Minnesota Twins starting pitcher Kenta Maeda of Japan throws against the Texas Rangers in the first inning of a game Monday in Minneapolis.

Velasquez (1-0) allowed one run and four hits, striking out six in his longest outing this season. Hector Neris struck out Lorenzo Cain with the bases loaded in the ninth to preserve the win.

Cain blasted a solo homer onto the concourse behind the left-center field stands to give the Brewers a 1-0 lead in the first in his first at-bat off the injury list. But NL Central-leading Milwaukee couldn’t do anything else until Philadelphia went to the bullpen.

Sam Coonrod struck out the side in the seventh, but the Brewers loaded the bases the next two innings. Connor Brogdon walked two and yielded an infield single to Christian Yelich in the eighth.

Neris then picked Garcia off first to end the inning and needed 40 pitches to earn his sixth save in seven chances.

Daniel Vogelbach lined a double to start the ninth and Pablo Reyes ran for him. Neris struck out Luis Urias and Luke Maile swinging. Pinch-hitter Billy McKinney walked and Kolten Wong reached on an infield single to load the bases. Cain went down on a checked-swing to end the game.

Realmuto crushed his third homer into the second deck in left to give the Phillies a 2-1 lead in the first.

Roman Quinn drove an RBI triple the opposite way in the second and scored on Velasquez’s infield grounder to make it 4-1. Both runs were unearned because of a throwing error on shortstop Luis Urias that allowed Odubel Herrera to reach second safely following his grounder.

RF Bryce Harper wasn’t in the lineup because of a sore left wrist. Manager Joe Girardi said he’s hopeful the slugger will avoid the injury list.

Slumping 1B Keston Hiura and OF Tyrone Taylor were sent to the alternate training site to make room for Yelich and Cain. ... RHP Phil Bickford was claimed off waivers by the Los Angeles Dodgers.

Twins 6, Rangers 5: Kenta Maeda steered himself back on track by keeping the Texas Rangers scoreless into the sixth inning, and the Minnesota Twins won the opener of a four-game series in Minneapolis.

Maeda (2-2) had a season-high eight strikeouts in 5⅓ innings, allowing only two singles and two walks in what was by far the best of his six starts this season.

Jorge Polanco had an RBI triple and an RBI double, and rookie Alex Kirilloff kept up his torrid start with two doubles for the Twins. One of them was a two-out, run-scoring line drive to left field in a three-run sixth that came against Kolby Allard, the left-handed reliever brought in to face him.

Adolis García hit a two-run homer in the eighth inning for the Rangers against Brandon Waddell, who was called up from Triple-A before the game, but Tyler Duffey escaped with a 5-3 lead intact after allowing his inherited runner to score.

Joey Gallo hit a two-out, two-run homer in the ninth against Taylor Rogers, who got his second save by striking out García.

Maybe the biggest mystery of Minnesota’s rough first month was the struggle by Maeda, who finished second in AL Cy Young Award voting last year. The Twins weren’t publicly worried, though, just hopeful he’d make some adjustments to his off-speed pitches. The right-hander obliged, lowering his ERA from 6.56 to 5.34 while leading the Twins to their fourth victory in five games.

Dane Dunning (1-2) was better than his past two starts for the Rangers, done in by a bit of bad luck and plain old hustle by the Twins while allowing two earned runs in 5⅔ innings.

Kirilloff used a headfirst slide for his first double in the second inning, went to third on a flyout by Polanco and came around to score on Gallo’s errant throw from right field.

Luis Arraez scored on Josh Donaldson’s two-out double in the third, when he awkwardly collided with airborne catcher Jose Trevino’s legs and leaped up to touch the plate. The players were tangled, but Trevino’s glove hand never grazed Arraez, who was later removed with concussion symptoms.

Tyler Glasnow (4-1) pitched six innings of four-hit ball with three walks for the defending AL champion Rays. The Los Angeles-area native largely dominated the Angels’ lineup until a rocky sixth, striking out eight for his fourth win in five starts.

Shohei Ohtani hit his ninth homer after being scratched from his scheduled pitching start earlier in the day for the Angels, who have lost eight of 12.

Anthony Rendon also homered in the sixth, but the slugging third baseman exited in the eighth after sharply fouling a ball off his left knee. Rendon, who has already missed 12 games this season due to injuries, had to be helped off the field.

José Quintana (0-3) yielded five runs and six hits with nine strikeouts for the Angels while failing to get out of the fourth inning in another poor start.

Anderson (2-3) kept the Padres off-balance for six innings before they broke through in the seventh. Anderson issued a leadoff walk to Manny Machado before Myers singled to right field. Until then, Anderson had allowed only three baserunners, two on walks and one on his error in the fifth inning.

The Padres needed a bullpen game because three starters are out with injuries or illness. San Diego’s sixth pitcher, Mark Melancon, pitched the ninth for his 10th save. Miguel Diaz, Craig Stammen, Austin Adams, Tim Hill (2-2) and Drew Pomeranz also contributed to the four-hitter.

Frankie Montas (3-2) pitched six uneven innings to win the first meeting between the teams in more than two years. Jake Diekman worked the ninth for his third save.

Laureano connected on a 1-0 pitch from starter Steven Matz (4-2) to break a 3-all tie in the fifth.

Shut down by Seattle’s bullpen for seven innings, the Orioles broke loose in the eighth. Mullins got it started with a shot off Anthony Misiewicz (2-1) to right-center field that was nearly stolen at the wall by right fielder Mitch Haniger. The ball appeared to graze the top of Haniger’s glove as he crashed into the fence.

Dean Kremer had arguably the best start of his young career, throwing six innings for Baltimore and allowing just two hits and one run. The only blemish was Tom Murphy’s solo homer in the fifth.

Cole Sulser (1-0) pitched the seventh, but Shawn Armstrong ran into trouble in the eighth. He gave up a two-run homer to Haniger, his eighth of the season. That’s all the Mariners got, though, as Tanner Scott finished the eighth and César Valdez pitched the ninth for his seventh save.

TWINS 6, RANGERS 5: Kenta Maeda steered himself back on track by keeping Texas scoreless into the sixth inning, and Minnesota won the opener of a four-game series.

Maeda (2-2) had a season-high eight strikeouts in 5⅓ innings, allowing only two singles and two walks in what was by far the best of his six starts this season in Minneapolis.

Jorge Polanco had an RBI triple and an RBI double, and rookie Alex Kirilloff kept up his torrid start with two doubles for the Twins. One of them was a two-out, run-scoring line drive to left field in a three-run sixth that came against the left-handed reliever, Kolby Allard, brought in to face him.

Copyright 2021 The Associated Press. All rights reserved. This material may not be published, broadcast, rewritten or redistributed without permission.