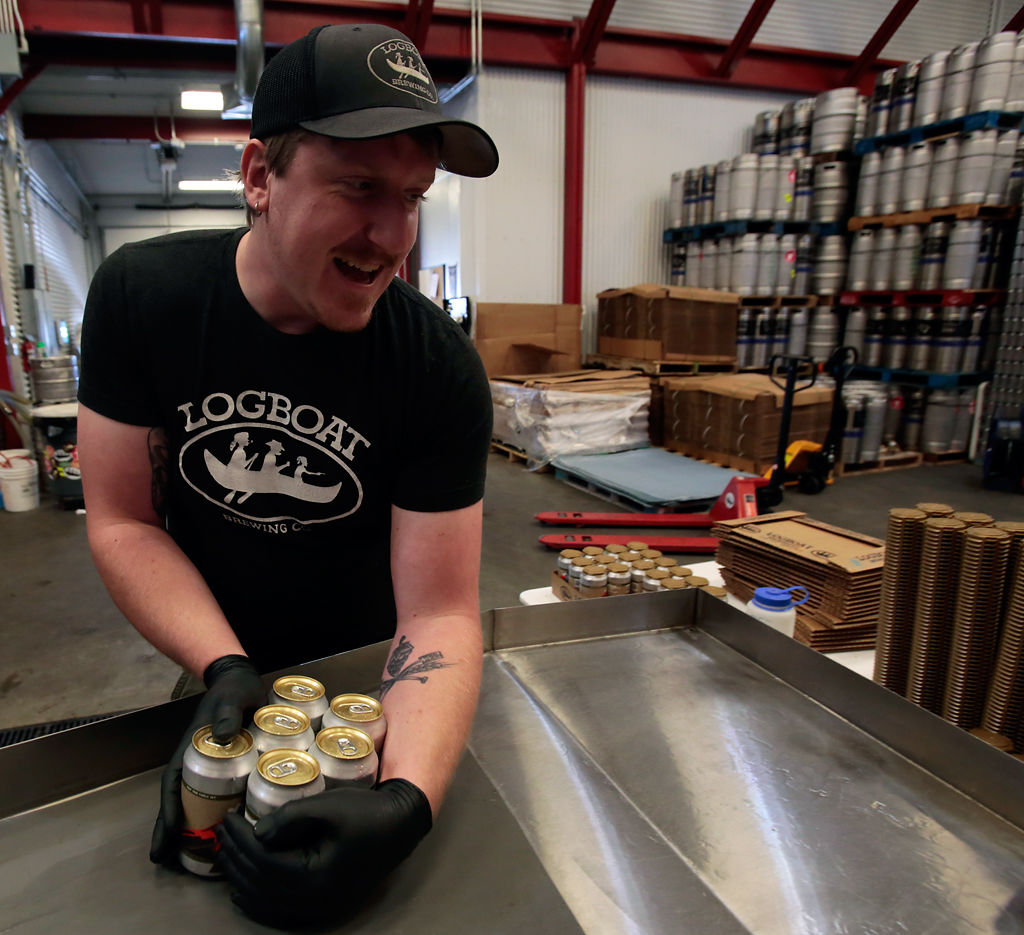 MJ Ivancic pulls beers from the end of the canning process and prepares them to be packaged in 2016 at Logboat Brewing Co. Columbia’s Logboat and Kansas City’s Boulevard are among the options that will be available on game days at Memorial Stadium when the new alcohol policy kicks in Saturday. 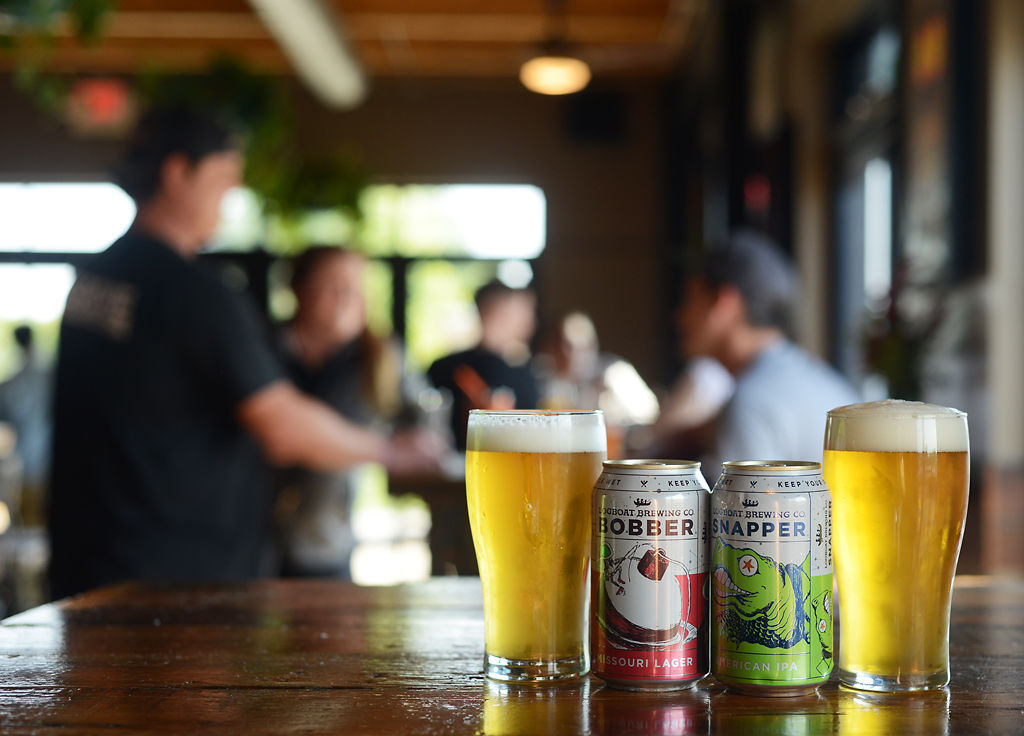 Logboat Brewing Co. will be offering two of their local beers, the Bobber and the Snapper, to game attendees beginning this Saturday at Memorial Stadium, after the SEC voted this offseason to allow alcohol sales inside stadium.

MJ Ivancic pulls beers from the end of the canning process and prepares them to be packaged in 2016 at Logboat Brewing Co. Columbia’s Logboat and Kansas City’s Boulevard are among the options that will be available on game days at Memorial Stadium when the new alcohol policy kicks in Saturday.

Logboat Brewing Co. will be offering two of their local beers, the Bobber and the Snapper, to game attendees beginning this Saturday at Memorial Stadium, after the SEC voted this offseason to allow alcohol sales inside stadium.

Visitors will stream into Columbia, fans will flow into Memorial Stadium and there are likely to be at least a few spills on the field when West Virginia comes to town Saturday.

Yes, a football fan’s cup will runneth over at the Tigers’ 2019 home opener. And deep into the fall, as well.

Beer and wine — sorry, no hard liquor — will be sold at different locations around Memorial Stadium for the first time Saturday. Among these locations will be a beer garden and a brewhouse.

That’s the good news (assuming you get thirsty on football Saturdays).

Here are the caveats: No booze will be served near the student section, and the stadium will turn dry after the third quarter, when sales will halt.

The drinks can flow thanks to a policy change made by the Southeastern Conference this spring which offered programs across the conference the option to sell alcohol in their stadiums, something that had been prohibited by the conference since the early 1970s. Missouri announced last month that it would join more than 50 schools, including West Virginia, Ohio State and LSU, and introduce alcohol sales at games this fall.

The new policy will certainly make more money for the athletic department, but Nick Joos, the Deputy Athletic Director for Communications for Mizzou Athletics, says that isn’t the goal of the new policy.

“The money is secondary to the safe environment and the reduction of binge drinking,” Joos said.

The alcohol will be sold by the school’s concessionaire, Levy Restaurants. Levy will be responsible for training employees to recognize fake IDs, prevent serving minors, recognize signs of intoxication and handling disorderly customers, according to a release from the athletic department. And while Saturday may be a landmark event for some, it will not be the first time alcohol has been sold at MU facilities. Suds and spirits course through at concerts held at Mizzou Arena year-round. Levy handles those sales, too.

The plan was endorsed by MUPD, who said they worked closely with the athletic department in developing it.

“We share a mutual commitment to maintaining a safe environment for fans, student-athletes and staff,” said MUPD Chief Doug Schwandt in a news release. “Mizzou has a positive game-day atmosphere that we believe will continue under the new policy.”

There will be plenty of drink options to choose from, including local favorites. If you’re buying from a concession stand, here are your beer and hard seltzer options: Bud Light, Bon & Viv Spiked Seltzer, Logboat’s Bobber and Snapper, Michelob Ultra, Natural Light’s Naturdays and hard seltzer and Boulevard’s Unfiltered Wheat and Pale Ale. 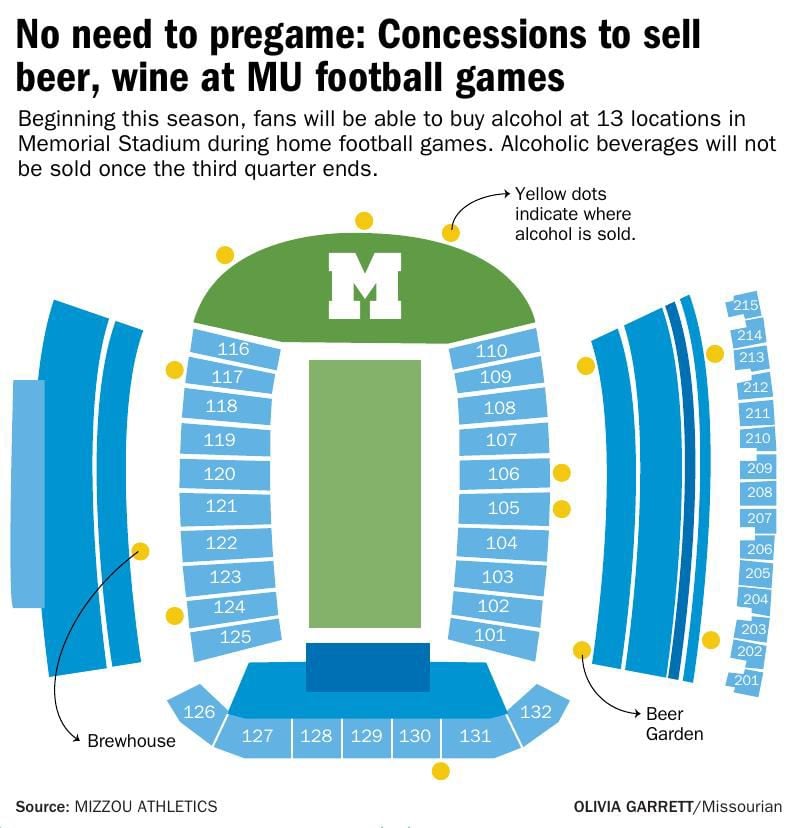 If you’re in a club, your options are the same minus the Natural Light and Boulevard plus Budweiser, Bud Select, Coors Light, Golden Road Mango Cart, Goose Island’s 312, IPA and Next Coast IPA, Logboat’s Lookout and Shiphead, Miller Light, Shock Top and Stella Artois.

The wines for sale will be from Woodbridge, a winery near Lodi, Calif. Cabernet Sauvignon, Chardonnay and Pinot Grigio are the options.

West Virginia is no stranger to selling booze

Predicting how much money alcohol sales will generate for the athletic department is a challenging task as there are a multitude of factors that affect attendance, such as weather and team quality. If fewer people come to football games, naturally less alcohol will be sold.

West Virginia, MU’s opponent Saturday, was among the first schools in the nation to introduce alcohol sales at football games when they began pouring drinks at Milan Puskar Stadium in 2011. With a capacity of 60,000 people, the venue offers a similar capacity to the 62,621 Missouri can seat at Faurot Field.

Michael Fragale, Senior Associate Athletics Director at West Virginia, estimates that the school, on average, nets around $600,000 in alcohol sales over the course of a football season. With a similar stadium size, MU’s earnings could be close to that.

Fragale says that schools have been calling their department for years for information about their alcohol policy .

“If (schools) say they’re not doing it for revenue, that’s not totally true,” Fragale said.

But Fragale says their policy has been successful in cutting down on binge drinking, too. West Virginia charges $8 per beer and limits each customer to two beers at each purchase. Fragale also said that alcohol-related incidents have gone down since the policy was implemented.

What do fans think?

Charlie Sticklen attends nearly every Missouri home football game and now has season tickets in the new South End Zone. He is a fan of the new policy.

“I’m all for it,” Sticklen said “I think it’s a revenue maker. I think it’s going to be properly regulated.”

Sticklen graduated from the MU law school and three of his four children are currently students at the university, as well. He doesn’t drink, but he knows that others do and believes that the policy will improve attendance and safety.

“I think it will get more people from under their pop-up tent, and into the stadium,” Sticklen said. “It’s also going to prevent the binge drinking.”

Brian Garner can make the case that he is Missouri football’s number one fan. He goes to every home game and multiple road games every year. He also likes the new policy.

“People say ‘aw you’ll get all these drunk kids,’” Garner said. “No. This will be no worse than a Cardinal game, a Royals game or anything else. We don’t have Gomer Pyle (from “The Andy Griffith Show”) patrolling the stadium.”

Garner is not much of a drinker. But, every now and then he will have one to celebrate an occasion.

“I may have a beer with (my buddies) right before the game starts to christen the new end zone and the policy,” Garner said.

“We do survey our fans electronically after games, to see how we do, how can we improve,” Joos said. “That data and that input was certainly a factor in making this decision.

Attendance has declined over recent years at football games. The new policy could potentially attract fans who like to enjoy a beer at games.

“Maybe that gets you a few more fans,” Garner said. “(A hypothetical fan who would normally go to a Chiefs game and buy beer) can come to a Mizzou game, get four or five beers at the Mizzou game. Now you got his ticket money.”

Will the new policy change how people tailgate? Given that drinking, often in excess, is a common tailgating activity, people could feel less inclined to tailgate if they can just buy beer inside.

Garner is something of a tailgating expert. He tailgates at every home game near Hearnes Center and organizes tailgates on the road as well, making the trip to Wyoming last week. He doesn’t believe the policy will be detrimental to the tailgating experience. In fact, he thinks it might make it even better.

“People may not try to swill seven or eight beers at the last second before they go in,” Garner said.

“I think it’s going to enhance the tailgating experience because there won’t be that pressure to binge drink or over-indulge,” Bredehoeft said.

Joos hopes the new policy won’t change too much about how people experience game day.

“I think Mizzou’s had a vibrant tailgating scene and tradition for many years, and I don’t see that declining,” Joos said.

It will take a while to see the full effects the new alcohol policy will have on the school. One thing is clear, though: if the football team makes you want to drink, you don’t have to leave the game to do so.

Mizzou Arena will have alcohol sales, Lion's Choice this season

Like with football games at Memorial Stadium after the SEC lifted its ban on alcohol sales, Missouri will sell wine and beer during men's and women's basketball games this season at Mizzou Arena.

Missouri will face the Mountaineers at 11 a.m. Saturday in Columbia.