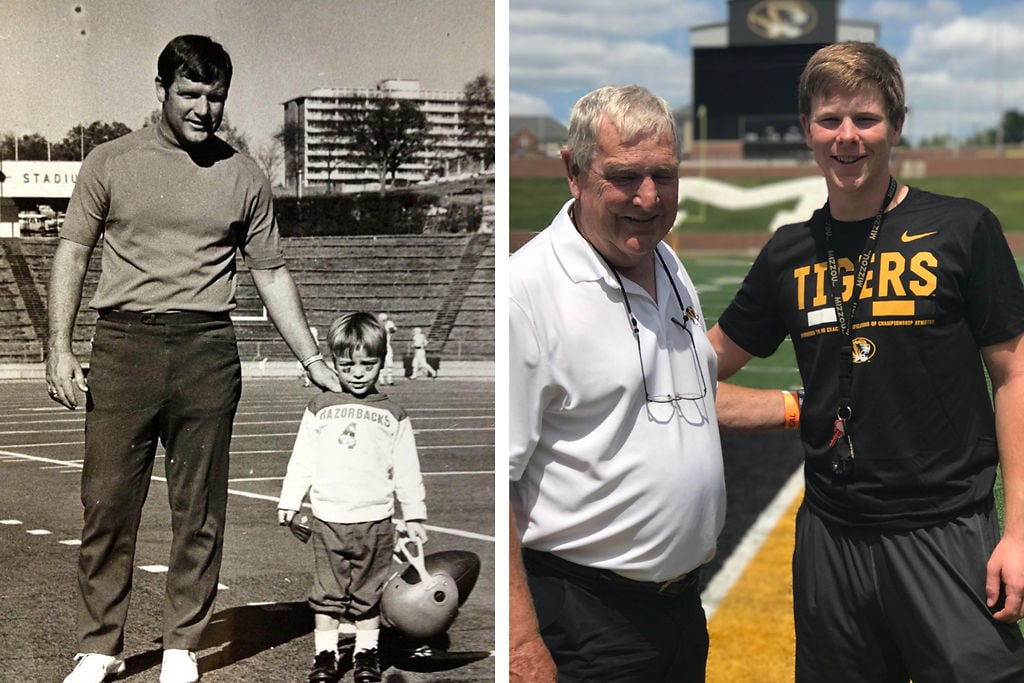 Harold Horton, a college football coach for almost three decades, stands with his son, Tim, in the left image and with his grandson, Barrett Bannister, on the right. The photos were taken 50 years apart. Tim is now the running backs coach at Vanderbilt and Banister is a Missouri receiver. 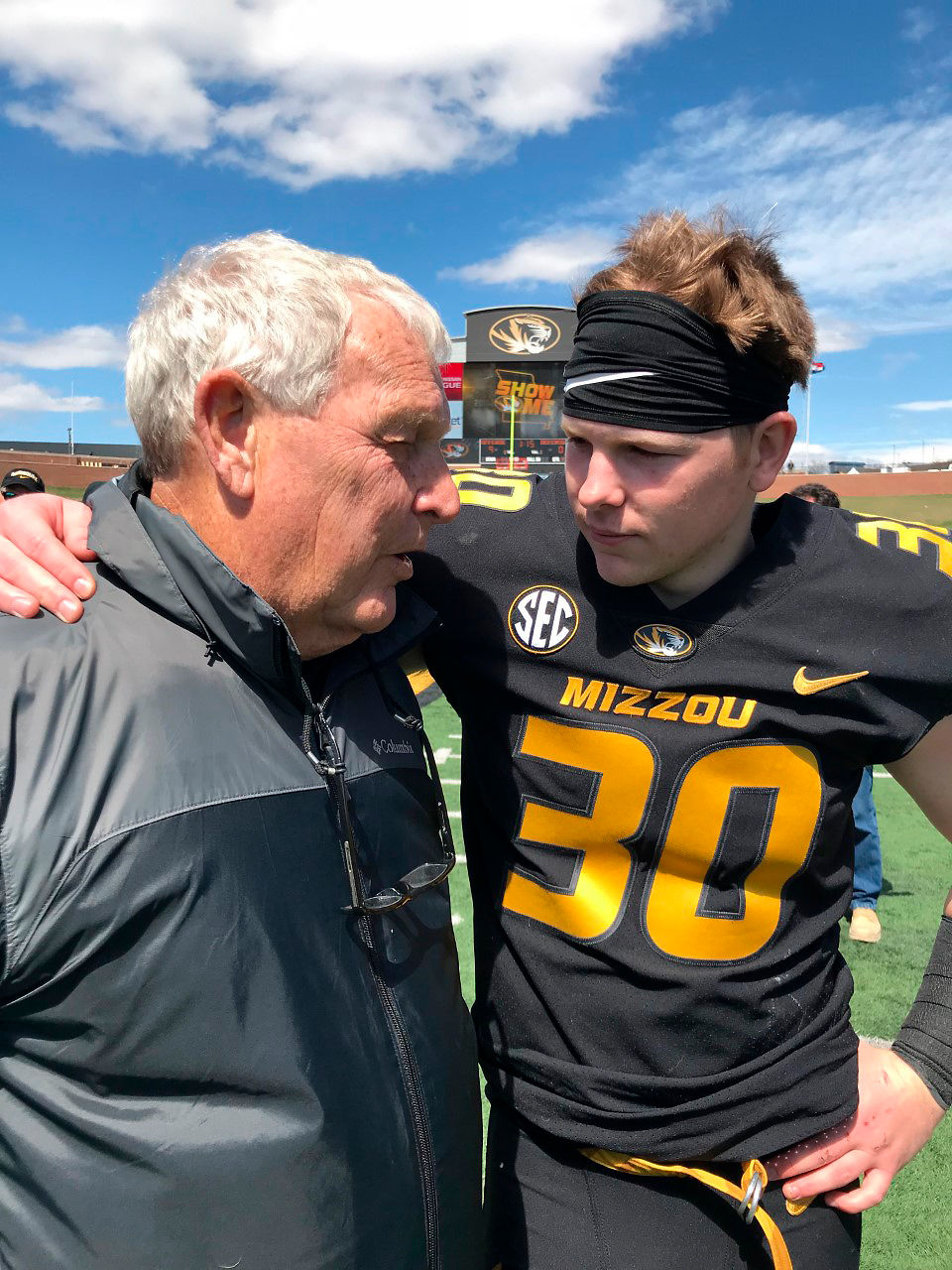 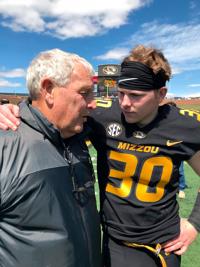 Harold Horton, left, stands with grandson Barrett Banister on Faurot Field. Horton has been a college football coach for almost three decades, and Banister is a Missouri receiver.

Horton and the Commodores have to face him in Nashville on Saturday.

Horton was coaching running backs at Auburn in the SEC West and didn’t foresee this issue when he nudged Banister to Missouri back then. The matchup between the Tigers from Alabama and Missouri, a one-time thing during Banister’s tenure, came during Banister’s redshirt year, after all.

But after six years with Auburn, Horton joined Derek Mason’s staff at Vanderbilt this season, where he has been thrust into the SEC East — Banister and the Tigers’ division — setting up an annual matchup against Missouri’s redshirt sophomore.

Horton didn’t have that in mind when he floated the idea of playing at Missouri to Banister. He knew how badly Banister wanted to find a home at which he could succeed in the Southeastern Conference. Banister knew that, too, growing up in Fayetteville and spending much of his childhood on SEC sidelines and around SEC players.

But Banister mainly held Division II offers, not the FBS or, more specifically, SEC offers he coveted. He did have preferred walk-on SEC offers, though. And Horton, who had familiarity with some of the coaches, suggested he take the offer from the Tigers.

“I thought (Missouri) would be a good fit for him,” Horton said. “It was a good football program. It was fairly close to home, and I knew he would be around great men.”

If that bit advice sounds familial, it was. Banister is Horton’s nephew.

And now uncle and nephew will share the field on Saturday, the former on the Vanderbilt sideline and the latter on the field.

It’s a family reunion most don’t get to experience. But then again, most families aren’t ingrained in the fabric of college football like this one is.

Horton played for Arkansas before embarking on a college coaching career that has spanned almost three decades. Harold Horton, his father and Banister’s grandfather, also played for the Razorbacks before beginning his own coaching career that spanned almost three decades, only a few years longer than his second career in college athletics administration.

The father and son, along with other members of the family, have been built-in mentors and coaches, helping build Banister and making Saturday’s unique matchup possible.

“Growing up around the game and learning to love it at a young age,” Banister said, “has really helped me be where I am today.”

Harold Horton can’t recall a time he hasn’t loved football. It’s been a part of his life as long as he can remember.

He loved it even when he carried the ball for the first time as a seventh grader in the early 1950s. That’s when, after running through the hole into the clear, he lost his pants.

Fortunately for all involved, there was another layer underneath to keep a comical moment from turning into complete embarrassment.

“That was before they inserted the hip pads into the pants,” he said.

The pants managed to stay on when he played for Arkansas under Frank Broyles. After graduating in 1962, Harold wasn’t ready to give up football, so he turned in his helmet for a coach’s whistle. He initially coached high school football then and soon returned to his alma mater to work under Broyles and coach the linebackers. He switched to coaching defensive line for four years when Lou Holtz became head coach in 1977, until Horton was fired. Then he spent the next eight years, the rest of his time as a head coach, leading the University of Central Arkansas. He won two NAIA national championships there.

Through it all, his wife, Betty Horton, and his two kids, Tim and Holly, were there.

“We lived and breathed it,” said Holly, Barrett’s mom. “We typically knew Christmas was never going to be at home because you would go to a bowl game.”

Football filled the dinner table discussions. On road trips in the car, they often played a game in which Harold named a city and the kids tried to answer with the name of the mascot.

Holly also learned quickly that her dad would never be home for her July 31 birthday. That was always the day of the Arkansas All-Star game. He often left for work in the morning before the kids woke up and returned around 10:30 p.m.

Holly figured that if she wanted to spend time with her dad, it would have to be through football.

When Harold was coaching at UCA, Holly would come to practice and watch from the hill where she sat.

“He would ask me after practice, he would come over and sit and say, ‘Well, what did you think?’ And I would tell him what I thought,” Holly said.

Growing up, Holly also spent time learning about her dad’s players, from where they came, and what they could do well.

She also had a chance to meet many of them, as well as the coaches, as did Tim. Many times throughout Holly’s and Tim’s childhood, coaches and players visited their home. Sometimes, they weren’t just any players and coaches. Harold coached with five different men who went on to coach in Super Bowls: Jimmy Johnson, Pete Carroll, Joe Gibbs, Barry Switzer and Raymond Berry.

“Oh, I loved it,” Holly said about her childhood exposure to the game. “I loved it. I love the use of tight ends in football because they are so versatile. Especially if they have good hands.”

Harold didn’t know it then, but he was creating two resources who would help his grandson decades later.

Holly and Brian Banister didn’t have to do anything to inspire a love of sports in their son. He was the kid, after all, who put together an entire basketball event several days a week in their living room.

With music playing in the background, Banister first typically completed a shoot-around as his warm up. Next, he switched the music to the National Anthem, for which he stood still and listened to the entire song. The game that ensued only stopped for halftime, which meant a trip to the bathroom, where he gave a speech to his imaginary team.

Is it any wonder Barrett was a prime pupil to whom a family could pass its football knowledge and resources?

Tim only lived close by from 2007-12 when he was coaching the Arkansas running backs. Otherwise, he and Barrett bonded and learned together in short, but quality, bits of time whenever they were in the same place.

Often {span style=”background-color: #deffde;”},{/span}when they see each other, they play catch or run routes. None of these moments stand out to Holly more than the time the two ran routes on a beach in Destin, Florida. During the vacation, Tim and Barrett grabbed a football and went to the sand where Tim threw all kinds of passes to test Barrett’s hands — over the shoulder, to the side, or balls that forced Barrett to dive.“Barrett was always a really great athlete,” Tim said. “He always had great ball skills, whatever the sport may be.”

Holly, or Coach Holly as Barrett sometimes calls her, expects more than just good hands, though. She attends all of his games and often gives her thoughts postgame.“He will say, ‘Coach Holly, how did you think of how I did?’ she said. “I will give him my opinion. ‘You’ve got to get some (yards after the catch).’”

Postgame discussions happen with Harold, too. When they were both in Arkansas, Harold and Barrett often talked in person after games about the good as well as the bad.

Barrett has always called his grandfather “coach” for a reason.

They still talk after games, even when Harold can’t make it in person. When he can’t attend, Harold watches on TV, and he never misses a snap. Postgame, Barrett usually gives coach a call to get his feedback.

But the most important conversations have not been those postgame phone calls.

In more macro conversations, Harold has emphasized to Barrett the need for sticking to the process. The phrase Harold uses is “chopping wood,” stressing the importance of not looking at others and feeling sorry for yourself. Instead, continue doing what you are supposed to do and things will fall into place.“I think that’s the thing that has really gotten me through, especially this most recent stage of climbing up a depth chart,” Barrett said. “And just knowing what lies in front of me and how to approach it.”

Harold’s guidance helped Barrett go from a redshirt player on Missouri’s scout team in 2017, to a contributor in 2018, to a scholarship player in 2019 who caught his first collegiate touchdown against West Virginia on Sept. 7 this season.That approach will be on display on the field when he faces his uncle’s Vanderbilt team this weekend.

Harold already has his DVR set to record the game. He will watch each snap at some point Saturday from his living room in Fayetteville. He and Betty won’t be making the trip to Nashville.

But one of the two teams will; somebody has to. Holly is still trying to wrap her mind around that fact. She usually gets to root for her brother and her son.“I always want my brother to win because I know that wins and losses mean jobs and no jobs,” she said. “I’ve lived that. But yet, I am a Missouri Tiger and I am for my son. Not a doubt in my mind, but it will be hard.”

Tim made it clear he’s a Barrett Banister and Missouri fan. Just not this weekend.

Barrett feels similar. He is close to his uncle, but his allegiance is with his team.

The two are treating these days like a game week. They haven’t talked.

“I will probably say a few words to him before the game,” Barrett said, “And after the game, I will hug him like he’s family.”