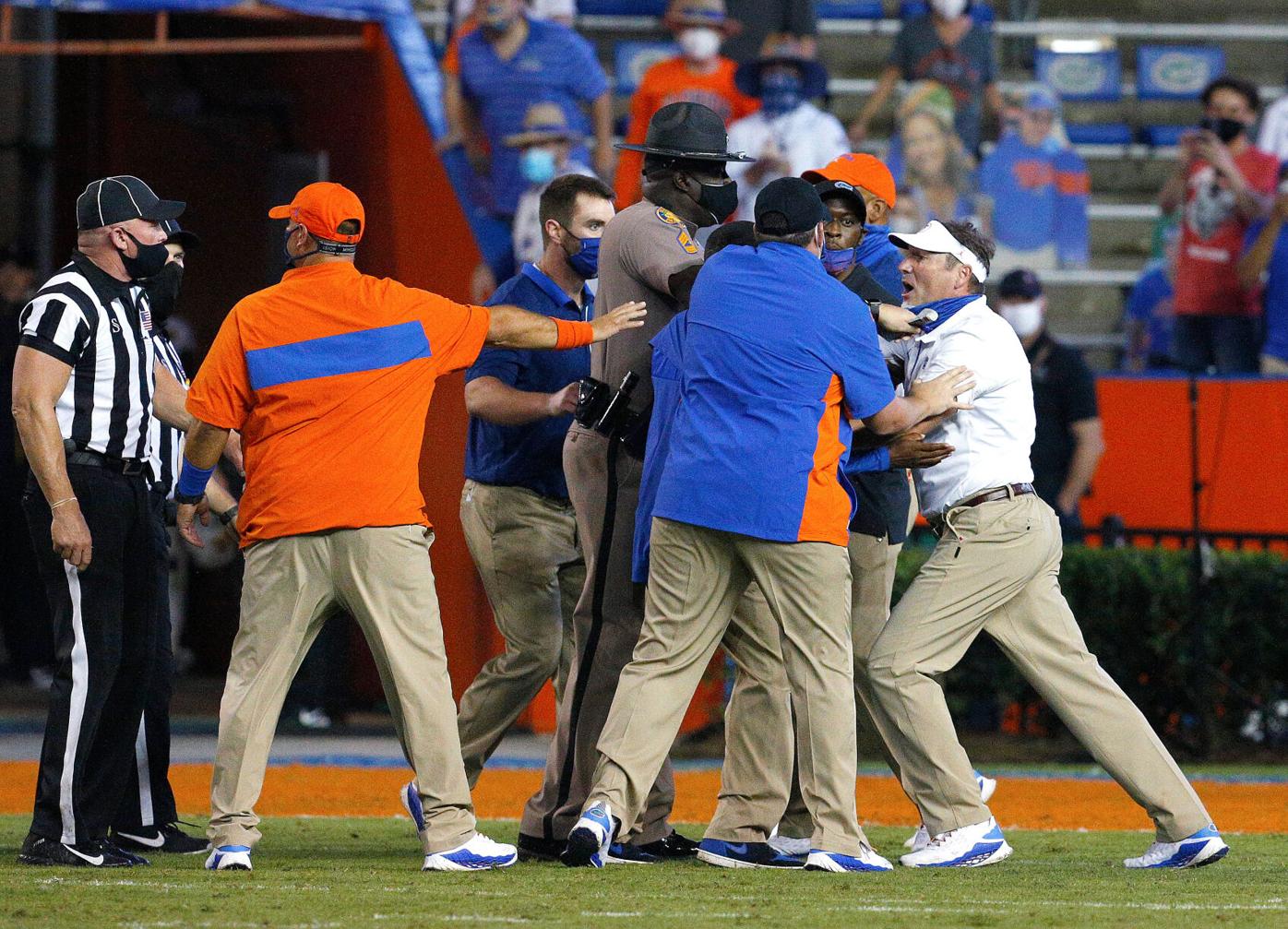 Florida coach Dan Mullen, right, is held back by coaches and law enforcement Oct. 31, 2020, in Gainesville, Fla. Every player present for the Florida-Missouri game was issued an unsportsmanlike conduct penalty, and three players were immediately ejected after the fight. 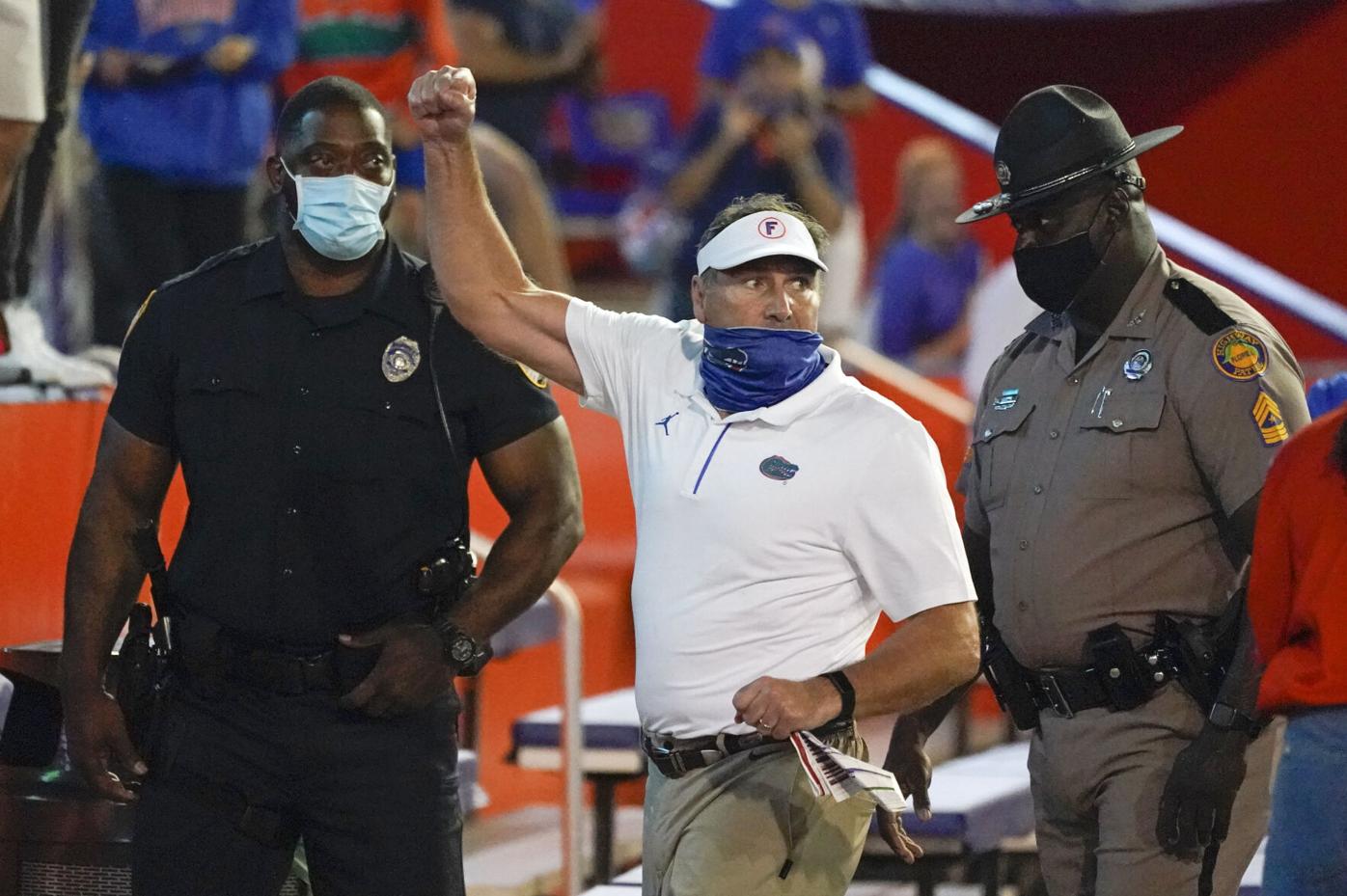 Florida head coach Dan Mullen, center, raises his fist Saturday, Oct. 31, 2020, in Gainesville, Fla. A fight broke out between Missouri and Florida at the end of the second quarter. 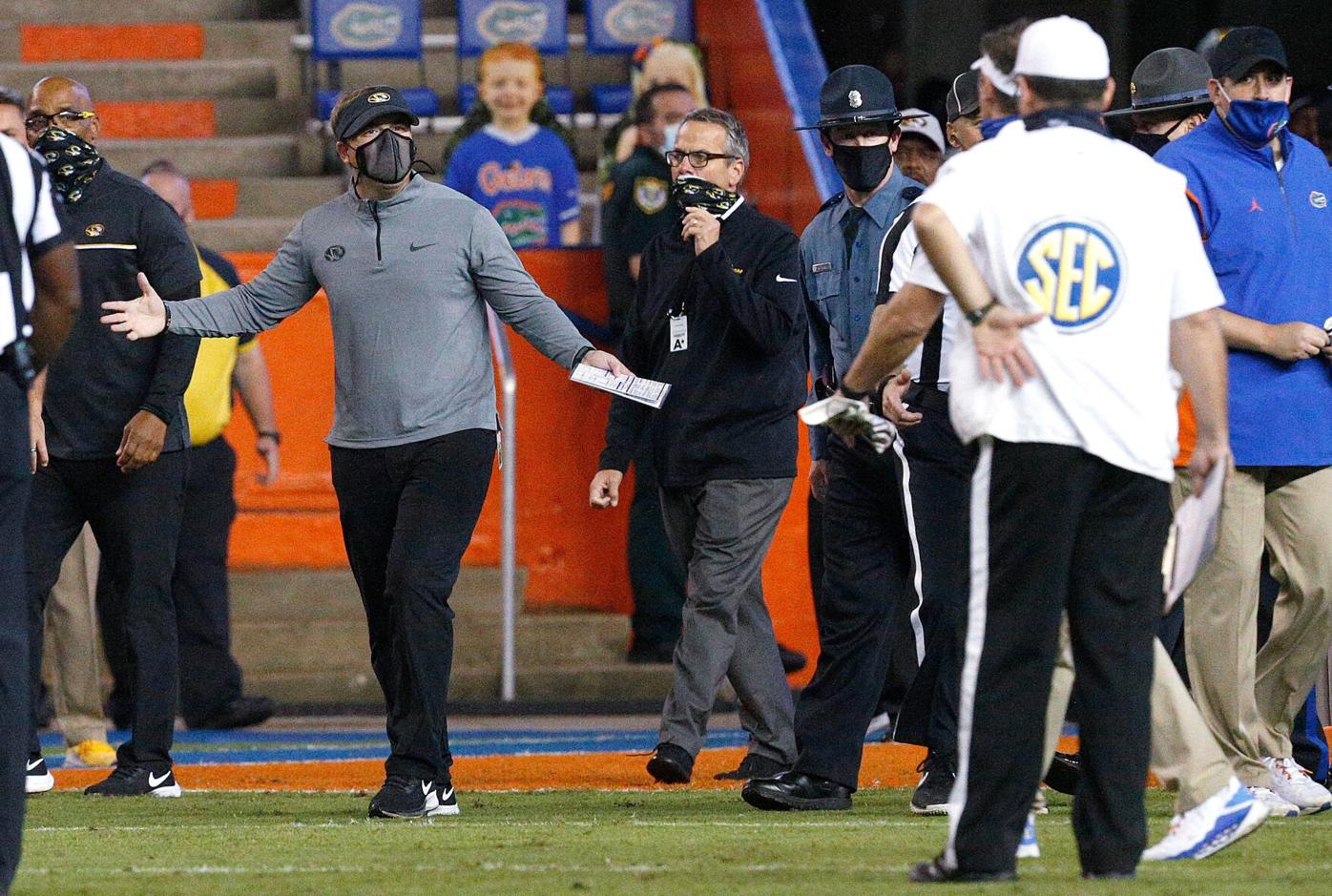 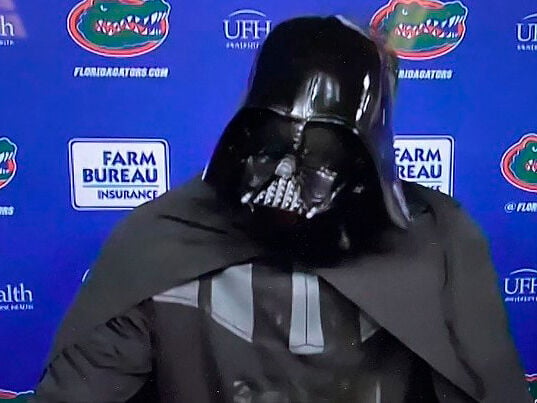 Florida coach Dan Mullen dresses up as Darth Vader on Saturday, Oct. 31, 2020. This was during the press conference after the game against Missouri, in which Florida beat the Tigers 41-17

Florida coach Dan Mullen, right, is held back by coaches and law enforcement Oct. 31, 2020, in Gainesville, Fla. Every player present for the Florida-Missouri game was issued an unsportsmanlike conduct penalty, and three players were immediately ejected after the fight.

Florida head coach Dan Mullen, center, raises his fist Saturday, Oct. 31, 2020, in Gainesville, Fla. A fight broke out between Missouri and Florida at the end of the second quarter.

Florida coach Dan Mullen dresses up as Darth Vader on Saturday, Oct. 31, 2020. This was during the press conference after the game against Missouri, in which Florida beat the Tigers 41-17

It started with a late hit. Then the brawl erupted.

Missouri’s 41-17 loss to Florida in 2020 should have been pay-per-view for the number of punches thrown in a halftime fight that cleared both benches. Every player present for the game was issued an unsportsmanlike conduct penalty. Three players were immediately ejected: UF’s Zachary Carter and Antwuan Powell and MU’s Tre Williams.

But the fight was only one part of the bizarreness surrounding the game. It served as a creation story to memes and moments that will be forever entrenched in college football history. And, ultimately, it might be looked upon as the beginning to a long end for Florida coach Dan Mullen, who’s had the seat warmers turned on for him in a tumultuous 2021 season.

“I do think, looking back, it’s one of those bricks in the wall that has put him in the situation where he is where if you’re winning and things are great, then you can look at that as this guy having fun,” Matt Baker, a college football reporter for the Tampa Bay Times, said. “But when you’re losing and things are going poorly, you can look at that as somebody who, ‘What the heck is this guy doing?’”

A year on, the Missourian spoke with two reporters who covered Florida on Oct. 31, 2020, to recap what happened as MU coach Eliah Drinkwitz and the Tigers prepare to host the Gators on Saturday at Memorial Stadium.

Public perception of both Florida and Mullen was high entering the 2020 season. The third-year coach had led Florida to 10-3 and 11-2 finishes in his first two seasons and a No. 6 AP Top 25 ranking at the end of the 2019 season. Mullen coached the team to two consecutive New Year’s Six bowl games, both of which the Gators won.

The goal in 2020 was a Southeastern Conference championship and a College Football Playoff spot. Maybe the Gators even had a shot at the national title.

Florida was 2-1 after big wins over Ole Miss and South Carolina in the first two weeks of the conference-only season. Quarterback Kyle Trask was playing some of his best football in what was his final season, completing 74 of 103 pass attempts for 996 yards and 12 touchdowns in the opening three games.

“The offense was one of the best that we had seen in some time,” Chris Ortega, the sports editor and Gators beat writer for Florida’s student paper, The Alligator, said.

The Gators’ game before Missouri was Oct. 10, when it lost 41-38 to Texas A&M in College Station. It was Mullen’s first loss against Aggies coach Jimbo Fisher and Florida’s first loss of the season.

In his press conference after the loss, Mullen opened not by focusing on how his team played but by calling attention to the number of fans at Kyle Field. There were 24,709 people at the game, the most the Gators played in front of all season as college football teams and the U.S. grappled with the COVID-19 pandemic.

Mullen called for Florida leadership to allow fans to “pack The Swamp” for the following week’s home game against LSU. The phrase, in some ways, was Biblical: vague, a bit divisive and oft-repeated.

Coincidentally, Florida’s game against LSU was postponed because of a COVID-19 outbreak. The Gators had a cluster of at least 19 players with positive tests following the Texas A&M game, causing the LSU game to be pushed until later in the season and then the matchup against Missouri to be moved back a week. Multiple players were still out for Florida with the virus when MU visited The Swamp.

“So it kind of disrupted the flow,” Ortega said. “I think, heading into the game against Missouri, it was as if the status quo was back to normal. But that week off was a little bit odd for the team.”

There wasn’t anything special about the Missouri-Florida game in its first half. Baker even went so far as to call it “vanilla.” The Gators went up early, leading 6-0 at the end of the first quarter, before MU defensive back Jarvis Ware put the Tigers on the board with a pick-six near the top of the second.

But the pace picked up with around two minutes to go in the half. Trask led a six-play, 74-yard scoring drive to put the Gators back on top, and then Missouri went three-and-out to give the ball back to Florida with 35 seconds until halftime.

Florida’s final drive seemed unfruitful until Missouri was called for offside as the Gators punted away the ball. The penalty gave UF 5 yards, a first down and two seconds on the clock.

MU gave up another down on the next play for the same reason. Of the many “What ifs?” that can be asked about this game, one thing is nearly certain: If Tre Williams hadn’t have jumped offside, no brawl would have occurred.

Instead, the referees allowed Florida to redo the down with an expired clock. Trask, under pressure just shy of the 50-yard line, stepped up and heaved a Hail Mary attempt to Kyle Pitts.

Trajan Jeffcoat barreled down the center of the field from a little over 5 yards ahead of Trask and straight into his chest.

The SEC Network-Alternate broadcast panned away toward the end zone, and when it came back, Trask was on his feet. But it also showed a few of his teammates getting chippy as refs tried to push them away.

It looked as if things were clearing up. Then Mullen was on the field and the benches cleared.

“I just saw Mullen being ballistic,” Baker said. “I had zero idea what happened. Just because, again, my attention is looking downfield, not at Trask,” Baker said. “And then I just see a mass of humanity running out there.”

Punches were being thrown. Players were being shoved. Coaches found their way into the fight. Later, SEC officials would take hours going over the film to see who was involved enough to warrant a suspension.

It took over a minute and a half to stop the brawl and clear both teams entirely from the field.

“Then it all sinks in like, ‘Oh shit. So many key players are gonna be coming out,’” Ortega said.

Mullen and Drinkwitz went to speak with head ref David Smith. At first, tempers flared, but then there was a handshake, and, after a moment, the two coaches returned to the locker room.

Only Mullen didn’t quite make it all the way there.

“Every game, you have a chance to see something that you have never seen before,” Baker said. “And because these are 18-to-22-year-olds, sometimes it’s something crazy and nonsensical. Sometimes a guy will throw a shoe. And sometimes a head coach will pump up a crowd because he helped incite a brawl.”

The penalties and ejections were issued at the half. The break settled things down a bit, but for Baker, it was hard to focus on what was actually going on in the game.

However, just when things seemed to be back to normal, they weren’t. Florida finished the game on top, and Baker headed to write his story. As he was sitting in a quieter spot of the press box with Zoom open on his laptop, Baker was merely listening for Mullen’s arrival to his postgame press conference.

He took a glance up, though, and was greeted with the sight of the “greatest cinematic villain of all time” on Florida’s Zoom. At first, Baker thought it might be support staff trying to lighten the mood — it was Halloween after all — but nope.

Mullen was dressed as Darth Vader just hours after participating in a brawl.

Or, in the coach’s words, trying to break up the brawl.

“I dissected it like the Zapruder film trying to figure out what happened and why,” Baker said. “And I did not see Mullen trying to separate players or get his players out of trouble. That is not what I saw. But that’s what he said.”

The costume following the incident just added to the bizarreness of what should have been a pretty standard win for the Gators. Ortega would write of Mullen’s Halloween costume that day, and Baker would pen an article about it later that week.

Then everyone moved on.

In the days following, multiple punishments ensued for players, coaches and the schools. Both UF and MU released a joint statement that Sunday and were reprimanded by SEC Commissioner Greg Sankey. Three more Missouri players were suspended for half a game — Markell Utsey, Dylan Spencer and Chad Bailey. Mullen was fined $25,000 for his participation.

But the Gators wanted to move on quickly. Florida’s “next up” after Missouri was Georgia, perhaps its biggest game of the season.

“Everybody knew if Mullen was going to get to where this team was supposed to get, he had to beat Georgia, he had to get over that hump,” Baker said.

Florida did beat Georgia the following Saturday and had four more wins before losing out the season. The Gators finished No. 7 in the College Football Playoff rankings and made a NY6 bowl for the third straight year.

The brawl was swept under the rug. But it’s time for holiday cleaning — and, Drinkwitz hopes, some snow — which means its coming right back out again, even if Mullen doesn’t want it to.

The resurfacing of the brawl has more to do with its Internet impact than anything else, though. It’s unlikely another full-scale brawl will break out between the two teams when they meet Saturday.

“I think the meme factor is really high,” Ortega said. “I think we’re going to have a lot of opportunities to make a lot of jokes about what happened last year, what happened with the costume and everything and this game. But otherwise, not really.”

Then again, who knows?

Brady, Buccaneers take another crack at Rams in playoffs

Medvedev wins over Aussie crowd in win over Dutch opponent