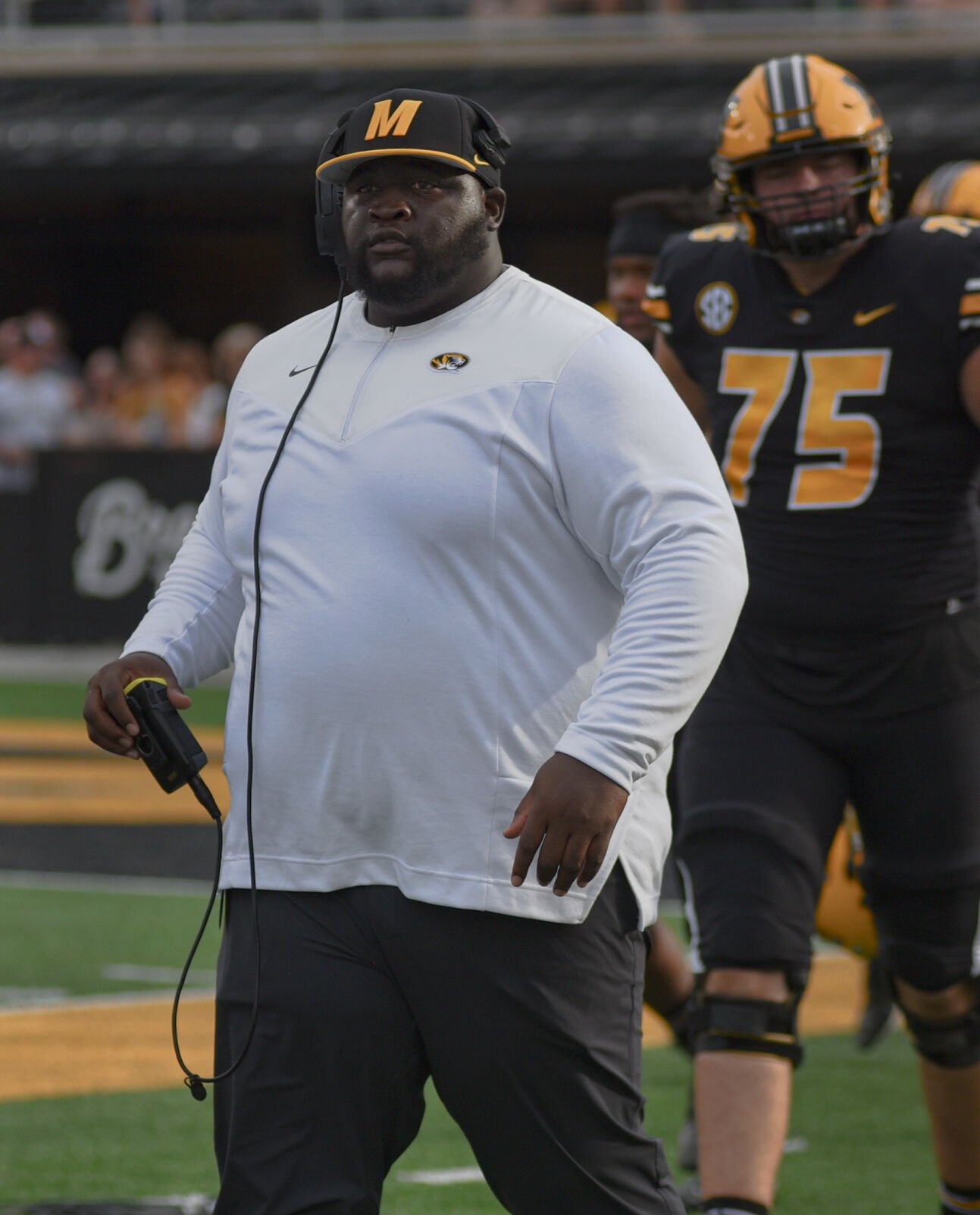 Al Davis watches from the sideline Saturday at Memorial Stadium in Columbia. Davis was promoted from an analyst to MU’s defensive line coach Oct. 3. 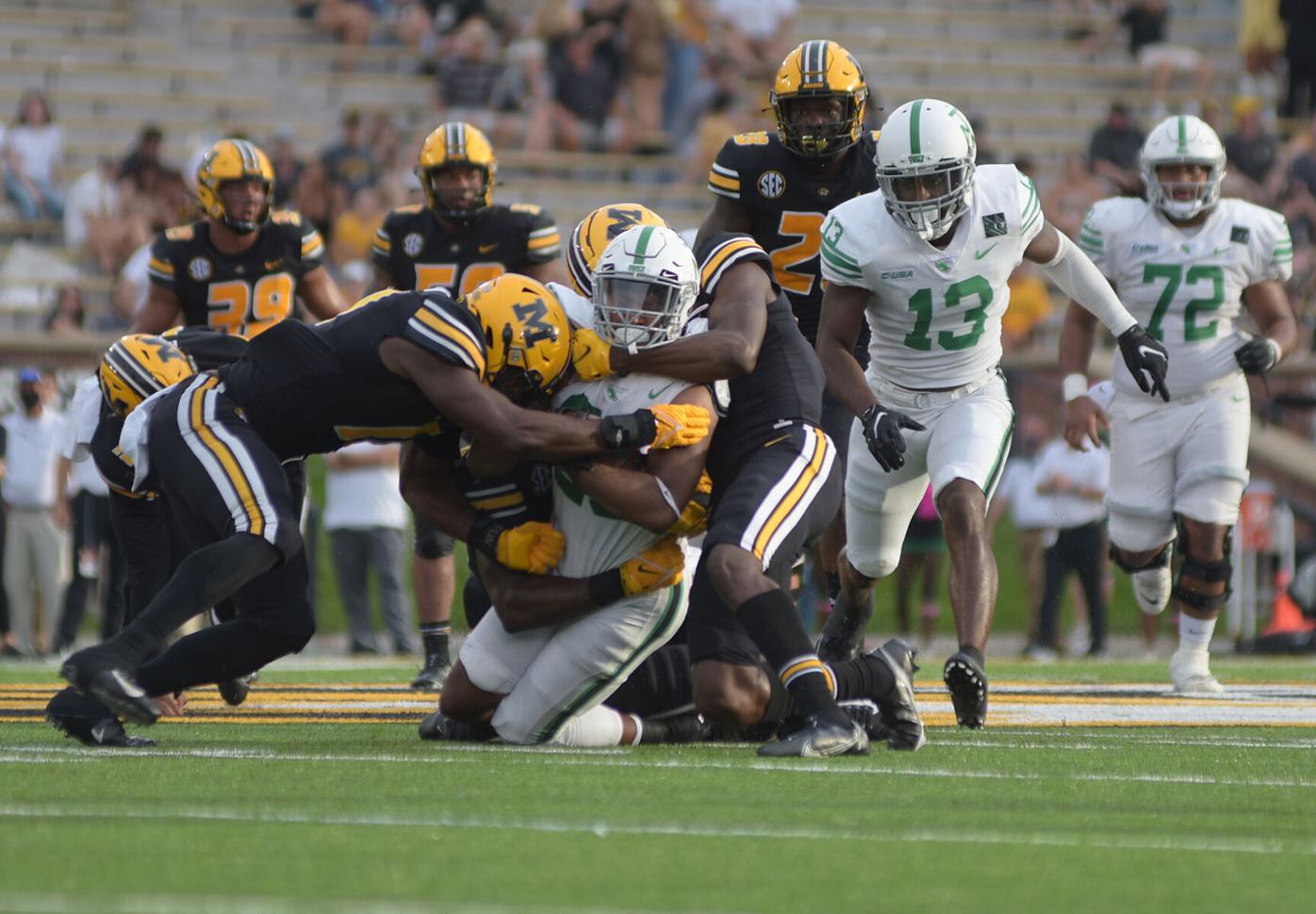 Members of MU’s defensive line tackle North Texas running back Isaiah Johnson on Saturday at Memorial Stadium. Al Davis has been watching film with the defensive lineman instead of having the players watch by themselves.

Al Davis watches from the sideline Saturday at Memorial Stadium in Columbia. Davis was promoted from an analyst to MU’s defensive line coach Oct. 3.

Members of MU’s defensive line tackle North Texas running back Isaiah Johnson on Saturday at Memorial Stadium. Al Davis has been watching film with the defensive lineman instead of having the players watch by themselves.

Al Davis lobbied for Greg Cross and Kody Cook to get a pair of vacant coaching jobs at Hutchinson Community College. It wasn’t the last time he’d change their lives.

Cross had heard about Davis — then Hutchinson’s co-defensive coordinator — through Cross’ younger brother while he was coaching in Atlanta. Cook didn’t know Davis yet, but he soon would.

They’d each been at Hutchinson before Davis’ arrival but had moved on to other opportunities. But then — through Davis — the chance to return arose.

They both joined the Blue Dragons’ staff. Davis’ petition went further than either could have imagined. Cross named Davis as godfather to his 1-year-old son. Davis was a groomsman at Cook’s wedding.

Missouri’s defensive line needs a spark. Prior to Davis being promoted from defensive analyst to defensive line coach Oct. 3, the Tigers’ line had been punched around for five games straight and had careened to the canyon floor of the FBS run-defense rankings.

The Tigers job presents a daunting task, but there is no doubt in Cook and Cross’ minds that Davis is destined for success.

“When he left, (Hutchinson was) No. 3 in the country, we just achieved our first No. 1 ranking ever, and then he left and went to Illinois, and the following year we won the national championship,” said Cook, now the Hutchinson wide receivers coach. “And I think a big part of that has to do with what Al did before he left here, the foundation he laid, the relationships he made, just how he coached and really bought into kids off the field, not only on the field.”

“I’m excited for him, to see what he’s gonna do,” Cook said. “We know the success is not gonna happen overnight. He understands that. We talked about it. … He’s a hard worker, and I believe in him.”

The coaches trust Davis as a friend as much as a football coach. That’s a big part of why his former colleagues expect him to excel in all facets that the Missouri job may demand.

Before making Davis the godfather to his newborn, Cross saw what Davis meant to his younger brother, Adrien, whom Davis coached before Cross’ return to Hutchinson as running backs coach. Cross said his brother would call and “rave about Coach Davis” and how he was helping him stay locked in on and off the field.

Cook only knew his girlfriend for one month when Davis told him he’d found his wife. Cook said Davis told him, “I know this is going somewhere. I know it when I see it.” Half teasing, half serious, he asked, “Hey, just let me be Uncle Al?”

A big character and a big heart are strong traits to have as a football coach. But they aren’t the only things needed to solve Missouri’s defensive woes. MU also needs the football coach in him for that.

Luckily, Cook and Cross trust him inherently on all things football, too.

Cook said that he could immediately tell Davis had “that natural football IQ,” that he commands every room he walks in and that coaching isn’t only a 9-to-5 job for him. He remembers asking Davis out to get lunch, only to get be turned down because Davis needed to finish drawing cards with play designs on them.

“There’s not a lot of people doing that at any level, especially the SEC level, and I know he’s still doing it there,” Cook said. “I think that’s just one of those things that’s a little thing to a lot of people, but to Al Davis, it’s a big thing.”

Cross called him Davis a “film guru,” said he’s very attentive to detail and that he brings unparalleled energy to his roles. His colleagues have seen that energy win games all by itself — most notably a rivalry game against Butler on April 3, 2019.

Before the National Junior College Athletic Association No. 1-vs.-No. 2 matchup, Davis texted all of the position coaches to have their players in the weight room early on game day.

He wanted to talk to them.

By the half, Hutchinson was up 28-3. The Blue Dragons cruised to a win. Cook said Davis’ speech was the reason.

“When he walked into that weight room to talk to those players, you knew that he was in command, he was in charge, he was the energy behind all that,” he said. “I really think Al really propelled us to jump on top of them like we did and really kinda blow them out. I attribute that to him, and I’ve seen him do it multiple times throughout his career.”

Cross and Cook both made reference to how locked in Davis is and lauded his ability to individualize training to specific players and command attention in any room into which he walks.

They bought into his ability, like Davis’ players did, because they’ve seen it live — and not just as colleagues at Hutchinson.

To this day, Cook and Cross still reach out to Davis for advice on their position groups.

“I would always draw up the offense and send it to Al and be like, ‘How would you stop this?’ Cook said. “And he would hit me back within minutes, ‘I would do this. I would play this coverage, have this blitz. I’d be ready for you.’”

The offer to help is always open.

“Even though I’m at a junior college and he’s Division I, if I text him and say, ‘Hey, I need your advice,’ or ‘I need your input,’ he’s gonna always make time. And he’s not too big-time to answer a phone call or to respond to a text, even though he’s busy,” Cross said. “He’ll call me or text me (and) say, ‘I’m in a meeting,’ or, ‘I’ll get back to you,’ or he’ll call me on the drive home. He’s always there.”

Sometimes they don’t even need to reach out.

In the week leading up to Hutchinson Community College’s national championship game June 6, which the Blue Dragons won, Cross was in contact with the coach. Davis was already at Missouri. He’d left Hutchinson more than a year before it for a position at Illinois.

“He was in my ear throughout that whole week about preparation, being ready, making sure the kids are relaxed, (making) sure they have fun,” Cross said. … “Still to this day, he talks to me. He keeps up with what we’re doing at Hutch.”

Cook knows what it’s like to be on the opposite end of Davis’ film-obsessed studies. While a quarterback at Kansas State, he went up against a Davis-aided defensive line.

Davis was Arkansas’ graduate assistant when Cook played in the Liberty Bowl on Jan. 2, 2016. One of the Razorbacks’ defensive linemen that day was Jeremiah Ledbetter, whom Cook said he knew.

“(Ledbetter) came up and smacked me on one play, (and) I was like, ‘Damn, Leddy, chill out bro,’” Cook said. “He was like, ‘Nah, big fella, can’t do that today. Big Dog on me.’ I didn’t know who that was at that point in time, but now, meeting Al, I can understand why he was playing like that.”

There wasn’t any ill will there. Davis is just competitive. He later apologized in person to Cook’s mother for having her son roughed up, qualifying it by saying that “the Razorbacks needed to win that day.”

But the reasons for reaching out extend beyond football. Cook and Cross know they can connect at any time, because they’re contacting a friend.

The connections are already beginning to form at Missouri.

Head coach Eliah Drinkwitz said Tuesday that he didn’t believe there was necessarily a renewed sense of confidence because of the coaching change but that there was just a “connection.” Mekhi Wingo said that the defensive linemen aren’t just watching film by themselves anymore but have been sitting down with Davis to watch their work together.

That won’t come as a surprise to those who have shared a path with him.

“Just as well as I rave about him as a coach, he’s an amazing person. He’s an unbelievable friend. That’s the biggest thing,” Cross said. “Unbelievable. I met his family, and they accept me as if I’m family. He has a big heart; he cares a lot. He’s a very, very passionate guy.”

Davis already has done life changing. How about season saving?

“It’s so easy to say so many good things about him,” Cook said. … “That man changed my life and has been such a big influence on us that I can’t wait to see what he’s gonna do.”

Dayton shocks No. 4 Kansas on buzzer-beater in Florida