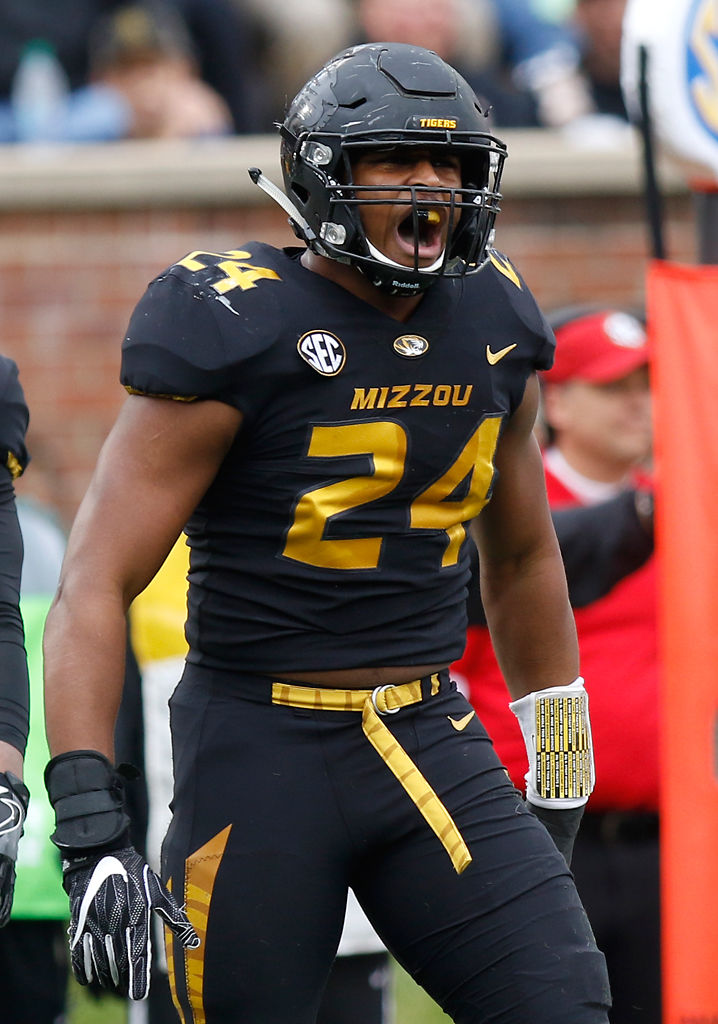 Missouri linebacker Terez Hall celebrates after a play in a Nov. 4 game against Florida on Faurot Field. 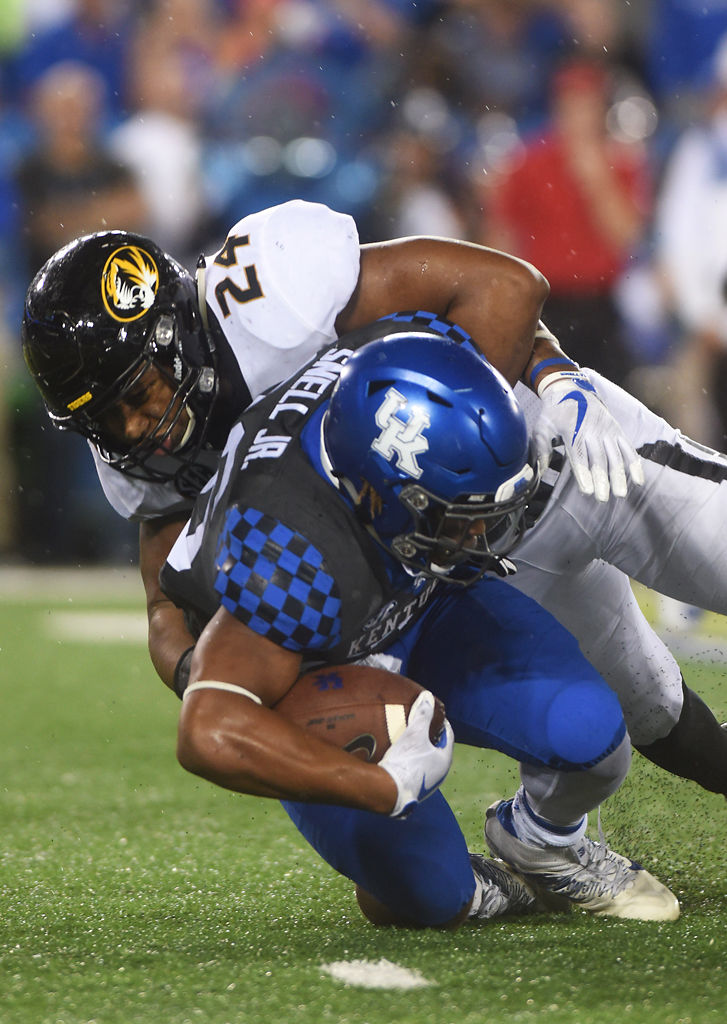 Missouri linebacker Terez Hall takes down Kentucky running back Benny Snell Jr. during the first half of an Oct. 12 game in Lexington, Ky. Hall posted 12 total tackles and 2½ sacks during the game.

Missouri linebacker Terez Hall celebrates after a play in a Nov. 4 game against Florida on Faurot Field.

Missouri linebacker Terez Hall takes down Kentucky running back Benny Snell Jr. during the first half of an Oct. 12 game in Lexington, Ky. Hall posted 12 total tackles and 2½ sacks during the game.

The first time Terez Hall took the field with the Missouri Tigers, they were the defending SEC East champions. Although Hall was a true freshman at the time, he had the bravado to match his team’s stature.

But on his very first play, in the 2015 opener against Southeast Missouri State, Hall’s world flipped upside down — literally.

As Missouri booted the ball downfield, he raced after it. Soon enough, he spotted two Redhawks set up to block, side-by-side. He made a beeline for them.

“I ran down there and I don’t know what I tried to do,” Hall said. “I ran at the tight end, and he stepped one way. And I tried to spin out of it. He grabbed my legs, and the other guy grabbed me up high. And they both slammed me. Boom!”

The Tigers’ sideline erupted as players got on Hall’s case. But the embarrassment of the play didn’t stop then. Days later, then-defensive coordinator and linebackers coach Barry Odom snapped at him in a meeting: “You can’t do that!”

Hall started his Missouri career with big expectations for himself, but the young linebacker needed to grow as a person to become the football player he strives to be. His maturation from “selfish” freshman to senior leader not only played a part in the Tigers’ 2017 revival, it also mirrors the growth of Missouri’s program since the turbulent year he arrived on campus.

Hall came into fall camp his freshman year with energy. The linebacker said he was “balling” for the first three days, but the grind of training camp settled in soon enough. On the third or fourth day, he stood in the back of the end zone during practice, fighting through soreness and fatigue.

“Man, it feels like it’s been three weeks,” Hall replied.

Odom was “extremely hard” on Hall even as he took the latter under his wing, former Tigers linebacker Eric Beisel said. It makes sense considering Odom is the coach who recruited Hall to Missouri. Looking back now, Hall realizes he wasn’t taking proper care of his body.

“It helped mold who I am. It teaches you to push through a lot of stuff. … My freshman year was tough, especially because I was selfish. I was trying to get the job, trying to be the best on the team.”

As most know, 2015 was a tumultuous year at the University of Missouri. Student protests of alleged administrative inaction regarding the racial climate on campus, which included a brief strike by the football team, made national headlines. The team itself crumbled to a 5-7 record, and head coach Gary Pinkel announced at mid-season that he would retire at the end of the year after being diagnosed with non-Hodgkin lymphoma — a kind of blood cancer.

According to Hall, the locker room was a more selfish place back then. There were still great leaders such as Kentrell Brothers, Charles Harris and Evan Boehm, but many of the Tigers seemed to be looking out for No. 1. The atmosphere rubbed off on the young Hall.

“Guys were playing for stats,” he said. “They were playing more to go to the NFL. Like, ‘I’m going to win this award and win that award.’”

After playing primarily on special teams as a freshman, the linebacker got off on the right foot during spring camp his sophomore year and, despite injuring his shoulder, briefly overtook Donavin Newsom for a starting position.

Then Hall hit a rut.

Early in the 2016 season, the Tigers struggled to right the ship they’d steered off course in 2015. Hall was no exception. In his words, he was still the “selfish guy” he was the year before.

A conversation with Beisel, the then-junior linebacker known as “Zeus,” helped catalyze Hall’s transformation. Hall and Beisel are close friends, both football junkies with the self-assured attitudes linebackers so often have. Beisel encouraged him to pour everything into the team because he would have limited time to accomplish their goal of creating a “Mizzou dynasty.”

Hall remembers one particular message Beisel relayed: “You can’t let ‘em take the love out of football for (you).”

Hall’s relationship with God became the driving force in “every role” of his life, including the football field.

“People play for different reasons,” Hall said. “Like playing to help their family out of poverty, (or) just to go to the NFL. Me, I just play for God. That helps run my life. Without him, none of this stuff would be happening. Every play I’m thanking him out there. I’m going as hard as I possibly can. I know if I go weak, it means I’m letting him down.”

As the season wore on, Hall improved. He notched a career-high six tackles in the Tigers’ win over Vanderbilt in mid-November, for example. Missouri matched his improvement, winning two of its last three despite finishing 4-8 overall.

Hall carried his momentum through the offseason and won the starting weakside linebacker job in training camp. In his new role, he was forced to make adjustments in areas such as film study. As a starting inside linebacker, he needed to learn opponents’ specific formations and patterns so he could call out plays on the field. Previously, as a backup outside linebacker, Hall didn’t focus on film because he could usually react to what the offense was doing.

Both Hall and Missouri stumbled out of the gate again in 2017. The Tigers started 1-5, and Hall quickly learned his athleticism couldn’t make up for mistakes against good teams.

But his game started to click in Week 4 against Auburn, partly due to a decision to try to focus on beating one man from start to finish — Auburn offensive lineman Braden Smith, a senior who finished the season as a first-team All-American.

Auburn pounded Missouri 51-14, but Hall feels it was the first time he had really held his own against difficult competition. With each passing game afterward, he felt more comfortable.

“I realized they put their clothes on just like me,” Hall said. “They’re all humans. It’s just if you want it more and you believe, and I just kept God in front of me the whole time.

“I’ll watch (the Baltimore Ravens’) C.J. Mosley during the season, and I’ll watch (the New Orleans Saints' ) Manti Te'o. And I’m watching them and I’m like, ‘Dang, they were going hard.’ I’m comparing film to film; I’m like, ‘Man, I’m not playing hard. They’re going harder. They’re running to the ball, they’re dominating on the blockers, they’re hitting people hard.’ And it looked like they knew what they were doing on the field. It wasn’t like they were just out there free-balling or playing around. That’s all that happened to me (before the Auburn game).”

As the linebacker gained steam, so did the Tigers. Although Missouri lost to Kentucky in its next game, the performance was the team’s best to that point, a hint of Missouri’s six-game winning streak to come. It also gave Hall a perfect opportunity to put his newfound dedication to preparation and film study to use.

On one particular Wildcats’ play, he easily recognized the setup.

It was a screen. Hall flew into the flat and found himself in perfect position to intercept the pass — it bounced harmlessly off his hands.

“I’ve been on the JUGS (automated passing machine) recently, so I won’t be dropping picks or anything like that,” Hall said.

By now, as he starts his senior season, Hall has emerged from the depths of 2015 to become a model athlete. On the field, inside linebackers coach Vernon Hargreaves said Hall has “all the things you’re looking for” at the position.

Off the field, as a leader, he spends plenty of time teaching younger linebackers such as sophomore Aubrey Miller Jr. the tricks of the trade — everything from studying plays to accepting coaching.

Hall isn’t afraid to take command vocally, either. He’s always one of the loudest players on the field and one of the steadiest voices in the locker room.

“He’s always bringing energy, too,” Miller added. “It’s contagious. If one person’s hyping everybody up, especially a leader like that, a guy on the Butkus Award watchlist, other people are going to feed into that.”

“It’s easy to follow a guy who’s practicing what he preaches,” Hargreaves said. “Sometimes, there’s guys that want to say, 'Do this and do that,' and they’re not doing it. Well, he’s doing it. When he speaks, guys listen.”

Given multiple opportunities to address the legacy he wants to leave at Missouri, Hall circled back to one theme every single time: family.

He gives Odom much of the credit for the work he’s put in to create a team-first atmosphere. After experiencing the self-centered atmosphere of the 2015 team, Hall wants to ensure a culture of brotherhood will exist within the program long after he leaves. This means upperclassmen visiting freshmen on-campus. It means scheduling team events such as cookouts and trips to the movies. It means starters helping backups at every opportunity, even as the backups are competing for the starters’ jobs.

“We’re trying to make something happen. It’s more than just this football season. We’re trying to be brothers. Say, for instance, I get married down the road. I want them to show up at my wedding. That’s what we’re trying to leave here. We’re not just one year and done; we play together and that’s it. I say if we go out together and someone pops off, we’re all going to get in trouble; not just one. That’s how I see it out. … That’s our legacy. We’re together.”

But that isn’t the only mark he’s looking to leave behind.

“I see a possessed man in Terez Hall,” Beisel said. “And I mean that in a good way. Not only does he want to do it for that team, he wants to do it for the city and the culture. … I know for a fact that he wants to change the culture of Mizzou football and make it a winning culture for years to come.”