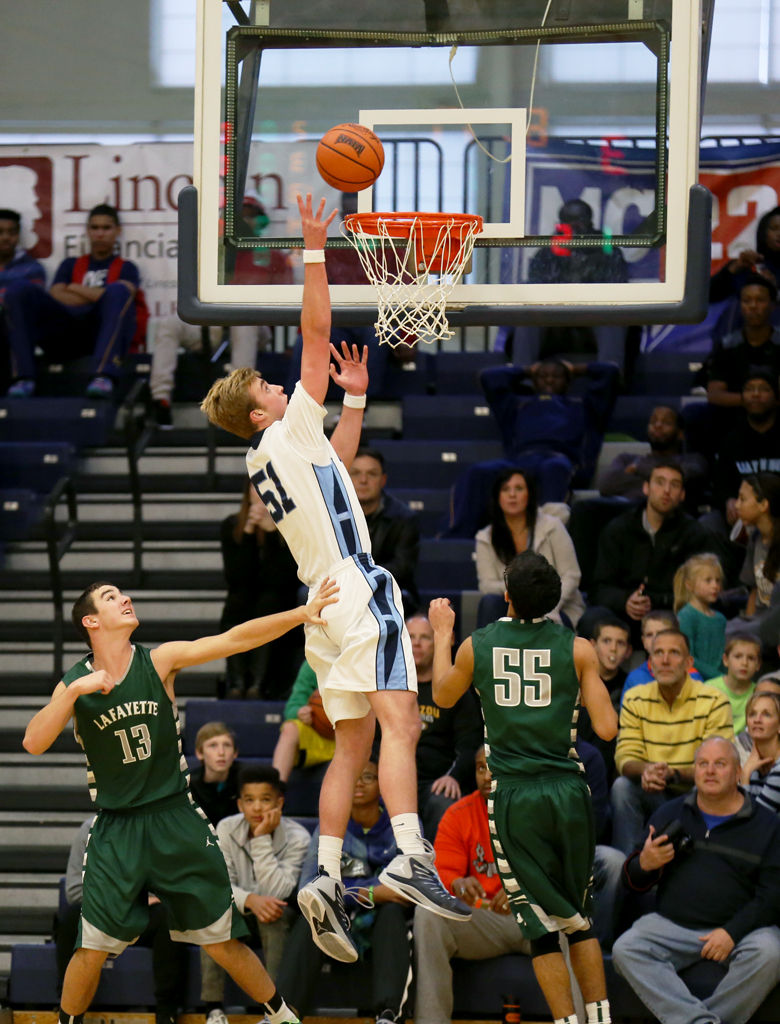 Tolton forward No. 51 Josh Boyer goes up for a basket during a Sunday game against St. Joseph-Lafayette at the Norm Stewart Classic at Columbia College. Tolton won 67-36. 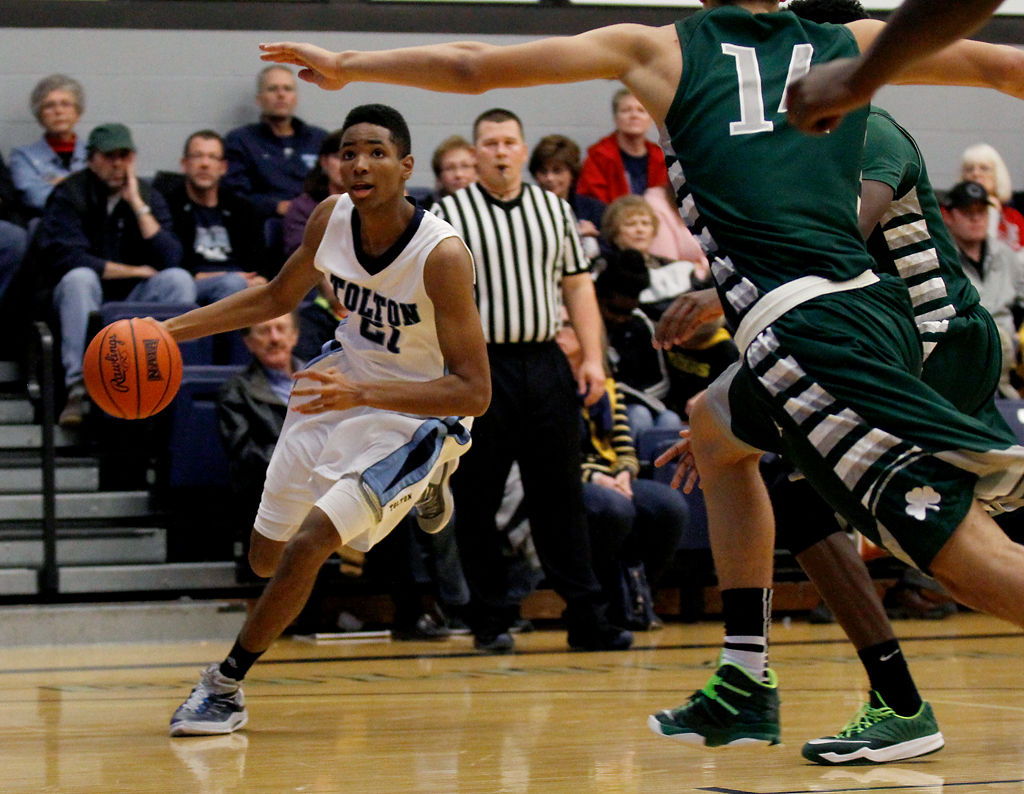 Tolton guard No. 21 Kenan Brooks drives the ball down the court Sunday during a 67-36 win against St. Joseph-Lafayette at the Norm Stewart Classic at Columbia College. 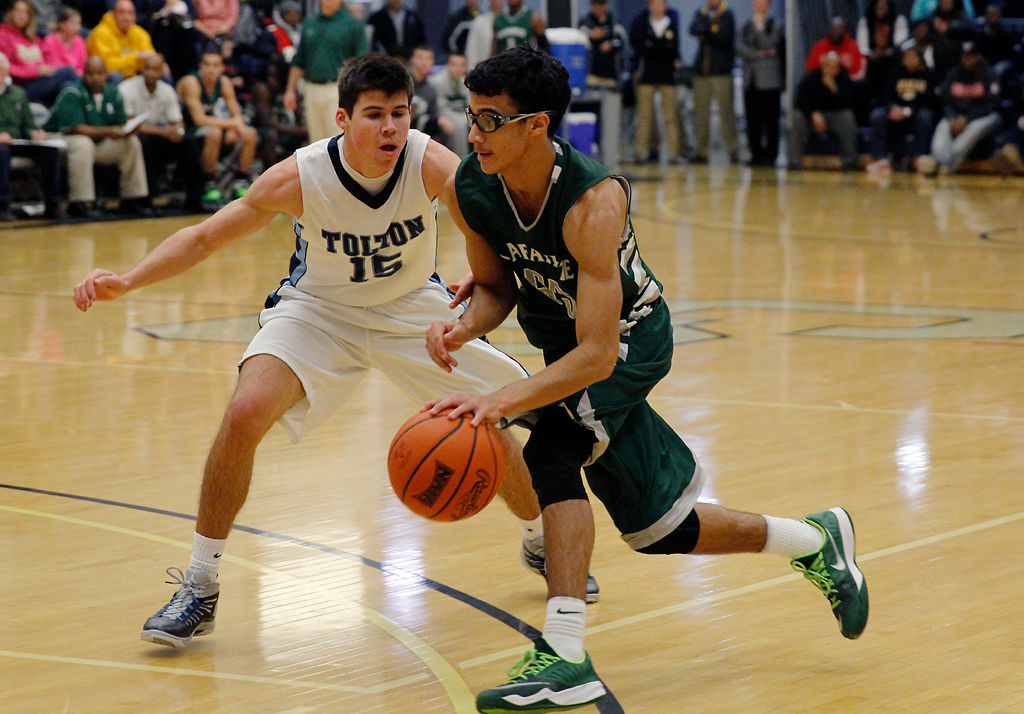 Tolton forward No. 51 Josh Boyer goes up for a basket during a Sunday game against St. Joseph-Lafayette at the Norm Stewart Classic at Columbia College. Tolton won 67-36.

Tolton guard No. 21 Kenan Brooks drives the ball down the court Sunday during a 67-36 win against St. Joseph-Lafayette at the Norm Stewart Classic at Columbia College.

“Josh! Josh! Josh Boyer! B3!” Osborne yelled, trying to get his senior forward's attention. Boyer whipped around, nodded in confirmation and yelled back, “Yeah!”

On the next play, Osborne shouted to sophomore point guard Isaiah Wilson, “Boyer! Set it up!” Wilson listened. Boyer caught a chest pass inside the paint, turned and reached over two defenders to put one up off the board and extend Tolton's lead to 20 points.

Boyer was a key presence on both offense and defense for Tolton, leading his team to a 67-36 victory over St. Joseph-Lafayette at the Norm Stewart Classic on Sunday. The Trailblazers are now 3-0 in their first season playing in Class 3.

“We wanted to utilize Josh," Osborne said. "We felt that he hadn’t been getting enough touches early on in the season, especially in the paint. A guy that size with that skill set is going to command a double-team. Once that happens, it opens up the rest of the perimeter. So we wanted to work the inside-out game and really push the ball in transition.”

The majority of Tolton's points came in transition with 31 total rebounds, 20 of them defensive. The Trailblazers forced the Fighting Irish to 22 turnovers and limited them to shooting 32.6 percent from the field. St. Joseph-Lafayette was the Class 4 runner-up last season.

“Oh, it’s a big deal," Boyer said. "We were really excited about it, so it's really kind of reassuring to come out and get a good win out of it and be confident for the future.”

The game got off to a tough start, with the score tied 7-7 early in the first quarter. Frustrated, Osborne called a timeout. That's when the Trailblazers took off. Tolton scored 15 unanswered points before the end of the period, a momentum that would carry over to the rest of the game.

“Everyone’s going to have adversity in games, but it matters what you do," Porter Jr. said. "We could’ve just slumped down. It was 7-7 early and we could have not played our hardest, but we bounced back in a positive way.”

Despite this being Tolton's third 30-point win this season, Boyer didn't tout the team's offense as its strength.

“I have to think it’s more of our defense," he said. "Offense comes, but you can have bad days on offense with shots not falling. I think keeping people from not scoring is really what we have to impress with best.”

Young, No. 4 Alabama face stiff test from No. 1 Georgia's D

With a shot at No. 1, Bahamas no holiday for Collin Morikawa