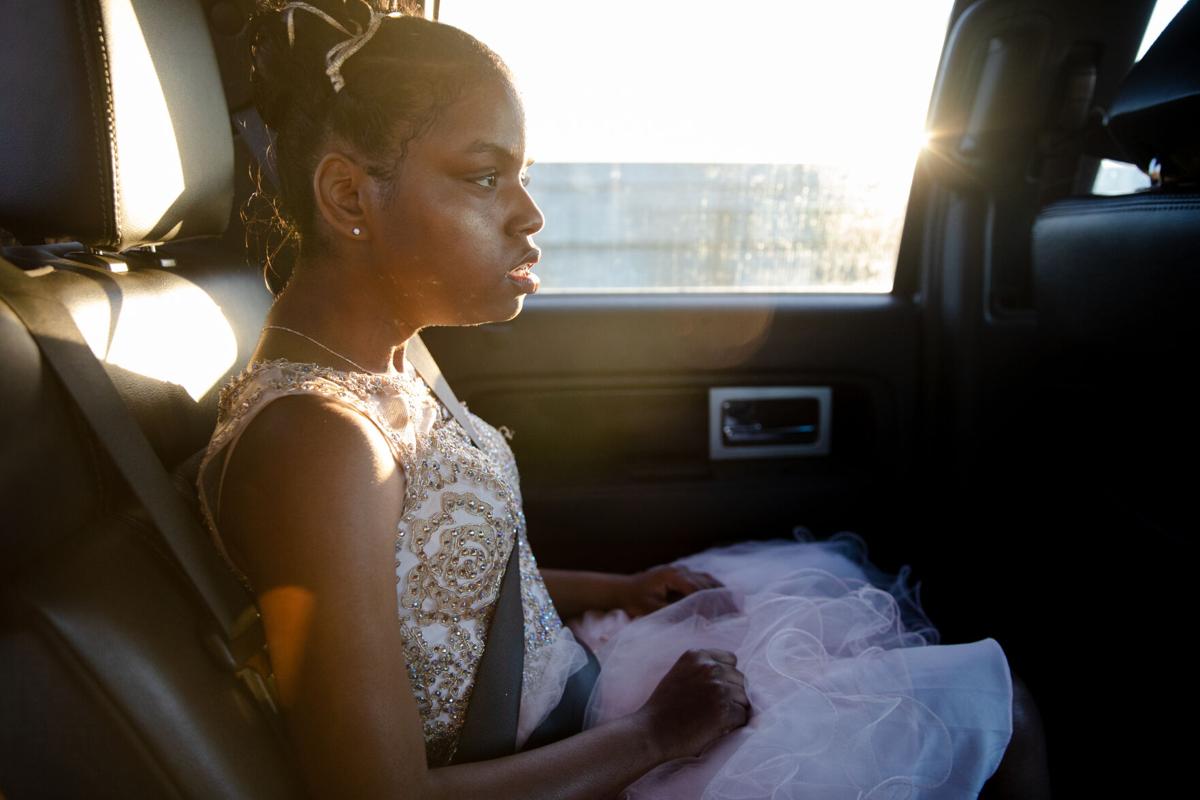 Shayla clenches her fists because she feels nervous on the way to the prom with her long-time friend, Kaden, Feb. 7, 2020. For Shayla, the prom is not just an exciting event. It is a nerve-racking challenge. 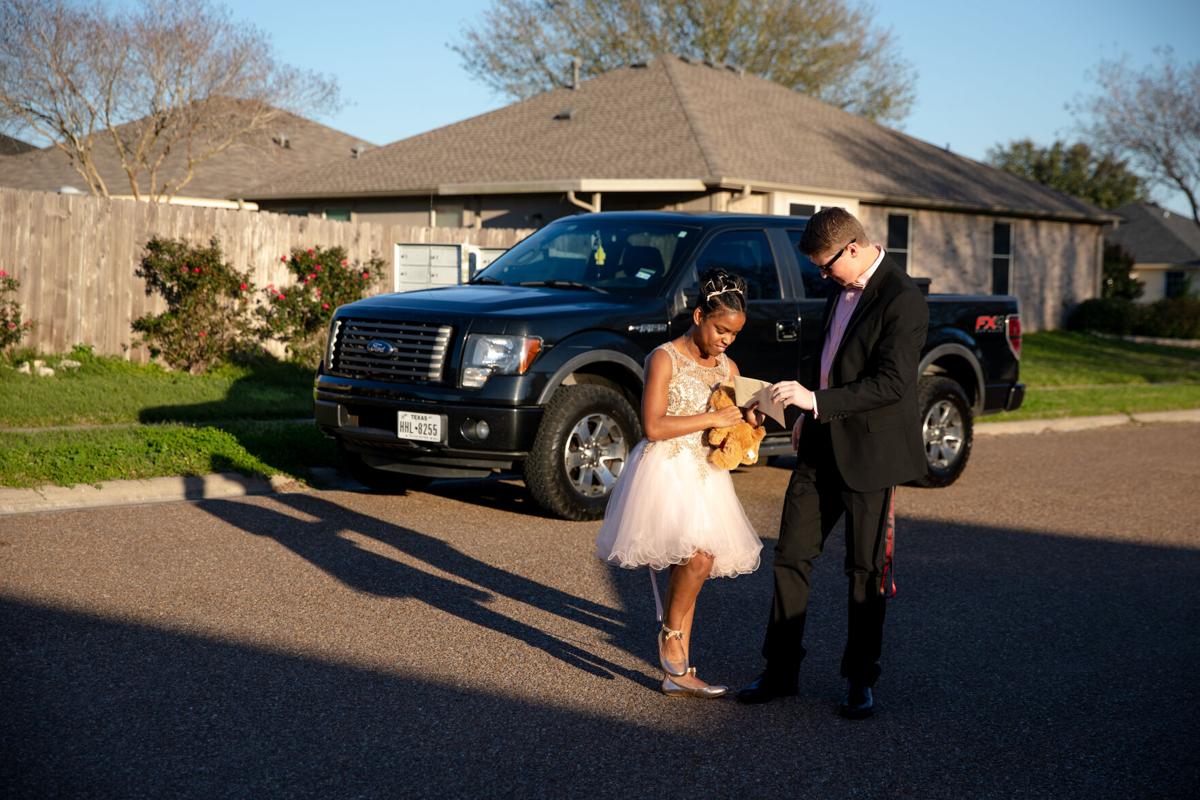 Kaden gives Shayla a letter and a teddy bear as a gift for the prom Feb. 7, 2020. The letter writes, "Shayla, thank you so much for being an inspiration and such an amazing person overall. You have been such a blessing to me in more ways than I can count. Let's have fun tonight!" 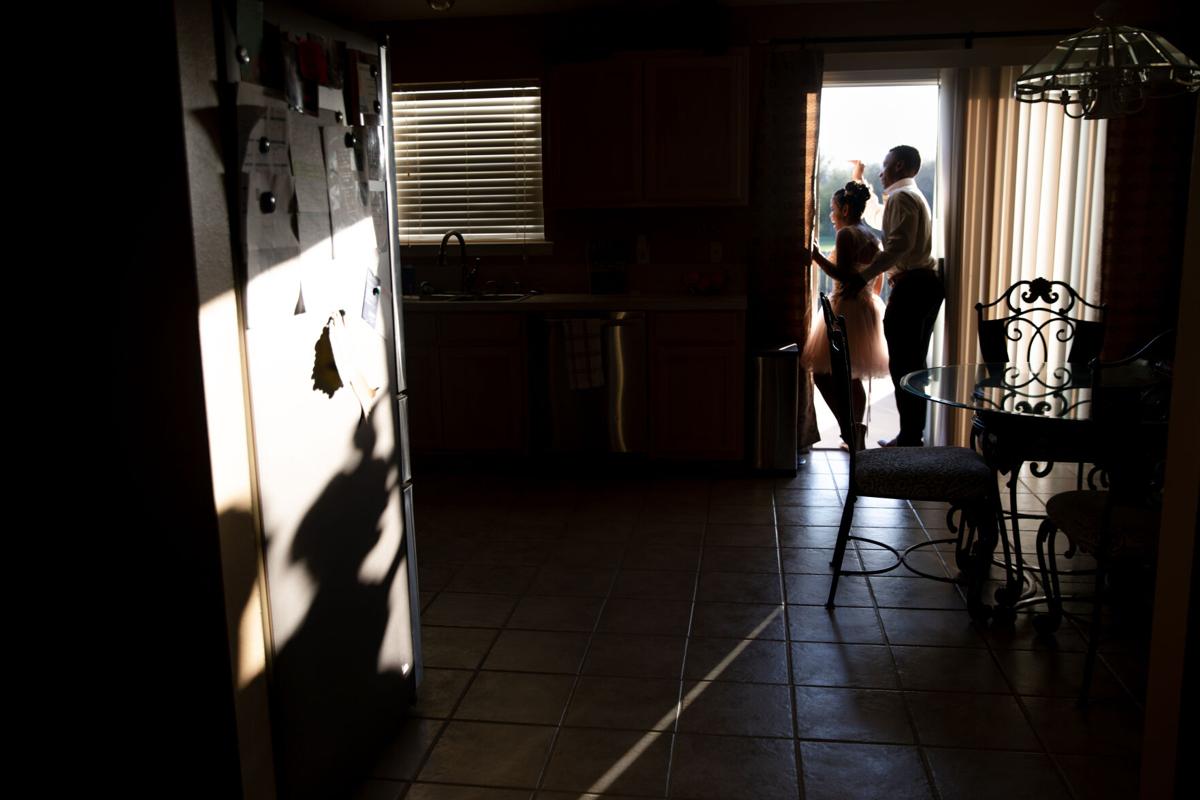 Shayla and her dad, Kelvin, say hello to their neighbor before the prom Feb. 7, 2020. "She really wanted to [go to the prom]," said Shayla's mom, Willishia Rudd. "We always encourage at least [to] try something first. Give it a couple of times." Shayla's neighbors and friends visited her house on the prom day to celebrate the event. 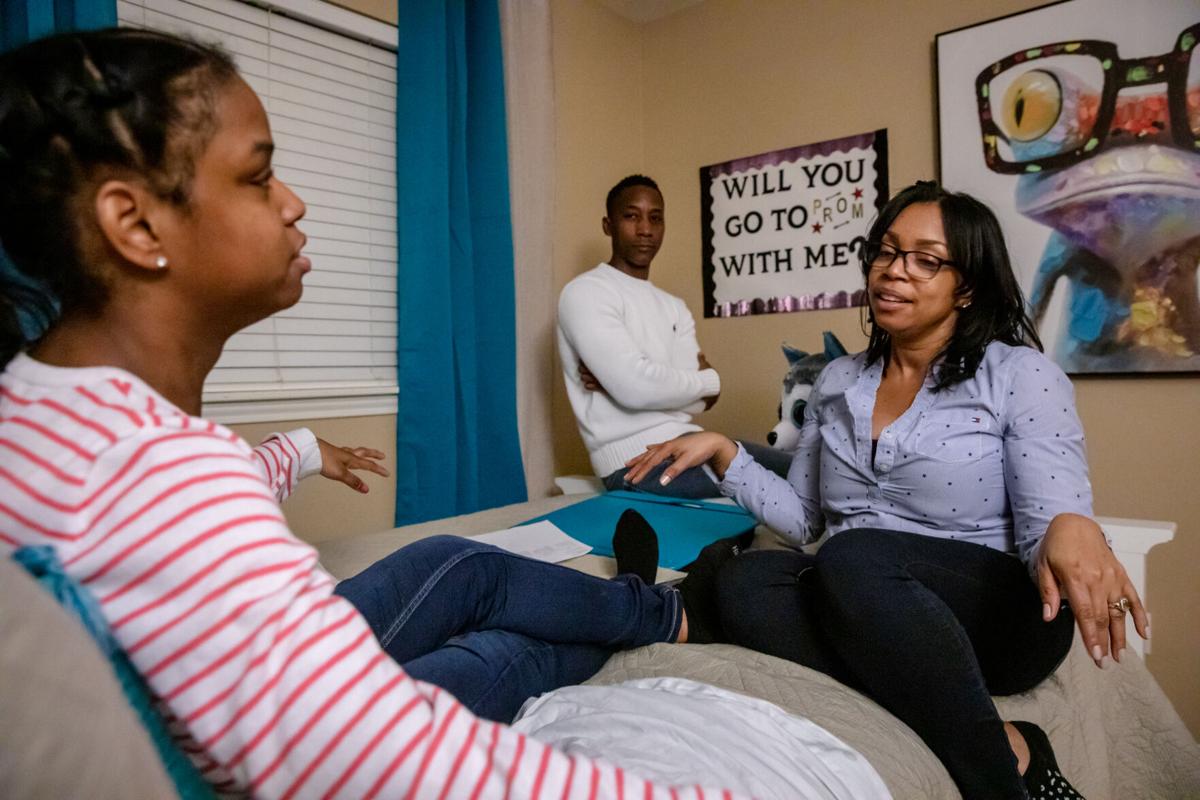 Shayla practices how to pose with her mom on the night before the prom while her dad watches Feb. 6, 2020. The poster that her long-time friend, Kaden Kolle, 16, brought to her house with flowers hangs on the wall. "I wanted to give her the whole experience," Kaden said. Kaden and Shayla share many childhood memories because his mother nursed Shayla when she was younger. "She's like a sister to me," Kaden said. 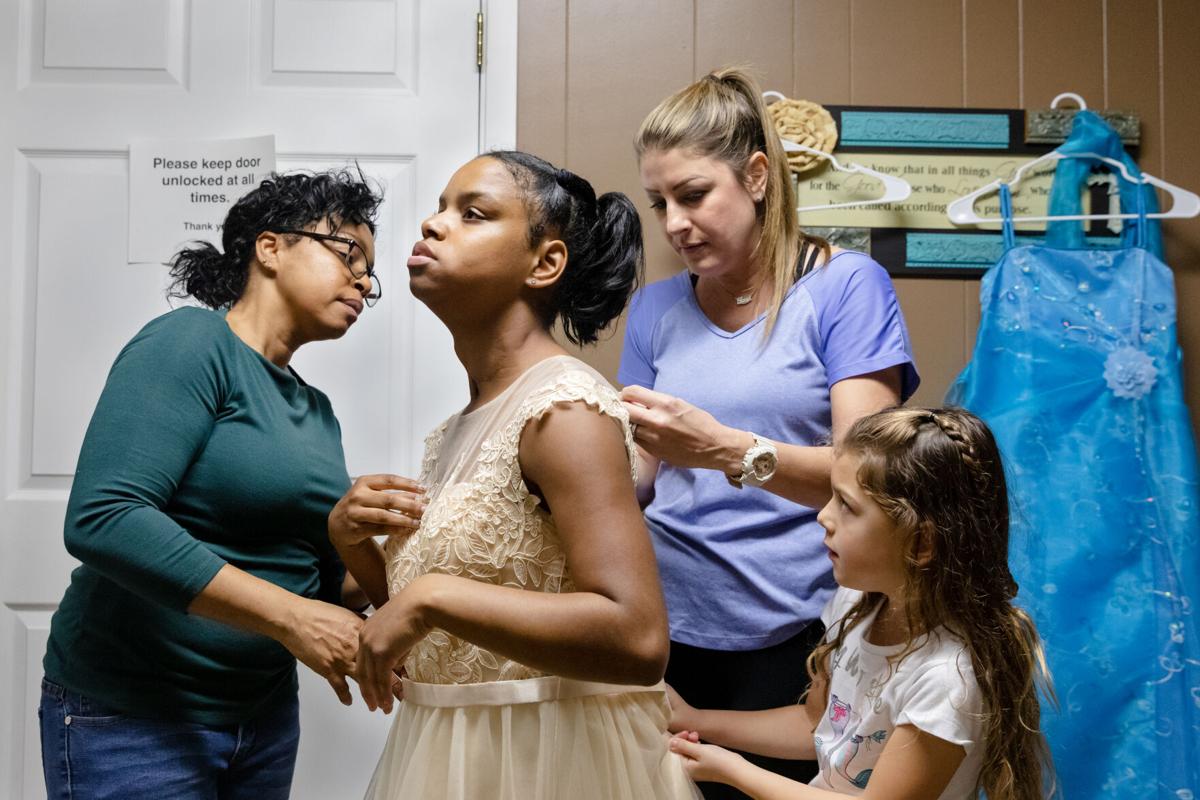 From left, Shayla's mom, Willishia Rudd, Jessica Kolle and her daughter, Kynlee, 6, help Shayla, 16, try on a dress for the Night to Shine prom event on Jan. 26, 2020. Jessica nursed Shayla for six years since when she was six years old and couldn't talk or eat without a feeding tube. Their families have stayed close ever since. "We are like some of their family here," Jessica said. 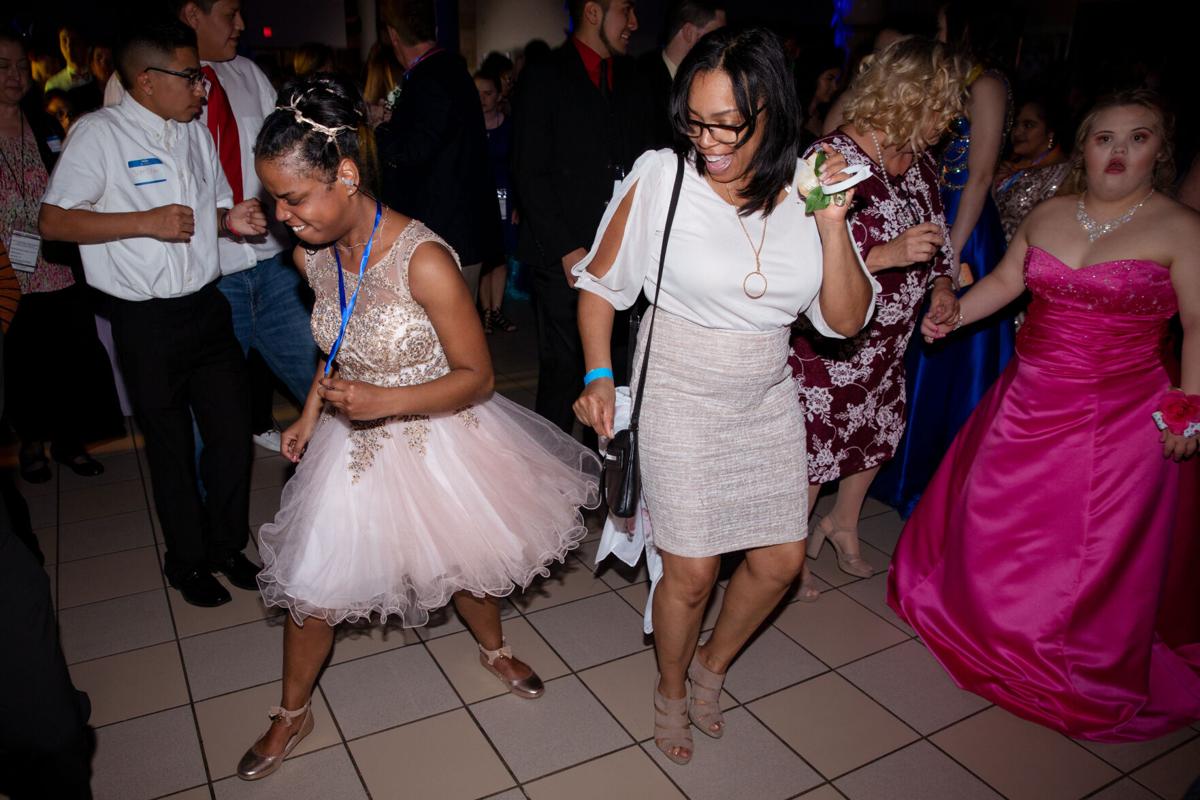 Shayla and her mom, Willishia, dance to the music. Shayla continued to dance to music throughout her ride back home Feb. 7, 2020. "It's just a door," Willishia said about a new experience like the prom for Shayla. "You gotta walk to the door. We don't know what's behind the door until we open it up." 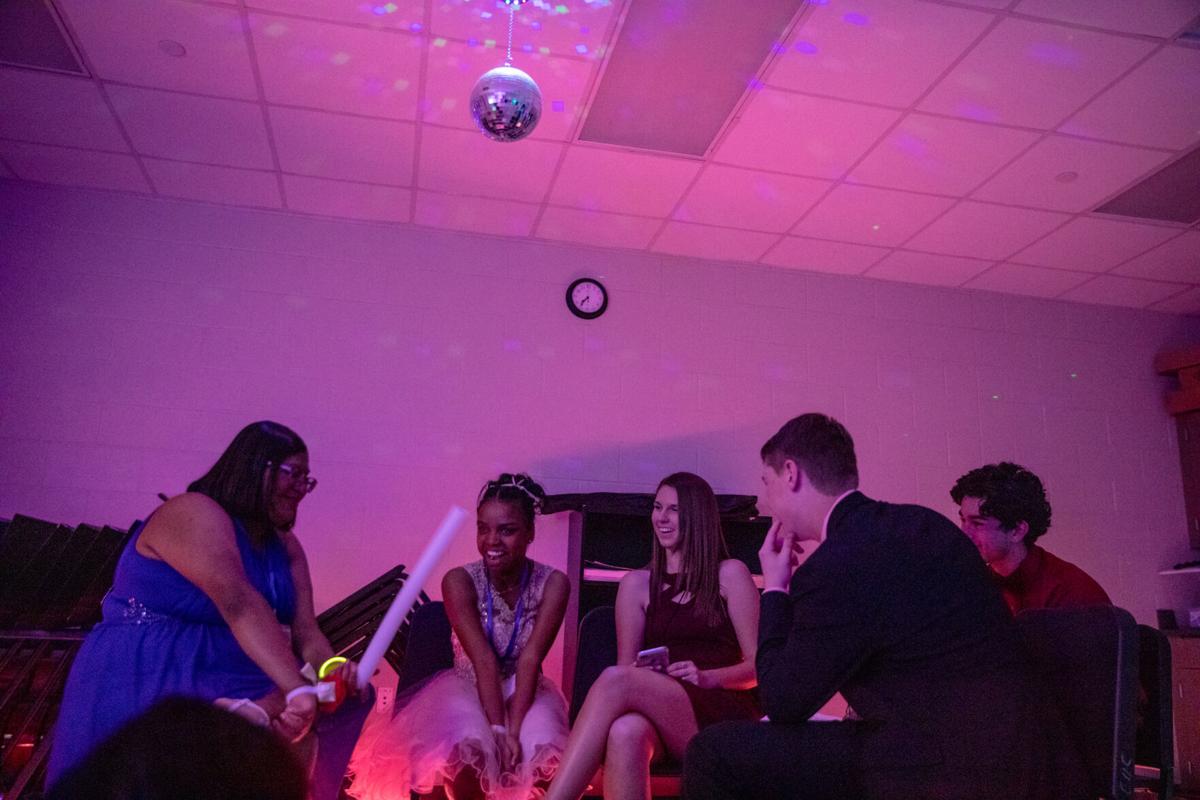 Shayla talks and laughs with her friends at the sensory room with a calm environment. After rocking her head up and down to the music a few times at the dance hall, Shayla would head back to the sensory room Feb. 7, 2020. Kaden followed her to wherever Shayla wanted to go to calm herself down. With her sensory processing disorder, sound and movement around her often become overwhelming. 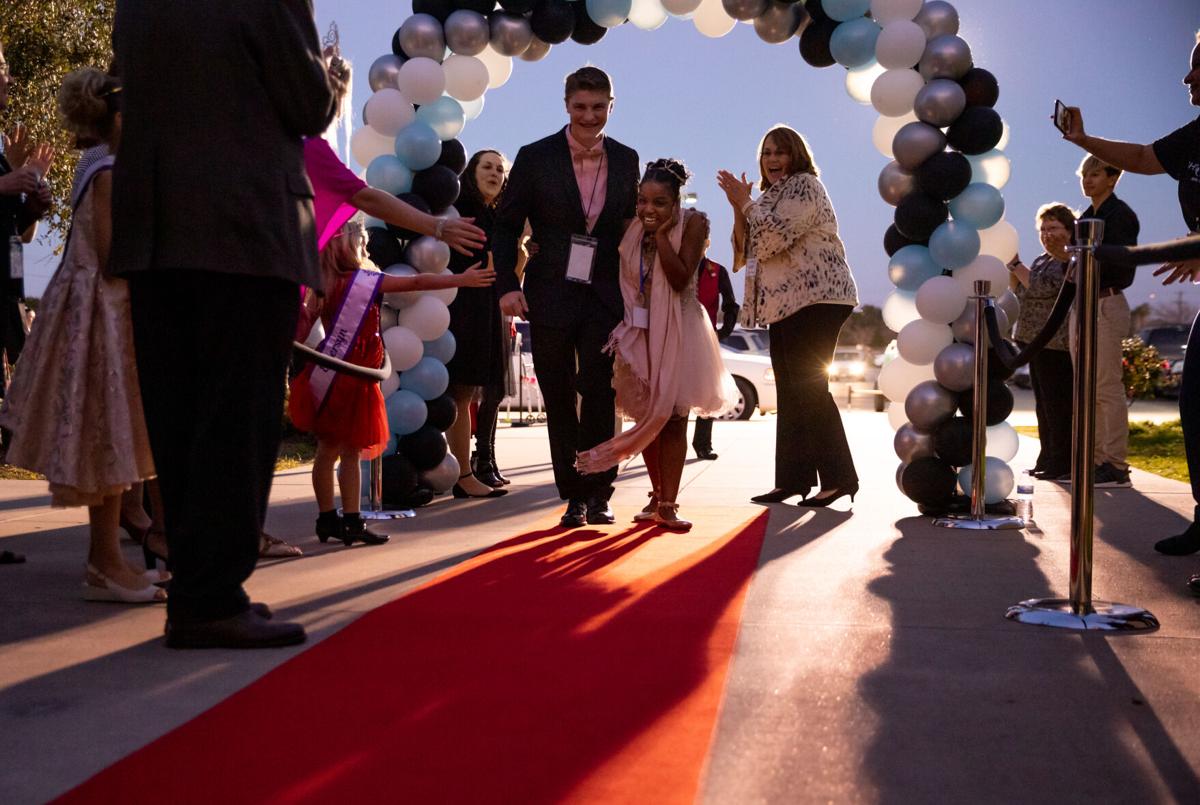 Kaden and Shayla walk on the red carpet after the limousine ride at the Victoria West High School on Feb. 7, 2020. As a surprise gift, Shayla's parents asked the organizer to turn on the song, "Look What God Gave Her," which Shayla said she wanted to listen to when walking to school. Shayla couldn't stop smiling at the song and people cheering for her. 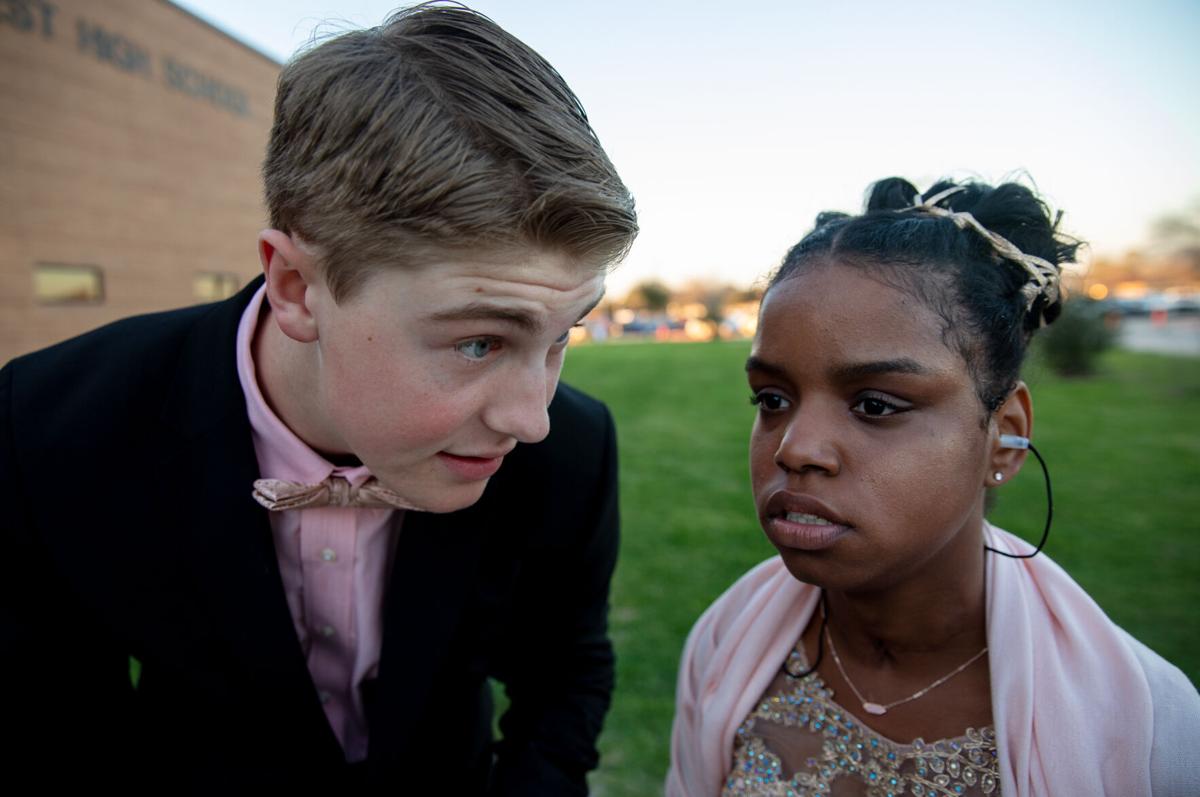 Shayla feels nervous and stops walking toward the red carpet Feb. 7, 2020. Kaden bends over and whispers to convince her. "I'm just trying to be there and be that rock for her," Kaden said. "Someone that can explain to her how things are and how she can overcome that. I just hope that throughout the years, I've given her a peace of mind that she's always got somebody there for her and she's got somebody to talk to." 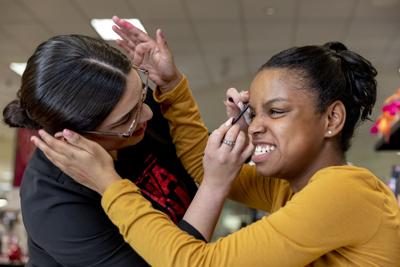 It started with a letter.

In Victoria, Texas, it's not uncommon for members of the community to invite the local newspaper, the Victoria Advocate, to community events. It's a perk of what photojournalist Yehyun Kim describes as a close relationship between the paper and the city. And so, when the organization that runs 'Night to Shine' sent a letter to the paper asking them to cover the event, Kim recognized the event's potential as a visually-driven story.

Instead of the standard, written article, "I saw it and thought, 'Actually, it would be much better in photos,'" Kim said.

Kim was working as the Victoria Advocate's photojournalism intern when the letter came in. She graduated from MU in 2019 with her master's degree in journalism, focusing in photojournalism. While at MU, she worked as a photographer at the Missourian, interned for USA Today, was a graduate coordinator for the Missouri Photo Workshop, was a participant in the Eddie Adams photojournalism workshop and studied abroad at the Danish School of Media and Journalism, one of the world's top photojournalism schools. Prior to her time at MU, she had worked as a teacher in her native South Korea and as a reporting intern for Voices of New York.

Shayla Rudd became the main focus of Kim's story. Rudd has autism, ADHD and a sensory processing disorder. New situations, like a prom, make her anxious and Kim recognized that having a photographer follow her around would amplify that.

"I first made sure she was comfortable," Kim said. "I wanted her to recognize me as a friend, not a photographer. I know she would be anxious, and I didn't want to add to her anxiety."

Kim's connection to Rudd came quickly — it had to. Working under deadline, Kim only visited Rudd's family three times to make pictures. She was there the day Rudd picked out her dress, the night before the dance and the night of the dance. A fourth visit, for a formal interview, was done when photography had been completed.

With so few days to photograph, Kim emphasized the importance of her connection to Rudd and her family.

Kim also wondered, would the story do her family and her story justice?

"While I was shooting, I wasn't sure it would turn out well," Kim said.

But it did turn out well. The story, told in 10 pictures, documents Rudd's life leading into her prom night. It shows her joy, it shows her nerves and it shows the love of her family standing by her.

The story turned out so well that Kim included it in her portfolio entry for College Photographer of the Year, an international collegiate photography competition hosted by the Missouri School of Journalism. Every year, the winner of the portfolio category is awarded the title of 'College Photographer of the Year' and is offered a photojournalism internship with National Geographic.

Kim spent her years at MU watching CPOY, watching work scroll across a screen for hours while panels of judges vote an image "in" or "out." She said she always admired the work recognized and that while her pursuit has never been to win awards, her goal has always been to produce work at a high level.

"[Winning CPOY] gives me the lesson that when I hit the wall and I don't feel like I'm making a difference, I'm doing good work," Kim said.

Her story on Rudd was given an award of excellence from Pictures of the Year International in the 'Local News Picture Story' category. POY is another contest hosted by the Missouri School of Journalism, for professional photojournalists from around the world.

That competition is moderated by Lynden Steele, the director of photojournalism at the Missouri School of Journalism's Reynolds Journalism Institute. He recognized Kim's story and had encouraged her to enter it into the competition. He also emphasized how competitive the 'Local News Story' category is in the contest.

In short, Kim was in good company.

"It underscores just how good [her story] is," Steele said, pointing out that winning stories in that category tend to skew toward heavy subjects. Lurie's story was on a homeless child. Phelps' was on life inside a county prison.

"All subjects were really intense," Steele continued. "Then alongside that you've got Yehyun's story about a girl going to prom. It speaks to how good it was constructed as an edit of her work.

Steele's role in POY is that of a moderator and to keep the judges' conversation going for the competition's streaming audience. He does not act as a judge nor does he discuss his views of any story with judges before, during or after the competition.

"I feel like POY is so big, that it gives me more hope I can grow more," Kim said. "Whereas the award in CPOY made me feel like [the story] touched the judges."

Kim is still young in her photojournalism career. Having graduated from MU in December 2019, she's currently working as a photojournalist at the Connecticut Mirror through Report for America, a program that places journalists in newsrooms throughout the U.S. to report on under-covered issues and communities. While at the Mirror, Kim's work has focused on religion, immigration, criminal justice and family.

Her placement at the Mirror is the start of Kim's first full-time job as a photojournalist. The organization is a nonprofit newsroom, focusing on political coverage in Connecticut.

"It's an area I will commit to for at least a few years," Kim said.