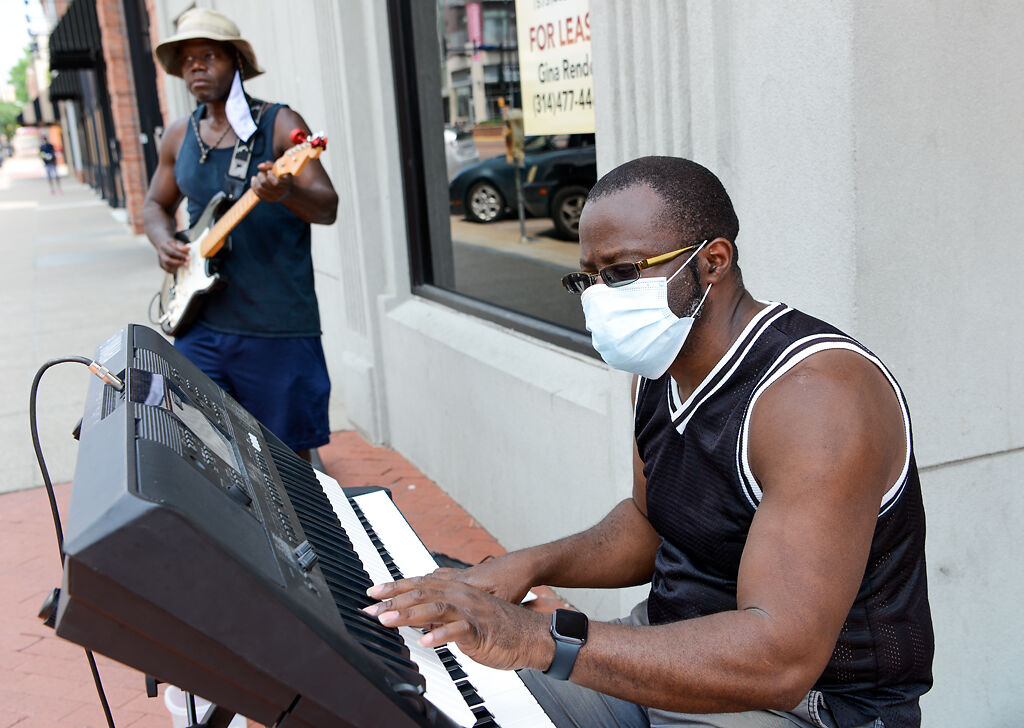 From left, brothers Mike Miller and Lionelle Miller busk July 4 on Broadway at Ninth Street. Known as the Band of Brothers, they have been playing downtown during the months of March through November nearly every weekend for six years. 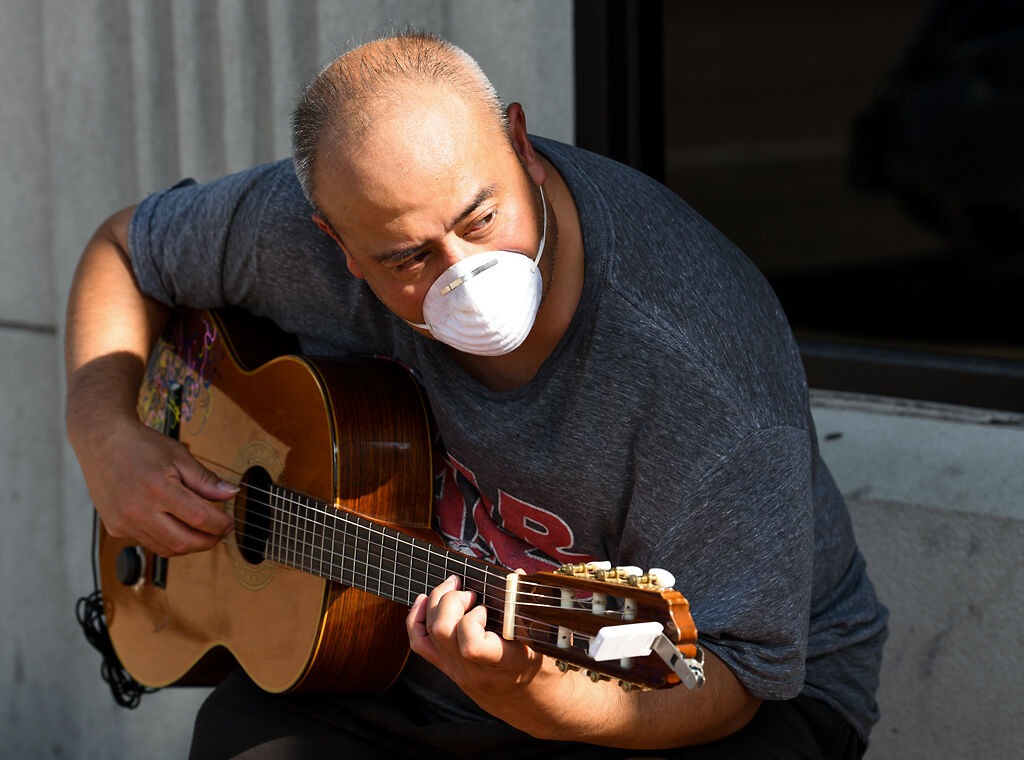 Mike del Rosario plays acoustic guitar July 12 in downtown Columbia. Del Rosario is the most frequent third member of the band, having played with Band of Brothers for about five years. 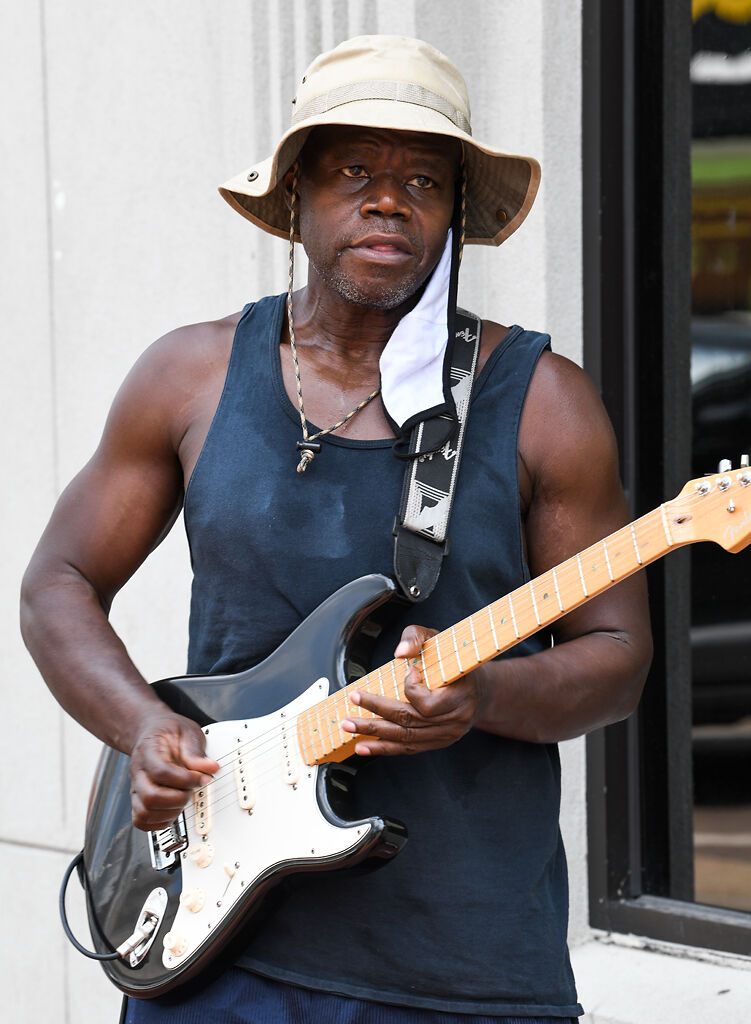 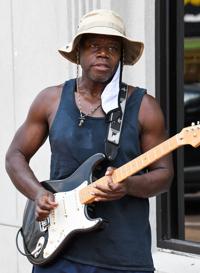 Mike Miller plays electric guitar with Band of Brothers on July 4 on Broadway at Ninth Street. Although Miller is typically out every weekend playing with the band, he has been staying home more often due to concerns about the COVID-19 pandemic. 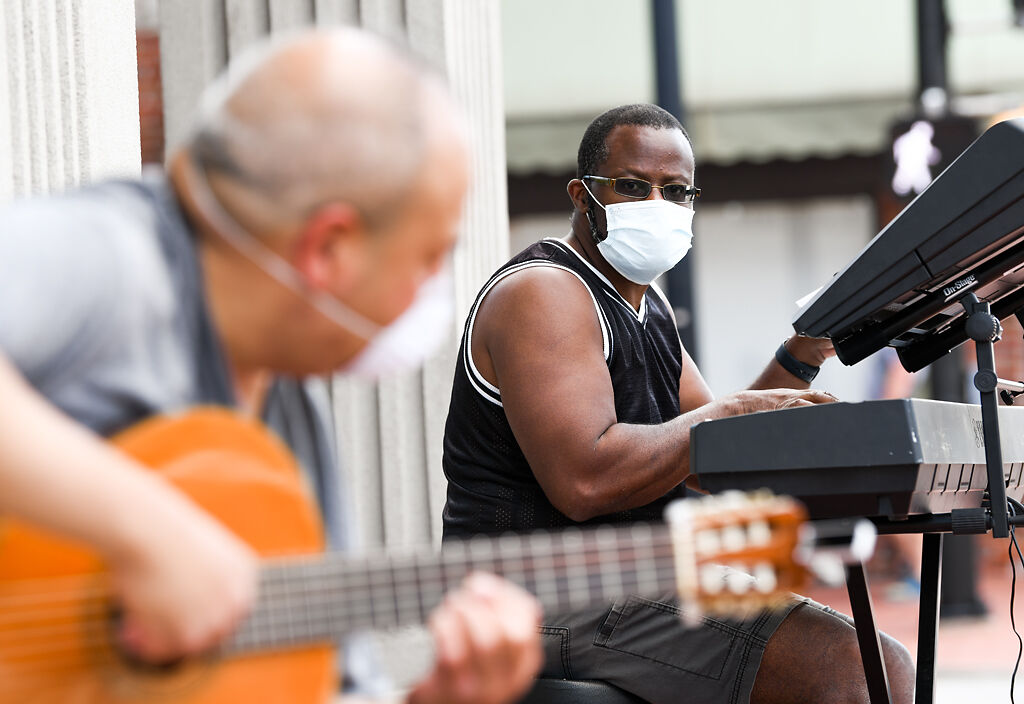 Mike del Rosario and Lionelle Miller play Edelweiss on July 12 in downtown Columbia. The Band of Brothers has a broad repertoire of music and play songs from a number of genres. “We play jazz, we play blues, we play country, we play Arabic, we play forties, thirties, sixties, nineties,” said Miller. “We play a little bit of everything.” 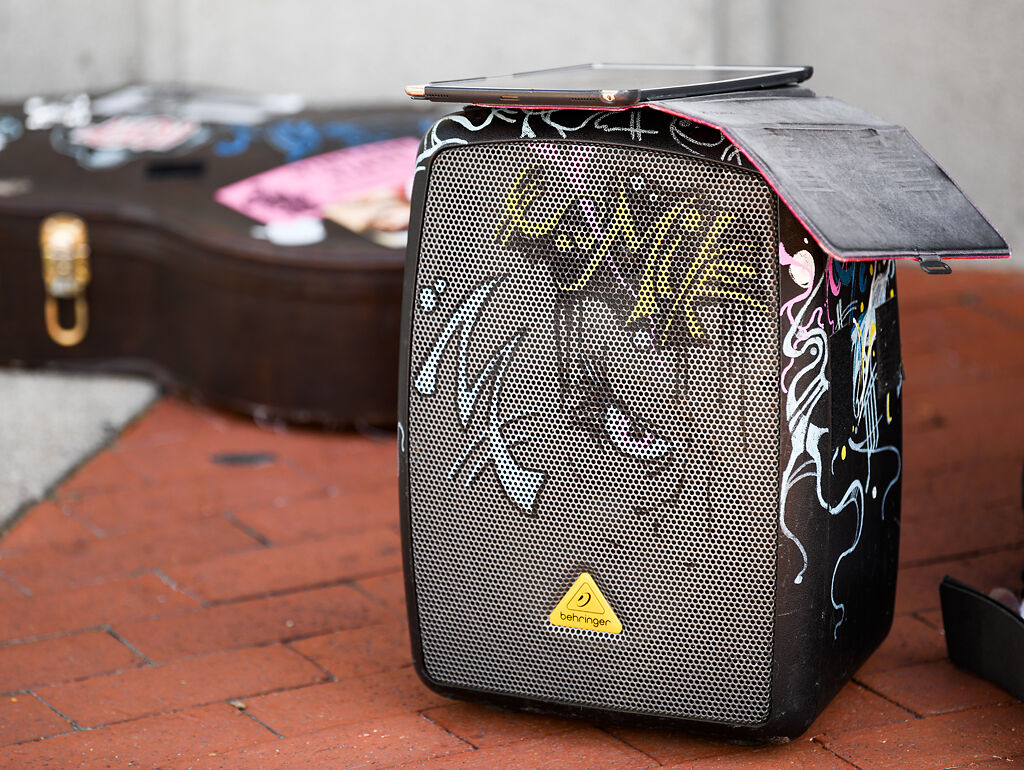 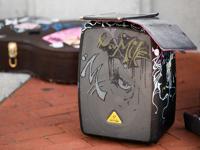 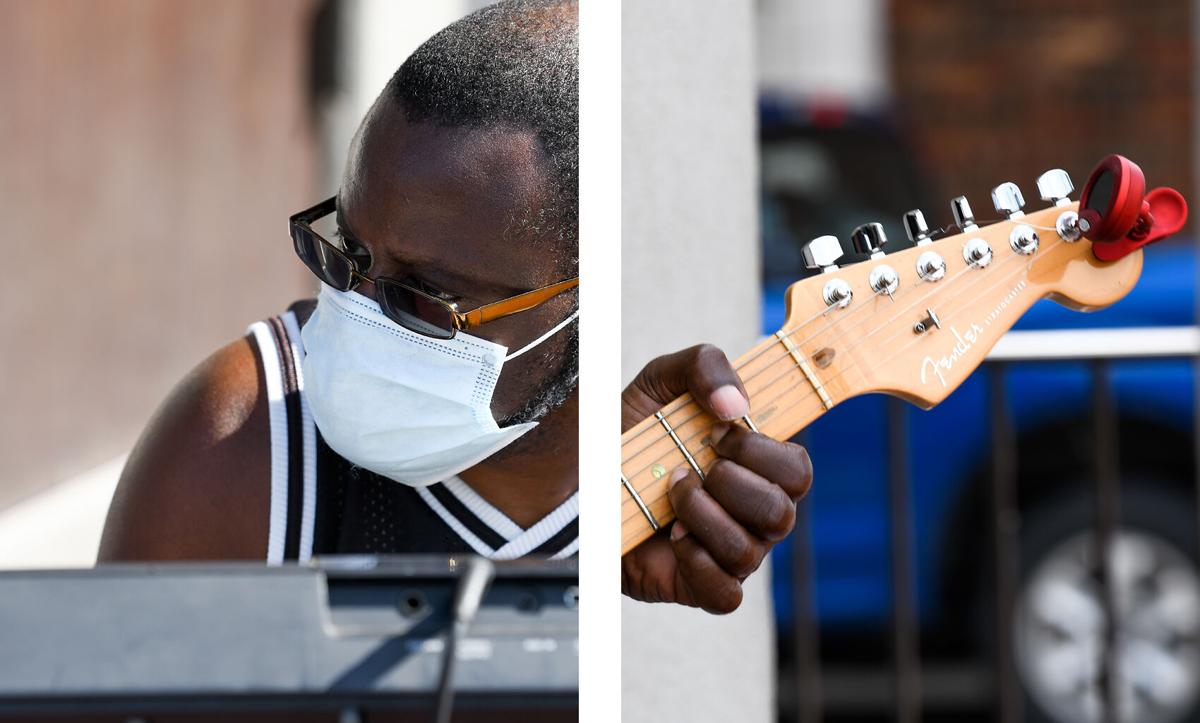 LEFT: Lionelle Miller plays his Yamaha electric keyboard July 12 on Broadway at Ninth Street. Miller has been playing for over 30 years and started the Band of Brothers busker band after observing other street musicians. “It looked like fun,” said Miller. “So the next weekend I grabbed my keyboard and went out and played.” Miller later asked his brother Mike to join him. RIGHT: Mike Miller plays his Fender Stratocaster electric guitar July 4 in downtown Columbia. Miller has been playing for over 30 years. “I like the Strat because it has a rich, 'bell-like' tone that really brightens up what I’m playing,” said Miller. “I’ve always loved that.” 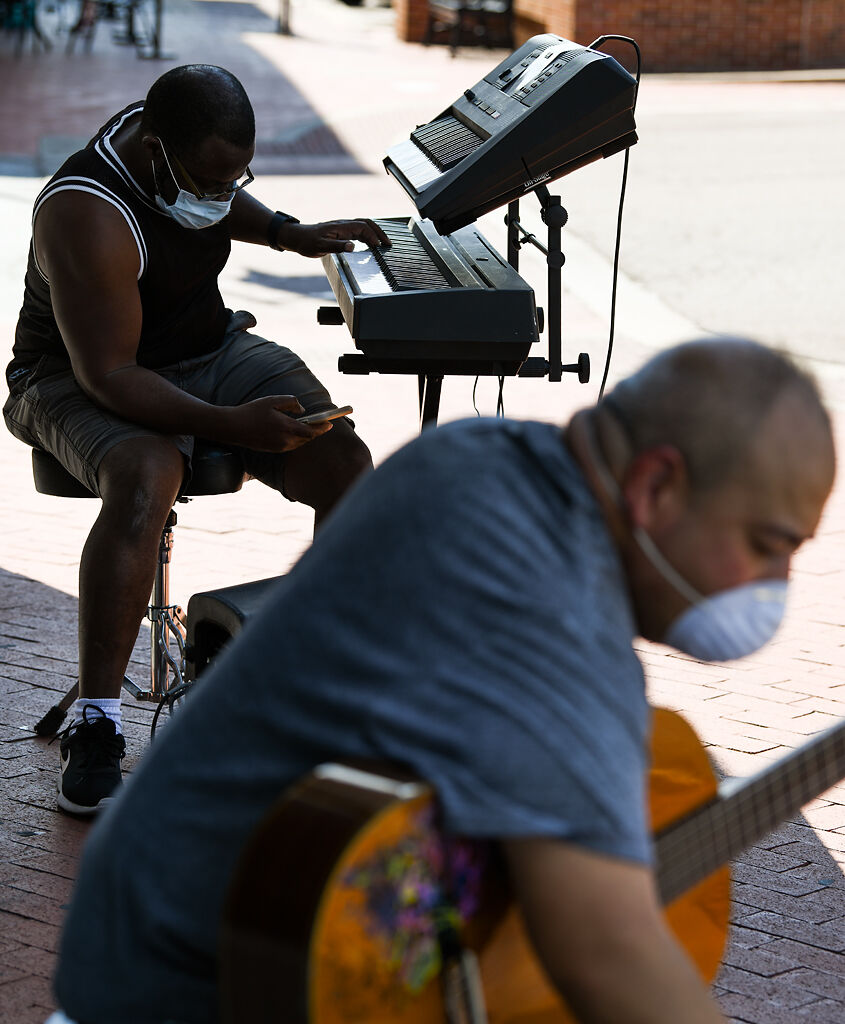 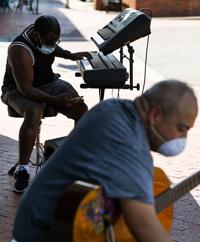 From left, Lionelle Miller and Mike del Rosario work out the chord changes for “Georgia on my Mind” on July 12 in downtown Columbia. 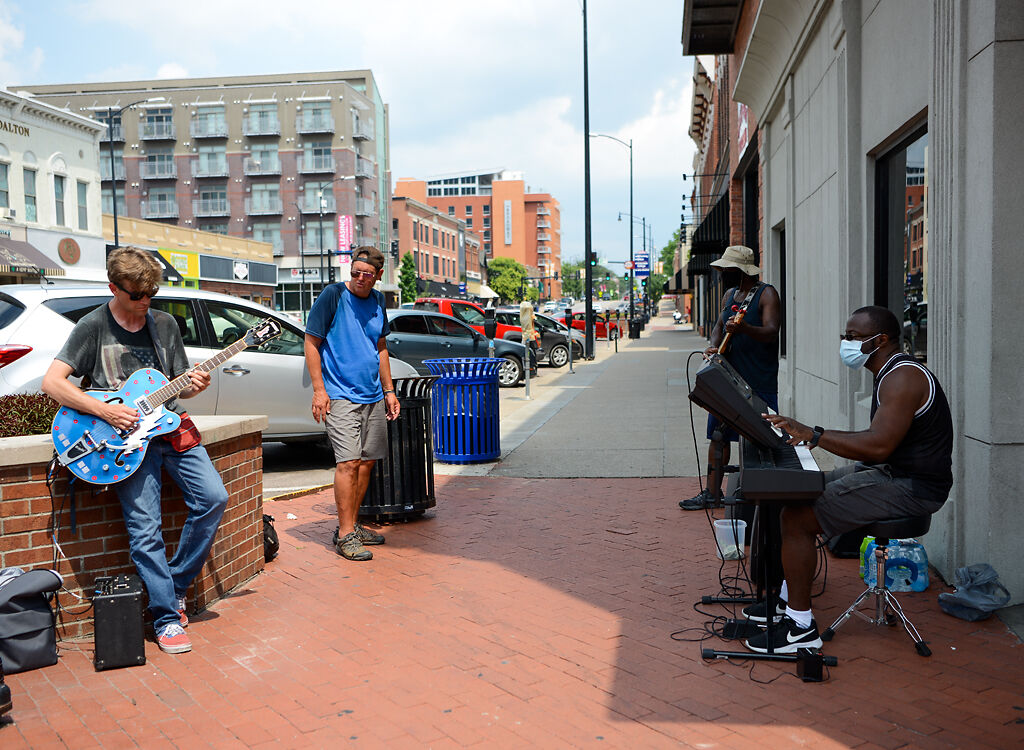 Joseph Hocking, left, plays with Mike and Lionelle Miller while fan Derric Dueker listens July 4 in downtown Columbia. Hocking is a busker in New York City visiting Columbia for about a month. He came out to busk and the Millers welcomed him to sit in with Band of Brothers.

If you have had the occasion to stroll down Broadway on any given Saturday in March through November, chances are you have heard the Band of Brothers. A busker band, with somewhat fluid membership, the core of the band is made up of brothers Lionelle and Mike Miller, and Mike del Rosario.

The Miller brothers got started after Lionelle saw some other people playing on the street. “It looked like a lot of fun, so one night I just grabbed my keyboard and came out and tried it. I had a blast. I’ve been hooked on it ever since," Miller said. Del Rosario joined them about a year later.

Remarkably, Lionelle Miller estimates that the band has played in downtown Columbia nearly every weekend for six years and has missed only six or seven weekends, not counting the period of tighter COVID-19 restrictions this spring. Their dedication has allowed them to build a loyal fan base. “We have people who regularly come by, who have been coming by to see us play for years,” said Miller.

“I think with all of the craziness going on, especially now, it kind of takes them away from everything that’s going on in their lives,” he said. “It’s just a time to sort of enjoy music or hear their favorite song. It’s a time to get away.”

Mike and Lionelle have both been playing music for about 30 years and are multi-instrumentalists. Lionelle plays keyboard when busking, but also plays guitar, violin, viola, cello, bass and the drums.

Mike Miller plays electric guitar and sings for Band of Brothers, but can also play piano, bass, violin, harmonica and the drums. Del Rosario plays acoustic guitar. While this trio represents the typical makeup of the band, Lionelle Miller says they regularly welcome “brothers from other mothers and sisters from other misters.”

Originally from St. Louis, the Miller brothers moved to Columbia with their mother in 1985. Mike has a degree in theater from MU. Lionelle has been in the information technology field for about 30 years and currently works for MU. Del Rosario, who works as a med tech, also came to Columbia from St. Louis.