You are the owner of this article.
Edit Article Add New Article
You have permission to edit this article.
Edit
Home
COVID-19
News
Sports
Opinion
Obituaries
Vox
Visuals
Special Sections
Classifieds
Subscribe
1 of 19 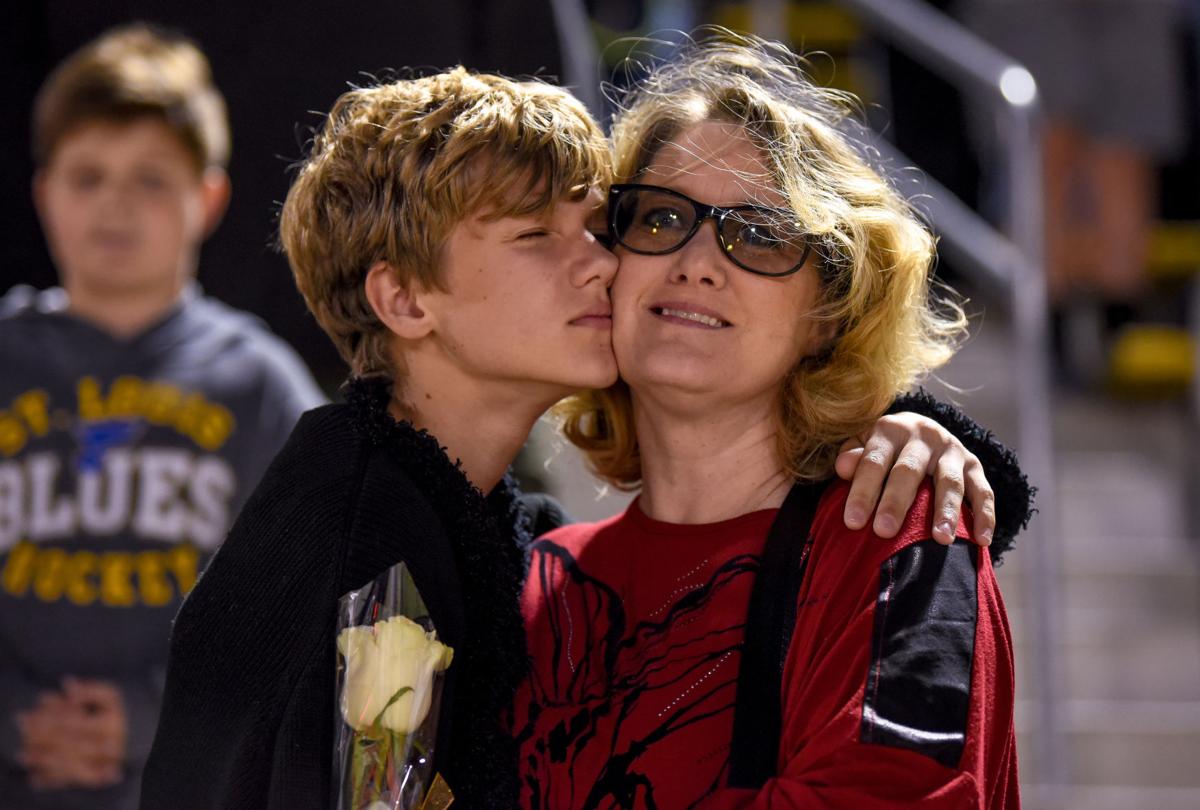 Jack Ewers, 13, leans on his mother Tam Ewers during a prayer before Rock Bridge High School plays at Helias Catholic High School on Friday in Jefferson City Friday. They came to see his brother play in the band for senior night. 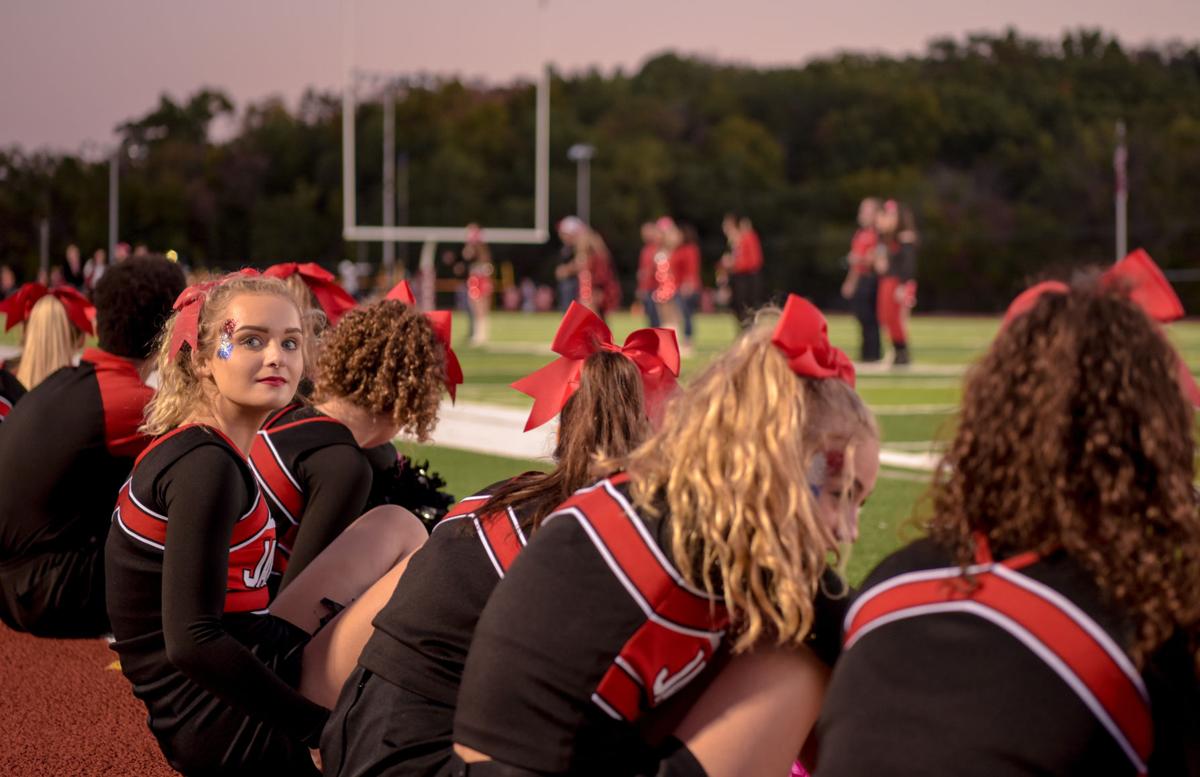 Jefferson City High School cheerleader Madilyn Quigley, 16, turns around to look at the stands on Friday at home. It was senior day for the Jays and seniors from the football team, band and dance teams were honored on the field. 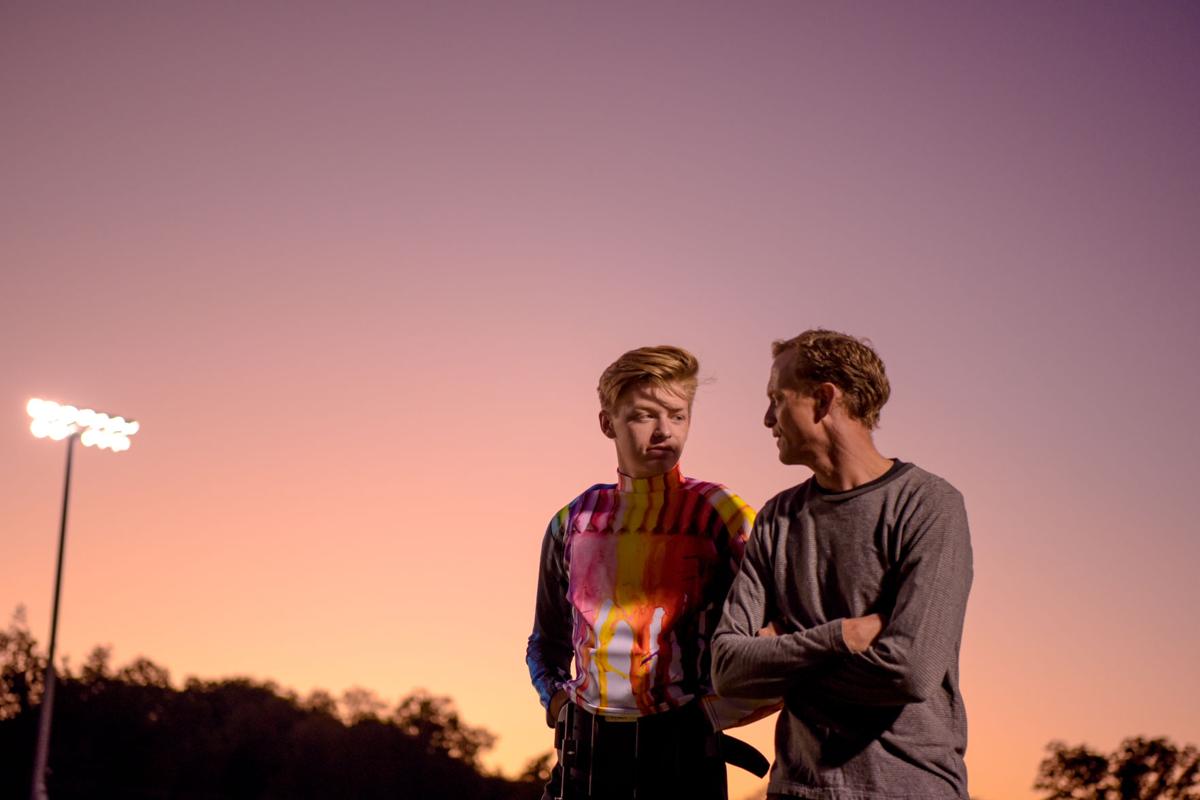 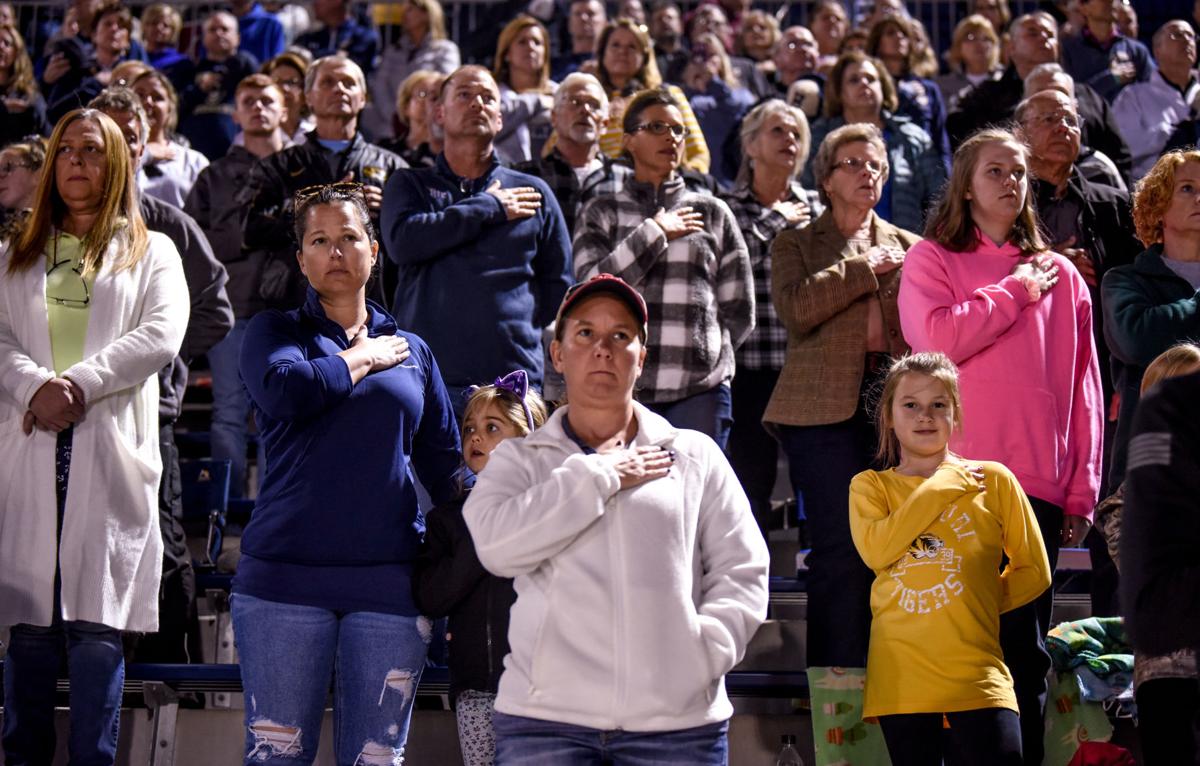 Game attendees place their hands over their hearts for the pledge of allegiance before Rock Bridge High School plays at Helias Catholic High School on Friday in Jefferson City. The game raised money for breast cancer awareness month. 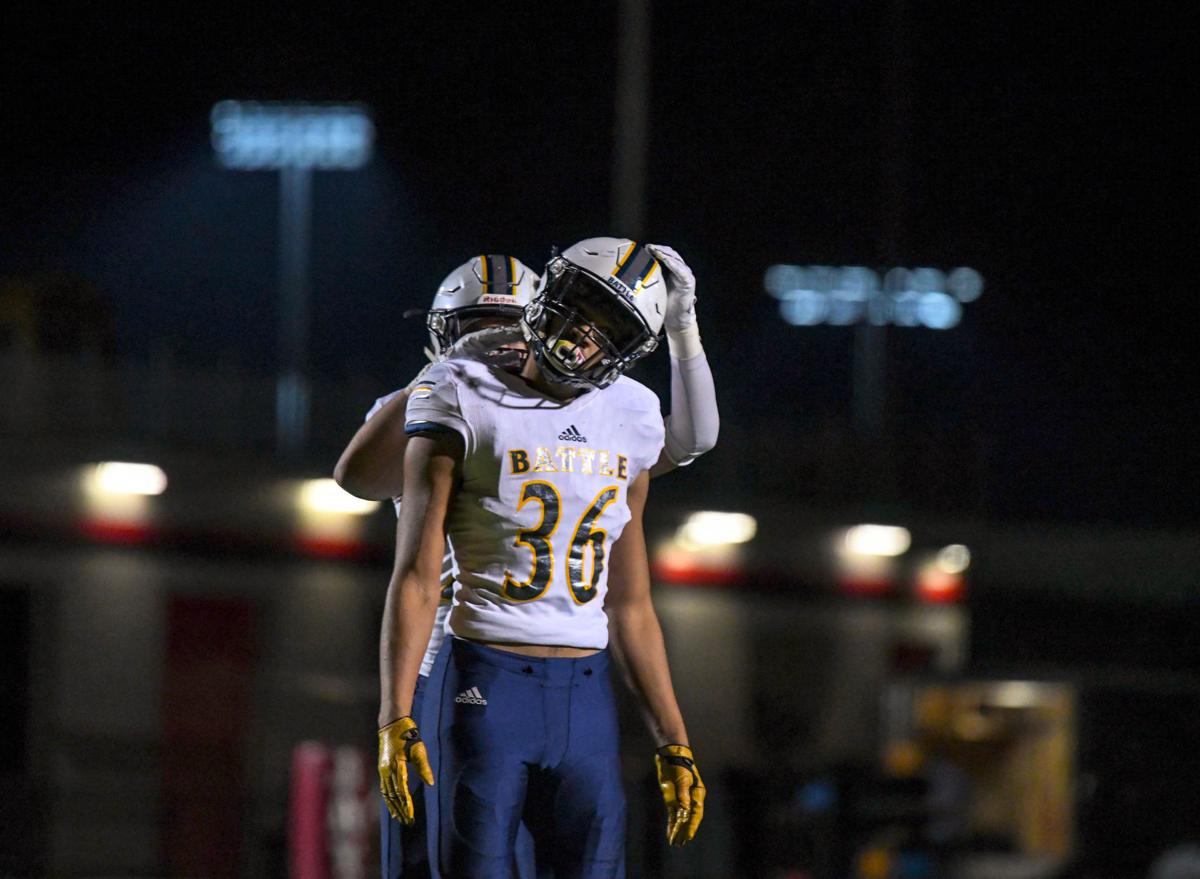 Battle outside running backer Nick Williams helps Elijah Owens stretch his neck as the game starts on Friday. Battle won the away game against Jefferson City High School by 54 - 35. 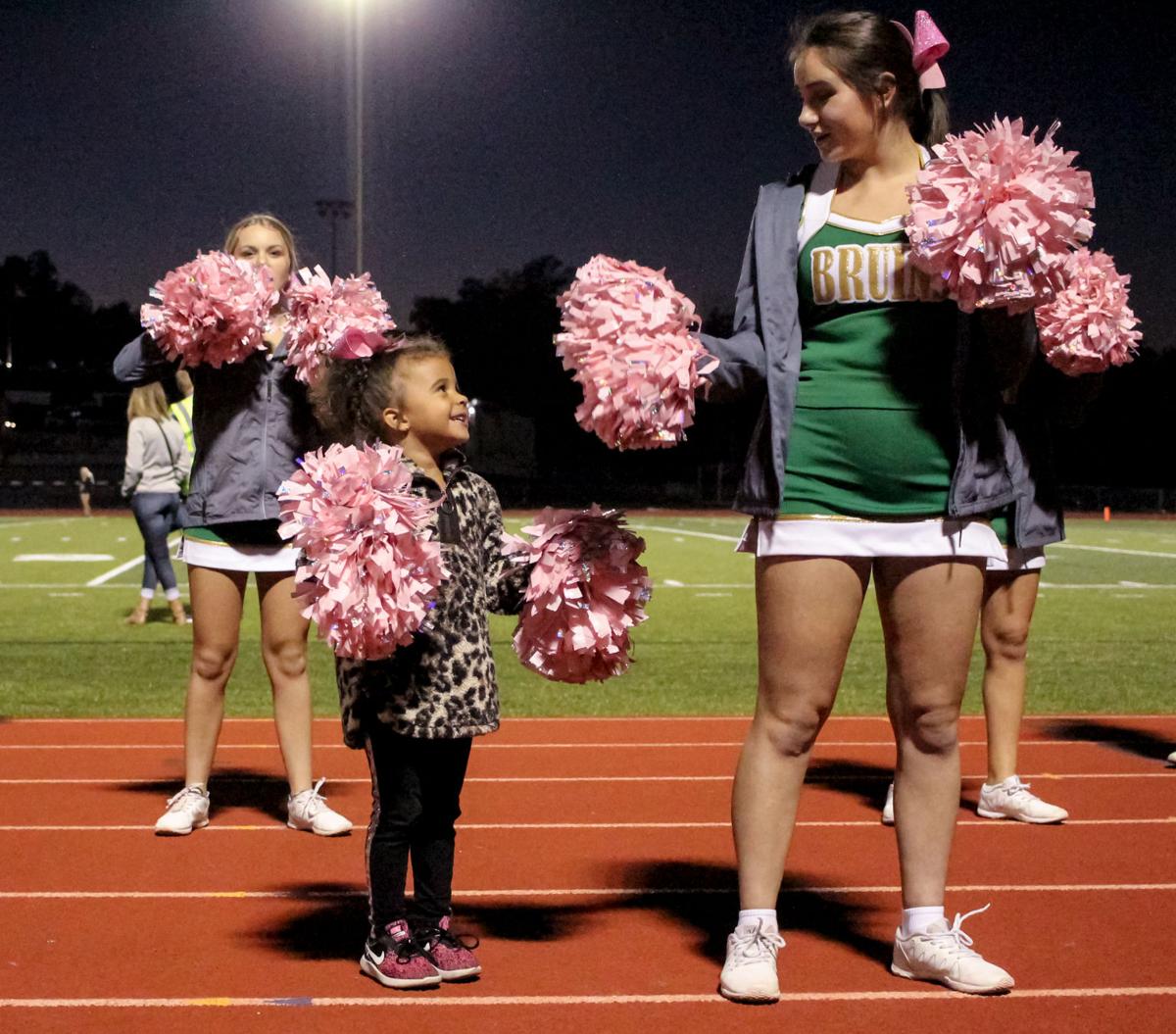 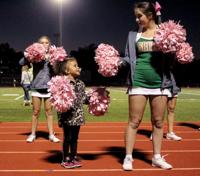 Makayla Manuel cheers on the Rock Bridge Bruins at Helias Catholic High School on Friday in Jefferson City. She supports her older brother, free safety and wide receiver, Tre Manuel for the third year in a row. 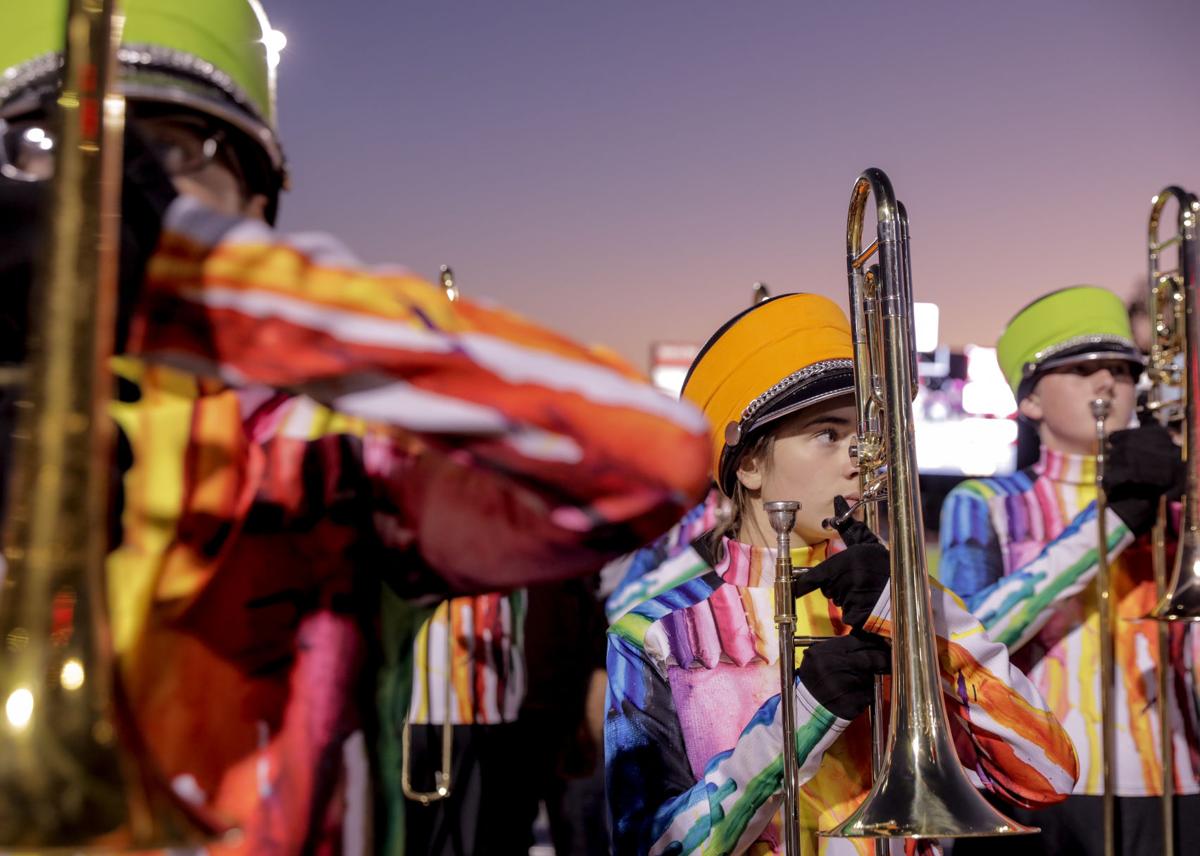 Lydia Schoonover holds up a trombone before the performance as the game starts on Friday against Battle High School. Schoonover said getting to travel for the competitions is her favorite part about being in the marching band. 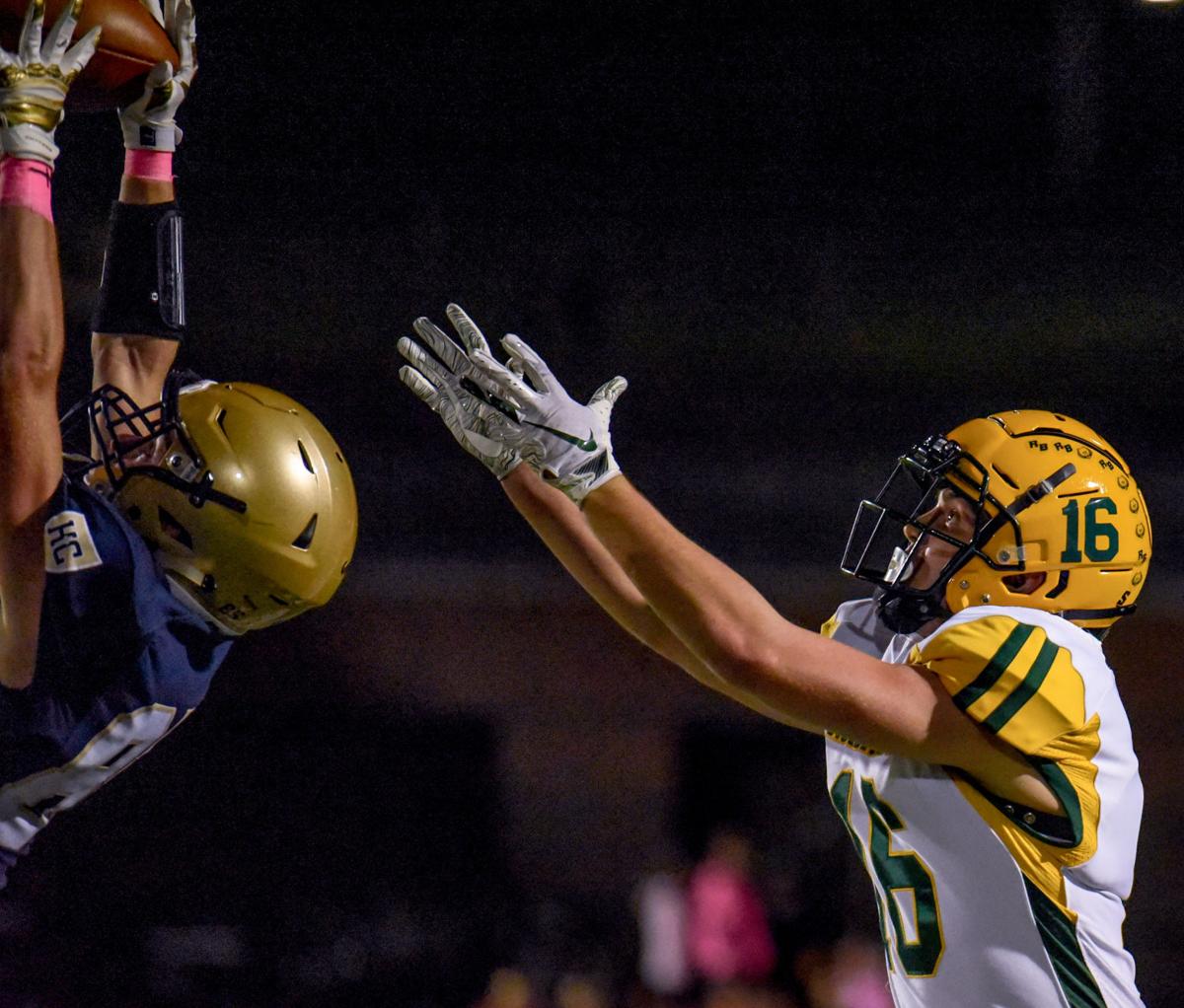 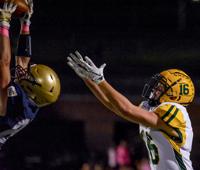 Helias' defensive back Griffen Bushjost intercepts a pass intended for Brant Bowers on Friday in Jefferson City. The interception happened in the second half of the game. 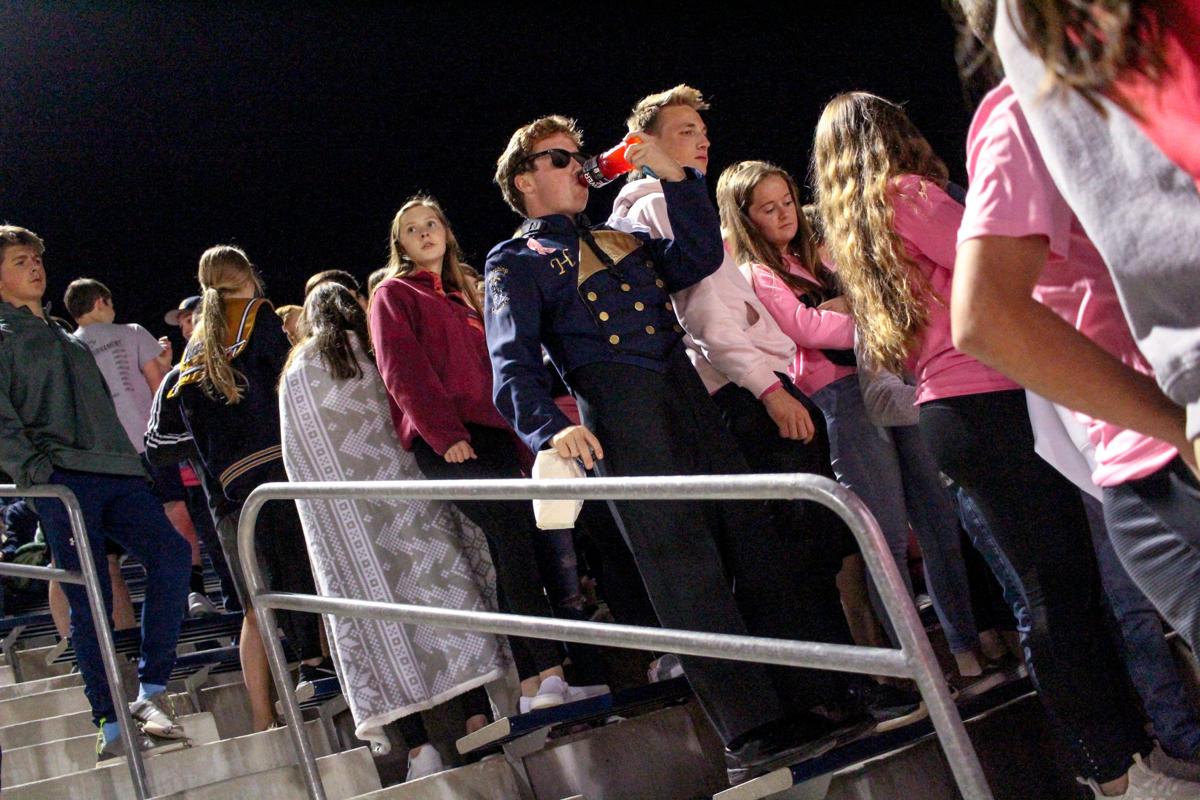 Andrew McDonald, a Helias Catholic High School senior, chugs his Powerade in the fan section on Friday in Jefferson City. McDonald has participated in the band for four years. 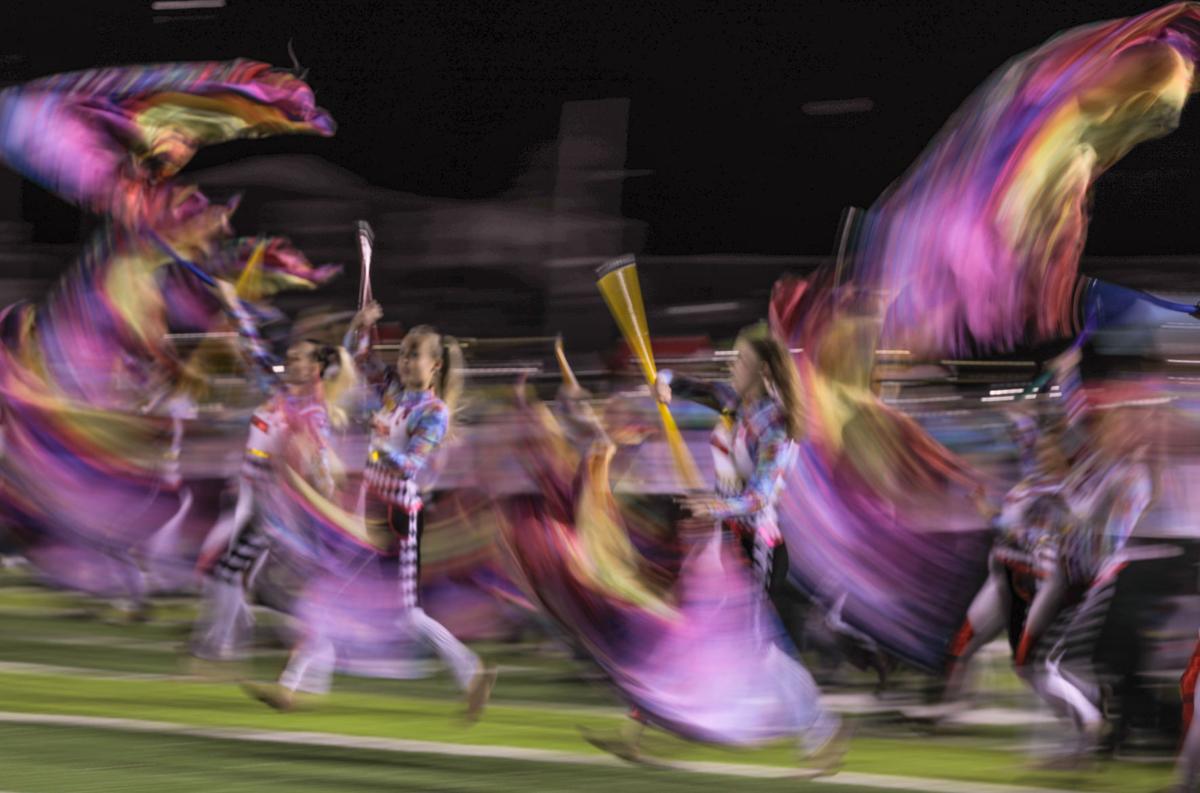 In this in-camera long exposure, Jefferson City High School color guard performs during half time on Friday. "Outside the box" was the color guards' show that runs from June to October. "It's a really fun bouncy show," one of the members Ash Stickann said. 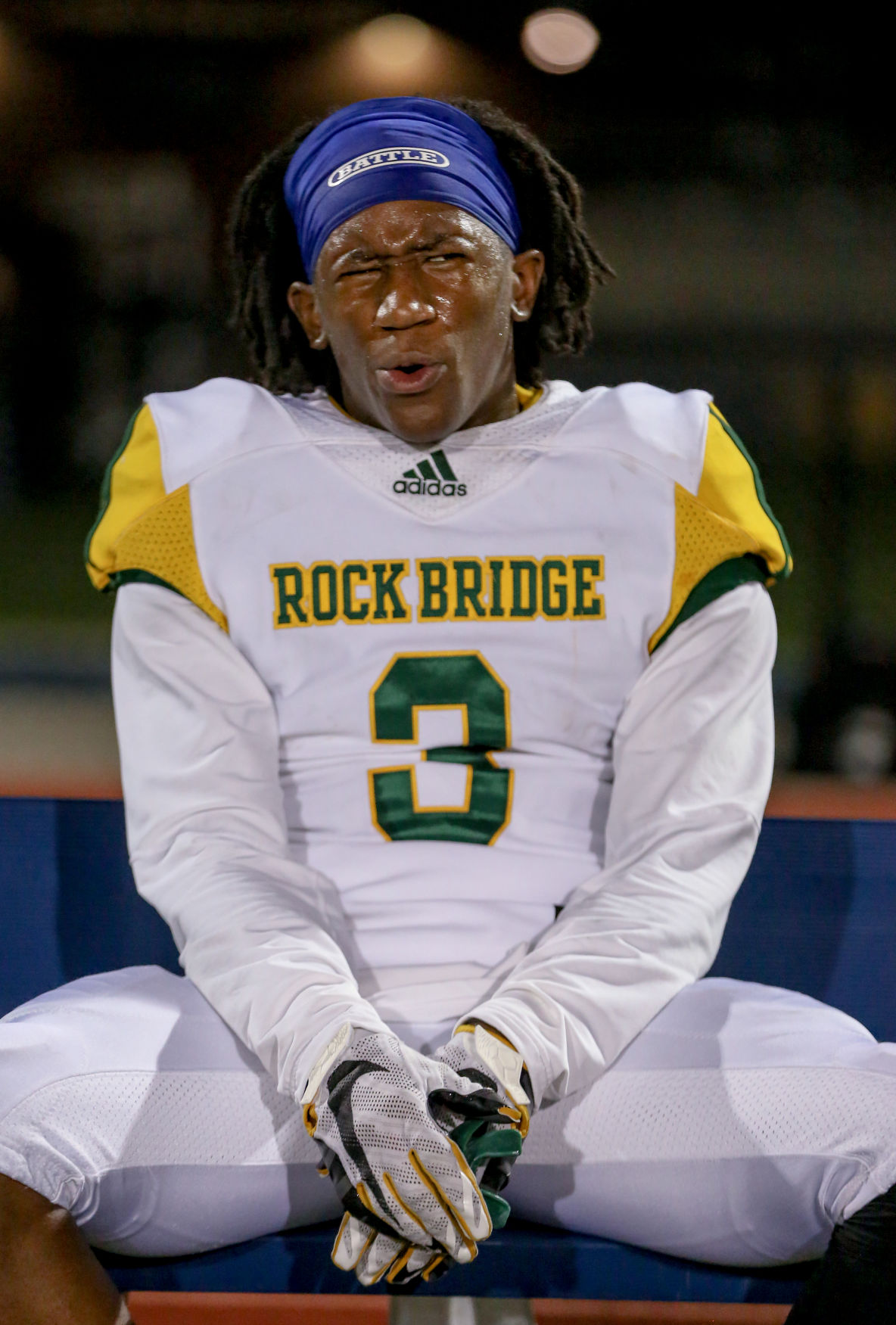 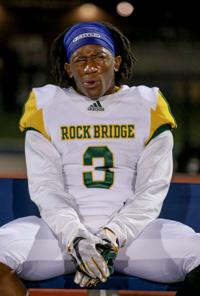 Rock Bridge free safety Tre Manuel reacts to an on-field injury on Friday at Helias Catholic High School in Jefferson City. The player who was injured on the play walked off the field without assistance. 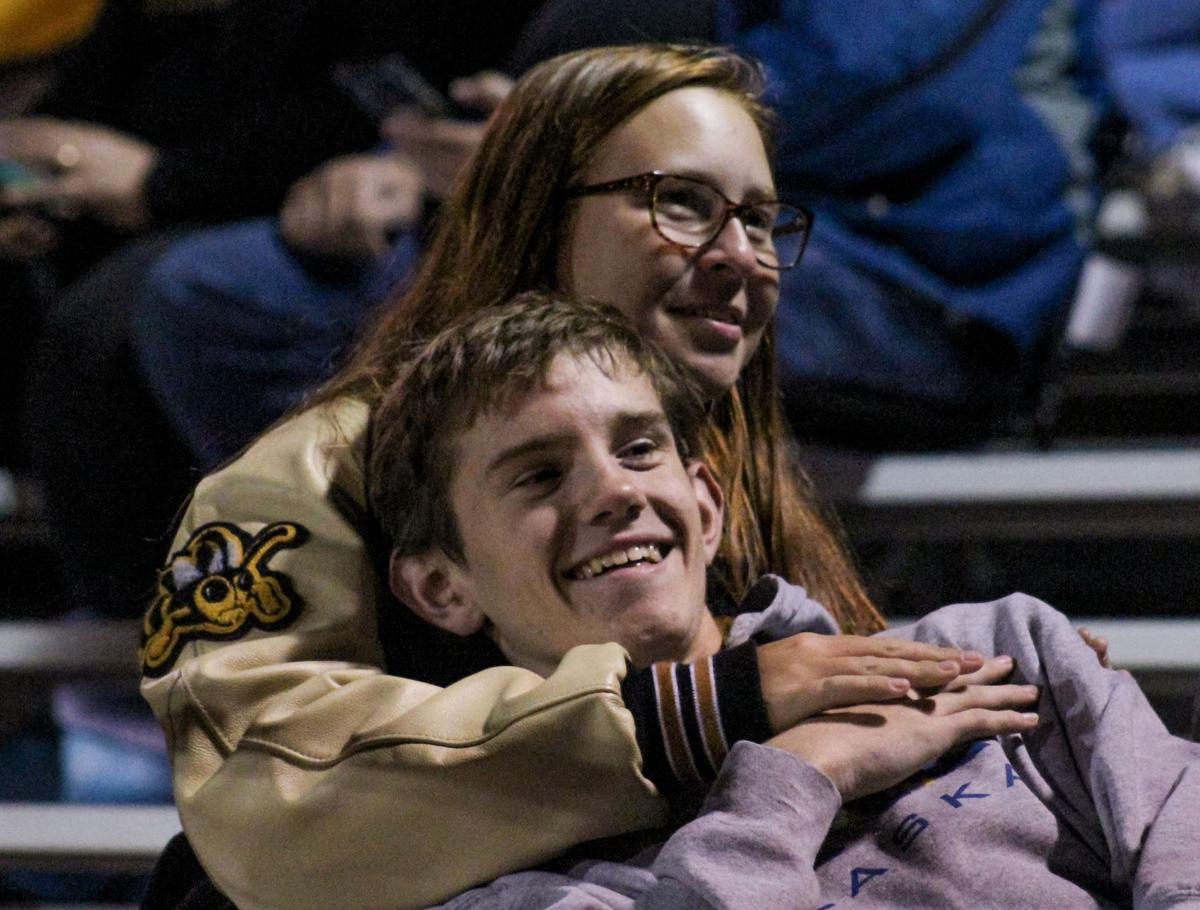 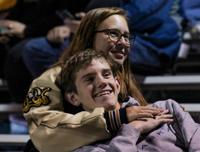 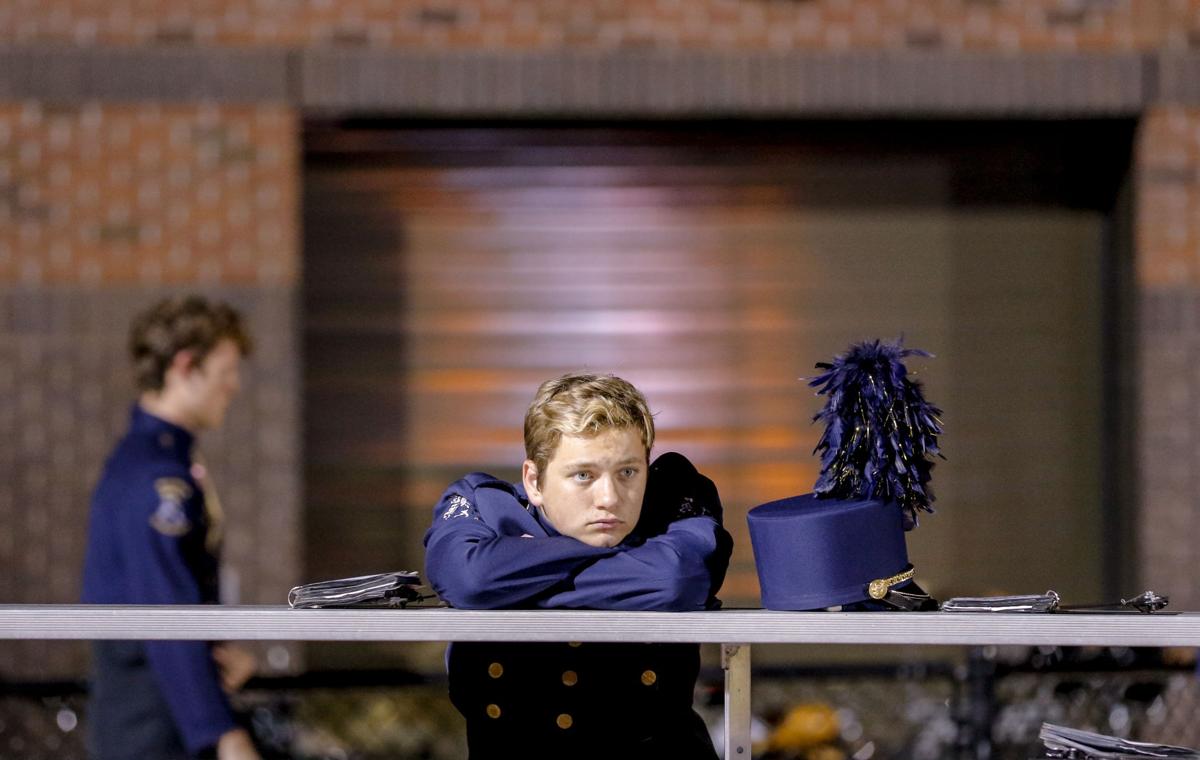 Helias freshman Will Huhman watches the Crusaders kick off the second half against the Rock Bridge Bruins on Friday at Helias High School in Jefferson City. Huhman played saxophone for the marching band until this summer, when he switched to playing the mellophone. 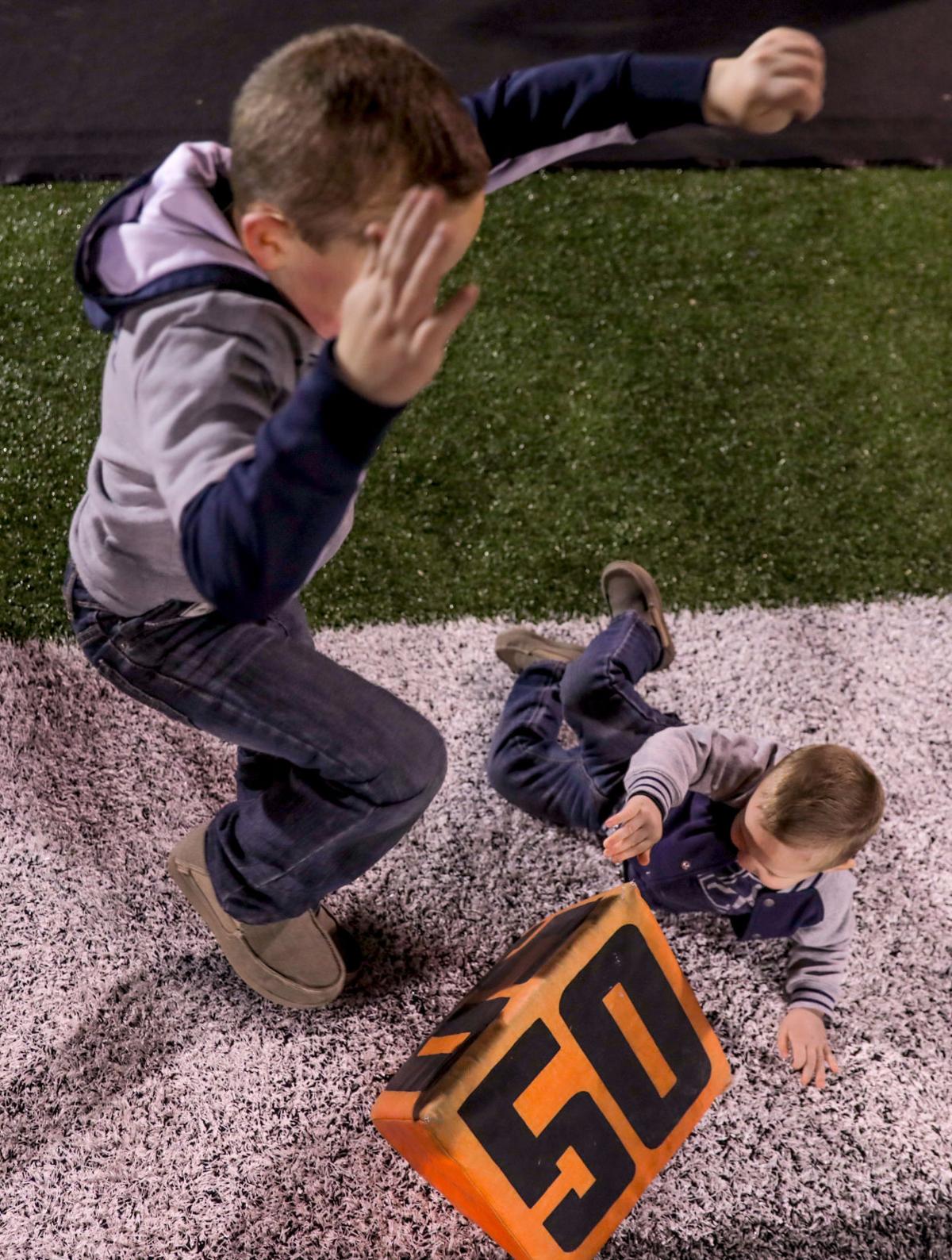 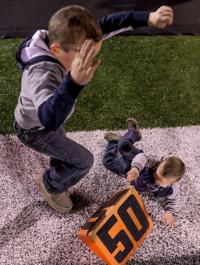 Eston Keller, 6, and Hudson Keller, 2, play with a cushion to mark lines after the game on Friday. Their older brother, Harrison Keller, is a quarterback at Battle. "They like snacks more than they like the game. But they are here to support," their dad Bill Keller said. 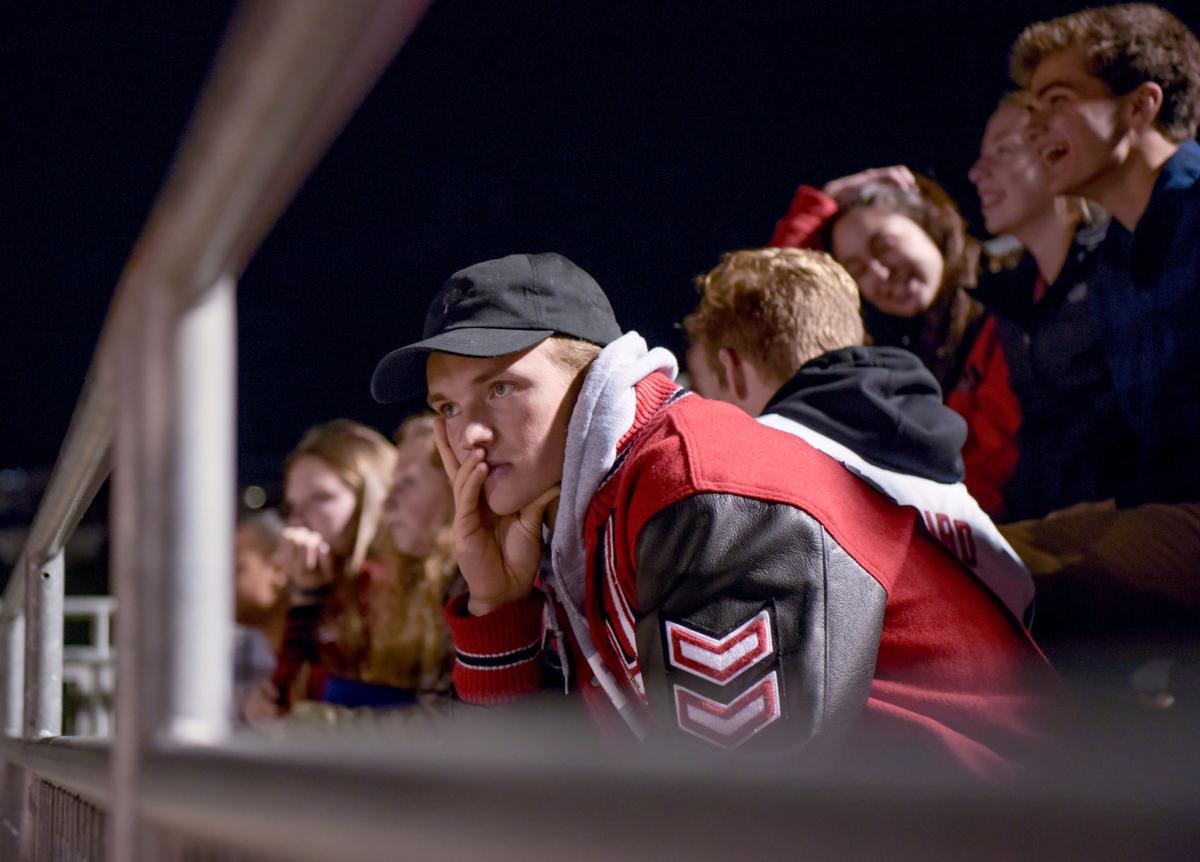 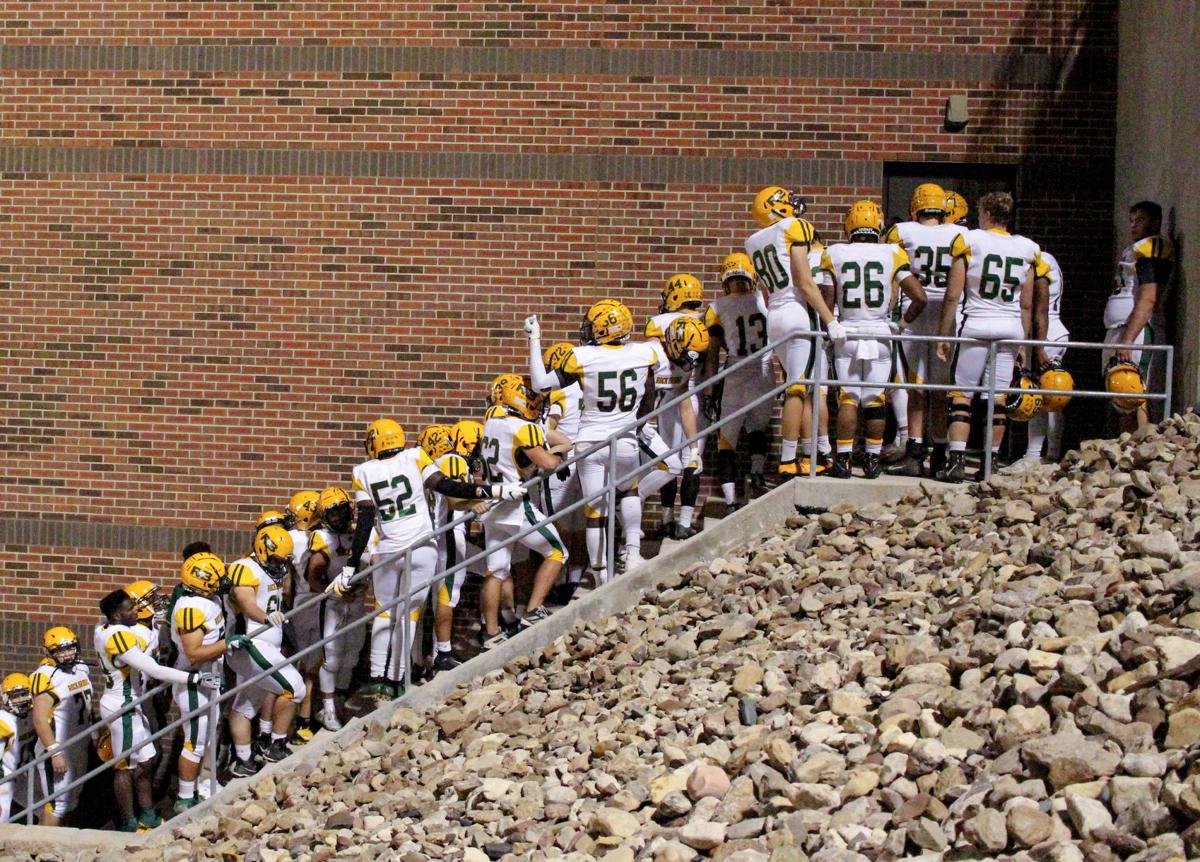 The Rockbridge Bruins climb the stairs to the locker room at Helias Catholic High School on Friday. 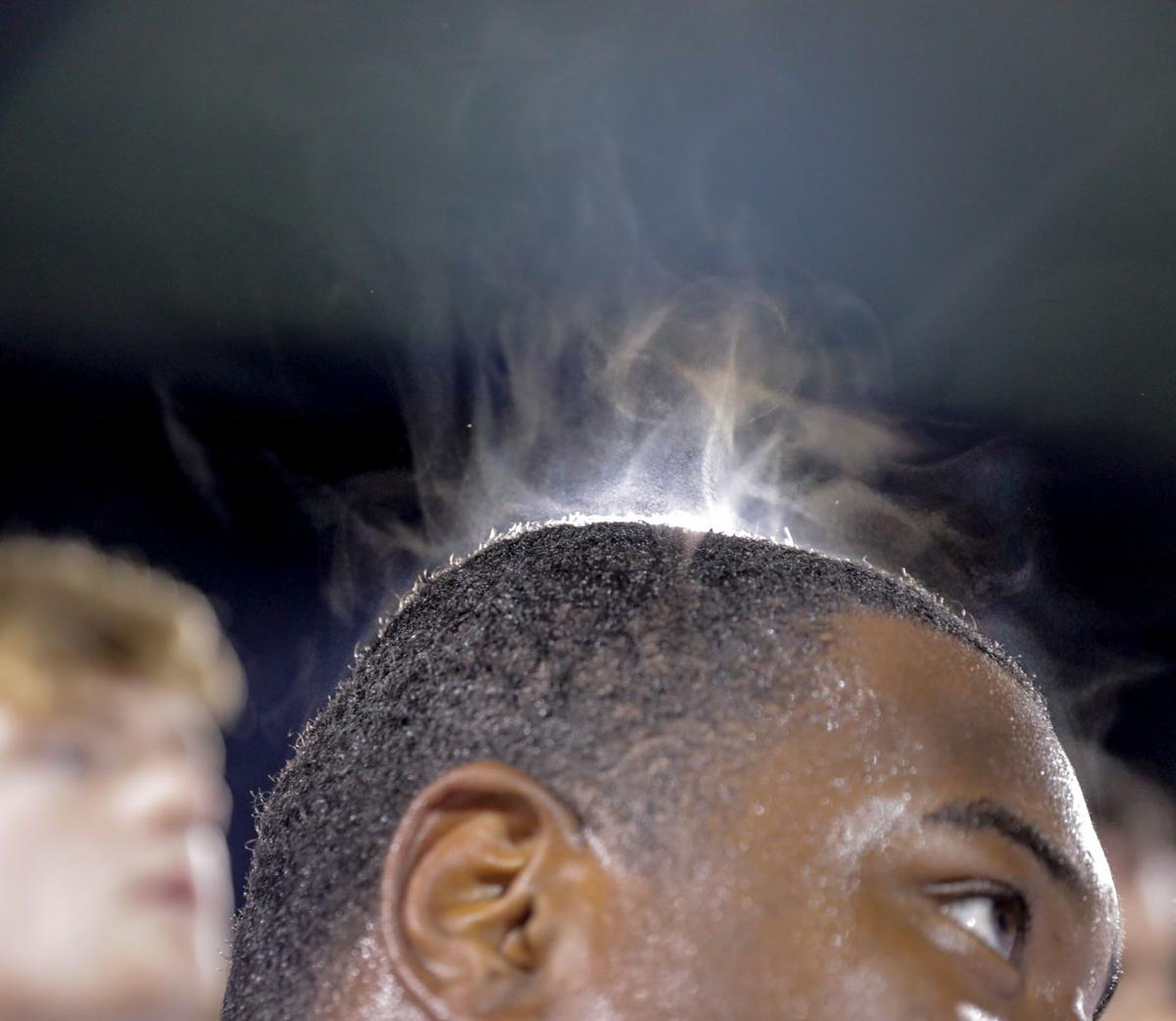 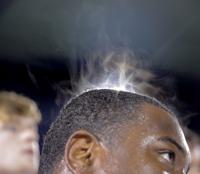 Steam rises from Battle Jaylon Perkins after the away game against Jefferson City High School on Friday. 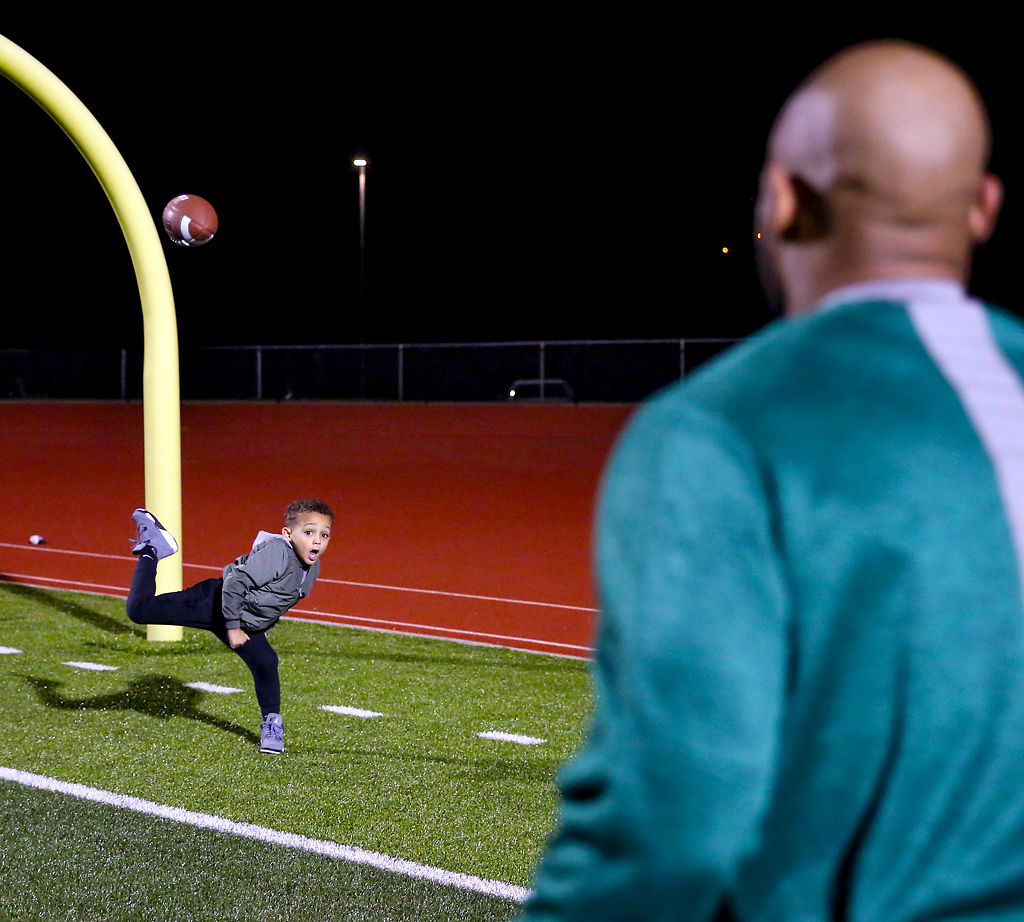 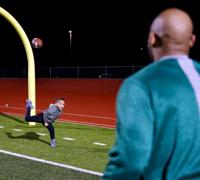 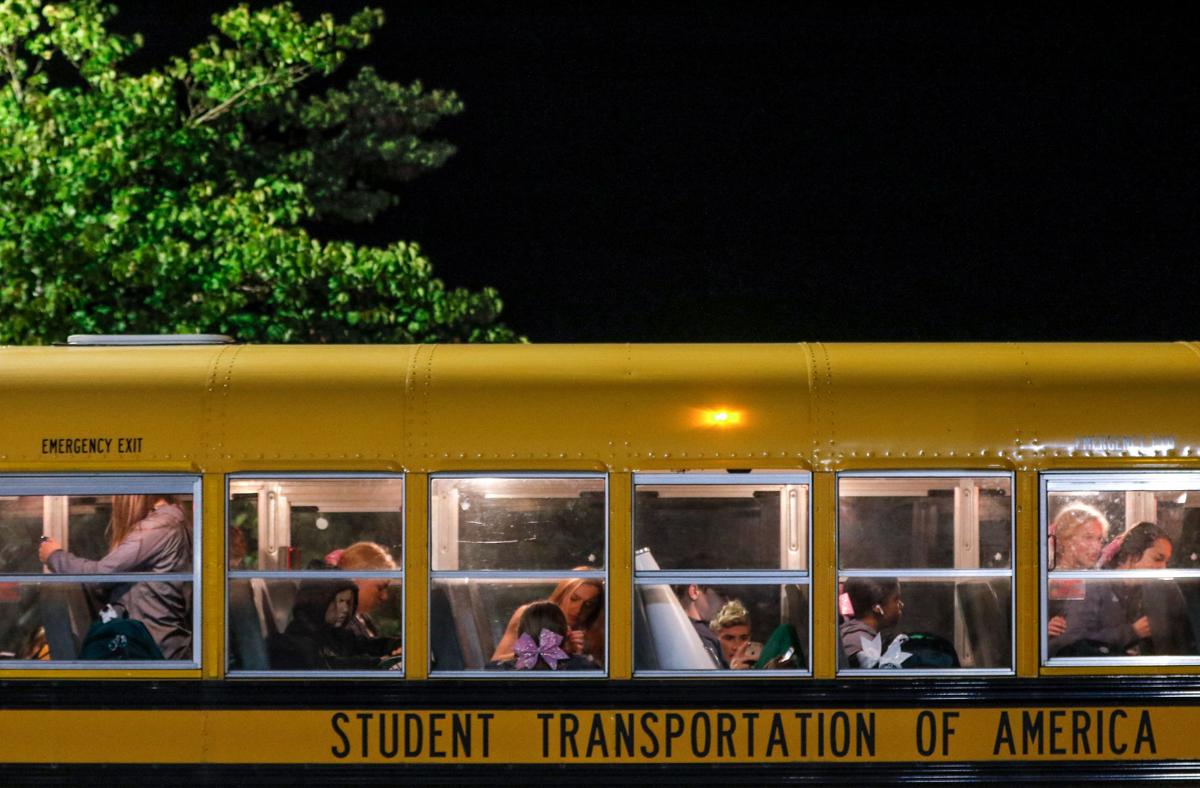 Rock Bridge’s cheer team settles into the bus back to Columbia after a loss to Helias on Friday. Rock Bridge will hit the road again next week to face Francis Howell High School.

HOLD TIGHT UNTIL THE END

Just before the Rock Bridge versus Helias Catholic game began, 13-year-old Jack Ewers wrapped his arms around his mother in preparation to pray. Leaning in closer, his mother Tam Ewers grinned. The two, holding tightly until the end of the prayer, came to support an older brother — a senior in the band. Battle, Rock Bridge and Fulton boarded buses and took a trip away from home. Returning to Columbia with a lone Spartan win and Hornet, Bruin losses, our visual journalists present 'Friday Night Sights' — the magic and wonder of Friday night football.

Football is more than simply the action on the field. While everyone else stares at the big green box, eyes fixed under bright lights, we look the other way; at the relationships, reactions, moments and memories unfolding in the sidelines. Follow along each week as our visual journalists present 'Friday Night Sights' — the magic and wonder of Friday night football.