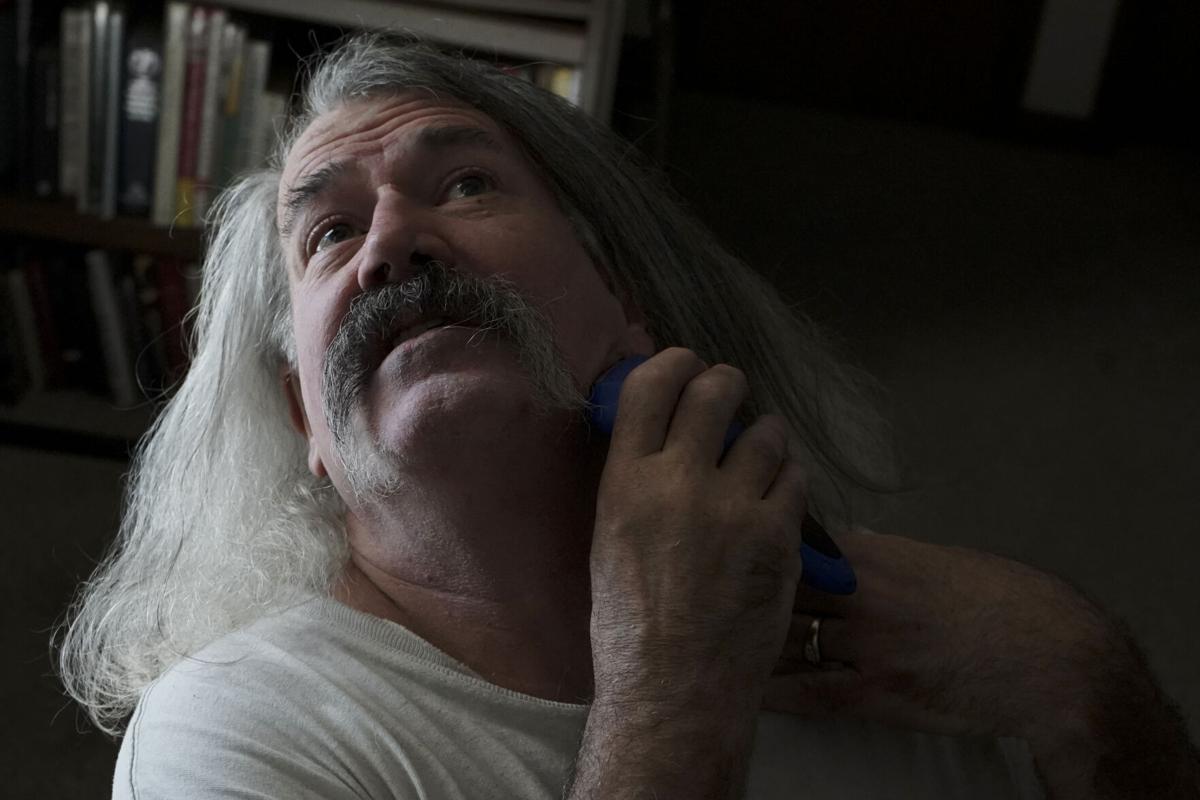 After checking messages on Facebook, Robert Morrison trims his facial hair at before leaving his home to collect food donations. Morrison, who doesn’t have a cellphone, uses the social media website on his desktop computer to communicate. 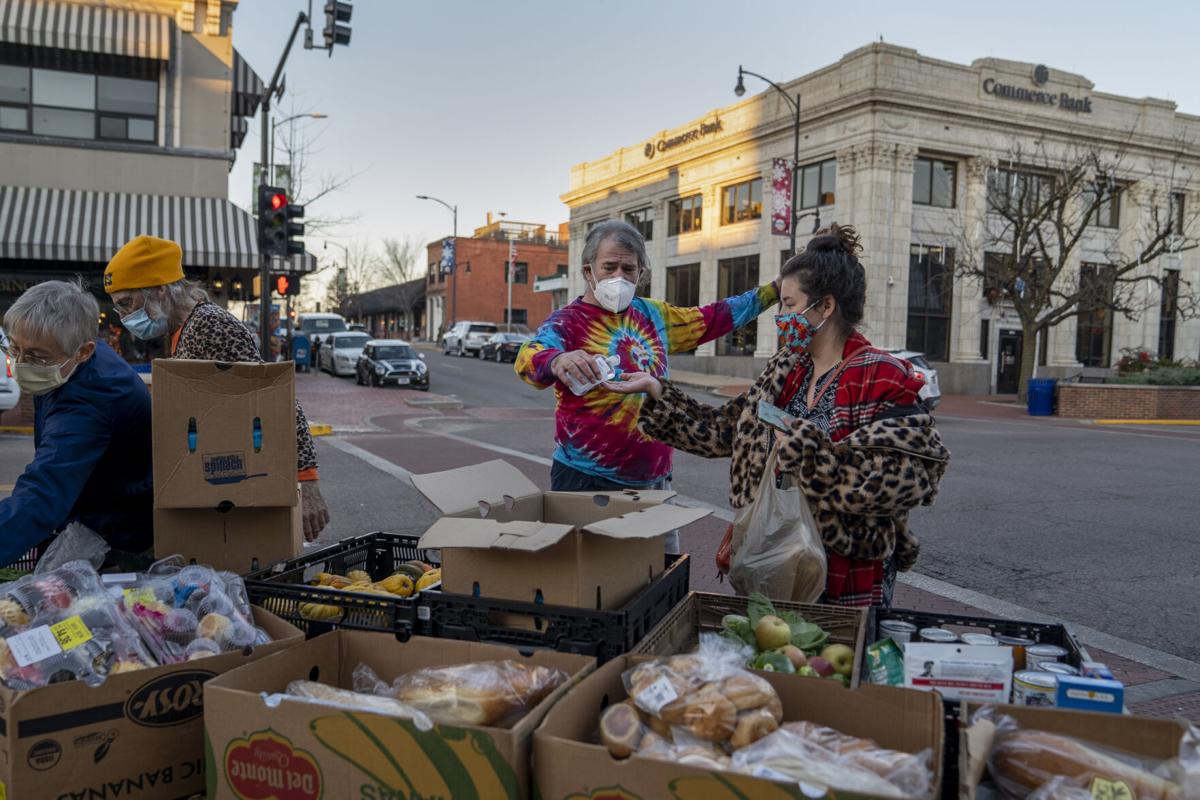 As customers peruse, Robert Morrison, center, gives hand sanitizer to a woman who came to pick up food. Morrison provides the sanitizer to customers before they can handle the food. "I need to protect myself and others if we still want to run Food Not Bombs every Saturday at this crazy time," he said. 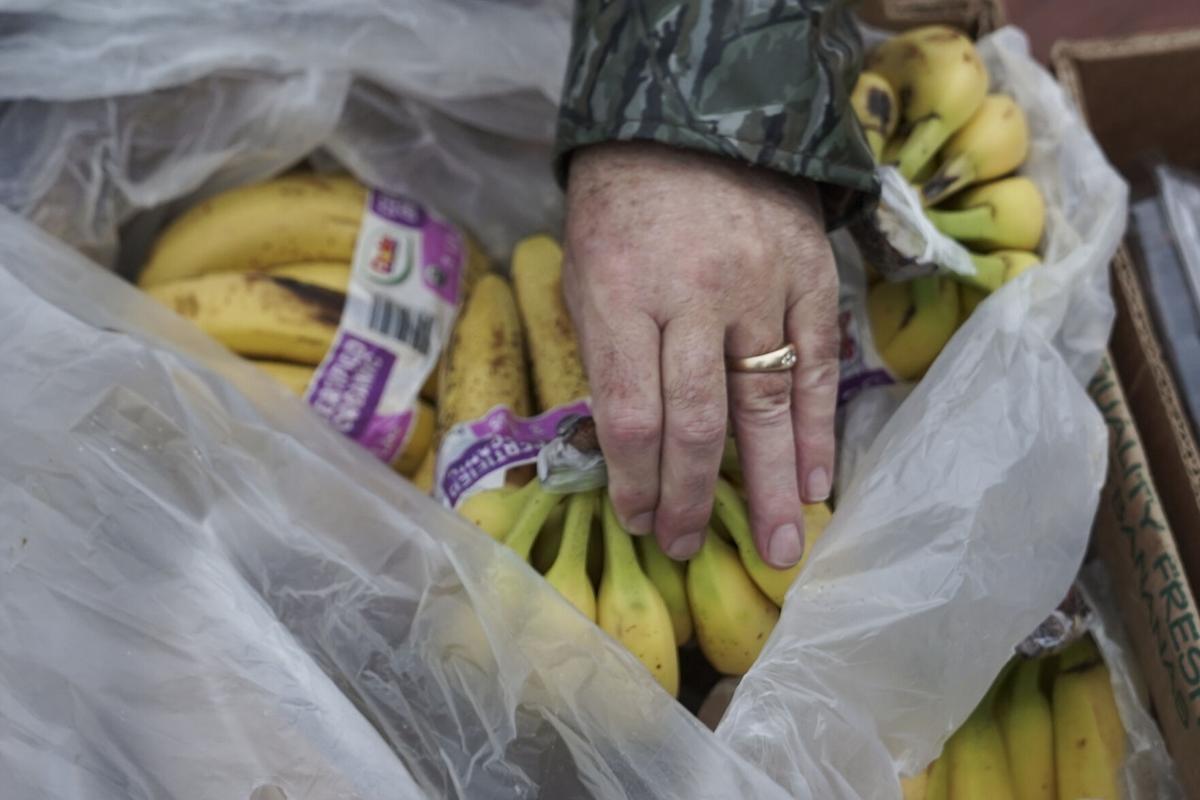 Robert Morrison picks up a bunch of bananas for a customer. Morrison says his late wife is one vital reason that he keeps doing what he is doing. "I can feel she's here with me," he said. 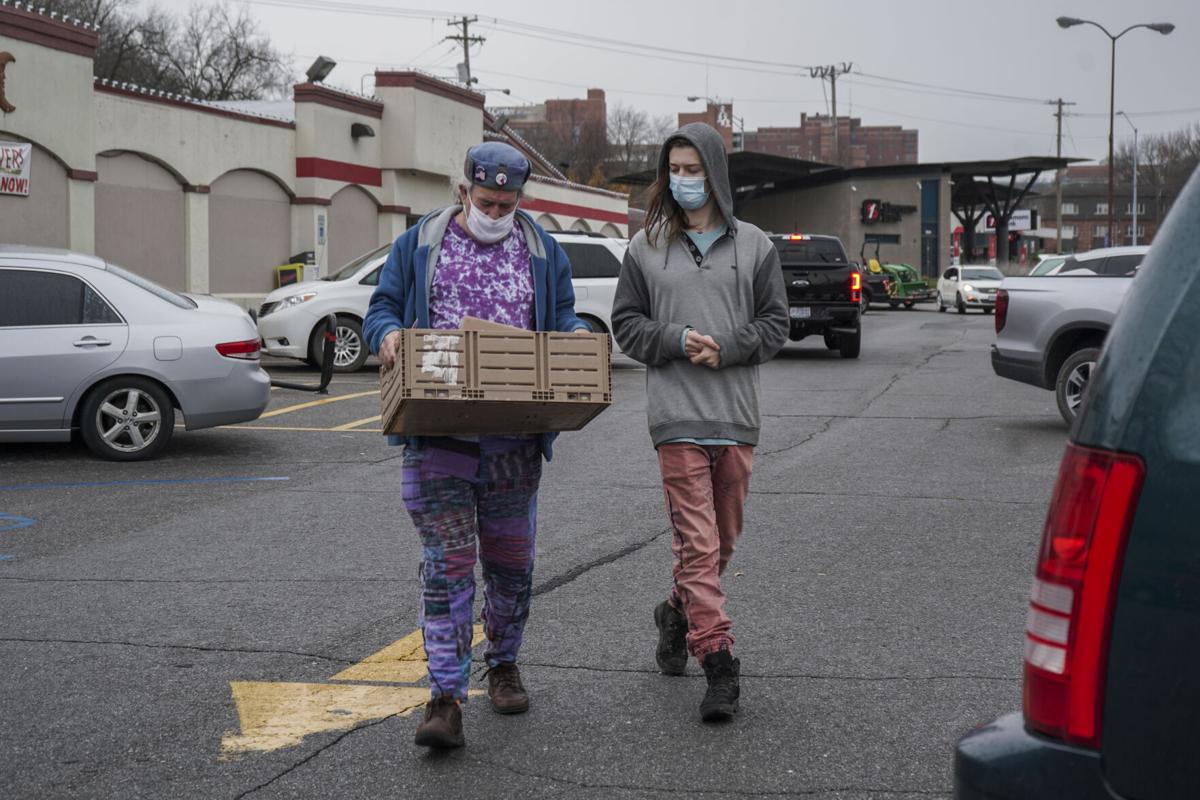 Greyson Miller, right, and Robert Morrison walk to their van after picking up a donation. There are four core volunteers for the local chapter of Food Not Bombs. The group says it only missed one Saturday in three years due to icy weather. 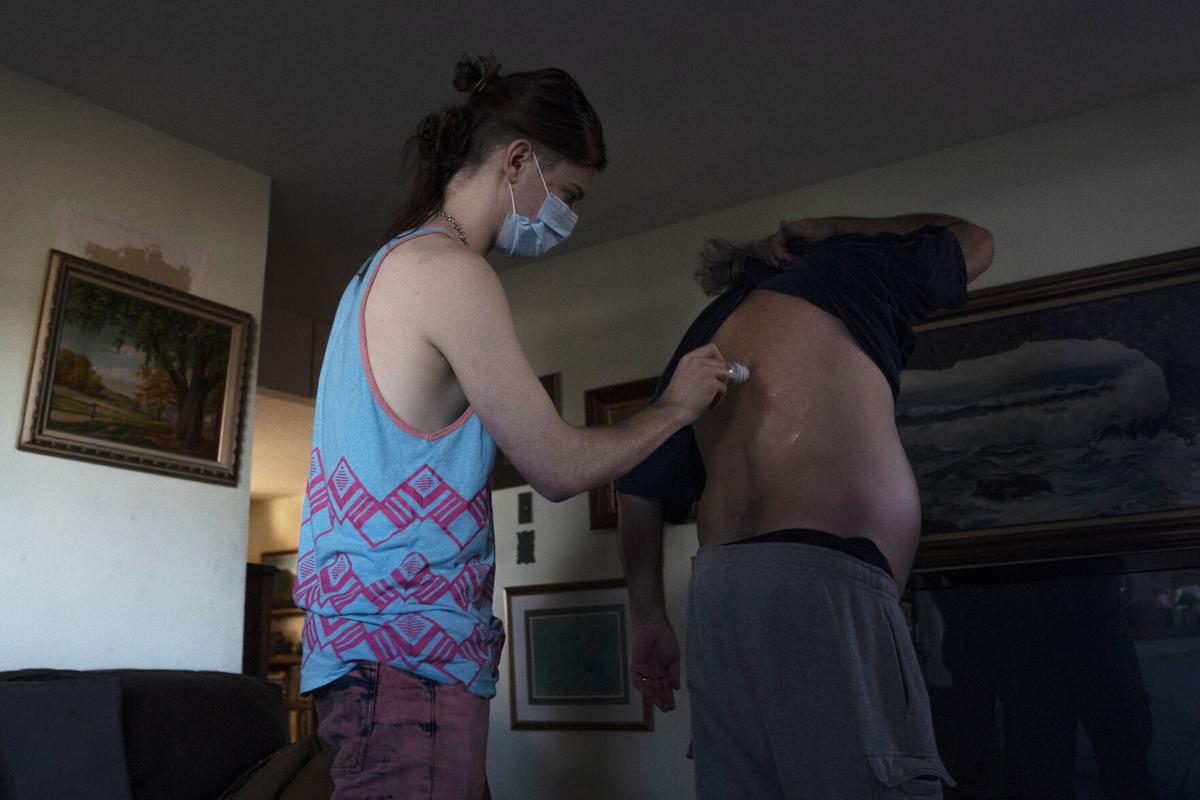 To ease Robert Morrison's a sore back, his housemate Greyson Miller, left, applies pain killer on his back. Morrison says he suffers from increasing back pain from carrying heavy boxes of food. 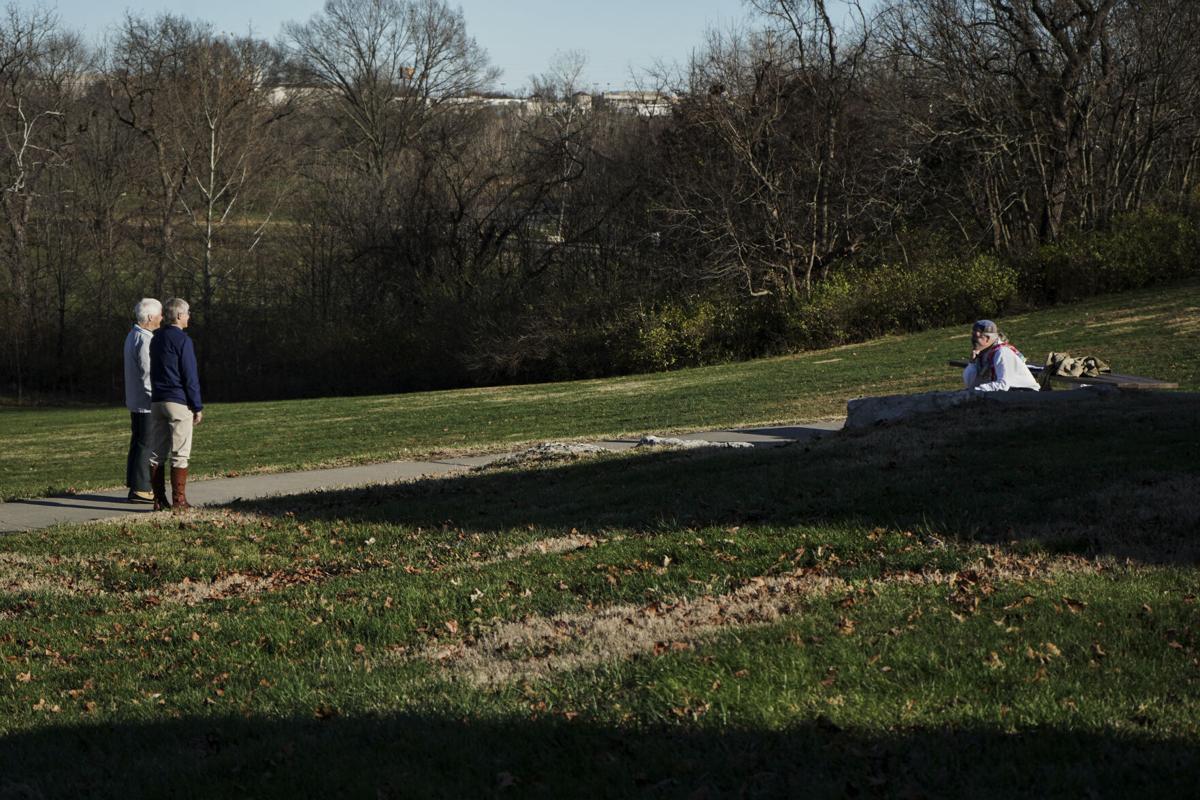 Two friends chat with Robert Morrison from a distance on Thanksgiving in Stephens Lake Park. Morrison originally planned to volunteer at Everybody Eats for the holiday, but he ended up hiking instead. 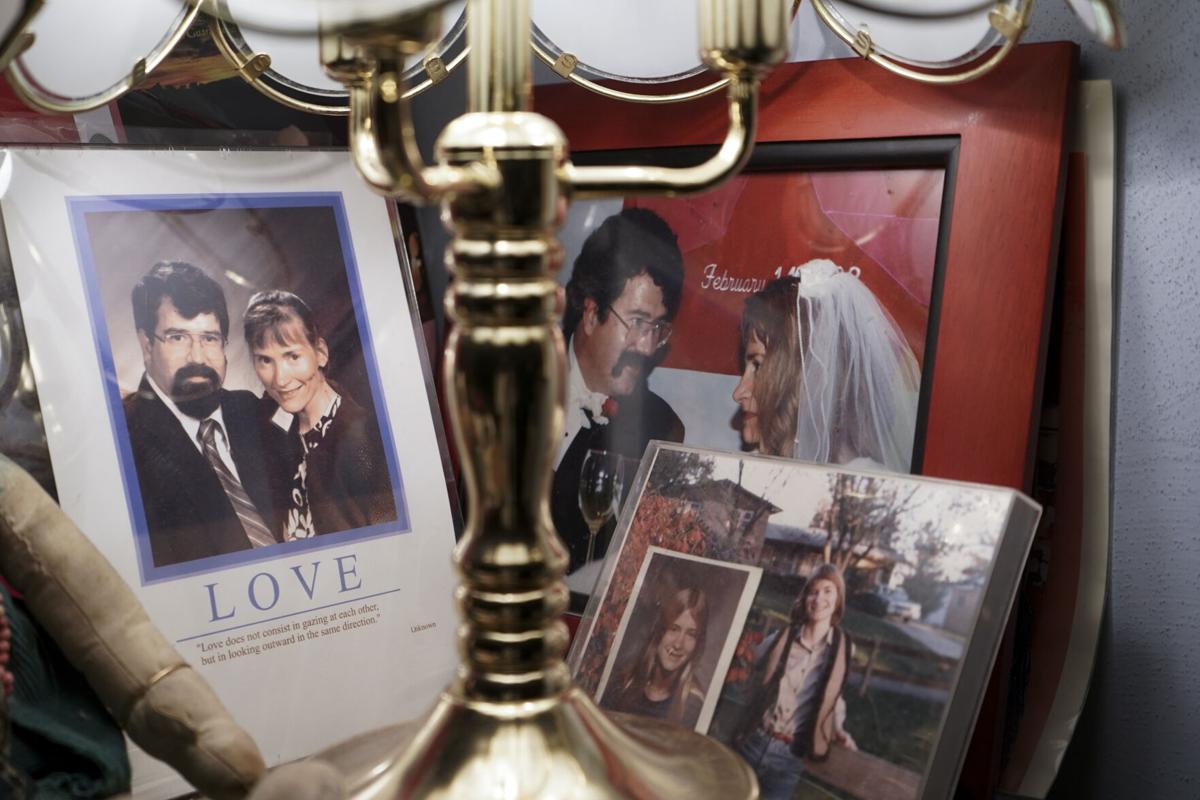 Framed photos of Robert Morrison and Pam Harbour are displayed on a table in Morrison’s bedroom. “I was sure I wanted to spend the rest of my life with her. Even now, I’m still spending my life with her,” Morrison said. 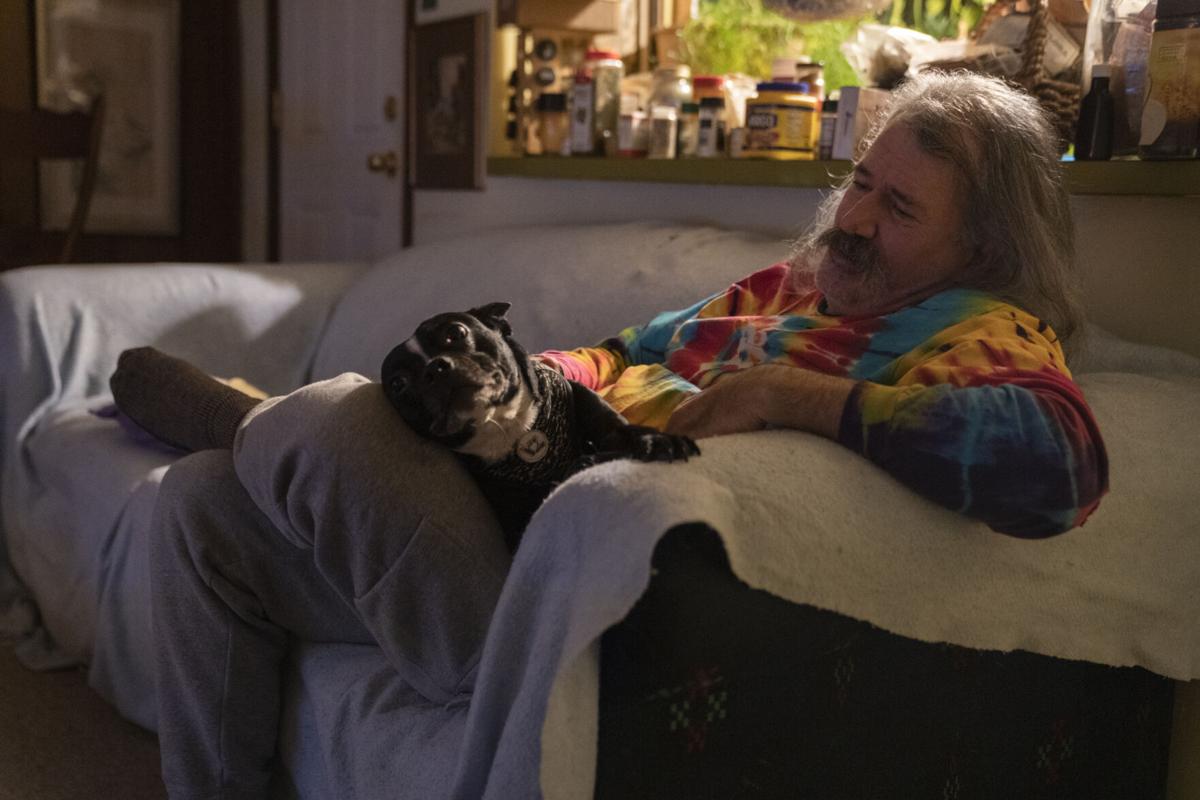 While a movie plays in the background, Robert Morrison pets his housemate's dog, Lucky, in his home. “Home and food are not a privilege,” he said while speaking of his once-homeless housemates. “Everyone deserves them.”

For at least a decade, Robert Morrison has worked with Food Not Bombs, an international, volunteer-based organization that shares free vegan and vegetarian food to protest war, poverty and food waste.

“I believe in feeding people,” Morrison said while twisting his wedding band. “Compared to focusing on one (person), I would like to love everyone.”

His passion for helping others has expanded since his wife, Pam Harbour, lost her life to cancer 15 years ago.

“She fed everybody that came to her,” he said.

Morrison, who hasn’t taken off his wedding band since his wife died, says she is his spirit. She taught him to give to anyone who needs it without wanting anything in return.

He joined Food Not Bombs nine years after her death.

“I love her, so I love people, and I feed people,” said Morrison, who came to Columbia in 1964, the Missourian reported.

After 30 years working a private nurse, his time is now consumed by the initiative.

During the week, he visits various health food shops, farmers markets and grocery stores in “Goldie,” the rickety Chrysler minivan that someone gave to him. At each stop, he collects food on the verge of being dumped into the trash.

After taking the food home, sorting it and compiling what he calls “blessing boxes,” Morrison drives the haul to his corner in downtown for the highlight of his week.

By Saturday afternoon, hundreds of pounds of produce, cans, dry goods and sweets are displayed in a collage of complimentary food for anyone to take.

Even a pandemic couldn’t dampen his determination.

Dutifully wearing his mask, he continues to greet everyone who passes by his spot to browse or pick up food.

Hand sanitizer is provided, so please stop by. He’s certain to be there.

Liu photographed this story as a student in the Picture Story and Photographic Essay class, taught by Associate Professor Jackie Bell. This story was edited by Jacob Moscovitch. Supervising editor is Brian Kratzer (kratzerb@missouri.edu).