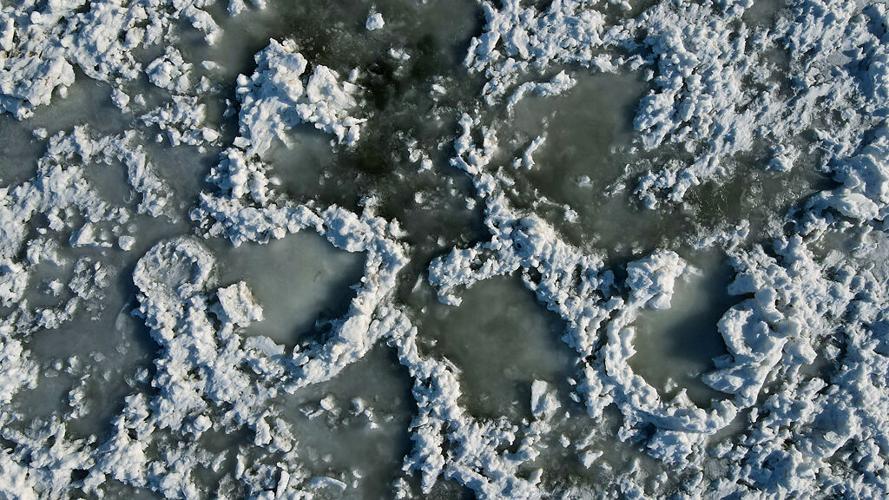 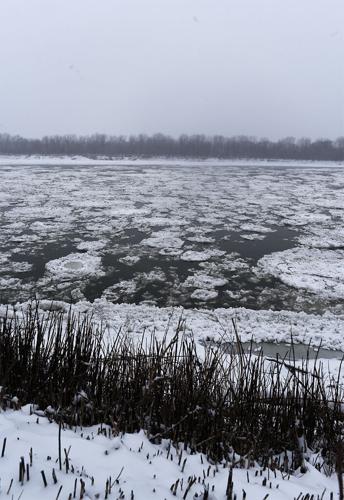 Ice flows down the Missouri River on Monday at Cooper’s Landing in Boone County. The temperature hovered around 0 degrees Fahrenheit with wind chills between minus-15 and minus-30 degrees, according to KOMU weather.

LEFT: Ice chunks collide with the bank of the Missouri River on Monday. The National Weather Service issued a wind chill warning in portions of Central, East-Central and Northeast Missouri and West-Central Illinois. (Trenton Almgren-Davis/Missourian)

RIGHT: Cold fog blankets Fairview Lake on the morning of Dec. 8, 2020, in north Columbia. The city was under a dense fog advisory late the night before and until 10 a.m. that day. (Elizabeth Underwood/Missourian) 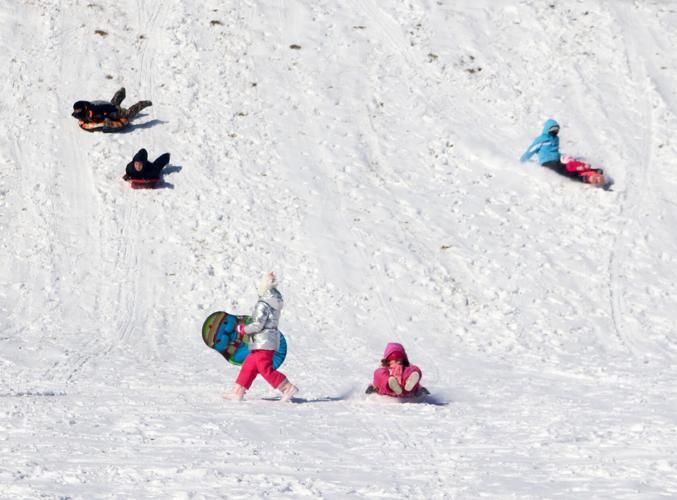 From left, Anna Hatchett, 6, and Maddie McCullar, 6, land at the bottom of a hill Tuesday at Stephens Lake Park in Columbia. 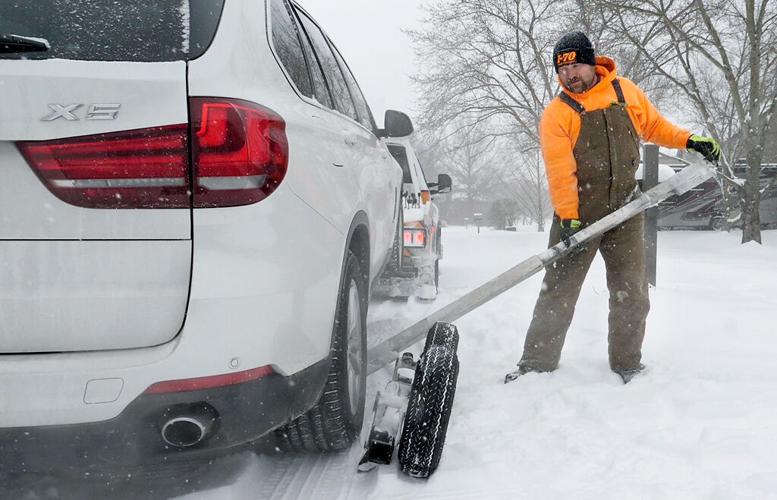 Chad Slate tows a BMW with a dead battery Monday in Columbia. “Towing can get kind of monotonous,” he said. “I prefer to do recoveries.” 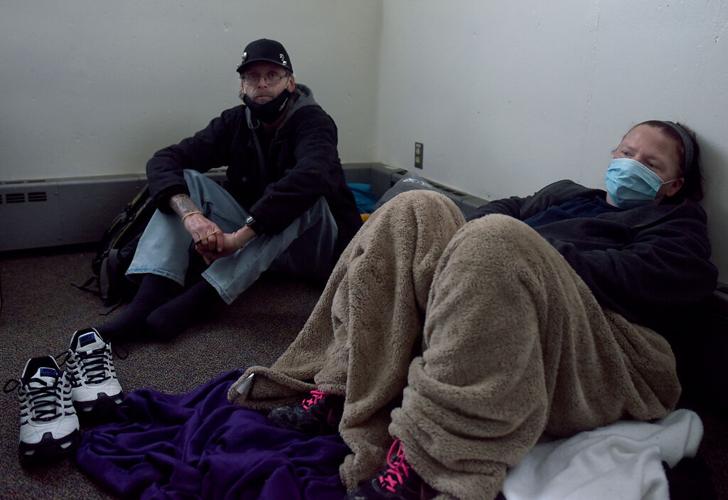 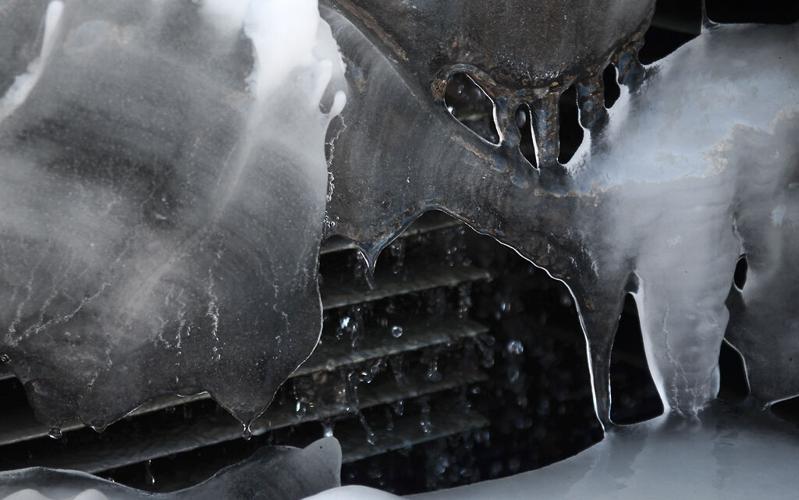 Ice begins to melt off a fountain Friday outside of Central Bank off Broadway in Columbia. According to Kenton Gewecke, KOMU 8 Chief Meteorologist, January's low temperatures made the list of top ten warmest Januaries since 1890. 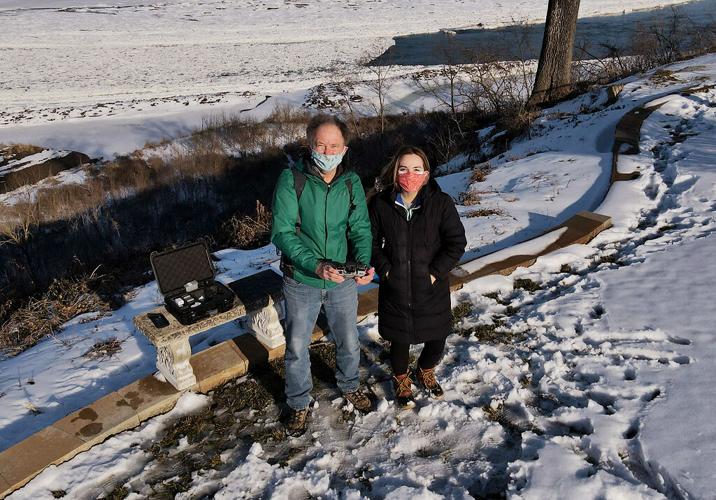 A self-portrait taken with a drone of MU assistant professor Major King, left, and Missourian photo editor Margo Wagner on Saturday on the banks of the Missouri River near Jefferson City.

The Week in Photos takes a deep dive into one story or group of stories from the previous week of Missourian reporting. This week, we're looking at our coverage of Missouri's ice-cold weather, from the river to the roads. The cover photo above was made by Trenton Almgren-Davis.

You know the adage, "If you don't like the weather in Missouri, wait five minutes." Well, it's been two weeks since winter storms began hitting mid-Missouri. The end is only now in sight.

But news doesn't stop because of bad weather. The bad weather became the news. And the Missourian was there to cover it.

Valentine's Day weekend came with a deep freeze. Sunday's low was four degrees, breaking the previous record by 15 degrees. Come Monday, everything was frozen over — including the Missouri River.

Staff photographer Trenton Almgren-Davis drove out to Cooper's Landing on Monday morning to photograph the ice flowing down the river.

"Most people weren't going to be able to get out of their house that day because it wasn't ideal driving conditions," Almgren-Davis said. "My job was to show people what they couldn't see."

Almgren-Davis was using inspiration from another Missourian environmental photographer as he worked. A specific photo from former staff photographer Elizabeth Underwood rattled around his mind.

"I didn't have a white chair to direct the eye, but I was definitely thinking about that photo," Almgren-Davis said.

The low temperature and possible frozen condensation caused his camera to shut down unexpectedly. Once it warmed up, the viewfinder was unusable. He could no longer tell what was in focus, ending his assignment earlier than he had liked. Since then, he has applied for funds to get it repaired.

She'd been sent to Stephens Lake Park to photograph people on the ice. The city had recently declared the lake safe for skating on Tuesday morning. But the lake was still covered in snow and no one was there.

"It was a very hard day for shooting," Smith said. "I was aimless. I didn't even have an intentional goal. And it's not like you could drive around easily to find anything to take pictures of because the roads were so terrible on Tuesday."

She wandered around the lake in search of a good angle when she stumbled upon some people sledding.  These were people interacting with the snow and that was good enough for her.

Cameras are hard to operate with gloves, but without them, her hands grew numb quickly. The brightness of the snow also made the camera's settings near impossible to see.

"When you're on assignment, you don't really have a choice to say, 'I don't really want to take photos,'" Smith said. "It's basically a job. You can't stop halfway through a job."

"I was just really glad I found (people sledding)," Smith said. "The thought of not having any photos for an assignment... kind of scares me. It makes me feel like I've failed a little bit, and I don't like that feeling."

Back in the newsroom, photo editors are busy working on the logistics of helping photographers get into good situations.

As Grace Noteboom was finishing up her work on last Sunday's Valentine's Day project, she was also planning for a micro-documentary on the art of towing. A micro-doc is a usually a video between two and ten minutes long and told through the featured person's voice.

The first tow company she contacted gave her the run-around. The videographer she'd lined up had a scheduling conflict.

But things fell into place. Staff photographer Danielle Pycior hit the road on Monday with Chad Slate, owner of I-70 Towing and Recovery.

Pycior and Slate rode around Columbia for five hours. Pycior interviewed Slate as he drove, filming footage at each stop.

"Over five hours spent with Chad, I actually got to know him, not just through his business," Pycior said. "I really love that about working with sources. Even though I have certain questions that I'm going to ask so I can tell the story at the end — it's also an opportunity to connect with people."

Pycior dropped the footage to Noteboom on Monday evening. Twenty-four hours later, the four-minute video was edited and a photo page was designed for the print edition.

The art of towing in the snow

Some Columbians thrive in the cold while others get bundled up or stay inside. These are relatively easy options for photographers to show.

But what about people who don't have a choice?

The cold weather disproportionately affects the homeless and economically vulnerable populations in Columbia. Organizations around the city have opened warming centers for people to receive food and shelter.

We had been looking for a way to show this. And, after more than a week of planning, the Missourian was allowed inside a center.

Trenton Almgren-Davis went to the warming center at Turning Point on Thursday. He walked around with the organization's director, asking permission to make photos from each person before taking out his camera.

"I couldn't get the authentic moment, so I mostly focused on the portrait," Almgren-Davis said. "I felt it more important to just listen than to be constantly taking pictures."

Almgren-Davis said these photos humanize the weather and who it's affecting.

"The purpose of the organization (is to give people) hope and dignity," Almgren-Davis said.

Homeless in Columbia suffering in extreme cold, despite volunteer efforts

As the cold spell was coming to an, end the challenges of coverage changed. What exactly does "slightly less cold" look like?

The temperature on Friday peaked at 30.4 degrees, according to the weather station at MU's Sanborn Field. It wasn't above freezing, but the sun melted ice around Columbia.

Danielle Pycior was tasked with capturing the phenomenon in photos. She found showing the warmth in the world, while ice and snow still covered the town, to be a challenge.

"With an assignment like this, you have to look at the small details," Pycior said. "It's more of a metaphorical story that you're telling. You have to figure out how to show something that people aren't necessarily looking at...in that way. It forced me to think about the world that way."

"It (the photo gallery) was a product of learning more about how to be a street photographer," Pycior said. "I had some new challenges I hadn't experienced before."

A few miles upriver from Jefferson City, an ice jam formed on the the Missouri River. The jam caused ice to back up for 110 miles. Water levels downstream dropped to record lows. Once the ice breaks, the water levels could increase dramatically.

The best way to cover a story of this magnitude is from up above.

"I heard (the words) 'drone footage' and 'Missouri River,' and I was hooked," photo editor Margo Wagner said.

Wagner and assistant professor Major King planned to fly a drone above the river. Piloting a drone requires extra levels of responsibility. King had to understand the potential encroachment onto private land as well as airspace regulations from the Jefferson City airport and capitol building. This affected where they could fly.

As luck would have it, Wagner worked on a story last year about the effects of flooding on communities in the river bottoms. She used her connections to find a place to photograph.

Wagner doesn't have a license to fly a drone, but unlicensed pilots are allowed to fly under the supervision of a licensed pilot. King, the instructor for the Missouri School of Journalism's drone program, has hundreds of hours of experience. Both King's and Wagner's drone photos were published on Saturday.

"It's actually kind of disorienting," Wagner said. "The location where we were was higher than we were flying the drone. Typically, when you're flying a drone, the drone is higher than you are... But I never could have gotten up close or shot the photos I did with just me and my camera."